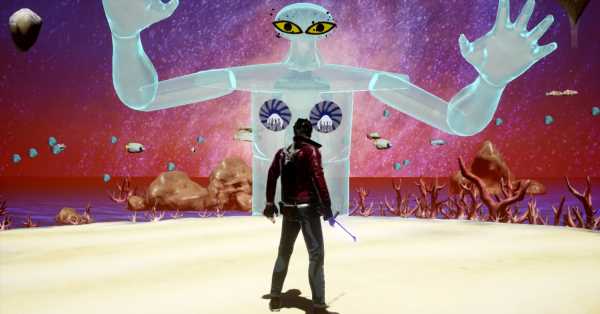 The No More Heroes series has no shortage of weird boss battles. In its latest installment, No More Heroes 3, players take part in a life-or-death musical chairs match, a combat encounter that has mechanics ripped from an MMO, and even a first-person horror game segment.

Most of these boss fights feel like homages or spoofs on different genres of games. However, there’s one fight in particular that not only pays its respects — it shatters the genre in the progress. In a series that’s so focused on over-the-top action, what happens when the adrenaline-fueled main character has to slow down his battle tactics to match the snail’s pace of a JRPG?

[Spoiler alert: This story explains the mechanics and solution to a late-game boss battle in No More Heroes 3.]

After seven intense and absurd battles through a rogues’ gallery of intergalactic criminals, you have to fight the third-ranked assassin in the universe: a monster called Sonic Juice.

Sonic Juice in his suit next to normal-sized characters
Image: Grasshopper Manufacture via Polygon

This villain is a tall and muscular alien in a skintight jumpsuit adorned with clouds. That alone would make him an imposing figure to fight. However, in battle, Sonic Juice hangs out in a massive and translucent suit of armor that somehow makes him seem even more alien.

His introduction would be more menacing if the villain wasn’t so mellow. He casually chats with the game’s main antagonist, Prince FU, like old friends, shrugs off deadly threats from his cohorts, and his choice of battlegrounds looks like a Lisa Frank binder.

Sonic Juice continues to downplay his threat level when you finally meet him in his battle arena. It takes him several minutes to even walk over to meet you. By the time he gets to you, he isn’t even interested in fighting. When he finally does concede to combat, he refuses to cross swords in the style of an action game. Instead, he forces you to play by his rules: through turn-based combat.

This change in tempo completely slams the brakes on the previous dozen hours of gameplay. Nearly every fight in the game up until this point was decided by slamming buttons on my Joy-Cons until I eventually cleaved my target in two. However, this battle near the tail end of the game makes me carefully choose my attacks through a two-tone menu like a classic Final Fantasy game.

My summoning spells do absolutely nothing
Image: Grasshopper Manufacture via Polygon

As the fight begins, I choose commands from a menu like attacking, using magic, summoning powerful allies, and using items. As the battle progresses, I notice nothing seems to work as I imagined.

My attacks with my otherwise-deadly Beam Katana are barely hurting the boss. I can’t use my arsenal of magic spells because Travis actually doesn’t have any magic points to cast them. Every time I try to summon a companion to aid me in battle, the text on screen mentions some difficulties they are experiencing that are forcing them to disregard my calls for help. My enemy, on the other hand, being a JRPG aficionado, can harm me. The only thing I can do is heal myself with the limited amount of herbs in my inventory.

Throughout all the fights in the No More Heroes series, this is the first time that Travis Touchdown’s penchant for violence accomplishes nothing. There’s nothing I can do to harm the boss if I choose to fight like this.

To win, I have to break the game’s rules.

Instead of attacking the boss, what if I attacked the game menus?
Image: Grasshopper Manufacture via Polygon

I eventually discover that selecting the boss as my target is not the answer. I have to attack the game itself. It doesn’t take me long to realize that the windows on the screen can also be targeted. I have to destroy the very idea of JRPG mechanics.

With the windows destroyed, the fight against Sonic Juice can now be fought on my terms.

I found this revelation to be the high point of No More Heroes 3. This sort of absurd, stylish, outside-the-box thinking is what makes each of the boss encounters feel so fresh. This never-ending series of wild concepts has kept the franchise from going stale since the first No More Heroes in 2007.

Some of the best moments in this game completely blindsided me because each defied expectations. Except for the very last boss fight — which I won’t spoil — Sonic Juice’s forced genre-switch battle is the best moment in the game. While other boss fights borrowed from other genres to remix gameplay concepts, Sonic Juice’s fight borrowed from, then obliterated a beloved genre of video games.