Earlier this week, Pokémon Sword and Shield producer Junichi Masuda logged on to Twitter to thank fans for their nice messages. It was his birthday, and people were sending him all sorts of things, from photographs to fan art. But nestled amongst these celebratory messages was a new onslaught of critiques and demands from angry fans who disapproved of Game Freak’s expansion plans for the Nintendo Switch exclusive.

One fan responded to a birthday tweet by asking Masuda to explain why, in their view, Game Freak had “removed” old creatures from the games, only to charge for them in the upcoming expansion pass. In actuality, you don’t need to buy anything to get old creatures into your games. You just have to trade for them. Of course, expecting Masuda to explain this when Game Freak has been clear about what’s possible is ludicrous. 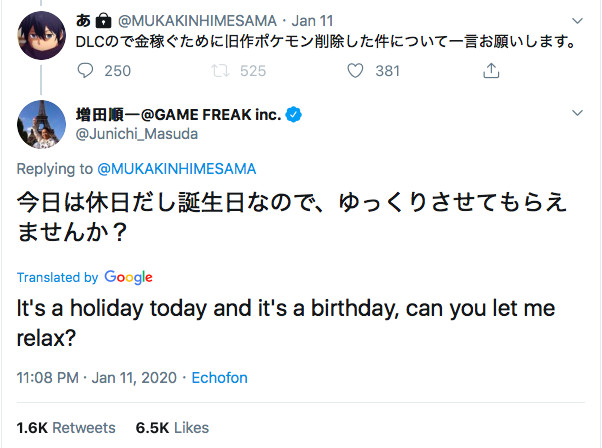 But he did respond with a short tweet that has now gone viral on social media and on news sites. “It’s a holiday today and it’s a birthday, can you let me relax?” Masuda asked. The fan simply told Masuda that they’d get back to it later. Rather than galvanizing fans into giving the man a break for at least a day, many of the top responses strike a similar vein as the initial complaint. There’s the familiar #bringbacknationaldex hashtag, sitting between various other jabs and retorts. “If we give this man another chance he will just make even more bs excuses to cut content again,” one tweet reads.

The conspiracy theory that expansions are actually content cut from the original release of a game is hardly unique to Pokémon, but given that the franchise has never had expansions before, it’s the first time that video game fans can apply it to pocket monsters. While it’s hard to say what motivated Game Freak to go this route, many developers opt for expansions to develop ideas that didn’t fit into the scope of the original game given constraints like set release dates. Expansions can also ensure that developers can continue to have jobs after a game is shipped, rather than being mercilessly laid off.

By now the anger surrounding Pokémon Sword and Shield’s limited Pokédex is well-documented. It’s one you’d think would disappear once Game Freak announced that expansions bring with it 200 additional monsters, along with new features like a co-op mode, and entirely new areas and characters. The hardcore fans are technically getting what they want: more Pokémon. But the new fury is that there are any expansions at all — essentially, that people “have to” pay extra money to get new content.

It’s a hilarious reaction, given that in the past, Game Freak opted for a third version of each generation which, historically speaking, often don’t add much that’s new or worth playing through again. Now that the developer is finally getting with the times through DLC and expansions that add meaningful content, it’s somehow still not enough. The goalpost continues to move.

In some ways, it’s not really about “Dexit,” though that brand of frustration will likely not disappear until the full compendium comes back. I’ve said this before, but the anger is more about Game Freak itself, and the overarching fear that, perhaps, the mid-sized developer is no longer fit to be a steward of such a big franchise. The narrative that continues to plague the Japanese studio is that it’s lazy, or at least careless, and this idea manifests itself well beyond the Dexit controversy.

Thanks to data miners, fans can now purport to look at the code. For instance, fans swear that while Game Freak has released specific odds for encountering shiny Pokémon, the actual function doesn’t work as advertised when the player “chains” 500 encounters in the hopes of increasing their rare encounter rates. Instead, players believe that the rates remain the same.

For hardcore players, having basic battle functions restored is a matter of competitive integrity, not entitlement. But it is also ammo for people who are convinced that Game Freak is driven by greed, rather than the desire to make a good, complete game that is somehow free of all flaws. This may explain why some people are convinced you “have” to pay more to get all the Pokémon, or to have bugs fixed. The reality — that Game Freak does indeed patch its games for free from time to time, and that the studio isn’t gating the old compendium — doesn’t matter in the face of the set false narrative, which insists that Game Freak shouldn’t handle Pokémon anymore.

But for every fan that has lost its faith in Game Freak, there are just as many players (if not more) who are looking to the expansions with excitement. There’s a Pokémon with a motherflippin’ gun now. Maybe the new Slowpoke will turn into some kind of phantom of the opera? Dexit is less of a fandom-wide crisis than it is a distant din that, while still omnipresent, cannot overshadow the fact that Pokémon as a franchise is in a pretty good place right now, with Sword and Shield even breaking sales records.