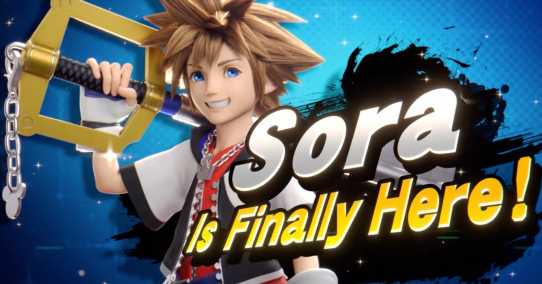 The revelation that Sora, from Square Enix’s Kingdom Hearts series, is the 82nd and final Super Smash Bros. Ultimate fighter brings a bittersweet closure to a Smash community event from more than six years ago.

Introducing Sora on Tuesday, Smash Bros. game director Masahiro Sakurai recalled this community poll, which ran from April to October of 2015. Fans voted in a completely open-ended ballot for the video game character — regardless of franchise — they wanted to see most in Super Smash Bros. for Wii U and 3DS. But Sakurai never revealed who won the voting.

Well, today’s reveal event also brings the answer: Sora, of course. But back in 2015, Sakurai consulted with the late Satoru Iwata, the Nintendo chief executive who died that July, after it became clear that Square Enix’s character was the runaway fan favorite. “For the fighters at the top of the list, we thought that some people might demand them from the respective game companies,” Sakurai explained. “We believed that this would cause some inconvenience to many parties.

We rank the Smash Bros. (and friends)

“We’re sorry that we were not able to reveal the results,” Sakurai said. “But now, after a long time, we were able to connect it to the result we have today.”

Sakurai said Sora’s inclusion “was a huge undertaking, but one that everyone involved was excited to take on.” Later in Tuesday’s broadcast, he summarized the three-year Super Smash Bros. Ultimate run, in which more than 2,200 characters (if you’re counting all the non-playable characters, stage guest cameos, and the like) made appearances.

“I think this is unprecedented territory for a game collaboration,” Sakurai said. “Every single fighter has their own developer, stakeholder, game world, and fans. Being entrusted to develop a game using those fighters has been a special experience and a true honor.”