The Arma series is best known for being a high-end military simulation, but it’s also the birthplace of survival multiplayer games, a genre which used to be more about sneaking around in the woods than flossing and unlocking weapon skins. Now, more than five years after the launch of Arma 3, the team at Bohemia Interactive is introducing extraterrestrials to the franchise for the first time.

Arma 3 Contact is the most fun I’ve had in an Arma game in ages, and it works by putting the emphasis back on stealth, map reading, and overland maneuvers. But the learning curve is steep, and the experience itself is a little rough.

Booting up Contact, I find myself dropped into the middle of what appears to be a combat patrol. All of my senses are on alert as my team moves through a forest, engaging similarly-equipped light infantry at range. But that is all just a clever narrative misdirection.

As it turns out, I’m actually participating in a joint military exercise between NATO forces and a fictional Eastern European country called Livonia. What initially feels like combat turns out to be a woodland game of laser tag.

After that light opening, however, all hell breaks loose when an aerial drone under my command goes off course and a bomb explodes inside my military camp. I’m promptly reassigned from the fun work of running war games to driving a load of my comrade’s feces to the dump. This is when one of my fellow soldiers — who is a criminal forced to go into the military to avoid jail time — convinces me to sneak into the fictional territory of Livonia to clear my name.

The scenario itself is preposterous, as are the reactions of practically every non-player character and fictional government agency involved. But it’s all just a convoluted way to get to the aliens.

Four missions in and I still haven’t actually seen any little green men, however. So far it’s just been their spaceships, which dart around the sky and levitate large, random objects. It’s a bit of a tease.

What I have seen a lot of is Livonia, the massive new 163-square-kilometer chunk of real estate that shipped with the DLC. Like every other map that Bohemia produces, it’s gorgeous. It’s just not the daring, tropical departure that arrived with the Apex expansion in 2016. Livonia is more like a callback to the previously-released, 225-square-kilometer Chernarus map made famous by DayZ; less a brand-new addition, more a tribute to what’s worked well in the past.

Contact is an entirely single-player experience. My only companion as I traipse around the Livonian woods is a hand-held gadget called a Spectrum Device. It looks like a metal detector combined with a divining rod.

With it, I’m able to both send and receive radio signals all across the spectrum. That means if I can zero in on an enemy unit’s transmissions, I can identify it based on its unique radio signature. This makes the random AI units in the woods a lot less random. They each have a name and, with a working knowledge of their radio protocols, I can confuse and redirect them at will. I can clear a path for myself north through hostile territory without ever firing a shot by ordering Echo team to move east and Bravo team to move west.

Later, I use the same Spectrum Device to talk to the little green men. It’s all part of a slowly unfolding first-contact scenario, complete with over-educated scientists piping up on the radio to warn me about biological contamination. Contact is a lot more playful than the previous single-player entries in the Arma franchise. The over-the-top machismo is still overbearing at times, but the main characters are well-voiced and tend toward the humorous rather than being outright ridiculous.

About four hours in, though, and the aliens themselves are entirely without personality. They prefer to broadcast weird bleeps and bloops from the far side of spooky rocks, which I then pick up with my Spectrum Device. Their ships take off again if I get too close, and fire down at me as they fly away. 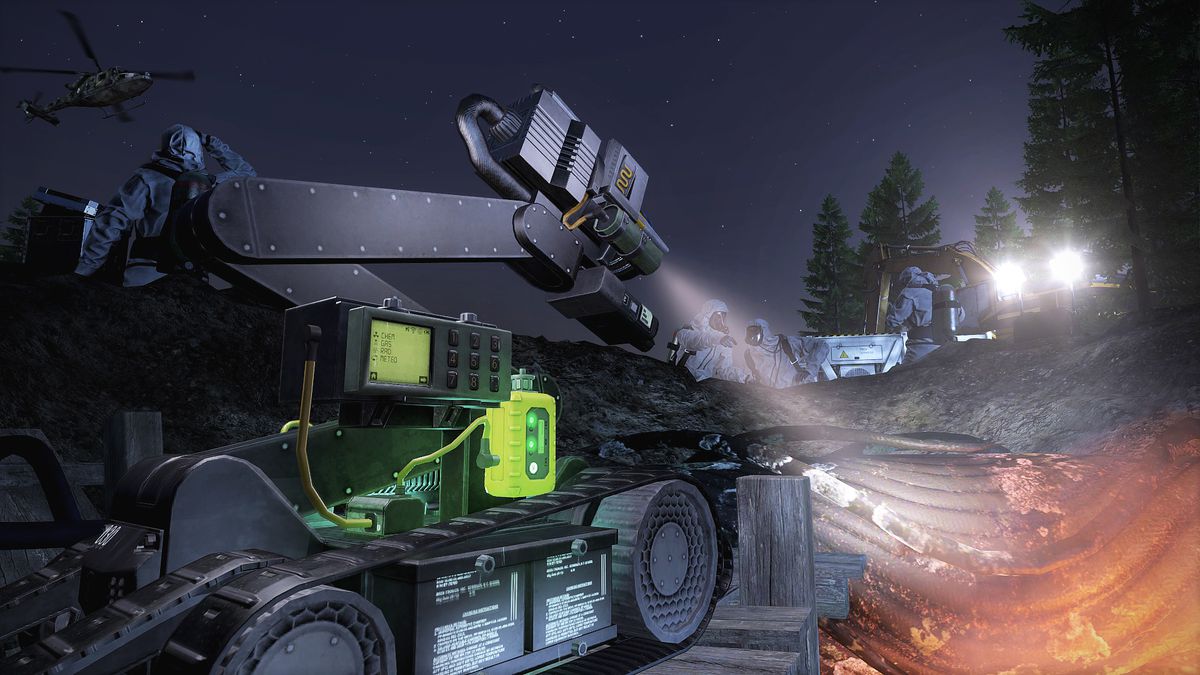 I’ve spent quite some time driving around a wheeled drone in Arma 3 Contact. Those missions are actually a lot of fun, and require that you develop a different set of skills in addition to the game’s traditional methodical gunplay.
Bohemia Interactive

It’s a shame that nothing about communicating with the aliens is explained very well. Part of that is by design; Bohemia clearly wants any kind of contact to feel tentative and scary at first.

But the details of the Spectrum Device also aren’t made terribly clear by the game’s user interface. Contact’s whole tutorial seems a little shaky, in fact, with long pauses between some sections. In-game triggers and gates will sometimes misfire as well, which ruins some of the pacing. I re-play the first few hours of the DLC several times to make sense of it all, and the wonkiness blunts the impact of being the first human to make contact with alien life.

Contact doesn’t run very smoothly in general. Even on my brand-new gaming laptop (I sort of broke the other one) with an Intel i7-8750H, an Nvidia RTX 2060 mobile, 32 GB of RAM, and solid state drives the frame rate still dips substantially when I wander too close to a populated village.

I want to believe

Where Contact excels, however, is in building up tension. I’m perhaps halfway through and all of the action so far has occurred at night, under a full moon. An early story beat has the extraterrestrials knock out all of the electronic doo-dads on the battlefield, so there’s no night vision this or thermal to provide anyone any intelligence about what’s going on.

The combat feels much more basic and brutal than the most recent Arma releases, almost like a throwback to those early days spent exploring in DayZ, when I was never quite sure who or what was over the next rise. 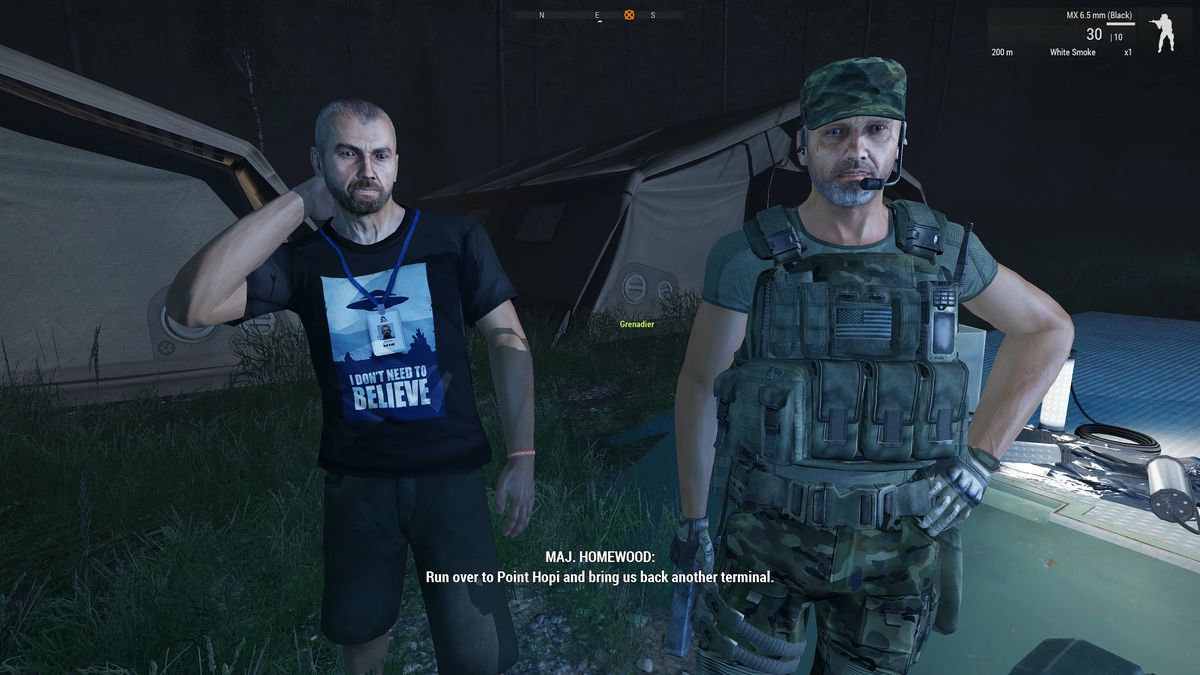 Engagement distances are extremely close, within 200 yards or less. That also means that visually identifying enemy forces is important. Telling the difference between a group of locals out looting and a team of heavily-armed Livonian infantry before they can see you is the only way to stay alive.

Is this a good entry point into the Arma series for new players? Absolutely not. There are more rough edges here than you’re likely to find in your standard first-person military shooter. But, if you’ve already played a lot of Arma 3 like I have, Contact is a hell of a lot of fun to mess around with. I’m also excited to see what new capabilities the aliens have, when and if I actually come face to face with them.

More than anything, it’s nice to see Bohemia not taking itself too seriously and having fun experimenting with new ideas. So many great experiences — games like DayZ and PlayerUnknown’s Battlegrounds — have been spun out of the Arma series, here’s hoping that the platform’s own developers go with their gut here, continue to loosen up a bit, and get a little momentum going with their out-of-this-world experiment.