The Sims 4’s new expansion pack, Realm of Magic, has a compelling premise. What if your Sims, who are usually worried about mundane concerns like getting a promotion or raising their kids, could focus on more magical pursuits? What if Sims could ruin a rival’s career by zapping their electronics, brew powerful potion, and disappear to a Hogwarts style academy to meet fellow witches and wizards?

My first run through with the new The Sims 4 character type, spellcasters, was less than magical.

I spent a long time carefully crafting a witch, Ravenna Ebenlocke, and her cat Burger. Ravenna was a little hungry after I filled their home with furniture and created a witch’s paradise, so I went to cook up some eggs.

I had not purchased a fire alarm, and so Ravenna died in a fiery blaze. I had to reload and rebuild, and this time I forgot to put a door on the bathroom. Ravenna peed herself in the middle of a poor magic lesson and died of embarrassment.

The more things change in The Sims, the more they stay the same.

Realm of Magic more than delivers on the flash and excitement of playing a spellcaster. Early on, it’s exciting to start a Sim who’s focused entirely on magic and potions. The glitz wears off over time, though.

Realm of Magic slips when it comes to more complex systems that define a Sim’s day-to-day life, and its vast array of powers feels disconnected and even antithetical to the rest of a Sim’s life.

As with the rest of The Sims 4, Realm of Magic can be either purchased alone as an addition to the base game, or a player can purchase multiple pieces of DLC from the package to add new layers of interlocking content. A player with Island Living, Get Famous, and Realm of Magic can create a witch who lives on an island paradise and dates a mermaid while she pursues her career as a world-famous actress and raises three kids. Which, of course, is fabulous.

Realm of Magic as a standalone expansion, however, focuses entirely on spells. Players can either convert a normal Sim to a spellcaster, or create one from scratch. Magical Sims have the same needs to manage as a regular Sim; they’re not like the in-game vampires, who have a different set of biological needs to manage. Eternal life has some downsides, but not having to pee is always a plus.

Instead, magical Sims get to build up their magical expertise, and unlock new spells from three distinct trees. Untamed magic allows Sims to zap items or start fires from afar, while practical magic magically repairs items around the house or copies items. Mischief magic is the best designed tree, as it focuses more on social spells and ways to mess with other Sims instead of focusing on ways to enhance your own characters. It’s an enjoyable path to walk.

And there’s a lot to dig into at first. Sims have to grind magical power by training, brewing, and learning from teachers in the Magical Realm academy. Then, they can spend talents in multiple trees to become more efficient and streamline their training and casting experiences. Over time, Sims fill out a spell book and learn more potions.

Here’s where the trouble starts. The spellcaster system is similar to the vampire system, but the vampire system comes with serious drawbacks. Vampire Sims can’t go out during the day and must feed their hunger through inconvenient means. As vampires grow more powerful, they also take on negative traits.

Spellcasters can occasionally get cursed, and they have to manage a Charge system that stacks with every spell… but neither of these things meaningfully change the game. Charge causes spells to fail and can even have lethal consequences, but it can also dissipate and be slowly negated through spellcaster advancement. 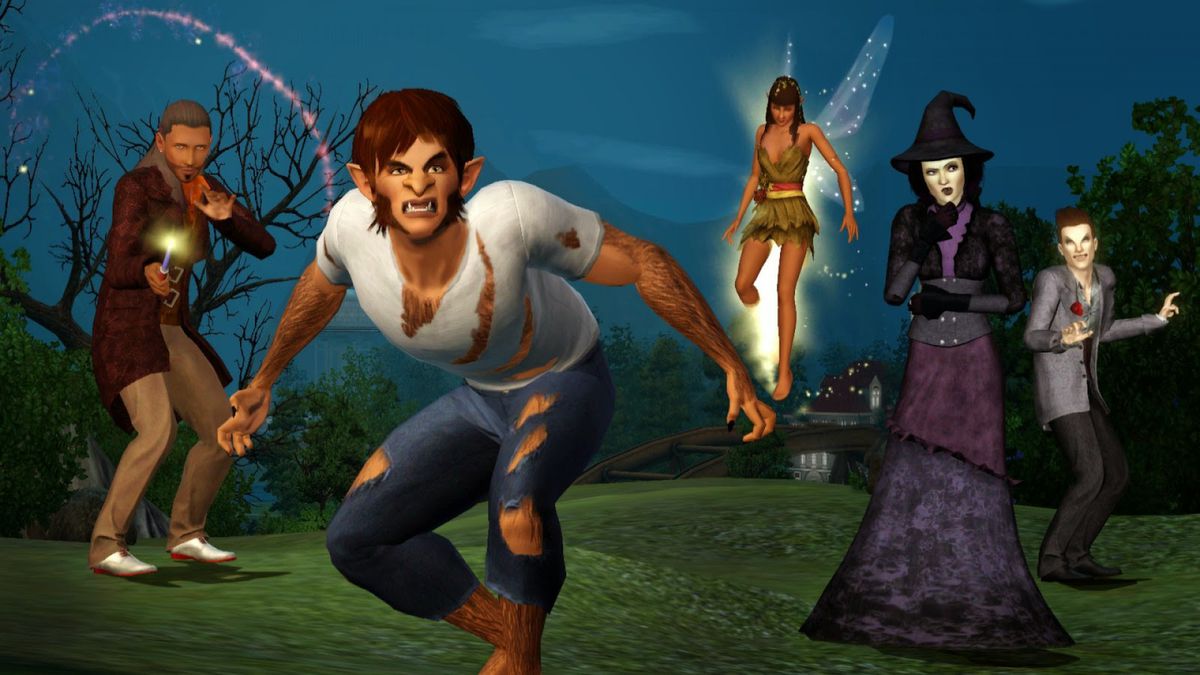 The benefits of being a spellcaster also negate many of the challenges of The Sims 4’s base game. I worked hard to satisfy my Sim and purchase a money tree with the reward points… and found I could simply copy paste money trees with magic, creating a powerful influx of money. One of the earliest potion satisfies all of my Sims’ needs, so I never have to worry about my bladder or hunger if I have a few on hand.

These things are fun, but they also start to feel like cheat codes.

Before long, Ravenna Ebonlocke is unstoppable. Going to a magical realm and hanging out with my peers is fun, and I enjoy using the magical benefits to build a strong social network and become a master painter who is also in amazing physical shape.

The allure of that fades, though, because The Sims 4 is a game about social stories. I love the stories of my Sims with their families and the neighborhood around them. Realm of Magic focuses more on a small cast of characters in the Realm of Magic, and providing a power fantasy for my Sim.

But too much power isn’t necessarily a good thing — so far, my most memorable experience has been burning to death because I forgot how to make eggs. The biggest change in Realm of Magic for many fans is getting more staircase customization and control options, allowing them to build pleasant little houses, but that has nothing to do with the package’s theme.

For many fans, The Sims 4 isn’t about having unlimited power. It’s about creating a perfect little domestic life, hurdles and all. Having resistance in the world of the Sims, especially via social consequences from other Sims, is part of what makes the game sing.

Realm of Magic is powerful and versatile, but ultimately, it feels less fun. It’s a fantastic pack to play around in, and I’ll likely return to it organically at some point as I build up a multi-generational family.

As a sole pursuit in a game of The Sims 4, however, this power fantasy is capable of automating and trivializing much of the game. Realm of Magic works best in small doses, but much of the content makes the base game less enjoyable, not more.

Realm of Magic is out now on Sept. 10 on PC, and Oct. 15 on Xbox One and PlayStation 4. The game was reviewed using a final “retail” download code provided by Electronic Arts. You can find additional information about Polygon’s ethics policy here.