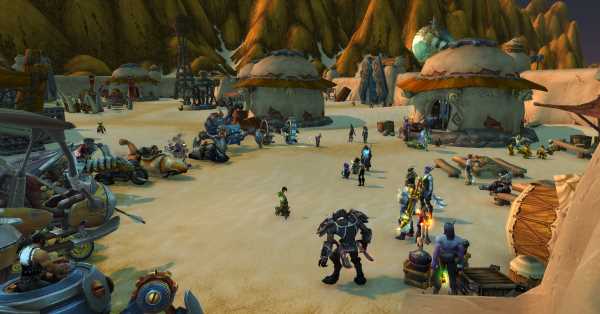 Lots of interesting content is in the pipeline for World of Warcraft’s current expansion, Shadowlands, but some fans are less interested in the mysteries of the cosmic plane of death and much more invested in getting ready for a sick racing tournament. A group of roleplayers are setting up a big event, and there’s no combat or deep lore involved — just the love of going fast and causing havoc.

The Crashcog Cup is entirely run, promoted, and pulled off by players, with no interference or structure provided by Blizzard. Every race is done through round-based D20, where every racer rolls to determine their current speed, and the DM compounds these totals to find the highest ‘speed-score.’ Making things more complicated is an obstacle table, which randomly tosses in encounters for players to work around, like monsters spawning on the track or a rival player pulling off a trick. At the end of the tournament, all of the scores from all of the races are tallied up and a winner is crowned.

Blizzard doesn’t have an official racing mode or structure built into World of Warcraft, so players have created their own systems to mimic these on the fly with dice. The end result is an improv flash mob; the racers are moving constantly, and DMs and their assistants have to jump on the track and create dynamic events. For the audience, it’s like going to Medieval Times. Sure, the battle isn’t real, but you’re getting a show.

Kitche Q. Goldwatt is the organizer of the Crashcog Cup, and he’s backed up by a squad of volunteers and assistants. There will be live commentators at the event, controlled by players who keep the audience up to date on what’s happening. Other fans will control vendors in the stands, selling their wares, which range from snacks and fan merchandise to arcane goods and trinkets. There are also a host of performers for entertainment, medics for emergencies, and a bookmaker in case anyone feels like making some bets.

There needs to be a few workarounds to get past parts of World of Warcraft that make roleplaying a little tricky. For instance, members of the Horde and Alliance speak different in-game languages, making cross-faction communication normally impossible. A few characters, like pandaren and void elves, can act as translators across a faction thanks to their specific race’s language. But it’s much easier for everyone to chug a magical Elixir of Tongues to remove the barrier entirely. The event also brings people from both Moon Guard and Wymrest Accord together, and so certain players field whispers and manually invite people to their instance of the server if necessary.

While registration is closed for participation in the events, the attendance stands are open to any player on a North American roleplay server who wishes to watch. The Cup takes place over the course of six weeks, giving people multiple chances to show up and meet other characters. All events start at 8:30 p.m. EDT.

When it comes to roleplaying in a MMORPG, one of the biggest hurdles is convincing people to show up. Goldwatt and his assistants have created a unique and cool opportunity for players to mingle that goes beyond just drinking in a bar or waiting on a battlefront. Instead, this is a more vibrant and calm opportunity, free of the usual war and murder that makes up the World of Warcraft canon. The Cup will continue to grow, and future seasons will likely include ways to reward certain vehicles and racers who come prepared with the right concept and mount.