World of Warcraft’s latest expansion, Battle for Azeroth, has been a controversial addition to the 14-year-old MMO. Following on the successful Legion expansion, Battle for Azeroth has gone from world shattering threats and demons to a faction war between the Horde and Alliance. The big moments in the expansion, like raiding through Uldir and Dazar’Alor, or the spectacle of cutscenes and cinematic — have been executed well. But a game like World of Warcraft demands constant attention, and must hold up to players logging in daily.

Battle for Azeroth’s big moments are more sophisticated than ever, with in-game cinematics, branching player choices, and a steady flow of new player races joining the game. While there’s plenty to talk about around these highlights, player criticism has largely focused on the connective tissue of the game. Warfronts, island expeditions, and daily quests are meant to bring players back to Azeroth every day, but are they succeeding at that goal?

What works about the end game?

“I think the strengths of the systems, as it is on live, is that there are lots of different activities that are valid for players to do,” says Kevin Martens, lead game designer on World of Warcraft. “There have been times in WoW’s past where raiding was the only thing to do, or self-driven collecting games, or leveling alts. Now, we have a lot more variety, and even if you’re chasing specific goals, there’s typically more than one way to do that.”

“Dungeons and raiding have a rich experience [in Battle for Azeroth],” says Martens.

Martens also says that players have been receptive to the changes made to Island Expeditions. Making rewards more visible and less rare, as well as making them more accessible through a vendor, reignited interest in the system. Martens confirms new islands will be coming, even after the two new additions in the upcoming 8.2 patch, Rise of Azshara. 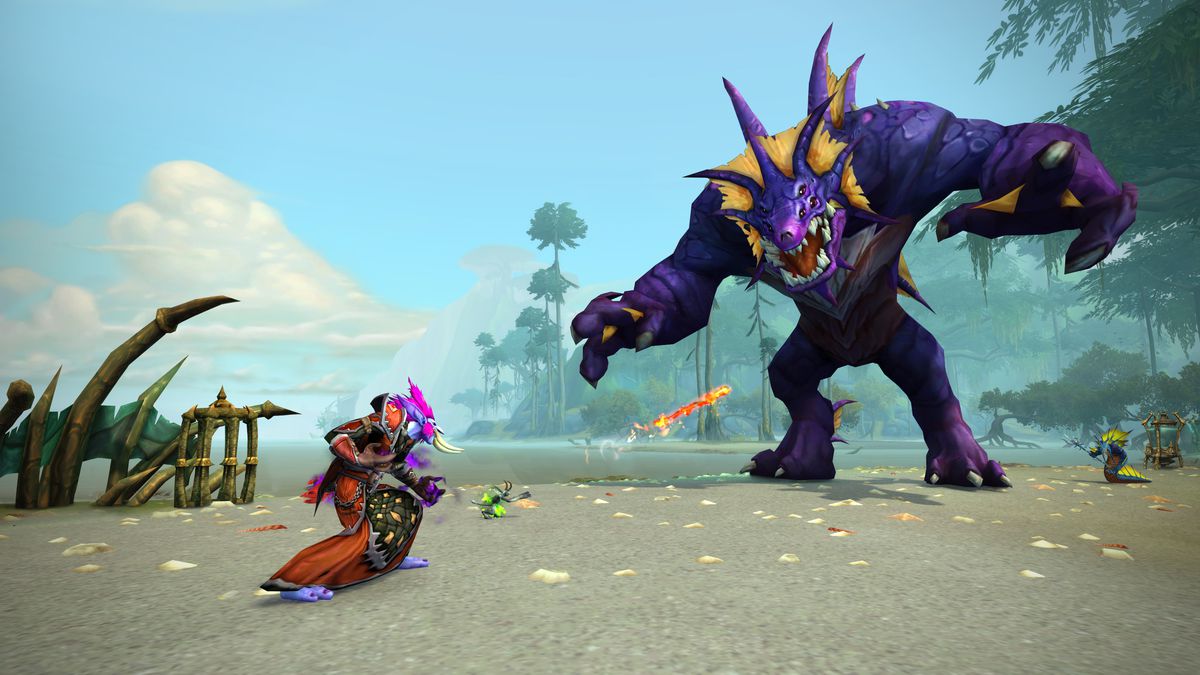 Island expeditions have also been a way for Blizzard to return to locations and lore storylines that would be on the backburner, otherwise. Thanks to expeditions, we know that there’s a new Mantid Empress, Helya survived her fate as a raid boss, Murlocs and Jinyu are terrified of something beneath the waves, and Wrathion is searching for the Dragon Isles.

Warfronts have also allowed the development team to resurface old characters that may not have the spotlight otherwise, like Muradin Bronzebeard and Danath Trollbane. It’s a good system for restoring old parts of the world, like the Arathi Highlands or Darkshore, and making them feel part of the world in the modern day of Warcraft.

Daily quests, a system brought over from Legion, still work as a basic way to reward players for showing up and getting out into the world. Incursions, the system that clusters daily quests in an area to represent a faction invasion on enemy territory, have been one of the high points of the expansion. With war mode on, incursions make the Battle for Azeroth feel real, immediate, and when I’m getting repeatedly camped, deeply personal.

The issue regarding content is appealing to World of Warcraft’s broad audience, which is split into many different demographics, and each expansion has to make choices about who to appeal to. There’s a host of content, but no one player will actively engage with and love every single system. 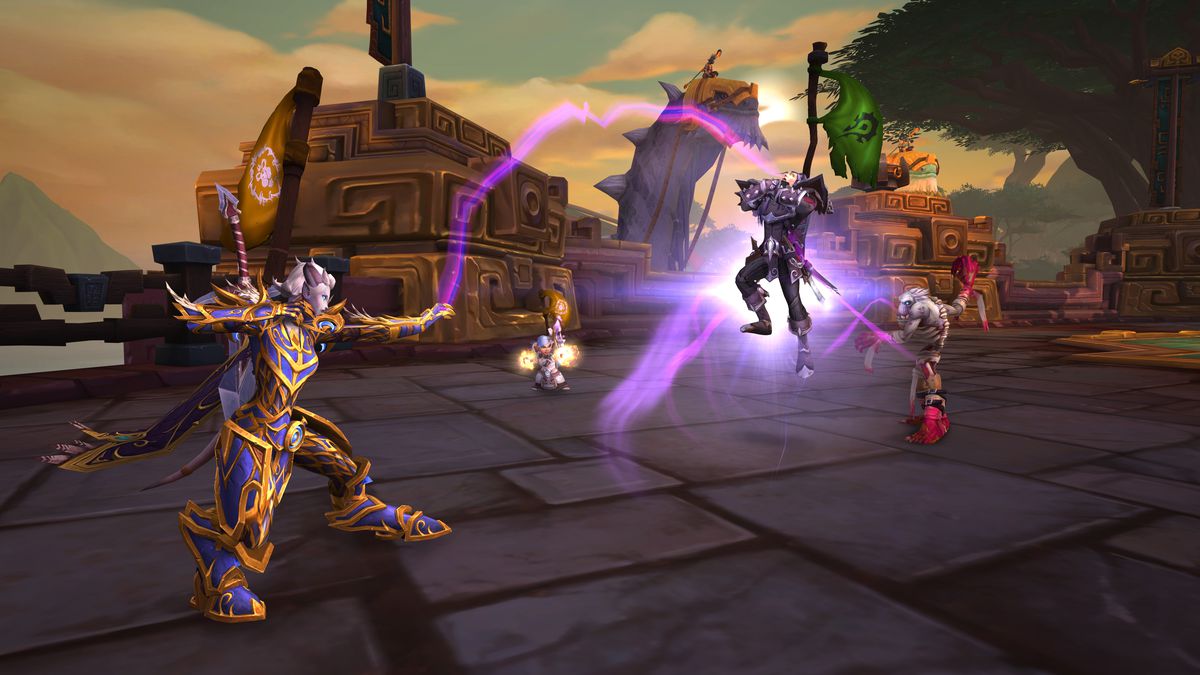 Building off that base

Throughout Battle for Azeroth, the core endgame systems have been improving and evolving. Azerite offers more traits and a new ring. Island expeditions, the best way to acquire Azerite, have been overhauled to have more events, less opacity regarding rewards, and less repetition. A second warfront, Darkshore, was added to the game, and heroic warfronts are coming to the game with the next major patch.

These improvements have been subtle changes, and not big headline-grabbing improvements. That’s because Battle for Azeroth is currently setting the stage for the Rise of Azshara patch.

Patch 8.2 will introduce two new major zones: Mechagon, the home of mechagnomes and startling new technology, and Nazjatar, the base of operations for the titular Azshara and her naga army. Rise of Azshara is meant to be a major distribution of new content: companion quests, storylines, new environments, and a lead-up to one of the biggest villains in Warcraft’s history.

“We’re mid-evolution [on World Quests],” says Martens. “We’re trying to push them in new directions in Rise of Azshara in particular. With Incursions, that was a way of packaging world quests in a region and giving them an appropriate, exciting theme. Moving forward, you’ll see world quests in new zones be geared towards those new zones.”

In Battle for Azeroth, the amount of content provided has felt fractured. Doing the Darkshore warfront gives stronger rewards than the Arathi warfront, meaning that even though they alternate, only one feels worthwhile to play. World of Warcraft has always been playing on the most recent patch and receiving those rewards, and this is part of why the current endgame situation is so frustrating for players. It’s not a lack of content in the game, but a lack of a reason to do that content.

Launch world quests and systems were about introducing fans to the zones and characters that would make up the expansion, according to Martens.

“Now, World Quests are avenues for new things,” he says. We’ll see new twists on World Quests in both Mechagon and Nazjatar.

In addition, the team is looking at rewards that go beyond just gear. “We’re looking at new customization options, not just in world quests and progression, but beyond that,” Martens says. Recently, it was announced that there will be additional transmog options for players to hide gear. Darkshore quests unlocked a Night Elf customization option with black eyes.

Rise of Azshara will also create a new baseline of content. With the current warfronts, Martens says the team was pursuing the right pace of content.

“A push and pull you have with repeatable systems and reward content is how often should it happen,” he says. “If it’s fun, but constant, it can be boring. If it’s fun, but rare, that’s frustrating. Warfronts were always planned to have the cadence they have now.” 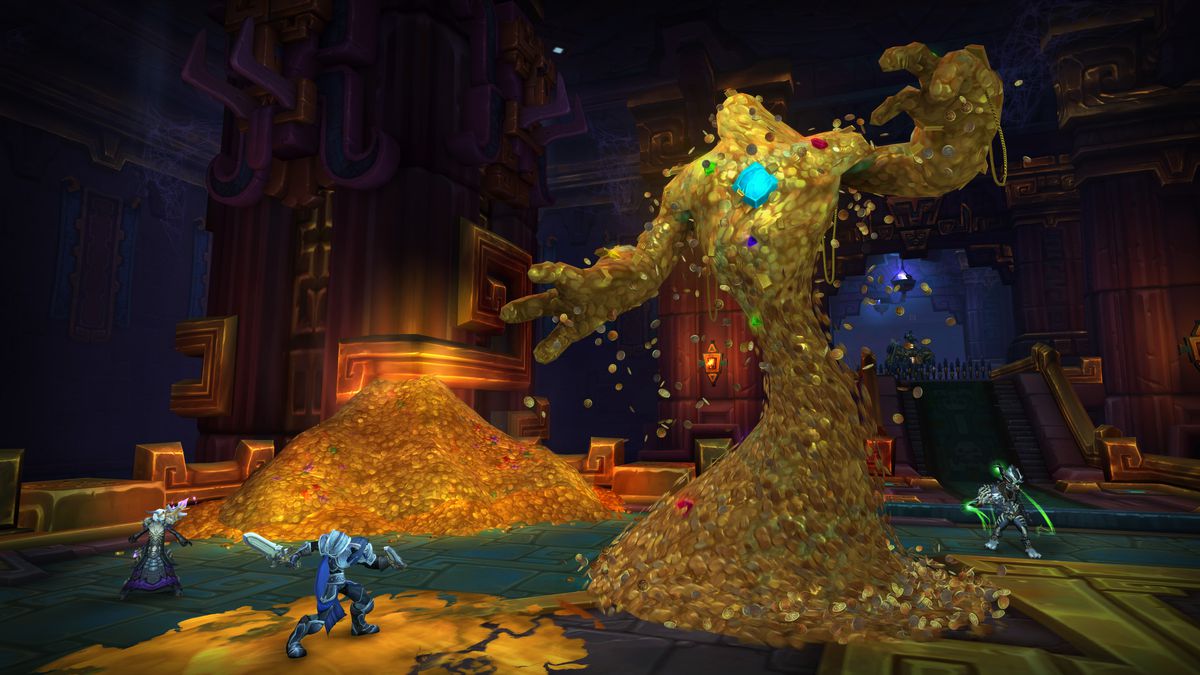 There will be additional warfronts in Battle for Azeroth, and the rewards to the existing one will likely be tuned and changed. We’ll also see lore characters continue to show up in these encounters. “Having characters in the encounters build connections with enemies, which can be as important as building relationships with allies.”

Many of the endgame rewards in Battle for Azeroth aren’t meant to give a statistical increase or a feeling that only lasts one patch. The team is slowly rebuilding Azeroth piece by piece, and one of the biggest features of the expansion, Allied Races, is meant to give players a reason to go back out into the world and experience nostalgia.

“We’re in love with the world, especially Eastern Kingdoms and Kalimdor, so any reason we have characters out there is interesting to us,” says Martens.

But the demand for new content and experiences will always remain a priority. “We have to move forward, and deepen and richen the experiences.”

With Battle for Azeroth trying to balance the dual goals of building upon the game’s existing world, while expanding to new islands and continents, it seems like the endgame day to day goals have been what have suffered the most. Patch 8.2 seems singularly focused on recapturing the joy of logging in and being active in World of Warcraft. It’s an ambitious goal, and Blizzard is pulling out the big guns with one of its most anticipated villains.

Will it succeed at shoring up Battle for Azeroth’s endgame weaknesses? The answer to that question lies in how successfully Blizzard can make the day to day of its game intriguing, rewarding, and compelling.