There’s nothing like looking out a window on a cold, rainy day, but Coffee Talk comes close. Out on Jan. 30 for all major gaming platforms, the game puts you inside the apron of a barista whose shop is only open past midnight.

The first thing you’ll note about Coffee Talk, beyond the gorgeous pixel art, is the soundtrack. Mood is king here, and appropriately, the game lets you set the lo-fi playlist at your establishment.

Beneath that relaxing exterior, however, lies deeply-rooted racial tensions. Every in-game day, you’re greeted by a newspaper front page that’s littered with headlines regarding all the fantastical inhabitants of this world. Here, everything from dwarves to elves are real — and each one comes with its own politics and viewpoints, most of which will become obvious as you speak to your customers.

When patrons come up to the counter, they’ll be ready to order something that you actually have to make. Coffee Talk presents you with a variety of ingredients, which you use as the base, primary, and secondary layers of your drink, depending on what you’re concocting. For more simple drinks, you can simply look up via an in-game app; a triple-shot espresso, for example, is just a matter of selecting coffee + coffee + coffee. The game also lets you run wild with the latte art, which you can draw by hand. 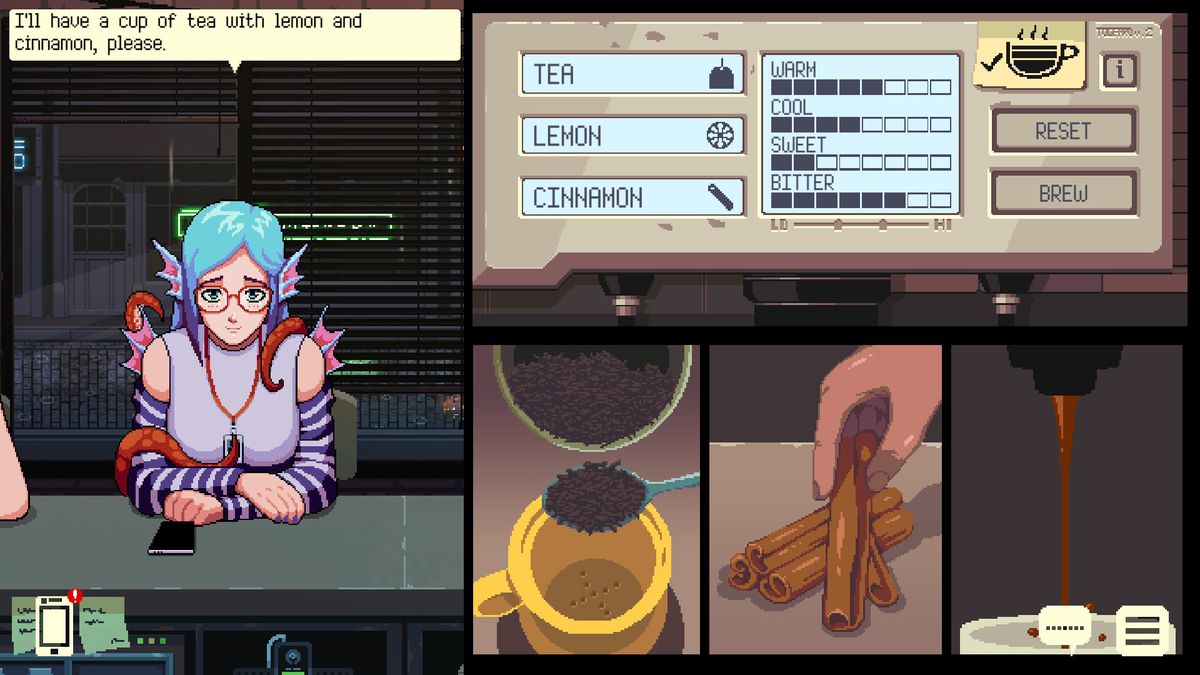 But sometimes, people will ask for more complex drinks for which there’s no guide. For those, you’ll have to use your best judgment. I’ve already gotten a Chai and some weird drink involving an egg wrong, but fortunately, the recipients still drank them. (The game also lets you trash up to five drinks a night to redo them, which is helpful for when you mess up.)

Curiously, the storylines for customers are determined by what drinks you make them, not by your dialogue choices. One werewolf, for instance, comes in asking you to make him a ginger drink that will help manage monthly “furies” where he has to be restrained. I got that drink wrong, too, though the gracious werewolf said he’d be back to try it again later. I have a feeling that if I don’t get it right, it’s going to have huge ramifications for that character in the long run.

Perhaps it’s more accurate to say you play as a therapist, rather than a barista. Much of the game is spent listening to your patrons talk about their day-to-day problems, giving the whole thing a slice-of-life feel. But the character’s issues are not the ones you and I might face, because many of them aren’t human. 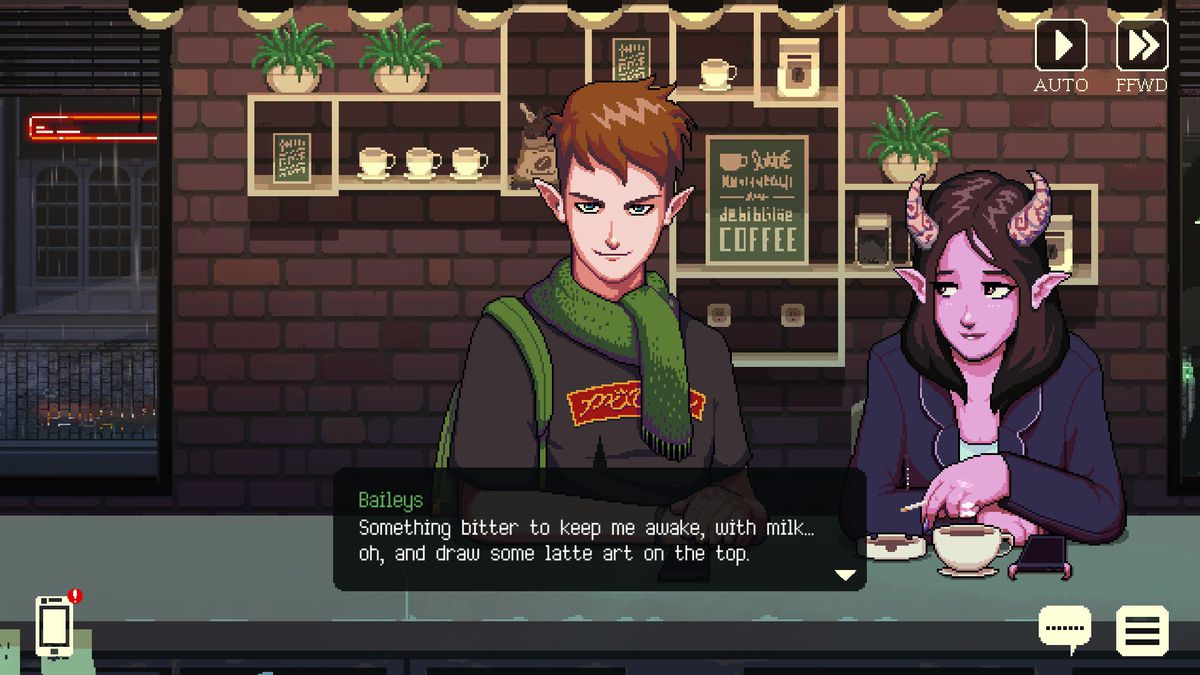 One troubled couple composed of an elf and a succubus, for example, come in agonizing over their romance. Apparently, their parents won’t approve of the relationship because of cultural differences, but also because of lifespan differences — elves live for a very long time. These characters will return later, sometimes alone, to discuss the finer points of the dilemma. You learn, for instance, that while the succubus adores the elf, she doesn’t want him to give up his immortality for her. It feels like too much to ask.

It’s not all drama, though. At one point, you meet an alien wearing an astronaut suit who doesn’t quite understand Earthly customs. Other times, regulars will simply order their usuals and stick to their phones. Or, someone might order a drink and go sit elsewhere. I like those folks. Memorizing their drinks makes the whole thing feel more intimate, even if we don’t actually talk much. It’s certainly preferable to when patrons start bickering with one another, because their viewpoints don’t align. Ugh.

So far I’ve only played for a few hours, during which I’ve met all sorts of creatures, from mermaids to cat girls. Learning more about them over a comforting cup of coffee is a delight … even if I can’t always get their drink exactly right.

A demo is available for Coffee Talk on Steam and the PlayStation store, if you’d like to give it a try.

Coffee Talk will be available for PlayStation 4, Xbox One, Nintendo Switch, and Windows PC on Jan. 30 . The game was played using a download code provided by Tone Productions. You can find additional information about Polygon’s ethics policy here.