When Bethesda took the stage ahead of E3 on Sunday, there was an elephant in the room: Fallout 76. Feedback to the game, which launched in a rough state, has not been pretty. Bethesda knows it. That’s why the publisher kept referring to fan criticism that helps keep them on their toes during their E3 presentation, and why Bethesda announced a number of changes coming to Fallout 76 last night. But if you look closely, it’s all a part of an ongoing effort to revitalize its controversial game.

Fallout 76’s many faults have been well-documented by this point. Without NPCs, the story seemed scarce, and players weren’t given enough tools to meaningfully take up such roles themselves. Bethesda’s jank made a PvP-centric experience hellish. Players kept finding exploits left and right. The list goes on.

At first, Fallout 76’s updates functioned like emergency triage, with Bethesda scrambling to improve the wasteland’s dire state. But now enough time has passed that Bethesda can start to focus on actually improving the game. Bethesda added more quests and beefier dungeons, as well as a hardcore survival mode. Players got the ability to open up their own stores, which helped liven up the wasteland. While these additions haven’t been perfect, they showcased a willingness to experiment: In one update, Bethesda added an unmarked quest that seemed to hint at the opening of Vault 51, a bunker with people in it.

This, it seemed, was a tease for Fallout 76’s big new update, Wastelanders. For one thing, Fallout 76 will soon get actual NPCs with dialogue. While hardcore Fallout 76 fans were doing just fine without characters penned by Bethesda — roleplaying has been all the rage — the return of NPCs marks a curious change of course for the studio.

Previously, Bethesda Game Studios director Todd Howard said the publisher was “leaning in” to the fact the game had no NPCs, as that was a feature that set the title apart from other Fallouts. The underlying message was that Fallout 76 didn’t need NPCs, because players would decide for themselves what characters would do to repopulate the wasteland.

Some players took this to heart — one fan ended up declaring himself an endgame boss, for example.

Overall, the omission wasn’t very well received, though, with players noting that Fallout 76 felt strangely empty. And while Fallout 76 was still chock full of stories delivered through Holotapes and notes, the narrative was limited by the fact everyone inevitably ends up dead thanks to the game’s narrative. Bethesda must have reevaluated its stance, but instead of outright admitting fault, the developer is marketing their change of heart as a natural progression of the game. The point was to rebuild society, and players did exactly that, Bethesda’s E3 2019 presentation said. But we do know that these changes were a result of player feedback: The publisher flew out fans to discuss what was in the pipeline, and to talk about what could improve down the line. It was a move that ended up building goodwill among disgruntled devotees.

“I now see them not as a faceless black hole gobbling up our time and money but a group of people working hard and limited by a number of factors,” Reddit user u/Aten_Ra said in a post detailing their experience with Bethesda. “Change is slow, especially when it comes to large companies, but they are trying to find ways to ‘hear us better’.” 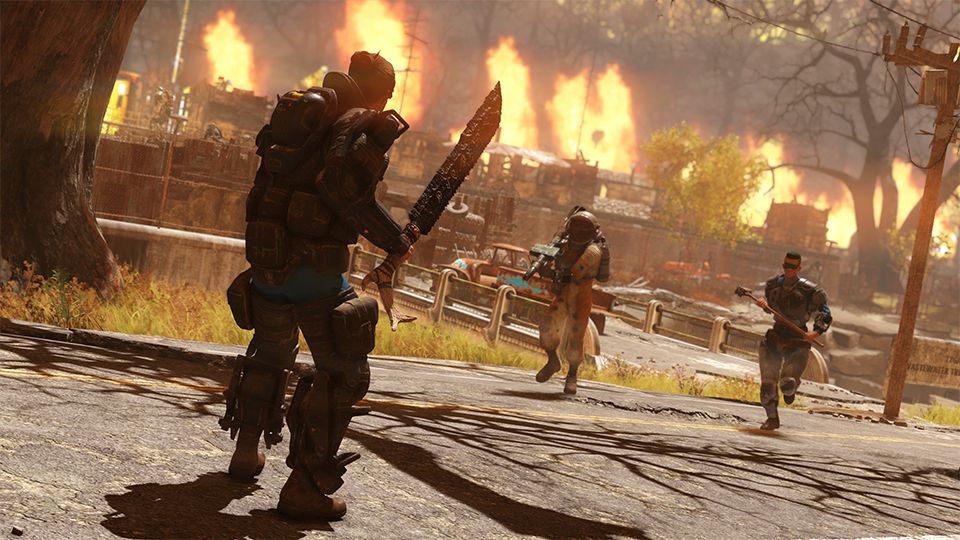 The other big addition announced yesterday was a trend-chaser: a new battle royale mode. It’s not really something that anybody asked for, but in a way, it fixes some of Fallout 76’s biggest problems. Right now, player-versus-player combat is horrendously imbalanced thanks to weapons that can one-shot players, and items that turn characters invisible for minutes at a time. With a battle royale setup, everyone is theoretically on an even playing field — it all comes down to what gear players can find, and appearance rates can be tweaked by Bethesda. And, like NPCs before it, battle royale has a lore-specific reason for existing. The base game, after all, allows players to nuke Appalachia to create endgame raids. Now, Bethesda is saying this mechanic was so devastating that it sparked an actual nuclear winter that will make up Fallout 76’s storm cloud.

It’s unlikely that Fallout 76’s battle royale mode will launch without hitches, as the base game itself isn’t always stable. But Bethesda seems determined to improve the experience: One of the other big tweaks going live today is a combat overhaul, which is crucial when the game is launching a new PvP mode. The battle royale mode also seems to be adding its own flavor to the mix by allowing players to gain access to the aforementioned Vault 51 as they rank up within Nuclear Winter. Which is to say: A multiplayer mode directly ties into Fallout 76’s story. Nuclear Winter may be joining a long list of battle royale games, but you get the feeling that Bethesda is making an actual gamble with the way the game is set up, all in the name of attracting new players.

There’s a lot more packed into today’s update, from new customization items to a new main quest. Notably, all of this is being released at the same time as a weeklong free trial where progress can carry over to the full game. Bethesda seems to be banking on an influx of new players here, as evidenced by the fact it’s recently published a long beginner’s guide to coincide with that same free trial. In many ways, Fallout 76 still has a long ways to go, but as we go into year two, it seems that the post-apocalyptic shooter is slowly becoming the game that Bethesda promised in the first place.