Note that if you click on one of these links to buy the product, IGN may get a share of the sale. For more, read our Terms of Use.

If you’ve always wanted an Xbox Elite controller for your Playstation 4, one has finally arrived, sorta. The C40 TR is Astro’s ticket to the premium controller market. It’s customizable, with modular thumbsticks you can make parallel or offset in just seconds. It has a heavy, high-quality body that makes the DualShock 4 feel like a child’s toy. On the back, there are two fully mappable buttons you can program at a moment’s notice. It has both a 2.4 GHz wireless mode and a lower-latency wired mode and works flawlessly across PS4, PC, and Mac. As Astro has loudly branded on the device, this bad boy is “Tournament Ready.” The catch? It costs $200. 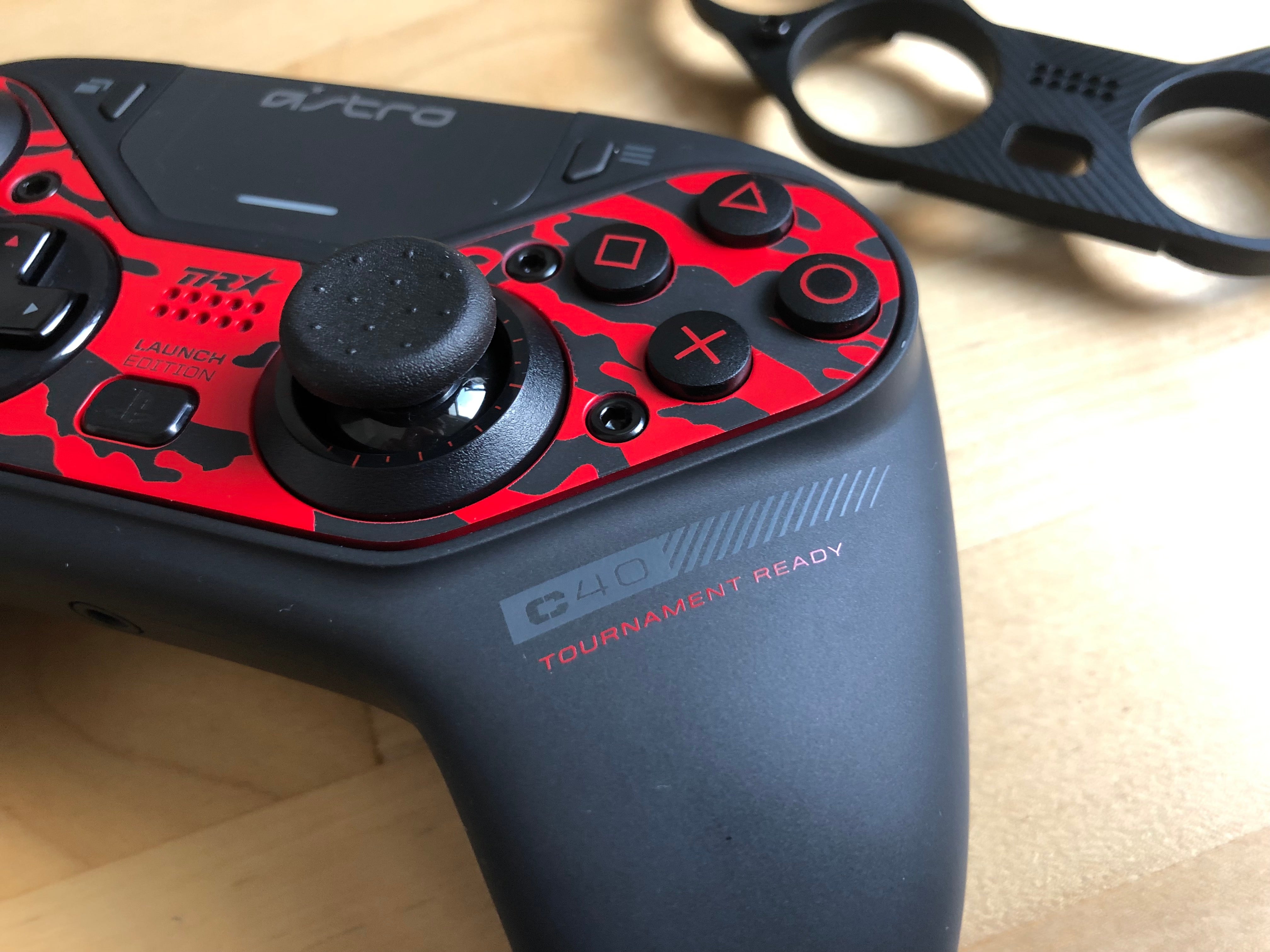 Aesthetically, everything else seems to be in check. The controller is not, in fact, hollow. Instead, it’s remarkably heavy—weighing in at nearly 11 ounces—or more than half a pound. Compare that to the DualShock 4’s paltry 7.4-ounce weight.

It’s not just the heft that makes the controller feel substantial. The C40 is thick, with a less aggressive contour than the DS4—it feels like a stocky Xbox controller. No surprise, as many of the team at Astro were the minds behind the original Xbox 360 controller way back when.

Along with the contours and heft, there’s a pleasing rubber-like coating and some grooves on the backside of the handles. These inclusions make the controller feel as ergonomic and tactical as any controller I’ve ever used. Pair that with high-quality buttons and triggers that have just the right amount of resistance, and the C40 is a pleasure to hold. 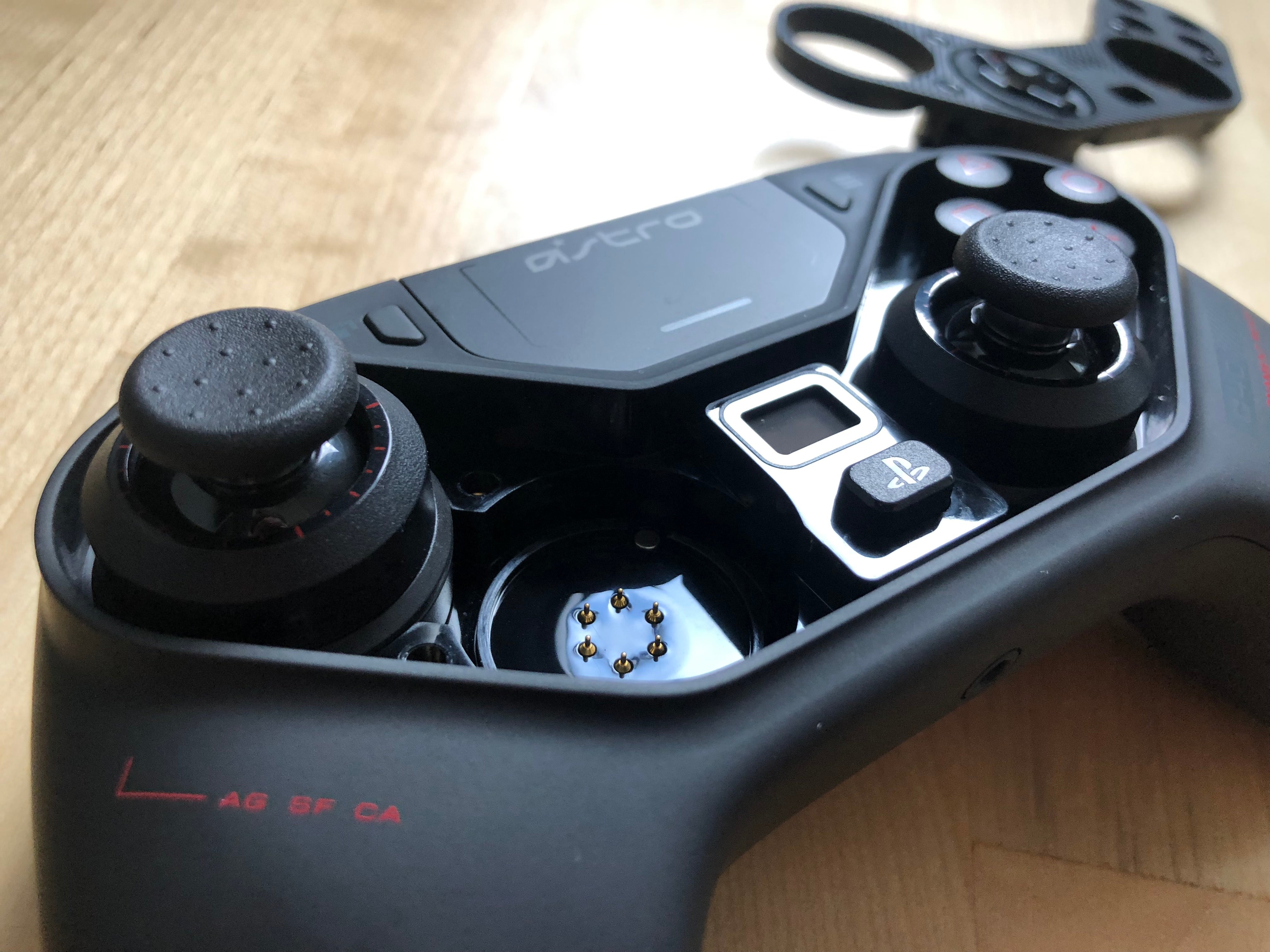 The C40 comes with a wireless dongle that plugs directly into your PS4’s USB slots. (That also means if you’re trying to ball out with four of these puppies, you’ll need a USB hub.) Astro claims this proprietary dongle helps the C40 sustain a fast, reliable connection, but anyone worried about wireless latency can use the controller in wired mode.

One of the C40’s defining features is its rear buttons—called the UL and UR buttons. Unlike the Scuf Vantage and Xbox Elite, the C40 only comes with one rear button per side. They span a pretty wide section of the rear, so your middle fingers naturally rest on them as you play. You can remap these triggers during games by holding a small button on the back of the controller for 5 seconds. The LED indicator on the front blinks, the controller rumbles, then you press the rear button and whichever input you’d like to remap it to. While it might take a bit too long to do this in the middle of competitive matchmaking, the process is still pretty fast. It also means you won’t have to plug your controller to fine-tune controls very often.

You can also affect your gameplay by popping the trigger stops on the back. These aren’t anything special—they’re tiny sliders that physically prevent the triggers from being fully compressed. In theory, that’ll help serious gamers pull off repetitive trigger pulls faster. 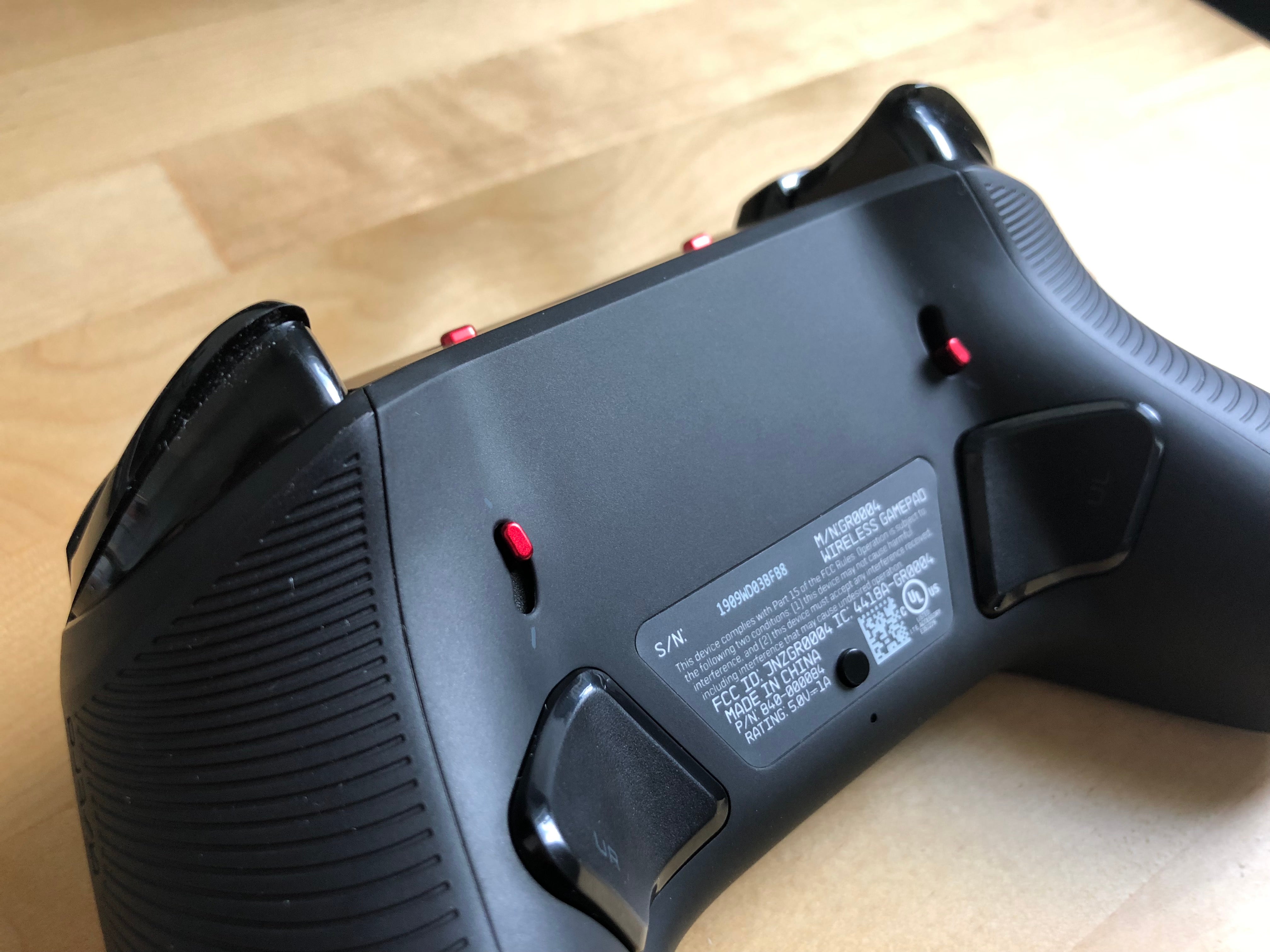 The C40 TR comes with a slick travel case that stores two concave and convex thumbstick toppers, as well as a hex key, the transmitter dongle, the cord, and a spot for an extra thumbstick module. 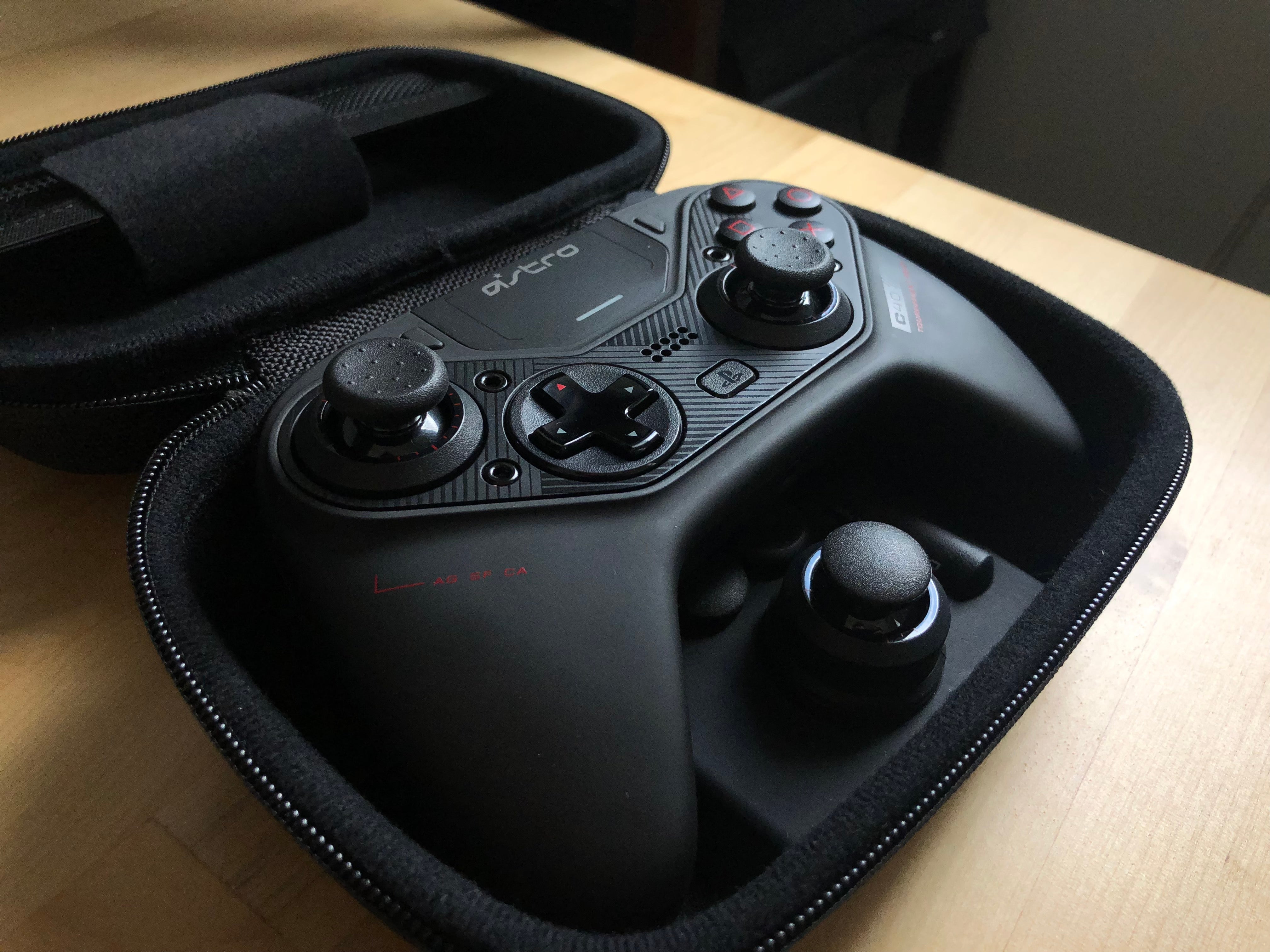 The C40s final trick is its customizability, starting with the swappable modules. With the quick turn of an included screwdriver, the C40’s thumbsticks and D-Pads are interchangeable. If you’d rather play with asymmetric thumbsticks, it takes about 20 seconds to make that happen. Getting drift on your thumbtack? You can swap it out for a new one—which Astro says they’re selling for a surprisingly reasonable $20. You can swap out your thumbsticks for taller ones, or pop a disc on your D-pad. Astro’s hoping this makes pro gamers more comfortable bringing the C40 to tournaments. After all, if something goes wrong, they can swap out a janky thumbstick for a new one. 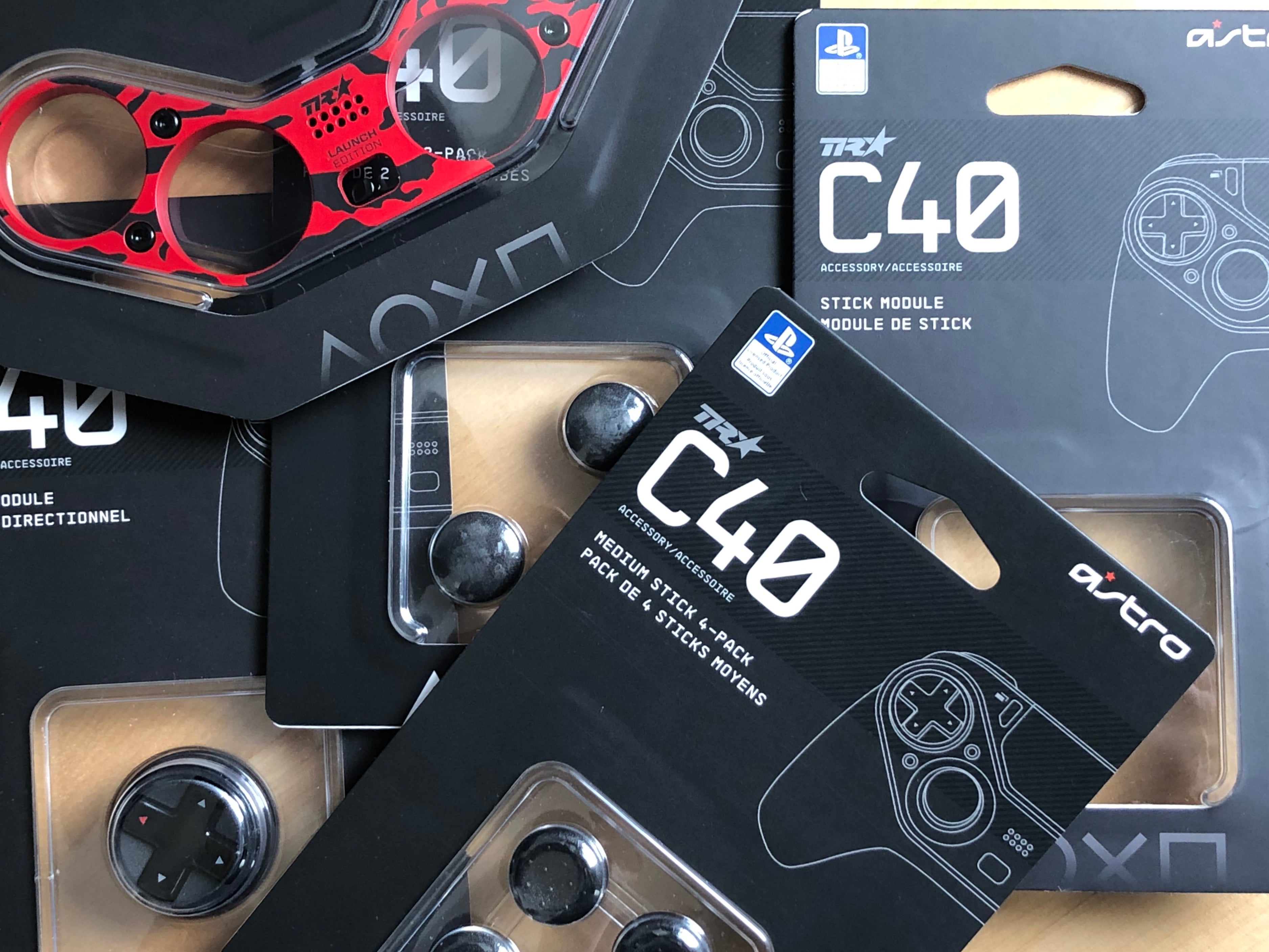 The C40’s customizability extends beyond its module selection. Using Astro’s free software, just about every single button on the controller can be mapped to whatever you desire (only the PlayStation, Share, and Options buttons are sacrosanct.) And once you have the perfect button layouts picked? Then you can get really creative. 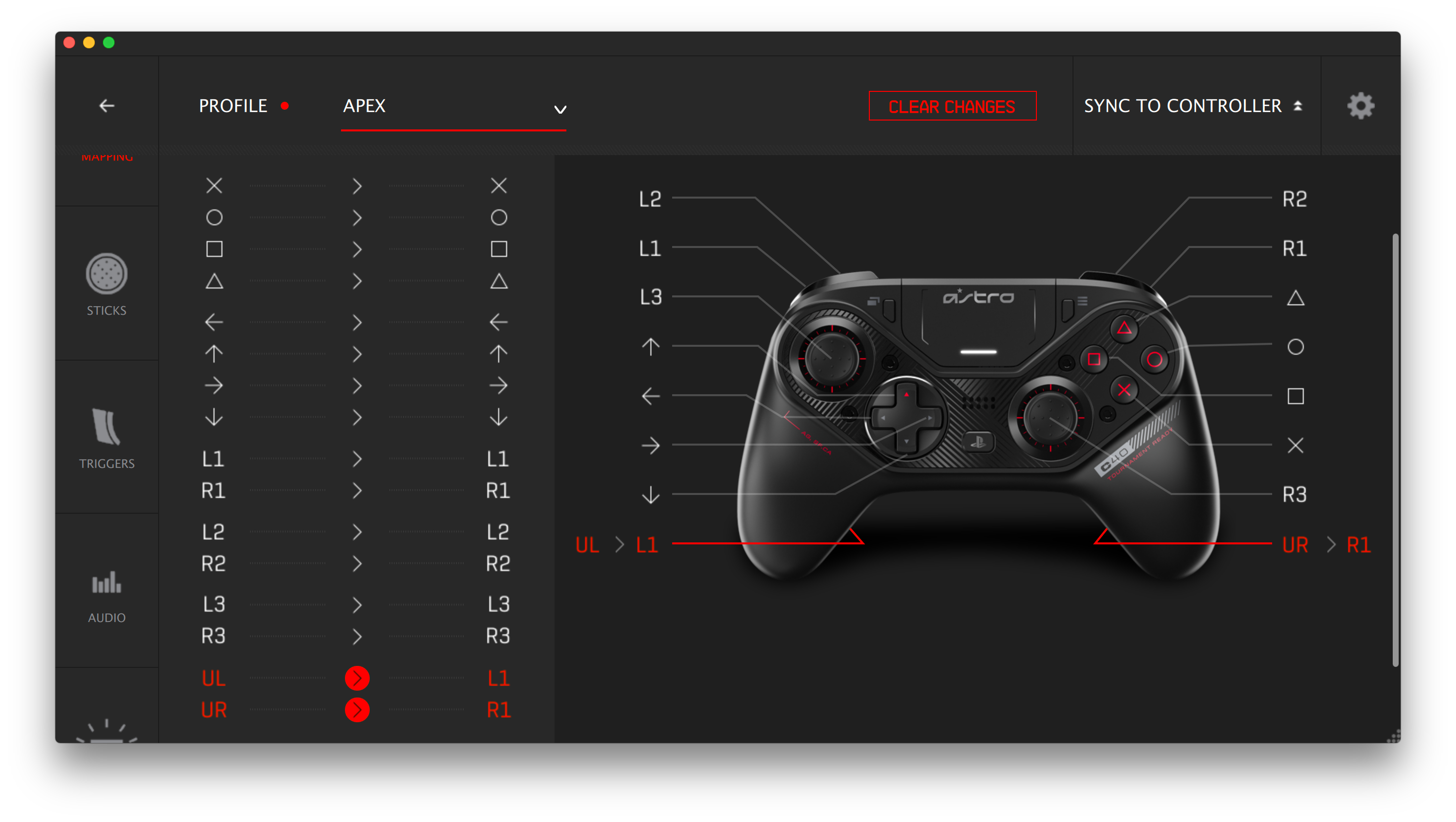 The range of options offered is nothing short of astounding. You can adjust the rumble intensity—on the left side or the right side. You can change the LED brightness. You can decide how far sticks need to travel to register as a full tilt. Crucially, you can do the same for the triggers—meaning even if the game doesn’t register your trigger stops as activating the triggers, the software can.

There’s a section for Audio Output—you can equalize how the C40 outputs audio from its 3.5mm headphone jack. You can even adjust the volume that comes out of the controller. That’s something you’ll probably want to do because the C40’s onboard speaker seems quite a bit louder than the DualShock. 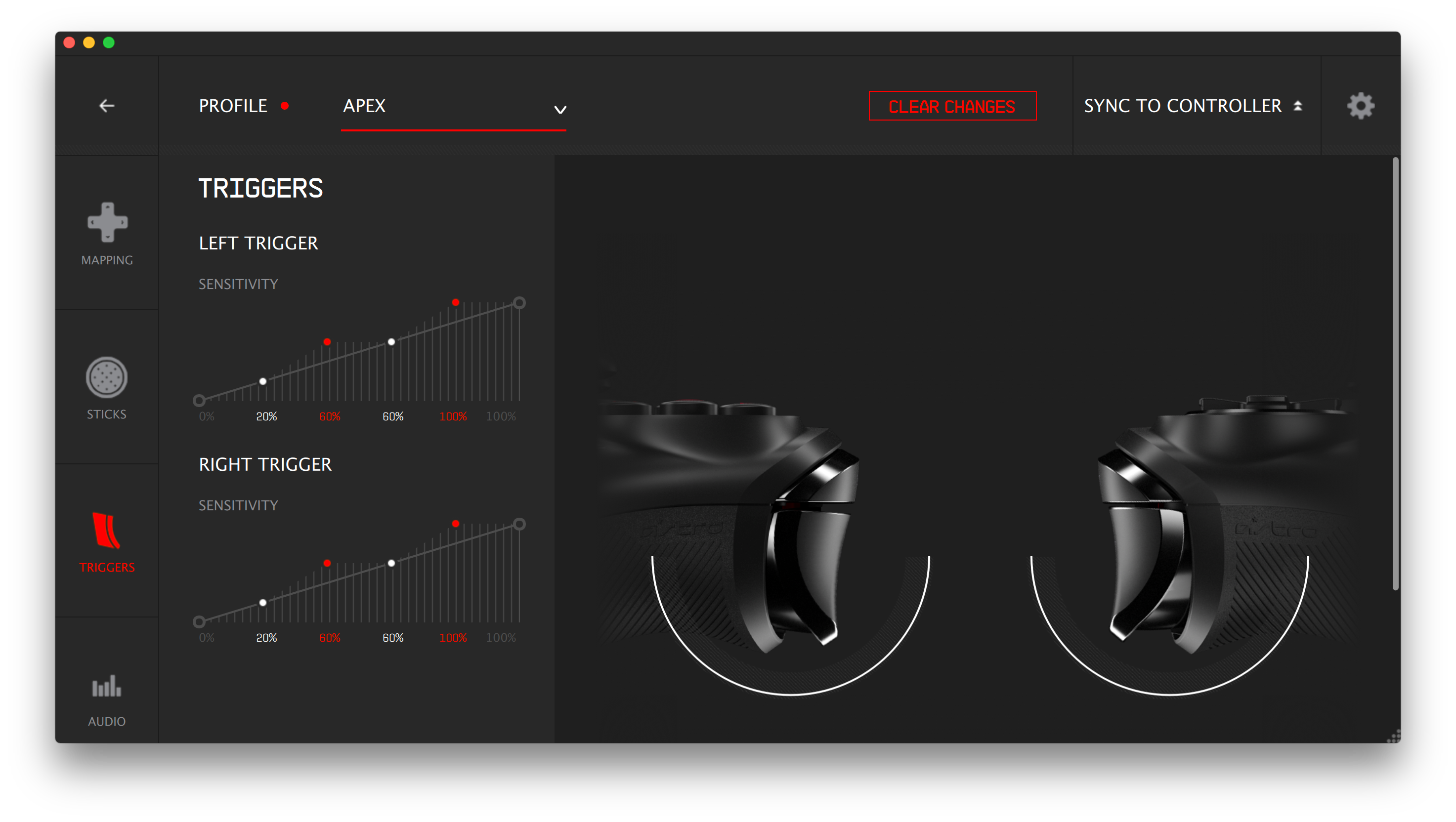 You can create as many of these profiles as you want, and then sync two to your C40 at a time. Switching between the onboard profiles is simple: you just flip a switch at the top of the device. That means unless you’re often switching between three games with vastly different profiles mapped, once you’ve got a few customizations you prefer, you really won’t have to rely on the software—especially given the C40’s UL and UR remapping. 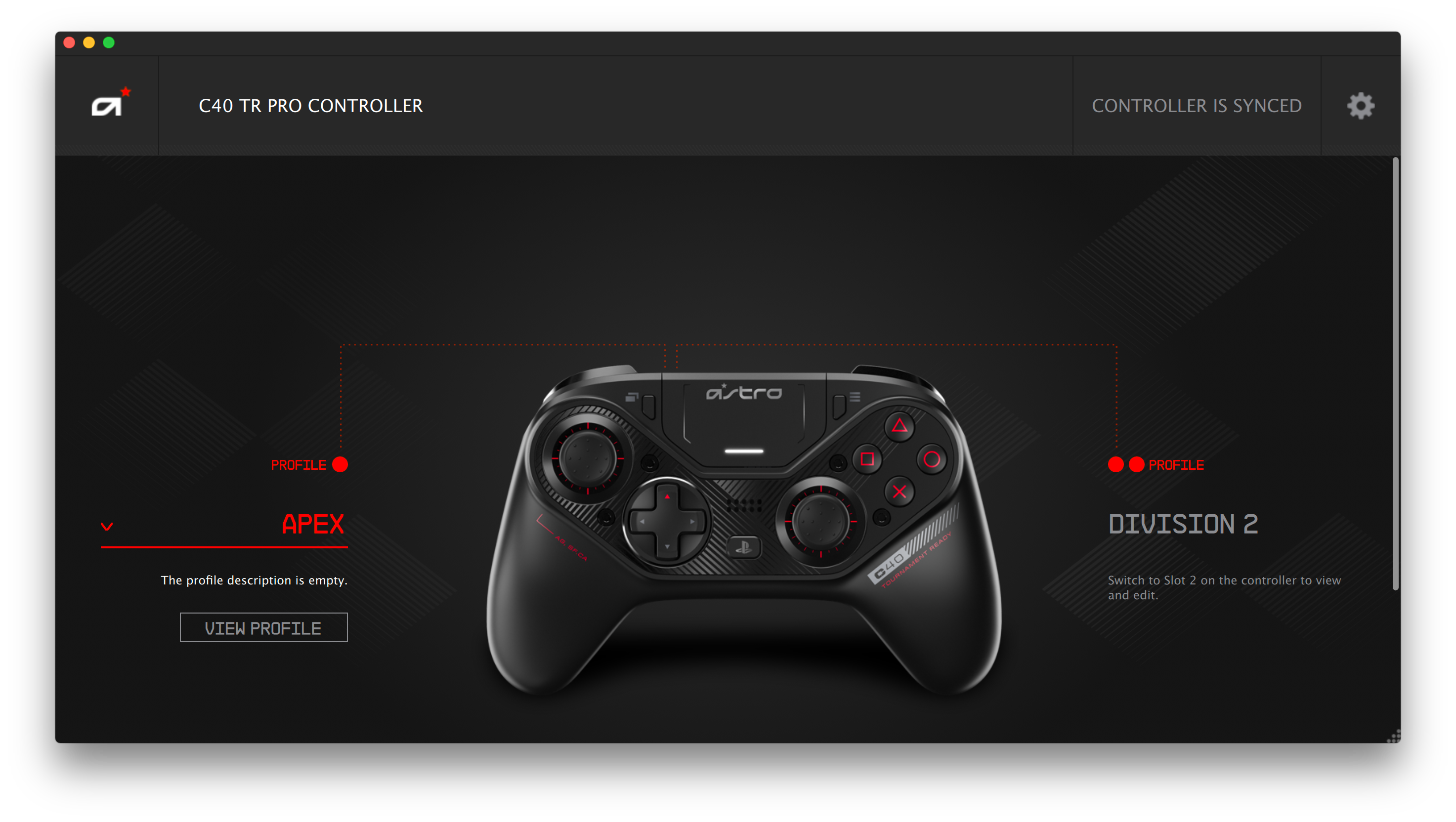 The only real weirdness I experienced was after changing thumbsticks. No matter what your layout, the onscreen controller doesn’t look any different. Even when changing the inputs of the D-Pad, the controller will always look as if it were in its stock configuration. This is, obviously, only minimally confusing—but surprising, provided the care given elsewhere in the software.

That all leads to the ultimate question: did it actually improve my gaming? Without a doubt.

Take The Division 2. Two often used inputs are left and right on the D-Pad, which tosses grenades and heals your character. These are inputs you can’t live without, but their position on the DualShock make them practically impossible to hit during high-intensity firefights. So I mapped them to UL and UR—which made them a thousand times easier to activate in the heat of battle. Grenade tossing was especially beneficial, allowing me to quickly throw a grenade without ever requiring me to move my thumb from the stick.

The C40 TR saved my butt dozens of times.

The Division 2 also made for a good case study in the trigger stops. I was able to shoot with the right trigger stop activated, but I couldn’t aim down the sites. So I made a profile with increased the L-trigger sensitivity. The result was ADS (you know, aim down sights) that felt snappy as hell. The C40 TR saved my butt dozens of times.

The same could be said for every game I played: healing in Apex Legends, sprinting and melee’ing in Call of Duty, cycling through items in Sekiro. The new triggers vastly improved all of these actions. 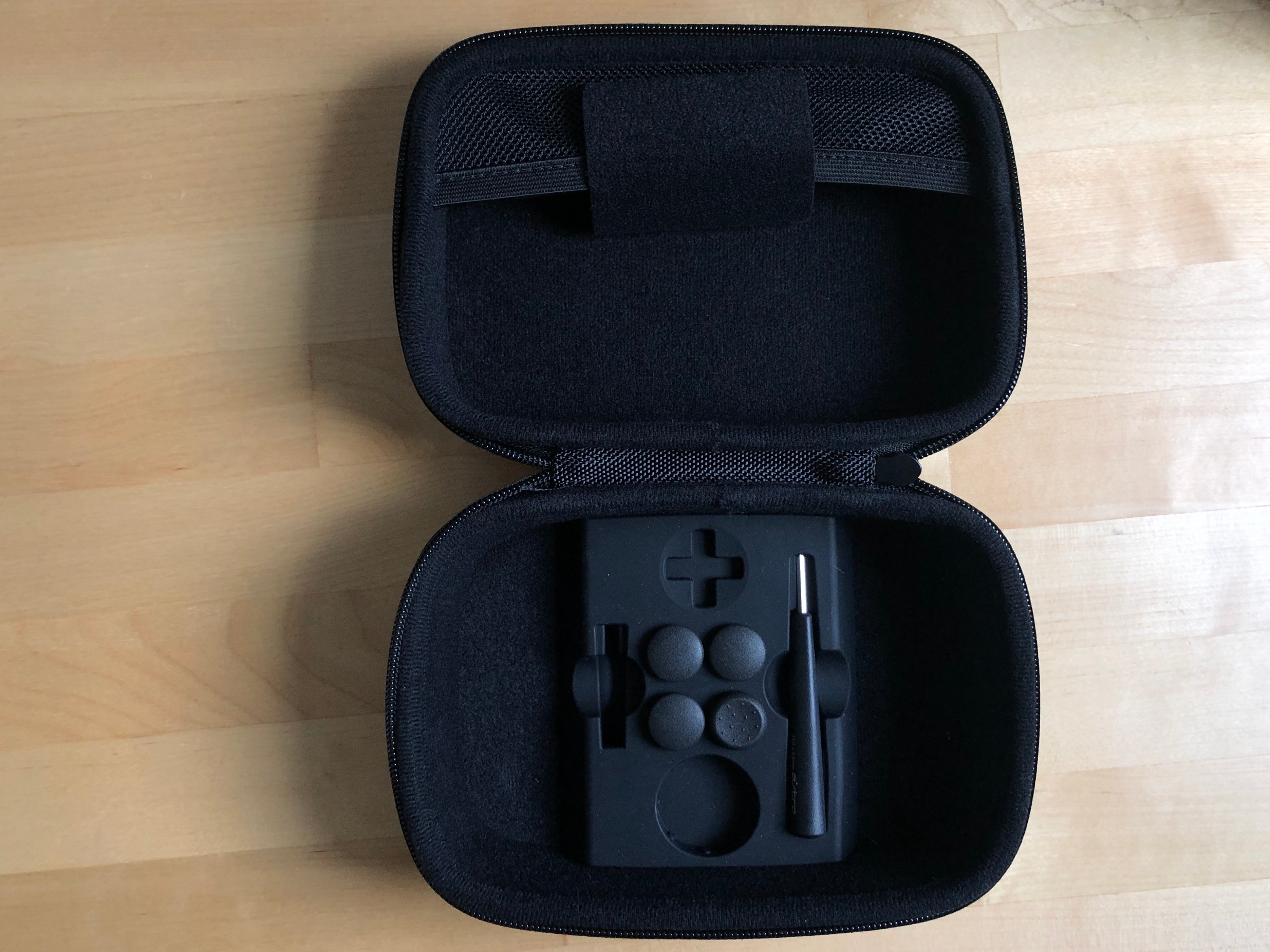 Most players interested in the C40 TR won’t be coming from something like the Xbox Elite, but if they are, the single rear trigger might seem less inspiring. With something like four rear triggers, you could theoretically eliminate every face button, but for me, the single triggers were more than enough—and each time I changed them, it took some time to re-familiarize myself with what they were supposed to activate. Suffice to say, if next-generation controllers don’t come stock with rear triggers, I’d be shocked.

The controller just feels better than the DualShock, thanks to its thick, grippy frame.

I’m less convinced of Astro’s wireless solution. In more than 20 hours of testing, the controller disconnected four separate times—an anomaly that rarely, if ever, happens on my DualShock controllers. On a different occasion, my controller completely froze, requiring me to flip switches, mash the PS button, and eventually plug in and disconnect the controller before it returned to normal.

Thankfully, these anomalies were few and far between. For the majority of my time, I was reaping the rewards of the controller’s brilliant design. It’s not just the profiles and rear triggers, either. The controller just feels better than the DualShock, thanks to its thick, grippy frame. 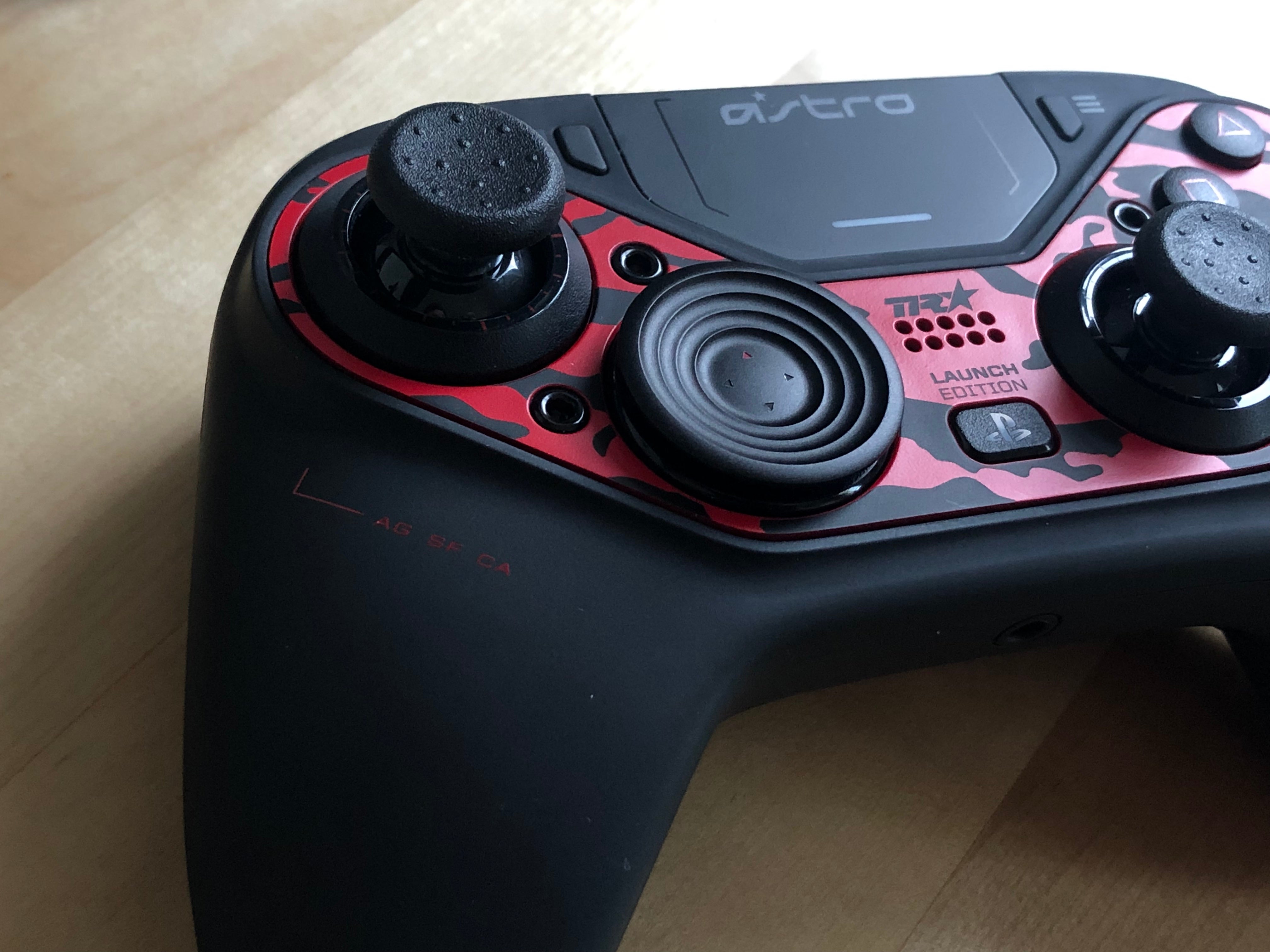 The C40 TR is rated at 12+ hours of battery life. That doesn’t sound like much, but it’s far more than the 7-8 hours the DualShock is estimated at—and it doesn’t require batteries (or a Plug & Charge Kit) like Microsoft’s high-end Elite controller. Of course, if you’re taking advantage of the C40’s headphone jack like I was, you’ll burn through it quite a bit faster than that. Charging the device is a bit of a hassle. The C40’s two meter USB cable was too short to reach my PS4 and actually plugging it into the controller was finicky, thanks to a recessed Micro USB port. 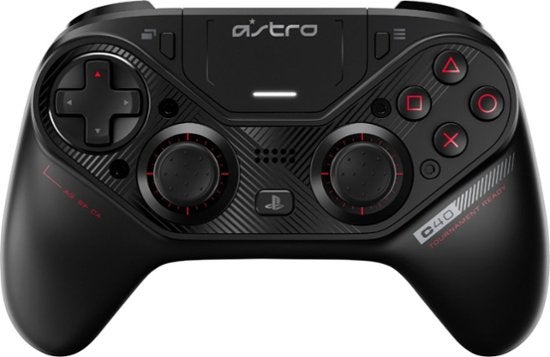 I love just about everything else about this controller—from its rubberized texture and onboard button remapping to its tinker-friendly software. But at $200, and with no guarantee the C40 will be compatible with whatever PlayStation releases next, it’s overkill for most of us. But if you’re looking for the best tournament-ready PS4 controller, the C40 takes the title.