I never knew I wanted a pet bird, but Falcon Age made me care for its titular raptor like she were my own. Outerloop Games makes smart use of both gameplay and story to pull that off, despite running into some technical issues along the way. While this adventure is fully explorable on a good old-fashioned TV, it is absolutely more rewarding when experienced on PSVR thanks to a number of engaging interactions and control ideas.

Falcon Age’s frequently squawky sidekick is so handy it almost feels like a co-op game. You and your feathered friend explore a sparse but artistically striking desert landscape and take down refinery outposts of a colonizing power. With writing by 80 Days’ Meg Jayanth, Falcon Age explores a fascinating tale of reigniting a resistance that’s largely given up the fight. Rather than going big or grand with its events, the most intriguing moments come from small character interactions.

How your auntie, who’s well versed in the ways of falconry, chastises you; how the robot overlords of the planet grow amusingly frustrated with having to deal with you; and how citizens do and don’t hold onto the hope of rebuilding their society come through in sharp, well-written conversations that made me care for more than just my bird friend. There are a couple of relationships I wish Falcon Age had more time to focus on, particularly when it comes to your family history. Because of its brevity, some of the dialogue choices you can make caused some character moments to feel too abrupt to me. (Having gone back and made some other choices, there are much more natural flows to those conversations than I saw on my first playthrough.)

Falcon Age made me care for its bird from the opening minutes of the story.

But the bulk of my adventure involved bonding, exploring, and attempting to bring down my rulers with my avian companion. Falcon Age, from the jump, made me care for her by introducing her as a baby bird who loses her mother, and I mean really: how are you not supposed to immediately fall in love at that point? While I’d have liked to have watched her grow up gradually, Falcon Age skips over most of her early life and goes straight to letting you interact with her as a full-grown falcon, and she’s a joy to spend time with. 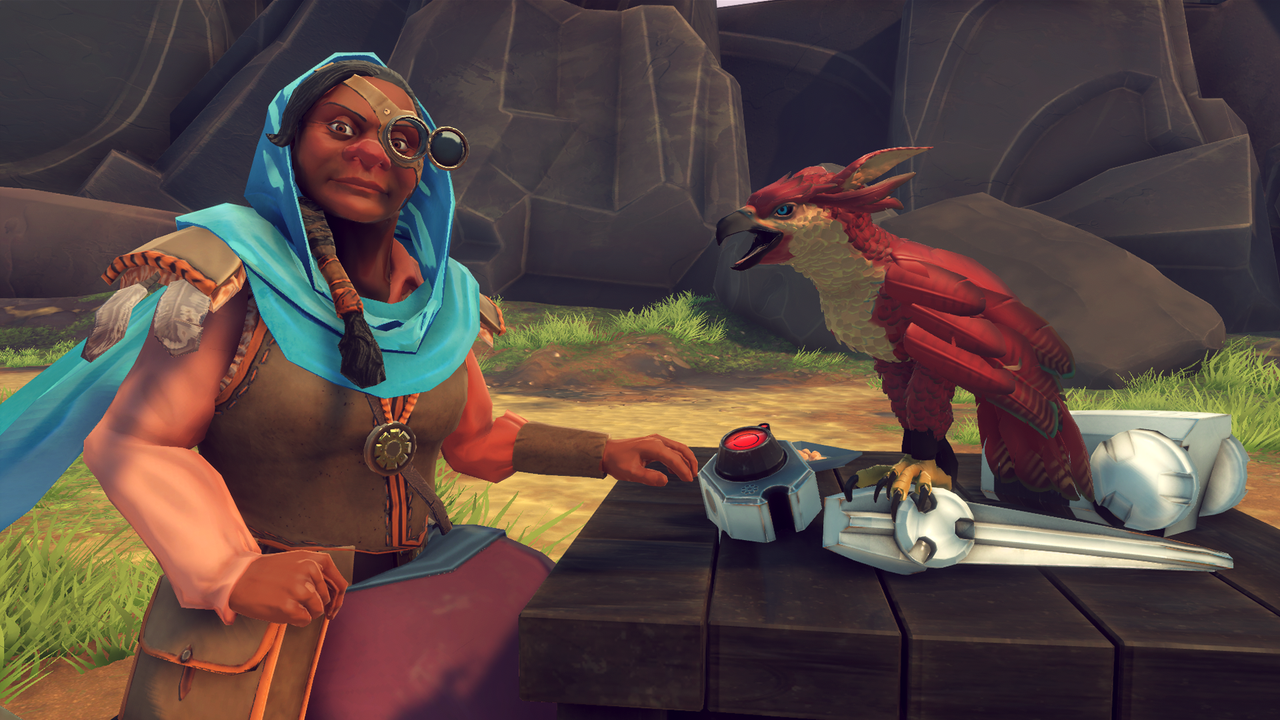 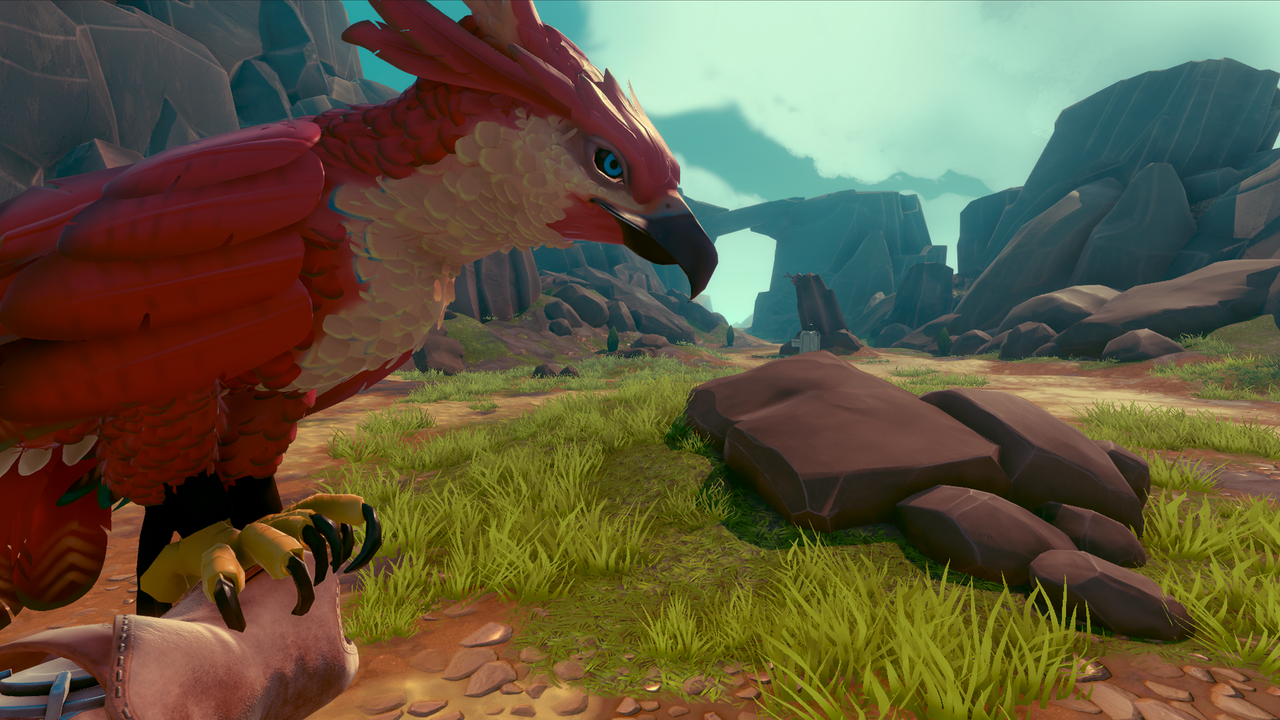 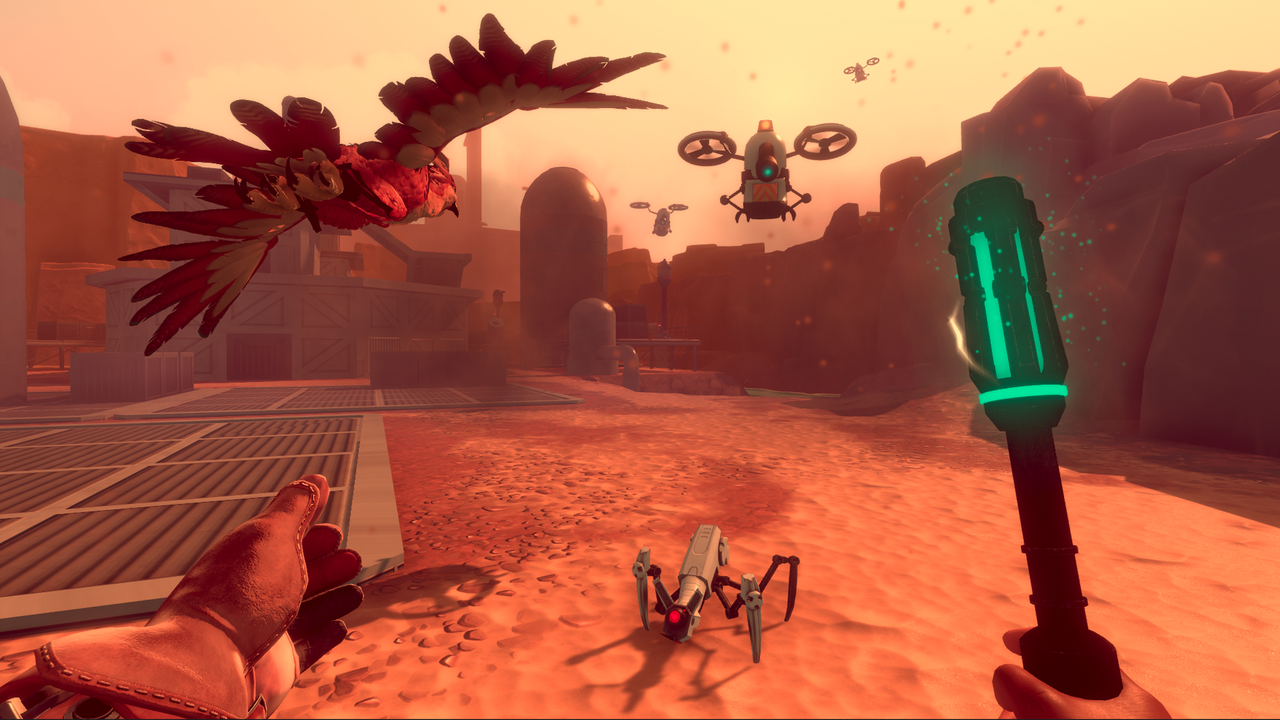 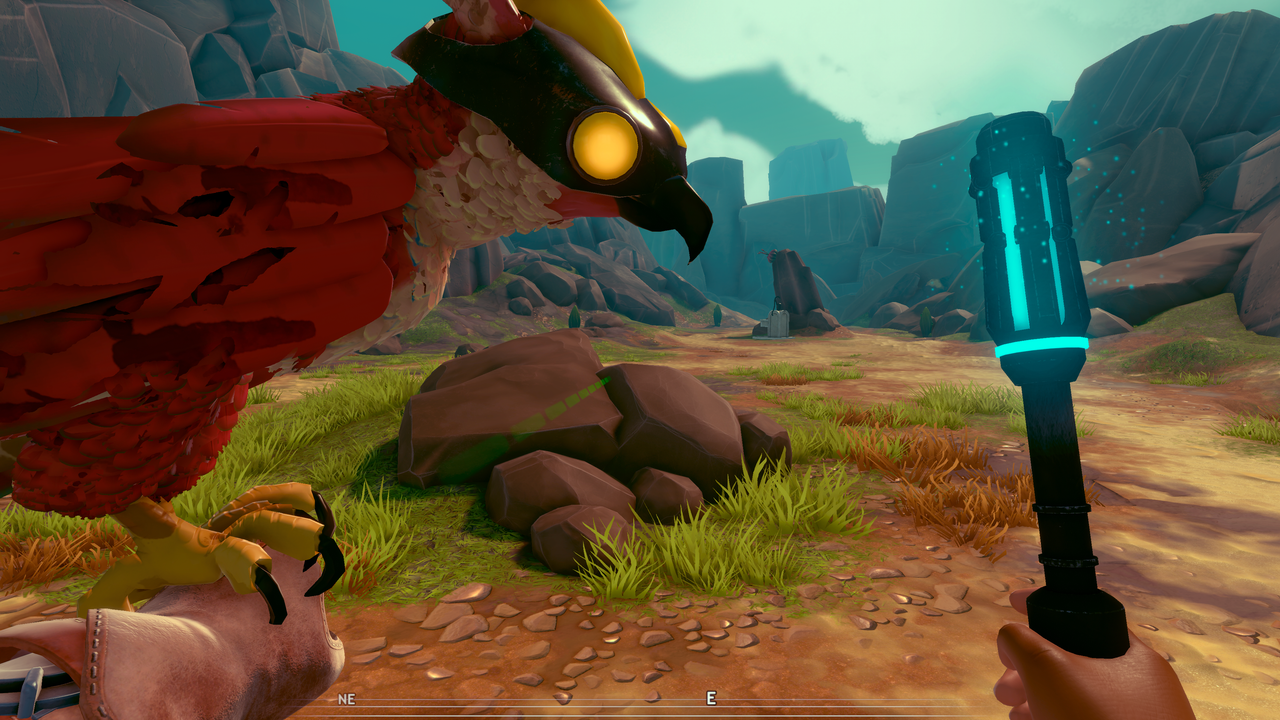 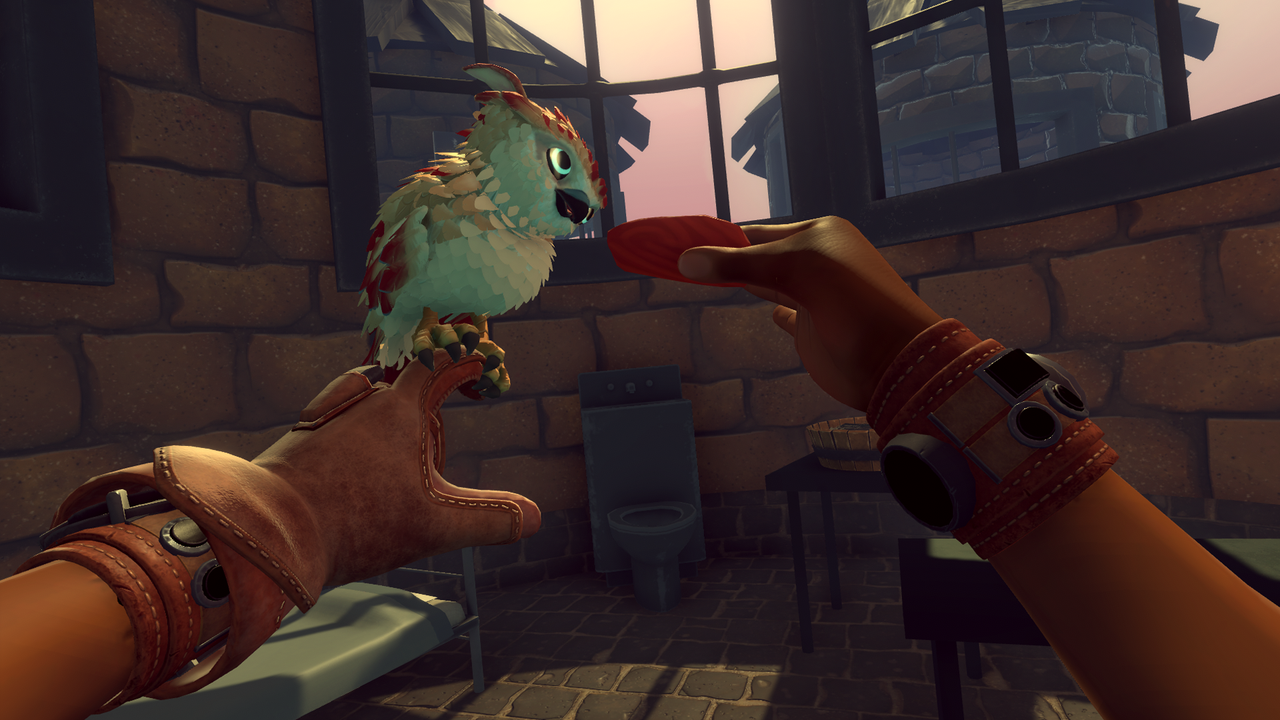 It’s so satisfying, particularly in VR, to work in concert with your bird. While exploring the environment you can point at a creature for her to hunt down or at a plant to harvest fruit from. She can also be directed in combat, either to knock out some machinery or distract a robot enemy so you can bash its head in. While you can play through all of this with the DualShock 4, either in or out of VR, every interaction is so much more satisfying in VR with Move controllers. You actually get to hand her a tiny skateboard or juggling balls to play with. You can point or bring your hand to your face to direct her movements. And, in one of the most heartwrenching moments I’ve ever had in a game, you have to pull needle-like projectiles out of her to heal her back up to health after combat.

Falcon Age’s mechanics are so engaging in VR.

I’ve even found myself unnecessarily going out of my way to use my bird to hunt prey (for treats that need to be cooked later) just to spend more time with her in the wild. Yes, all of this can be accomplished with a few button presses on a DualShock 4, but interacting so directly with my virtual friend continually engrossed me.

And all of Outerloop’s design choices feel built to let as many people as possible explore its full, five-hour adventure. Aside from the option to play with or without VR or Move, the main menu allows you to play without combat, in case you want to just pal around with your bird.

Unfortunately,I did notice a number of technical issues in all modes. Playing out of VR and running around with a DualShock 4, the world would stutter occasionally, not always keeping pace with me. And both in and out of VR I encountered plenty of pop-in — while the grass nicely rises to meet you as you run throughout the desert world, everything from small rocks to giant background elements would either have textures that didn’t load or completely appear out of nothing. It never truly stopped me from enjoying myself, but when I’m trying to immerse myself in a VR world it can be an annoyance to have elements appearing at random.

Occasional technical issues in VR can be an annoyance.

I kept wanting to explore each element of Falcon Age’s world, though. Its ideas of robotic colonizers, falconry, and familial dynamics make for a compelling world that I wished to learn more about, so much so that its ending came all too quickly for me. There are a few reasons to go back and explore even after the end of the story, like extra collectibles and a minigame or too, which I’ve enjoyed hunting for an extra hour or so. But it’s nice just to spend some time throwing toys at my bird or walking around the desert planet with her. Outerloop’s striking, memorable landscape uses bright colors and sharp shapes to make itself distinct, rather than relying on overly detailed rock formations and grass patterns.

Falcon Age’s charming adventure made me care more for a virtual pet than I ever thought I could, and it shines in VR.I didn’t expect to become as bonded to a virtual animal as I did in Falcon Age. It got to the point where my real-life pet might’ve grown a little jealous with how many toys and how much praise this bird got. Outerloop has established a strong foundational system when it comes to exploring and fighting with your falcon, while presenting an intriguing, if sparse, world that explores some meaningful concepts. Even with some minor technical problems, I really enjoyed visiting this world and wish I could explore more of it (and put more cute outfits on my bird).