Players can download Risk of Rain 2 for $29.99 now on their respective consoles. Risk of Rain 2 was released March 28 in early access on PC. (It’ll get a full PC launch in Spring 2020, the developer said.) The original game, Risk of Rain, is a 2D side-scrolling action game beloved by its diehard fans. The sequel switches the series to 3D, while keeping the gameplay similar to its predecessor.

PlayEveryWare is responsible for the console port of Risk of Rain 2, and will handle content updates on console. Risk of Rain 2 currently includes the Scorched Arches update, “which offers the Scorched Acres stage, Survivor Rex, and The Grovetender boss,” as well as extra “items and equipment.” 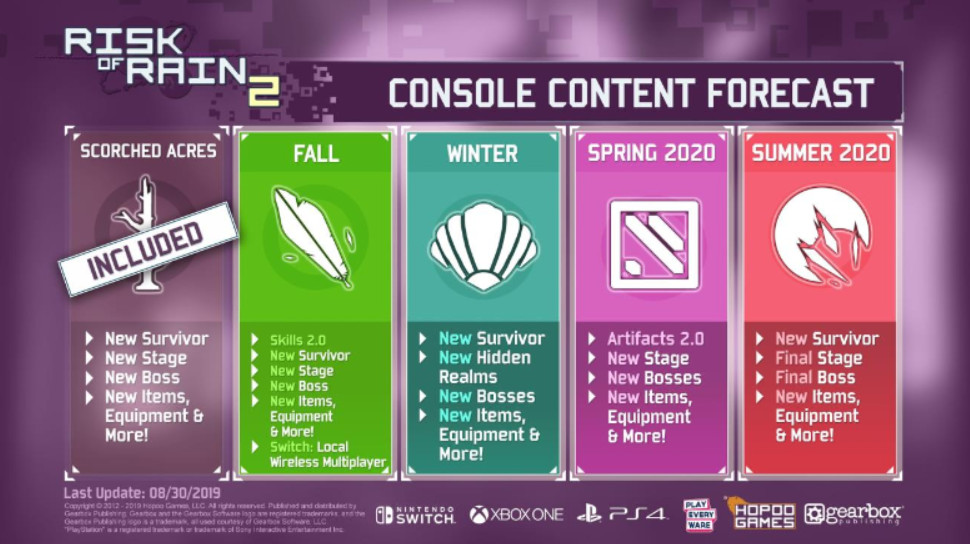 A content plan shown alongside the announcement details the rest of Risk of Rain 2’s “console content forecast.” Players should expect new skills, survivors, bosses, stages, and items through Summer 2020. The next content update is expected in September.

Hopoo Games and Gearbox also announced during PAX West that the original roguelike game, Risk of Rain, has been released on Xbox One, too.