Warframe is often so loaded with content that it can feel overwhelming, like a child trying to pull you in a dozen different directions at a theme park. Here’s a great example that is tearing me and my friends apart: Did you know they put an entire fucking third-person loot shooter MMO on my dolly dress-up game?

I initially found the aesthetic of Warframe to be off-putting. The game is most easily compared to Destiny, and character customization — creating a character, dressing them up, and experiencing the world through them — is a big deal in both of these games.

Warframe is actually closer to Warhammer 40K. Not only is the universe dark, alien, and threatening, but part of the appeal of the game is collecting a whole army of weird, threatening models.

I soon realized that the Warframes (literally the name for the character classes in the game) actually had a pretty neat sense of style. They’re not human, but they’ve got personality. Watching Khora strike a dramatic pose with a rifle over her shoulder or Garuda stride forward confidently with banners fluttering behind her expresses a ton of character. Much like Warhammer 40K, you start to realize you can apply paint to these models. And Warframe delivers here, providing you with beautiful dollies to dress up and customize.

And yes, there are pink paints. So many pinks and pastels and lovely colors that you might not find in other titles. I’m looking at you, Sea of Thieves! You’re a bunch of cowards, World of Warcraft! Give me pinks! Let me create beautiful things that have the same color scheme as Marge Simpson’s Chanel suit!

Digital Extremes provided me with the Frost Prime Warframe and a healthy dose of Platinum, Warframe’s real money currency, when I started playing. I didn’t worry too much about customization for the first few months I played. I just kind of made Frost Prime look like a radical Pop Tart and picked away at the game, playing for a few hours from time to time.

I soon realized that I didn’t have to play as the extremely rectangular, business slacks-legged Frost Prime. I could play other Warframes, like Khora (pictured above), who has a giant cat and armor like a spider’s body. Or Octavia, a dancing DJ with a giant plumed set of streamers coming out of her helmet.

Warframe has managed to create a bunch of weird, fascinating characters. Some of them are also oddly, uh, charged. I’m just going to come out and say it: things like Khora’s noble animation set or the standard Saryn frame are doing something for someone out there.

Warframe is weird, and unapologetically so. The result is really unique looking characters, and sure, there are a lot of forum topics out there with people passionately arguing about who they think is the hottest Warframe. But that doesn’t hurt me, and it has also led to a character design I haven’t seen in any other games.

Warframes aren’t alien in the sense of having facial prosthetics and maybe some blue skin; they’re alien in disconcerting and unique ways — flat, angular heads, rows of sharp mechanical teeth, legs that end in stumps or nubs. Sometimes that can be disturbing but, more often, I want to put pretty colors on these mecha murder machines and drape them in lovely capes. 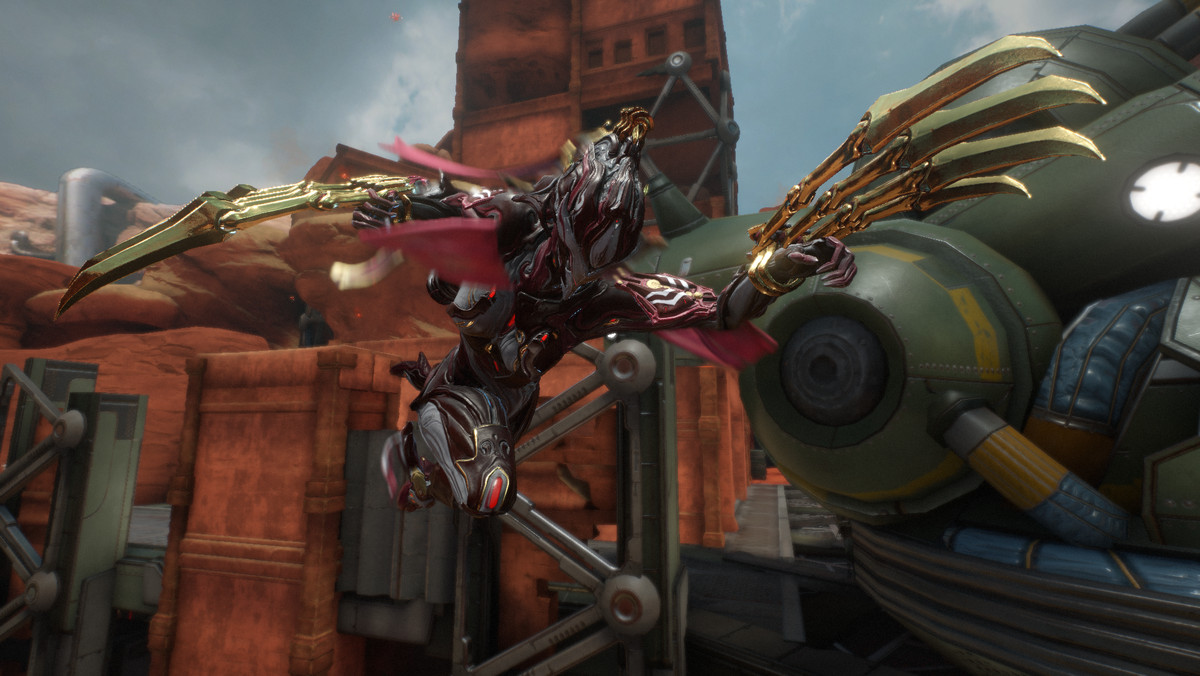 The problem comes from the fact that when I log on with my friends to play Warframe, we have differing priorities. They want to equip and upgrade mods that slowly make them more powerful, then advance the story of Warframe by completing story missions and challenges on planets. I want to play Warframe by equipping magenta paint, then pastel pink paint, then magenta pink, and then I stare at the screen for a while until I finally decide which one I want to go with.

This especially drives my husband up a wall, as I like to rush through missions and forget to check lockers for loot. I’m all about efficiency while playing the game, but when I’m decorating my ship and Warframe, I suddenly slow down and start thinking like one of the Property Brothers. I’m all about maximizing the real estate of my Warframe and adding snazzy decor that brightens up a dour-looking chassis.

I’m not the only one fascinated by “Fashionframe”, as the community calls it. There are Reddit communities like Warframe Runway (this Reddit has images that contain spoilers for Warframe’s story content) or YouTube channels run by dedicated fans. The sheer amount of options at a player’s disposal, combined with the potential of the game’s Captura photo mode, means that someone could easily sink hours and hours into customizing characters and posing them in interesting ways.

This scratches the same itch of playing with Barbie dolls as a kid — especially since my Barbie dolls tended to be deeply dramatic and violent. Sure, a Warframe is meant to be a deadly assassin and murder machine, but shouldn’t I be able to make sure they pull that off in style?

You might be wondering if this time investment is worth it. I’m proud to share that I queued up to play some Warframe with my husband Aaron and my best friend Matt. We dropped down into a Corpus base, and the camera panned out to show our frames, including the one I had painstakingly color coordinated and decorated.

“Oh, hey, nice frame!” Matt said over voice chat, and I felt a wave of satisfaction wash over me.

“Oh, thanks!” I said, and prepared to explain the path to creating such a wonderful mecha frame to my friend. Instead, he cleared his throat.

My husband hasn’t spent any money to acquire Platinum, but he managed to steal the joy away from my fashion debut. Now if you’ll excuse me, I have to take another swing at making my Warframe a star.