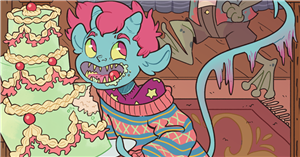 Tabletop role-playing games currently exist in an interesting space. The shipping bottlenecks and material shortages that plagued publishers throughout the last year continue, with relief coming briefly and sporadically. But the popularity of board games and role-playing games boomed under lockdowns, and it shows no signs of slowing down in the New Year.

The specter of global supply chain woes should not be ignored, though. A few of the titles on this list are only here because their publishers pushed already conservative timelines deeper into an uncertain future. Physical books are primarily composed of paper, after all. We will note the games that provide a digital version — a stopgap growing in popularity — along with those that will be fulfilling crowdfunded pre-orders before selling copies in stores or online.

Without further ado, here is our list of the 10 most anticipated new TTRPGs to be on the lookout for in 2022. Have a game you’re looking forward to in the new year? Let us know in the comments below.

2022 will be that year of TTRPGs adapted from licensed media, and everything from Avatar: The Last Airbender (put a pin in that) to G.I Joe and Transformers are exploring the pen-and-paper realm. Swedish publisher Free League might command the most promising of these experiments with the Blade Runner Roleplaying Game, which promises to deliver players into the rain-drenched, neon-lit streets of a future Los Angeles for some existential investigative police work.

Blade Runner RPG will use the Free League’s Year Zero Engine, which primarily uses six-sided dice, to explore questions of humanity in a world where the value of individual life has never been lower. The technocracy and class stratification of Blade Runner’s setting will backdrop a gameplay focus on human drama and interpersonal conflict, but it will have to contend with a pop culture malaise when it comes to cyberpunk.

Pre-orders are not currently available, but Free League expects the RPG to release sometime this year.

Magpie Games knew their take on the beloved Avatar animated series would be popular, but they didn’t quite prepare for the record-setting near-$10 million they received in crowdfunding. Avatar Legends: The Roleplaying Game will let players create their own elemental benders (or Sokka stand-ins) in order to explore a world lavishly outlined in The Last Airbender and Legend of Korra.

The studio’s expertise with Apocalypse World-inspired titles has been tweaked to prioritize stories of young people discovering the complex truths of a world at war, along with their place within it. Groups can play in five different time periods, including the era of myths and legends and Republic City’s edge of modernity. Fight the Fire Nation, discover the truth of Avatar Kyoshi’s story, or simply go penguin sledding all afternoon.

The minds at Possum Creek Games — creators of the critically acclaimed Wanderhome — have proven their ability to take a perfectly mundane premise and suffuse it with delicious melancholy and powerful magic. The small studio’s next TTRPG, Yazeba’s Bed & Breakfast, continues the trend with a slice-of-life setting that bucks more than a few standard tabletop trends. For one, the playable characters aren’t blank slates but the five fully realized residents of the establishment.

Groups will explore bounded chapters wherein guests arrive, often with a complication on their heels, prompting whoever isn’t busy with chores or cooking to attend to their needs. It could be a troubled traveler who ran away from home or the king of the forest with full retinue in tow. The resulting tale unlocks legacy elements, such as stickers, and secrets will be festooned throughout the book.

Yazeba’s Bed & Breakfast comes to Kickstarter in March, but an early-access version can be downloaded for free from the game’s Itch.io page.

The medieval roleplay of King Arthur Pendragon is a longstanding series from Greg Stafford, the game designer who helped create the RuneQuest and HeroQuest TTRPGs, among others. (HeroQuest is now known as QuestWorlds, following the reboot of the original HeroQuest board game.) David Larkins, along with publisher Chaosium, have announced a sixth edition of the sword and sorcery RPG that adapts Stafford’s unfinished “ultimate edition” for a contemporary audience.

Pendragon Sixth Edition takes place during the time of the Round Table, complete with its questing knights and well-heeled tales of heroism. Larkins is outlining the design process in a series of blog posts, wherein he says the core rulebook will be easy to pick up and learn without sacrificing the rich worldbuilding and tools groups can use to craft their own Arthurian legends.

Pre-orders for Pendragon Sixth Edition are not open, but Chaosium currently plans to release the core rulebook and game master’s book in 2022.

Space is cruel, dark, and lonesome, and the upcoming Mothership boxed starter set will easily open up that bleak experience for daring players. Published by Tuesday Knight Games, Mothership captures the horror of the blackness between stars by pitting a crew of player-controlled workers, soldiers, and scientists against the unknown with nothing but a ship and their combined wits.

The intentionally light rules and quick character creation benefit sessions that focus on exploring tight, shadowy structures that cling to asteroids or vessels listing through the inky nothing. The original game launched in 2019, but the boxed starter set will combine core rules with a selection of adventures from several notable indie designers.

Pre-orders are currently available through Tuesday Knight’s BackerKit page and is expected to ship in December 2022.

Native American and First Nation cultures have a long history of being shamelessly mined for inspiration and straight-up appropriation in TTRPGs. Coyote & Crow’s lead designer Conner Alexander wants to reclaim part of the hobby with a game set in a distant future where the Americas remain untouched by colonization, but nonetheless changed by a mysterious apocalypse.

Coyote & Crow takes place in the aftermath of that cataclysmic event, where the surviving peoples of Cahokia have learned to live in a land of often unforgiving conditions, and to wield a magic that might usher in a new prosperity. The game was even written and designed by a majority-indigenous team.

A fantasy untethered from European baggage, it earned nearly $900,000 in crowdfunding and recently put a digital version of the finished core book online for purchase through BackerKit. Physical books pre-ordered through Kickstarter will be delivered in March, but it’s not clear when and where future copies will be sold.

Auroboros: Coils of the Serpent

The Dungeons & Dragons 5E setting of Auroboros: Coils of the Serpent comes with a lot of history and talent behind it. After leaving Blizzard Entertainment in 2016, Chris Metzen founded Warchief Gaming and immediately began adapting a world he had been creating with friends since the 1980s into a new TTRPG book. The team took its first steps into Auroboros with Worldbook: Lawbrand last April, and will be fulfilling Kickstarter pre-orders in March.

Lawbrand’s loose coalition of merchant states is suffused with imagery and memories from the longtime World of Warcraft designer’s past — a burgeoning youth movement powered by music, races in the desert, and the high fantasy equivalent to Burning Man. Whether Metzen’s experience translates from MMOs to dice rolling remains to be seen.

Following the explosive success of the thrashing, gnashing Mörk Borg RPG, design studio Stockholm Cartel have turned their eyes to a future of digital noise and glaring static with Cy_Borg. The “nano-infested doomsday RPG” looks to showcase all the artistic flair and surprising approachability of its predecessor.

Set in the city of Cy, the TTRPG brings over Mörk Borg’s rules-light system that prioritizes dungeon crawling and the very real possibility of character death. It will also remain open to hacks and modification so that groups can keep only those parts of the grungy cyberpunk game that spark joy … and probably real sparks.

Cy_Borg is available for pre-orders now through its pledge manager, and crowdfunded books will ship in June of this year.

Skyraiders of Abarax is another D&D 5E-compatible setting sporting a serious nerd pedigree. Dragonlance authors Tracy and Laura Hickman have created a world of sky pirates and fantasy empire that promises to be more than a book of lore with big names attached to it.

The game system features an optional app, called the Living Tome System. It will allow players to use their mobile devices to interact with the setting books in ways that can’t be printed on a page, such as sharing secrets between players and game masters and tracking changes to the map. Pre-orders beyond the completed Kickstarter campaign aren’t yet open, but the Hickmans and their team plan to have the two-book RPG ready to ship in November.

The physical edition of the Trophy Tabletop Roleplaying Games was one of the earlier casualties of the disruption caused by the COVID-19 pandemic. It finished its initial Kickstarter crowdfunding in February 2020, and digital versions of both the core Trophy Dark book and the old-school adventuring outlined in its Trophy Gold companion book have been available for a while, but printed versions continue to be delayed.

That’s changing in 2022, according to the design team over at The Gauntlet. The collaborative storytelling system is a favorite of many well-known indie designers, but has yet to find much mainstream success due to the rash of fulfillment delays. But the doomed adventures it lets groups tell are chock full of psychological horror and meaty storytelling potential. It simply shouldn’t be missed when it becomes more readily available later this year.

Pre-orders are still available through The Gauntlet’s BackerKit page.

The 12 most anticipated new board games of 2022