Pokemon games are all about adventure. At just ten years old, you get chucked a magical creature capable of causing floods, forest fires, or debilitating poisoning, and go on your merry way. You hike across continents through a huge variety of terrain, from mountains and deserts to vast oceans and rainforests, all without so much as a sprained ankle. In Pokemon Sword and Shield, you can even camp. Unfortunately, all my simulated camping and adventuring did not prepare me for it in real life.

Unpopular opinion, but I quite liked camping in SWSH. I loved seeing my team out and about, and it was cool seeing the ‘mons of other trainers, like the camper who has a whole team of Eeveelutions. I went camping this past weekend, and I can tell you that camping in SWSH is nothing like actually camping in the U.K. 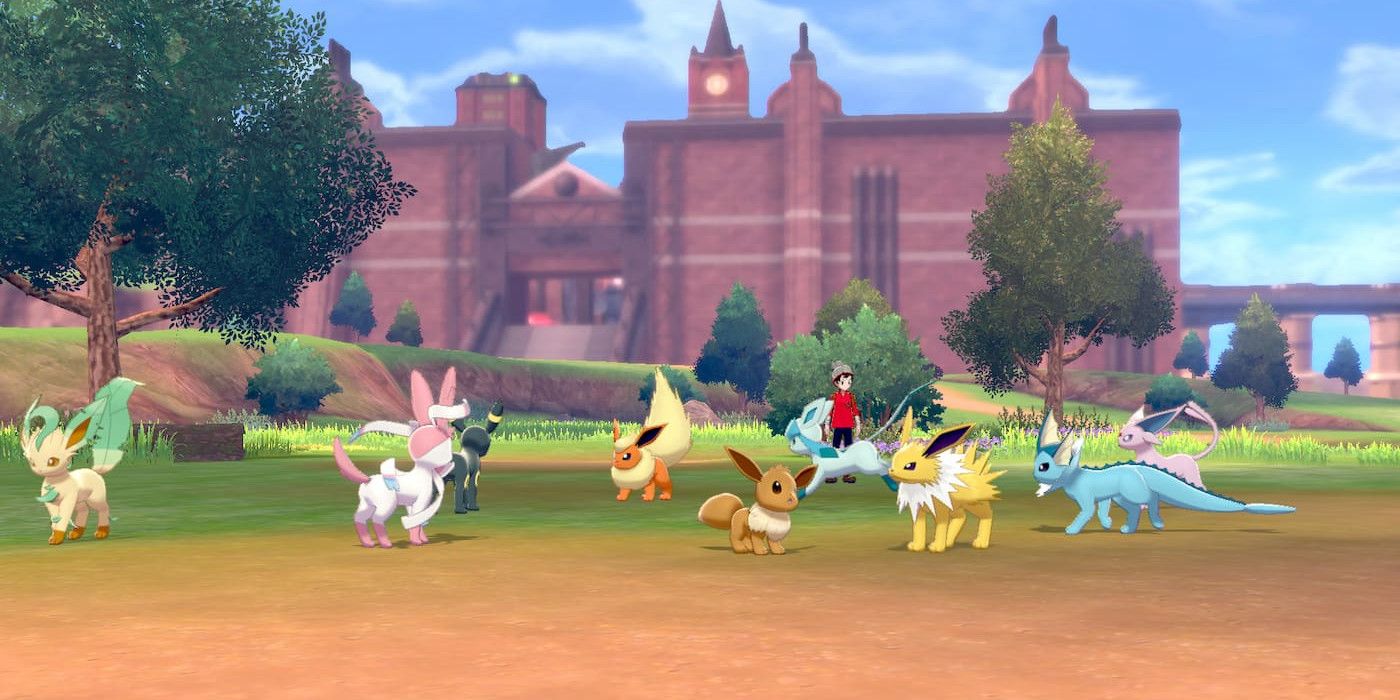 Firstly, in SWSH you can just pitch up your tent anywhere, on any route. You absolutely cannot do this in real life. The U.K. is a pretty small country, made up of four even smaller countries. In England, almost all of the land is privately owned. In fact, half of England’s land is owned by less than 1% of the population. The roots of this date back to the Norman period when aristocrats – lords and barons and what have you – were given huge swathes of land to watch over. The modern-day effect of this is that wild-camping – the closest approximation I have to the camping in SWSH, where you just set up anywhere – isn’t strictly legal. The laws on it differ between each U.K. nation, but in England, anti-trespassing laws are incredibly strict – Scotland is basically a free-for-all, but it’s quite far away. Fortunately, Wales is close by and has some great – legal – wild-camping spots, so I headed west in pursuit of dragons and adventure.

The second fallacy posited by SWSH is that a child can merrily run around the country with an entire camp and cooking equipment inside their backpack. Nonsense. With the kind of backpacking camping seen in Pokemon, you need to pack as light as you can because you carry all your gear on you. The tent I bought only weighed one and a half kilograms, but it was the size of a small coffin. The only thing I could do in it was sleep like a mummy. I’m not a tall person by any means – although I am taller than a Charizard – and my head and feet touched both ends when I laid down. The tent in SWSH is huge. It’s a mansion by comparison. If we compare the tent in the picture below to the Coalossal standing next to it when can deduce the tent is around nine or ten feet high. In other words, it would weigh far too much for a kid to carry around. If you want to wild-camp, luxury is out of the question. 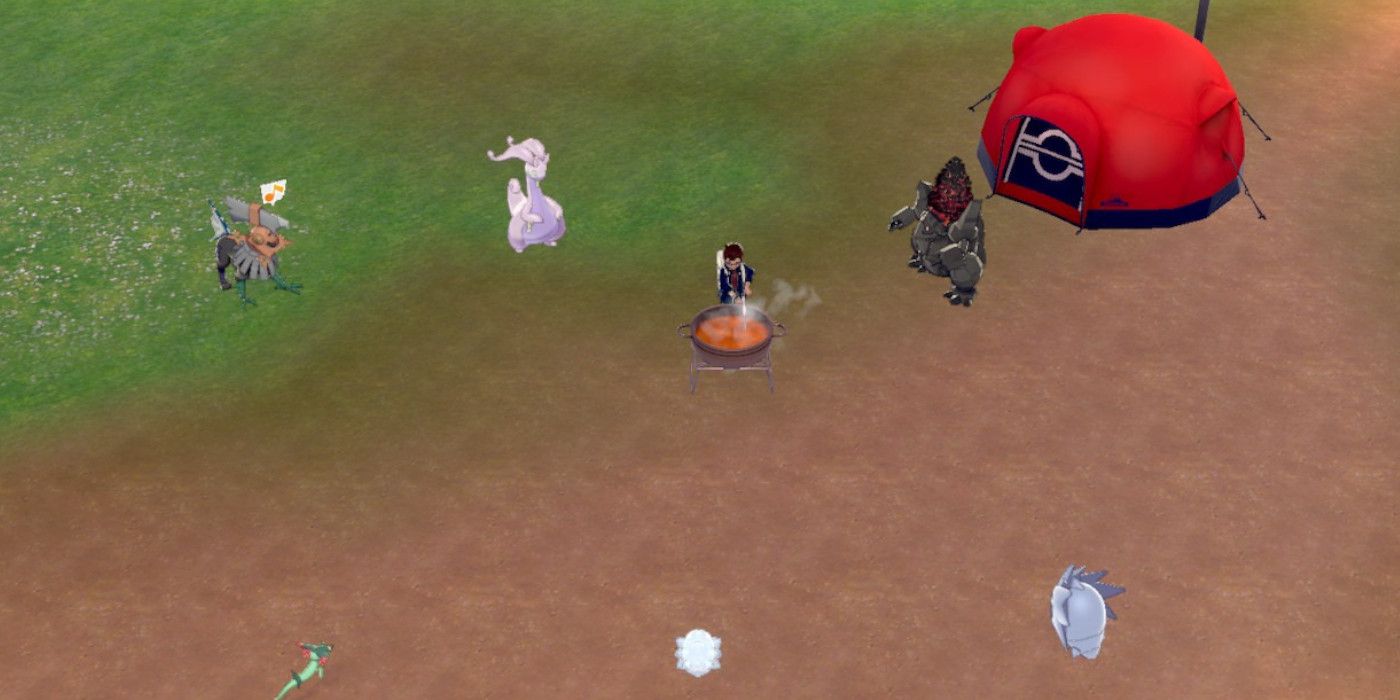 My third issue with camping in SWSH is less about camping and more about hiking to and from different campsites. In earlier Pokemon games, getting the Running Shoes meant you could finally zip around at more than a snail’s pace. no stretching, no cooldown, just sprinting from town to town. Ten-year-olds may be able to do this, but now that I’m in my mid-twenties, my joints cannot. Within thirty minutes of arriving at the wild-campsite, I’d pitched my tent and gone off for a hike up some big hills. I lost track of the trail early on, but I could see the top of the hill so I just pushed on. This was a mistake. Contrary to what Pokemon would have you believe, you can’t just walk and run over uneven terrain willy-nilly. I did my left leg in just as I got to the peak – and it was bad. I had to hobble down and back to camp, where I could barely move my leg for the rest of the day. It still hurts now. They don’t have it in Pokemon, but if you go camping IRL, take some Ibuprofen with you.

The fourth thing camping in SWSH messes up is the food situation. While I did sit around a campfire with friends and cook, I wasn’t cooking lovely fresh curry. I ate a boil-in-the-bag rice and vegetable meal that somehow doesn’t go out of date until 2023. I don’t want to think about what’s been done to that food to make it safe to eat for that long… You can’t pack a huge pot like the one in SWSH, at best, you can find space for a little camping stove and an all-in-one knife, fork, and spoon – a spornk? I mostly ate snacks that were high in sugar and carbs. When you’re outside, you burn a lot of energy just trying to stay warm, so you need dense food, that’s quick and easy to prepare. Even though it wasn’t fresh, the boil-in-the-bag meal was surprisingly nice, but that may have been because it was the first meal I’d had since doing a four-hour hike. 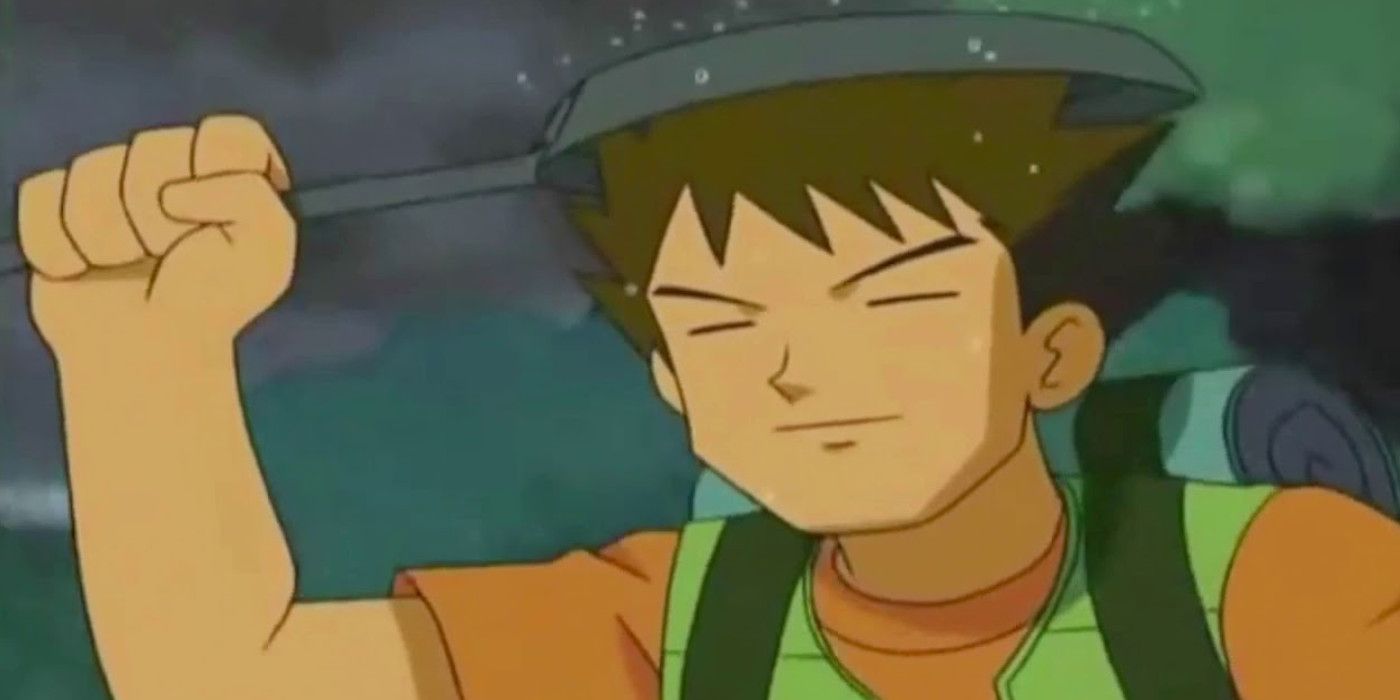 Finally, there’s the weather. The worst part about camping is getting cold and wet. Cold is fine, wet is bearable, but both together are a nightmare. The kid heroes in Pokemon don’t seem to be phased by the elements one bit. Maybe battling creatures that control said elements dulls you to their effects? More recent games have allowed us to choose our character’s clothes, so we can woefully under prepare them for snow, or the desert, but they never seem to mind. As soon as the sun started setting I put my thermals on under my waterproof jacket and fast-drying trousers. While we cooked, I dried my socks and gloves on rocks by the fire. Trench foot is no joke, and the kids in Pokemon are going to get it if they don’t wear the proper footwear in rainy conditions.

Ultimately, while camping in SWSH didn’t prepare me for camping in the real world at all, I still have a blast doing either. It feels good to take a break from the battling to connect with your Pokemon in SWSH, and it feels good to get out of the city, lose your phone signal, and camp by a stream for a couple of nights. It’s important to stop and enjoy nature every once in a while. That part of camping Sword and Shield got right.