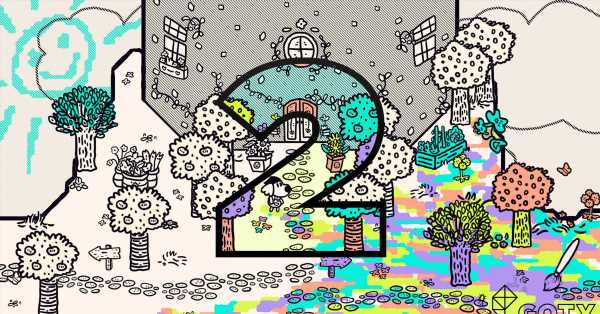 The protagonist of Chicory: A Colorful Tale is perhaps the most relatable character of 2021. It’s not because this dog rocks cool t-shirts and constantly calls home to ask their parents for help. It’s because they’re dealing with acute self-doubt and burnout.

For our 2021 game of the year coverage, Polygon is celebrating our top 10 video games with a collection of essays. You can see our full Top 50 list here. Throughout December, we’ll also be looking back on the year with special videos, essays, and more!

At the beginning of Chicory, I take control of a dog I named Pasta, who also happens to be the janitor on duty when they find a magical paintbrush laying on the floor. The brush belonged to Chicory, who holds the position of “Wielder,” a term for a powerful artist and leader who colors the world. When we start, Chicory has disappeared, along with all the color in the world, and so it falls on our excitable puppy dog to bring color back.

Chicory’s overworld is filled with charm — it’s named Picnic and all the characters are named after food. The game, developed by Greg Lobanov and a small team of artists, looks like a giant digital coloring book that I paint as I move Pasta throughout the map. Each zone has its own set of colors: An area called Supper Woods has fall colors like gold, crimson, and orange, while Gulp Swamp uses a lightened color palette of lime and blue-green. As you explore and overcome challenges, you unlock new kinds of brushes and stamps.

True to the expressive nature of the game, painting is a breeze, and you don’t actually have to be artistic to color pretty scenes. At one point, I figured out how to create a fun effect by laying down a solid color and then rolling my mouse’s scroll wheel to alternate colors quickly with the striped textured brush. For any person who grew up using wacky brushes in game series like Kid Pix, Chicory is a joyous return to that childlike practice. And while I often found myself unleashing pure scribbling chaos, in some moments, I would take a break and color the entire scene in more detail as a way to pay reverence to the world. At one point, I ran into Hummus, a Koala whose friend passed away recently. I colored in the full scene as a way to express my respect for him, his lost friend, and the beautiful water he sat beside.

Other than the painting, the game largely functions like a top-down Zelda game, so much so that it feels like one of the most meaningful iterations on the formula since A Link To the Past. Like in Zelda, a lot of puzzles center around relatively basic actions: moving and blowing up bombs to clear paths, arranging platforms to navigate from one side of the screen to the other. But now there’s the brush.

The magical tool opens up a new slate of mechanics and gameplay to use in puzzles. Bombs can be activated remotely with the press of the paintbrush. Some platforms can be painted on to bring them to their desired location. I do this puzzle-solving without moving Pasta and just by painting the scene. Pasta can move through the world as I paint it as well – one technique allows my little dog to swim through paint and up walls, just like in Splatoon. (The only drawback is that the paper-like top-down graphics style can make some 3D platforming elements difficult.)

With such a solid gameplay base, Chicory would be a perfectly fine game if it were about nothing. But Chicory also brings a poignant story about self-doubt, burnout, and the ways in which we can nurture ourselves during times of confusion.

Upon becoming the Wielder, Pasta faces doubt, both expressed by others and internal. One of the first conversations you have in the early game is with Blackberry, a previous Wielder, who tells Pasta that they don’t look ready to wield the brush. On many occasions, Pasta’s earnest and can-do attitude is peppered by their own self-doubt. They asked Chicory, “Are you really sure it should be me?”

Pasta, remember, wasn’t even supposed to become an artist. They were a janitor. Later on in the story, still, Pasta faces the manifestation of that self-doubt in the form of a boss fight and fights through it.

Opposite to Pasta stands Chicory, the previous Wielder and namesake of the game. The hare is a talented artist who one day just gives up on becoming the Wielder and locks herself in her bedroom. We see her at her most vulnerable, curled up in the fetal position in her bed. She can’t hold a conversation with Pasta, let alone paint. Chicory, like the two Wielders who are still alive and came before her, no longer wishes to paint. Painting is hard when it’s for others, another Wielder tells Pasta. We find her painting and erasing brushstroke after brushstroke, early on in the game.

So what carries Pasta — and us as the player — through this draining journey that has burnt out previous Wielders? Well, not being too hard on ourselves, mainly. In a particularly touching moment, Pasta can grab pizza with their sister Clementine, where she reminds you that it’s OK to say no sometimes. These are the words from a character that I carried the most with me while taking on the adventure and responsibility of the Wielder.

The thing is, the game gives us ample ways to take it easy, as long as the player takes advantage of them. As far as difficulty goes, boss fights are generous with checkpoints, and you can always call home to ask Mom or Dad for hints. There’s no need to beat yourself up to figure out a puzzle because your dad will just tell you what to do. When you bring even the smallest amount of color to a scene, you see the ripple effects through the characters you meet.

At one point I found myself frustrated by a series of puzzles and had to backtrack a bit to make sure there wasn’t another route through the forest. It was then when I saw a pig standing nearby. “I love what you’ve done with the place,” they told me, complimenting my color schemes. The scribbles weren’t exactly artful, but the pig was right — it sure looked a lot nicer with some splashes of color.

Regardless of Pasta’s self-doubt and the pain they see carried by those around them, the game’s world cares for both Pasta and the player. It’s a game about a dog who paints, but more importantly, it’s about imposter syndrome and burnout. Chicory: A Colorful Tale is balm for the weary soul or anyone who has felt confused and directionless. It doesn’t tell us that everything is going to be OK, and isn’t even that cheery of a game. But if you open yourself up and show your colors, well, it just might make someone’s day.