Astral Chain is one of our most anticipated games of 2019. The Nintendo Switch exclusive from PlatinumGames about demon-fighting future cops is directed by Takahisa Taura, who last served as lead game designer on Nier: Automata. Similar to Automata, Astral Chain appears to merge action combat with a complex story and a bunch of quirks — for example, players are invited to collect and dispose of trash.

We spoke with Taura through a translator at E3 2019. Our interview digs into Astral Chain’s origins, the game’s depiction of the police, and what the project does and doesn’t have in common with Pokémon.

Polygon: How is the game structured? Is it open-world? Level-based?

Takahisa Taura: There are several separate levels that are linked together by the base, which is the police station. Essentially, crimes or incidents will occur, and the player will leave from the police station to go to the crime scene, where they will battle enemies, investigate crimes, and look around and find things.

You can go back to the levels that you’ve already cleared and try to replay them. You know how Bayonetta proceeded in a linear fashion and Nier [Automata] had kind of those large, open areas where you could explore and find additional things? [Astral Chain] is in the middle of those two.

In the past few years, cyberpunk has become trendy again.

First off, I should start by saying that we didn’t start working on Astral Chain thinking we’d make a cyberpunk game. We were actually trying to make a fantasy game where you would use magic.

What you see now is the result of talking a lot with Nintendo along through the development process, because we realized that there were lots of other games set in a fantasy setting. We wanted to make Astral Chain stand out among other games. And that’s what you see now.

So it evolved from fantasy to cyberpunk?

While we were making it, actually, I was influenced by a lot of different anime that I liked. For example, Ghost in the Shell and Appleseed. And we used designs like that as a motif to build the setting that you see before you now.

Were there other films or books or media that influenced the visual design, particularly of the future city, the Arc?

I should mention that Masakazu Katsura is the character designer for this game. He draws a manga called Zetman. Which is another type of science fiction manga. A lot of what you see before you is influenced by the type of environments of his manga.

Astral Chain is the result of all the types of Japanese anime and other things that I like, put into one place.

I obviously don’t know how your team makes its game, but something I enjoy about each of them is how it feels like they’re pieced together throughout development. Not stuck to a rigid plan.

As a result, the games feel very big. With Astral Chain, you have both human and legion combat; you can also pick up trash and solve mysteries as a cop. Is this how development works for your team — this method of evolving a project or adding to it throughout the process?

You’re right, first of all.

The seed, the first idea, for this game was having two characters you could control at once. But the games are made fitting around one basic concept. So for example, with Bayonetta, there’s the Wicked Weave, the demon punch, where the giant hands come out, that was the core concept that game built around.

You may have seen on Treehouse Live things like [the hero] picking up the empty cans or visiting the hidden toilets. That’s the stuff that we add in continuously throughout the design process.

I love the toilets. There’s something mundane about them, and I say that as a compliment. You don’t see people in Star Wars go to the bathroom. Why is it important for you to give players these opportunities to pick up trash or go to the bathroom?

The first thing that we started with, when developing this game, was the character customization system. We wanted the player to feel like they are, or that they could become, the police officer.

We wanted an experience where the player, as a police officer, is doing the very daily things. Collecting aluminum cans, finding toilets, buying products from the machines as well. That way they could become immersed within the world of the game.

In the United States, playing as a police officer in a video game is complicated. Our country deals with police brutality and police shootings. I recognize in Japan that the police are very different. Can you tell me what the perception of the police is in Japan, and how a Japanese audience responds to playing as the police?

Hmm. Let’s see. Well, I don’t think there’s people within Japan who have an extreme view on the police department.

Through this game we want to give the police the image of being a hero. You can’t do things in this game like hurt people. We want to have the player feel like they’re being heroic as they progress through the game.

Also, I think it’d be good, too, if you generally have a negative image of the police, but you play through this game, that your image or opinion of the police changes as a result of playing the game.

It’s great that players will be able to create their own character. But with your last game, Nier: Automata, people fell in love with the lead characters. There’s lots of fan art and cosplay. Are there characters in this game, maybe not the player-controlled character, that you think people will have that kind of affinity for?

Around the main character, there are other characters who are heavily involved in the plot and show up. And I think that among those characters, there are those that will be liked by the fans.

But the influence and appearance of the characters is really heavily influenced by Masakazu Katsura. So it’ll be very difficult to actually realize those designs in real life in terms of cosplay.

I want to dig into the gameplay again. So our character is a rookie in a special police force called Neuron. They fight interdimensional demons called Chimera. And they wield living weapons called Legion.

Are the Legion also Chimera who have been weaponized?

Yes, that’s correct. The Legions started as Chimera, were captured, and have been put under control. They have armor attached to them and also have a mental synchronization with their wielder. 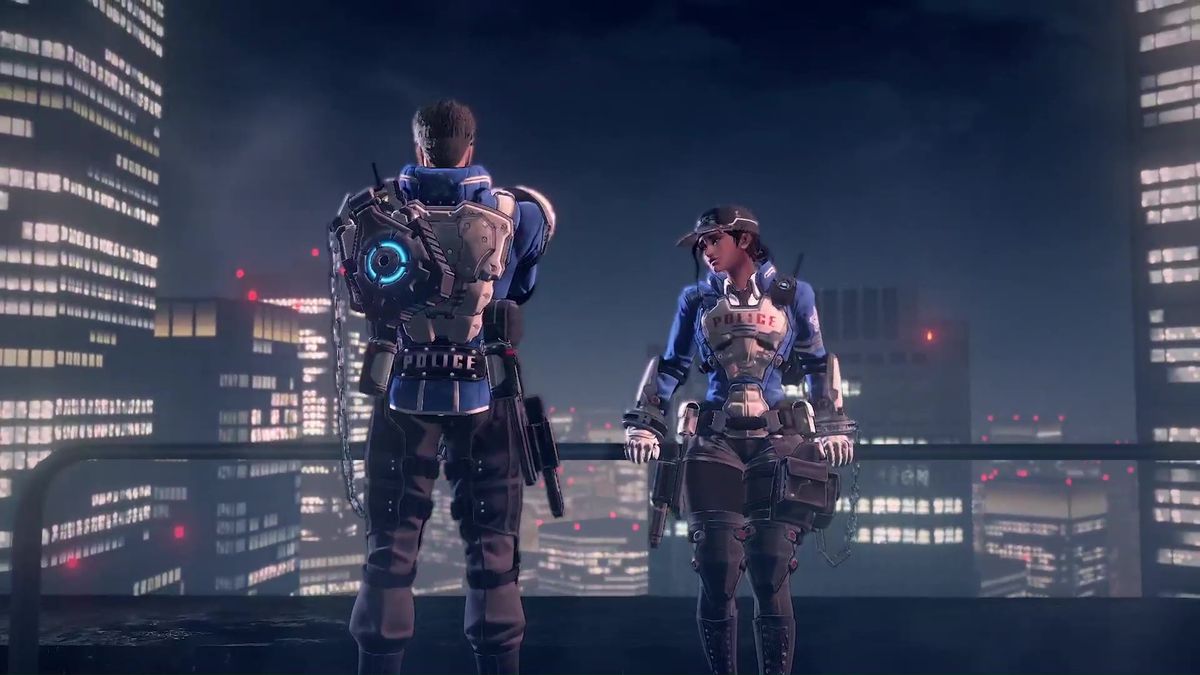 Do they want to help the Neuron? Or are they brainwashed? Or enslaved? The gameplay demo reminds me a little of Pokémon; particularly the idea of the beasts being trapped in their ball forever. Is that similar to how the Legion work?

It’s kind of like Pokémon in that sense, but it’s different from them in that the Legions are connected by a chain that creates a mental link between them and the main characters. In the beginning, they’re not as obedient as they get later on. But they come to understand each other better together.

It’s not so much about the Legions’ minds changing psychologically. It’s rather that, earlier on in the story, when the player first gets the Legion, the player and Legion operate as two separate things. But as the story progresses, since the player and the Legion are synchronized together, they begin to fight as one.

Staying on the gameplay, you said the very core idea of the game from the beginning has been controlling two characters at once. In the gameplay, the chain connecting the hero and the Legion wraps around enemies, tying them up, tripping them. Where did the idea come from for weaponizing the string that connects the two characters?

Now that we’ve got a chain between these two characters, we decided to use that within the gameplay. Whether that’s using that chain to wrap up enemy characters, or pulling it tight to trip them, at the time of development we kept putting out ideas like that to better use the chain.

I don’t know if you know about this, but this is an old arcade game that we were influenced by called Libble Rabble.

I’ll check it out. For your last game, Nier: Automata, director Yoko Taro incorporated lots of heavy themes and philosophy. Questions of existence were the backbone of the story. Is there a similar thematic backbone for Astral Chain?

Yoko Taro thinks of games from the scenario first. Once you have the scenario in place, then you build out the game and everything else. But the central pillar of this game really was this idea of controlling two characters at the same time, and thinking of things like the scenario and the world after that.

I just have one more question. What does success look like for this game? And by that, I mean, a year after the game comes out, what would you need to see for this game to feel like a success? Would it be lots of fans dressing in cosplay? Maybe that the game changed people’s minds about a certain topic? Or maybe it’s just that the game sold a lot of copies?

Thinking about it on the business side: if it sells well and puts us in the black.

But as far as my personal feelings are concerned, if even one person comes up to me and says that they played the game and it was great, then that would make me extremely happy. And I’d like you to be that person. [laughs]

Astral Chain is scheduled to be released Aug. 30 on Nintendo Switch.