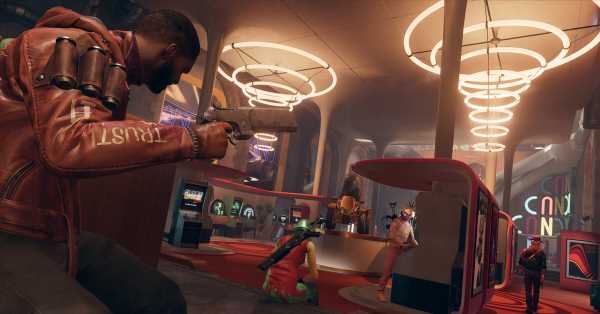 I didn’t expect to like Deathloop. Don’t get me wrong, I loved its vibe from the moment I saw the first trailer. A ’60s murder thriller with classic spy vibes? What isn’t there to like? But knowing Deathloop was an Arkane joint had me skeptical — I’ve always enjoyed Arkane’s worlds, but seldom the way the studio marries gameplay and story. Still, hearing it was one of the best games of the year, I dove in feet first. And I found a playground that finally let me engage in my preferred playstyle without mucking up the story.

Deathloop’s world is inherently chaotic. Using Colt’s own vernacular, he’s on Blackreef to fuck shit up and he doesn’t care who gets hurt in the process. It’s pretty clear from the beginning that Colt isn’t the best guy, but the rest of the Visionaries on the island — Colt’s foil Julianna included — are seemingly worse. And so, Colt’s journey is one of violence. I’m a wrecking ball, whether I decide to live up to that name or be the stealthiest wrecking ball that’s ever existed is up to me.

There is no concern for good and evil in Deathloop. There is no good ending or bad ending, no high chaos or low chaos. It’s calculated destruction done quiet, done loud, or somewhere in between. But how I choose to enact my violence doesn’t change what the game thinks of me. Colt is the least monstrous of the monsters no matter what I do.

This runs contrary to the Dishonored series. I love the worlds of Dunwall and Karnaca, but Corvo, Emily, and The Outsider have some concern for how things are done. There are consequences to my actions in Dishonored. If I kill every human around me, the world changes for the worse. But if I play stealthily, non-lethally, maybe I can leave the world a better place than I found it.

Arkane has always lived off the “play your way” idea, and that’s something I liked about Prey. However, Prey offers a level of isolation that I don’t love in my games, alongside a good deal of stealth. Compared to both Prey and Deathloop, Dishonored hits back with consequences based on your playstyle. Sure, you can play your way, but only if you’re willing to live with what happens next. I could steal some Sun Chips from Target the next time I’m there, but that doesn’t free me from what might happen next — namely getting my Sun Chips taken away from me and I told I’m unwelcome in my local store.

The morality system has always been a roadblock between me and loving Dishonored. I like to play a bit sneaky in games like Dishonored and Deathloop. But Deathloop treats stealth like a pass/fail test that results in murder when I get caught, and inevitably devolves into sprinting around the map, teleporting, and stabbing baddies. I normally prefer to take the moral high ground in games (I’m a Paragon purist in Mass Effect), but I also like to “fuck shit up.” Those two approaches are mutually exclusive in Dishonored, but not in Deathloop.

To Arkane’s credit, I recognize this is a me problem. Dishonored’s story and morality system is interesting because it has consequences, and the way that connects to the game itself almost feels like commentary on games like Uncharted, where Nathan Drake gets to have his murder cake and be a morally good hero, too. In Dishonored, you wield power responsibly or irresponsibly, and the world reflects your actions.

But while I appreciate Dishonored’s willingness to “punish” the player for being a jerk, it’s Deathloop’s lack of consequences that make it playable for me. Deathloop’s freedom is in how I execute the bad guys around me, regardless of the many bodies I leave in my wake. I can complete the story and break the titular loop, or I can run around completing side puzzles in Arkane’s toybox — those are my only two choices as Colt. And any story consequences I get from finishing the game, negative or positive, play out regardless of how I complete my mission.

In a way, this actually makes Deathloop a simpler game than Dishonored, and to some, I imagine, less interesting. It has less to say about the way we, as players, engage with video games. It doesn’t provoke much thought around the morality of your actions. Sure, Colt and Julianna may chat about how bad everyone on the island is, but I don’t get to choose if they live or die.

For as gloomy as Dishonored is, it’s an optimistic story. One noble assassin can change the world without leaving it in darkness. Deathloop doesn’t care about all that. It’s confident in how grim the outside world is. But for Colt, he’d rather live in the real world than be trapped on an island reliving the same day over and over again.

Deathloop doesn’t abandon story in favor of gameplay, but it simplifies it. By removing moral choice from the equation, it frees me up to play the way I want without fear of retaliation. I enjoyed every moment of Deathloop because I never worried about what ending was coming my way — I was as unconcerned with the people around me as Colt was. For some, that may make Deathloop the Arkane title with the least to say about the morality of its own world. But for me, the disinterested chaos of Deathloop’s world finally let me feel free to play my way.