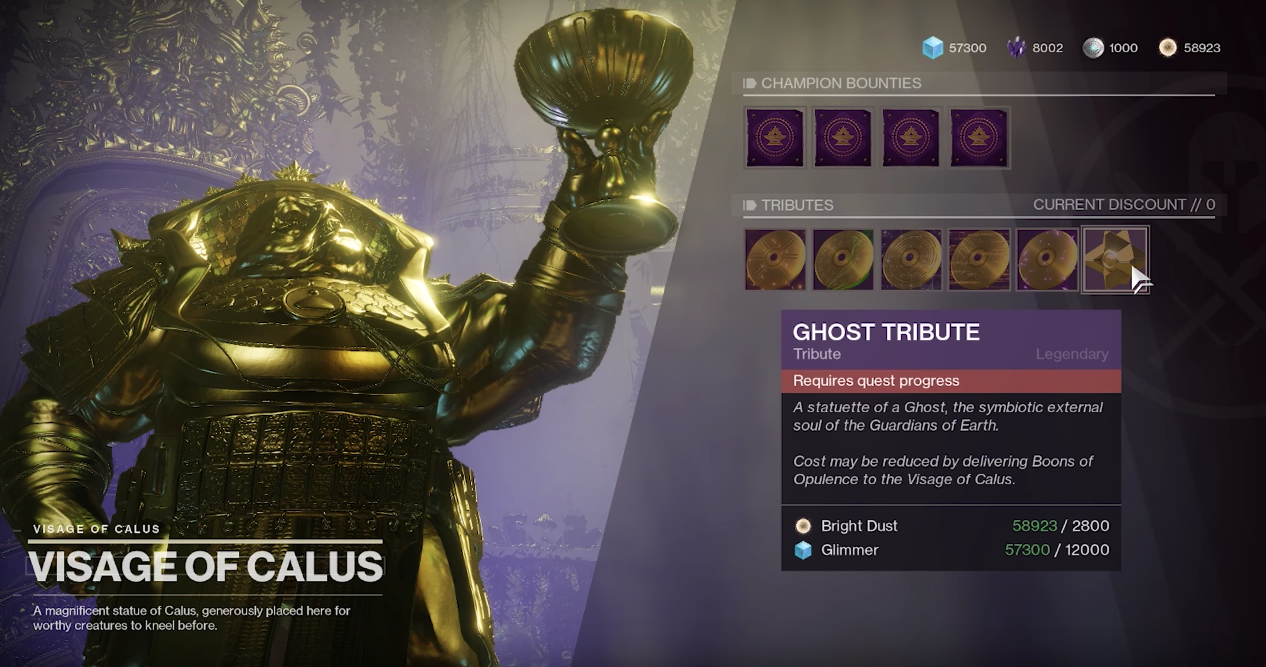 Complete them – likely public events, strikes and whatnot – and return victorious to the Tribute Hall to see the golden one with a Boon of Opulence or two.

This is where things get tricky, or really expensive.

You now need to use the item he gave you on the floor behind him on the right-hand side triangle. This will unlock the Tribute Hall proper. This is where you put various trophies that you can earn and buy. There are 30 to buy, all of which cost a set amount of resources and Glimmer. You can reduce the cost of them by 1% for each Boon of Opulence that you hand in, up to a whopping 80%.

You can also unlock some via certain triumphs, some of which include handing in a certain number of Tributes. It sounds odd, but it’s not actually all that complicated. There are a total of 50 Tribute Hall statues at present, all of which you can unlock if you want. To get access to Bad Juju, you need to hand in 18 of them.

Step 5 – Complete The Other Side Mission

Once you’ve handed these in, you’ll have access to a mission called The Other Side, which can be accessed by going into the centre of the Tribute Hall and interacting with the chest.

This will let you go into the Ascendant Realm where you need to fight your way through hordes of enemies and do some tricky platforming before eventually coming back out into the Tribute Hall.

At this point, you’ll be able to grab the Bad Juju for yourself.

If all of that sounds like too much effort, there is an exploit that currently works, but that will probably be patched out very soon (likely next week).

You can have a read of it here on Reddit or by Forbes’ Paul Tassi. Since this is (most definitely) going to get patched, do it now if you don’t mind being a little sneaky.