The GOG games storefront has given us one of the most festive gifts to celebrate the finale of this blessed year—a free copy of point-and-click classic, I Have No Mouth And I Must Scream. Hopefully you will have redeemed this on GOG by Christmas, but if you didn’t, do consider picking it up for $6 at GOG anyway. That said, it’s not a game most people would consider as a festive send-off to the year, nor will it leave you walking away from it with good cheers and belly laughs. But I’m not like most people, and this year isn’t like most years either; we are still grappling with the effects of a global pandemic, billionaires have gotten richer during this calamitous period, and NFTs look set to become a long-term fixture in a year where the ocean caught on fire and extreme weather disasters are rampant. Misery loves company! Wallow in abject despair! Screw the feel good stuff—there’s still time to inject one more moment of righteous anger straight into your veins before the year ends.

So where was I? Yes, I Have No Mouth And I Must Scream is adapted from a macabre short story of the same name by acclaimed sci-fi author Harlan Ellison, himself an abrasive figure who frequently hurled a litany of lawsuits at folks who he believed plagiarised his work, mailed a dead gopher to a publisher for a breach of contract, and got pissed off when his apology to author Connie Willis for groping her wasn’t accepted quickly enough. The tale of I Have No Mouth, in essence, is about a sadistic supercomputer known as AM, whose immeasurable hatred for humanity led to it killing everyone off except for five poor souls, which it sought to torment, repeatedly, for eternity, or until its unceasing anger is sated. While the game’s setting is largely similar to the short story, the game eventually diverges from the original, which is about the unfortunate crew setting off to look for food in AM’s uninhabitable universe. Instead, AM dangles the promise of eternal freedom to them in the game, in exchange for a ‘secret game’ they have no choice but to play. As these five characters, you’ll need to explore the surroundings that AM has tossed you in—which are designed around their worst fears—while learning more about their secrets. At the same time, you’ll need to make deeply ethical decisions most of the time, which can determine how the game concludes.

I Have No Mouth, released in 1995, was built upon the foundation of the classic point-and-click formula—you’ll walk around the landscape, talk to people, discover and use items, and even modulate each character’s morale. However, it’s a game that’s clearly a product of its time; not only was incredibly buggy, it also contains a deeply controversial scene around Ellen, one of AM’s five victims, on confronting her sexual assault. Even getting to the bleak, unsettling scenarios and backstories of the victims can be challenging, as these can be obfuscated by the game’s endlessly obtuse and frustrating puzzles—one that Ellison himself, who had a heavy hand in writing the expanded version of this tale for the game, was pretty darn smug about. “I created it so you could not win it. The only way in which you could ‘win’ was to play it nobly. The more nobly you played it, the closer to succeeding you would come, but you could not actually beat it,” said Ellison in 2013. 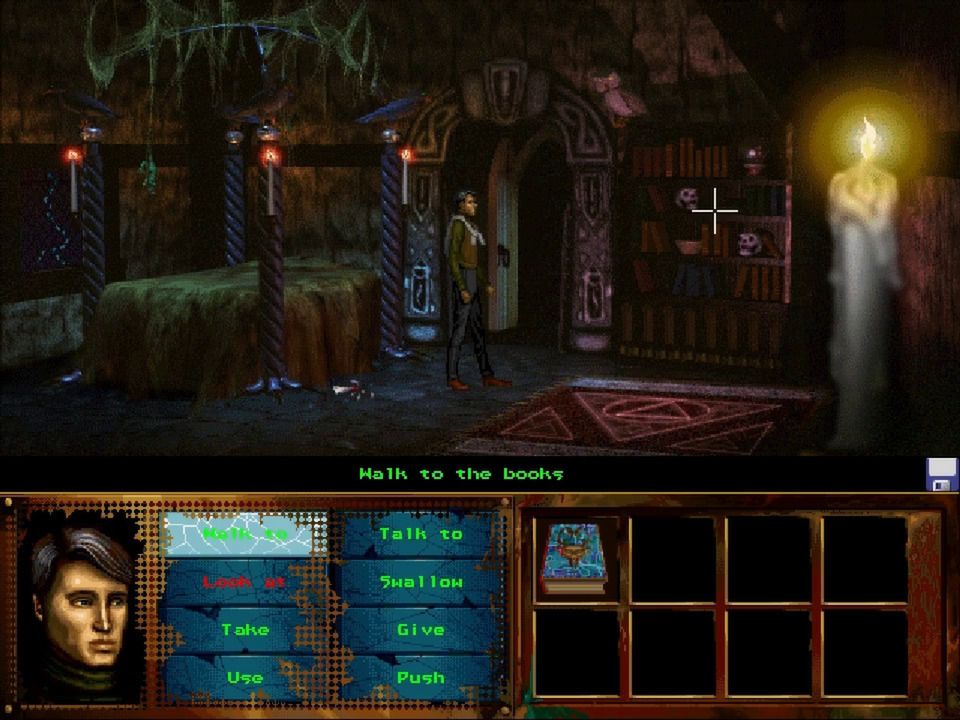 Despite what Ellison suggested, however, there is a way to “beat” the game and defeat AM, even if that ending is tucked away under layers of inscrutable puzzles and stories around moral quandaries. My suggestion is to grab a walkthrough while you’re at it. And if you can stomach all its unpleasantries, I Have No Mouth will challenge your expectations and tolerance for the pits of humanity, as it tells a grave, cautionary tale about the abuse of technology, the whims of a malevolent god, the meaning of sentience and free will, and—this may surprise you—the importance of community and sacrifice. All of which, I believe, sums up the crapsack year of 2021, and may just ready us to tackle the challenges and obstacles of the brand new year ahead. Happy holidays, fellow miserable bastards.