There’s a saying in the Warframe community that “Fashionframe is the true endgame.” When I first heard it back in 2015, it was widely interpreted as a criticism of Warframe’s shallow endgame. Seven years later, that statement is taken much more literally. Tenno used to farm raids or T4 Void Survivals for a 5 percent chance of some rare item. Nowadays, players farm for perfect Riven Mods to sell on the market for thousands of Platinum—Warframe’s premium currency. And in true endgame fashion, players use that Platinum to buy the galaxy’s best color palettes and attire. I have to say: the Fashionframe endgame is Warframe at its best.

To prepare for The New War content update, I jumped back into Warframe a few weeks prior to start upgrading my Necramech and Railjack—two vehicles that were going to be used in The New War quest. Like most returning players, I spent the first few days farming Isolation Vaults and certain Railjack nodes to get the Mods and parts I needed. I’m no stranger to Warframe’s lengthy grinds, so this was par for the course. 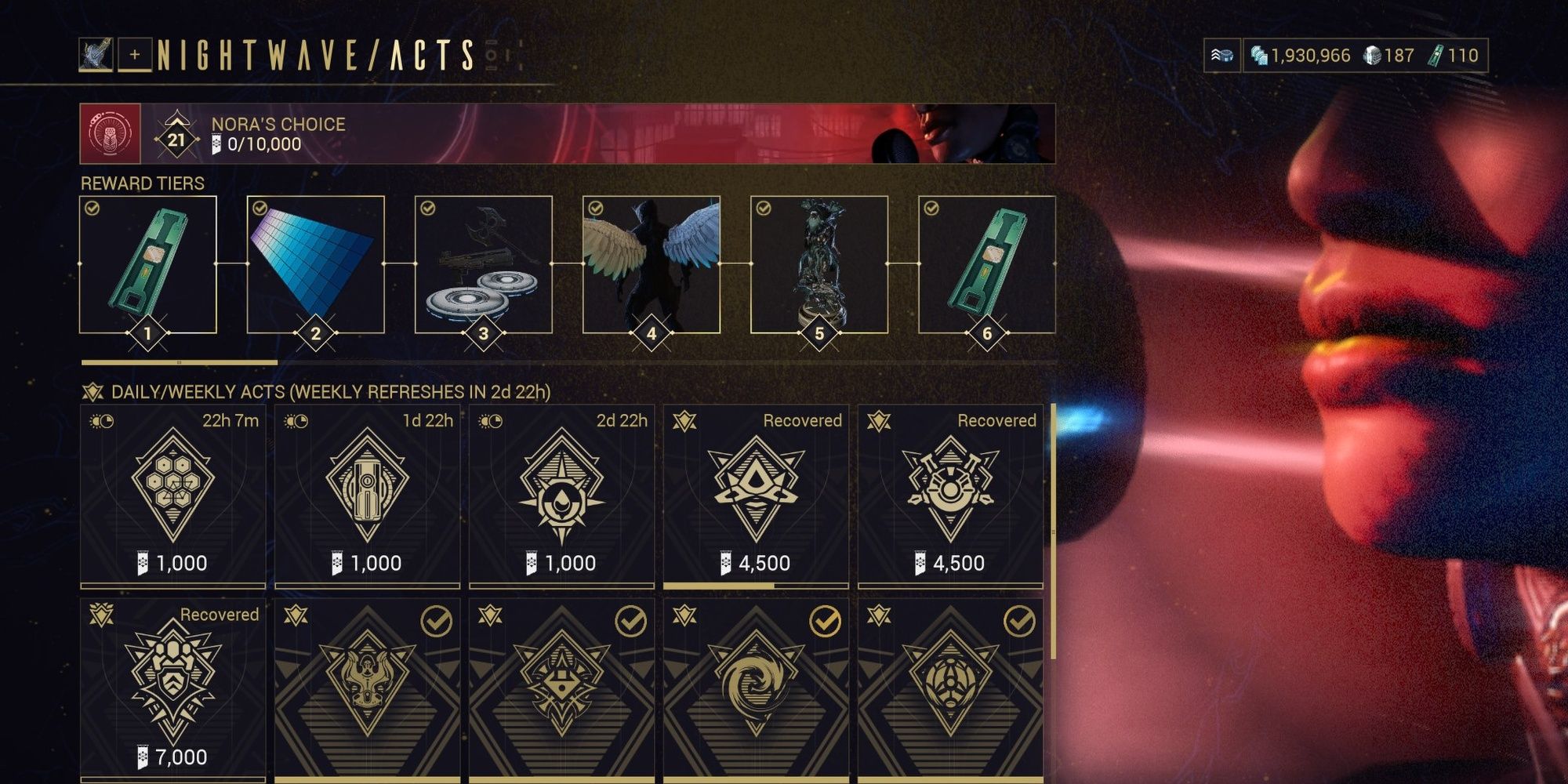 Some of the Mods I obtained from farming ended up being quite valuable. I sold some of my spare Necramech Mods and Relics to earn a nice sum of Platinum. Most of it went towards purchasing unowned Mods and Forma. I didn’t have much Platinum left, but I did notice that I leveled up my Nightwave—Warframe’s take on a Battle Pass. One of my rank-up rewards was an Ephemera that gave my Warframe a pair of wings.

I spent the next few hours toying around with some of my Warframes, giving them custom color schemes and armor attachments to pair with my new set of wings. The results speak for themselves. 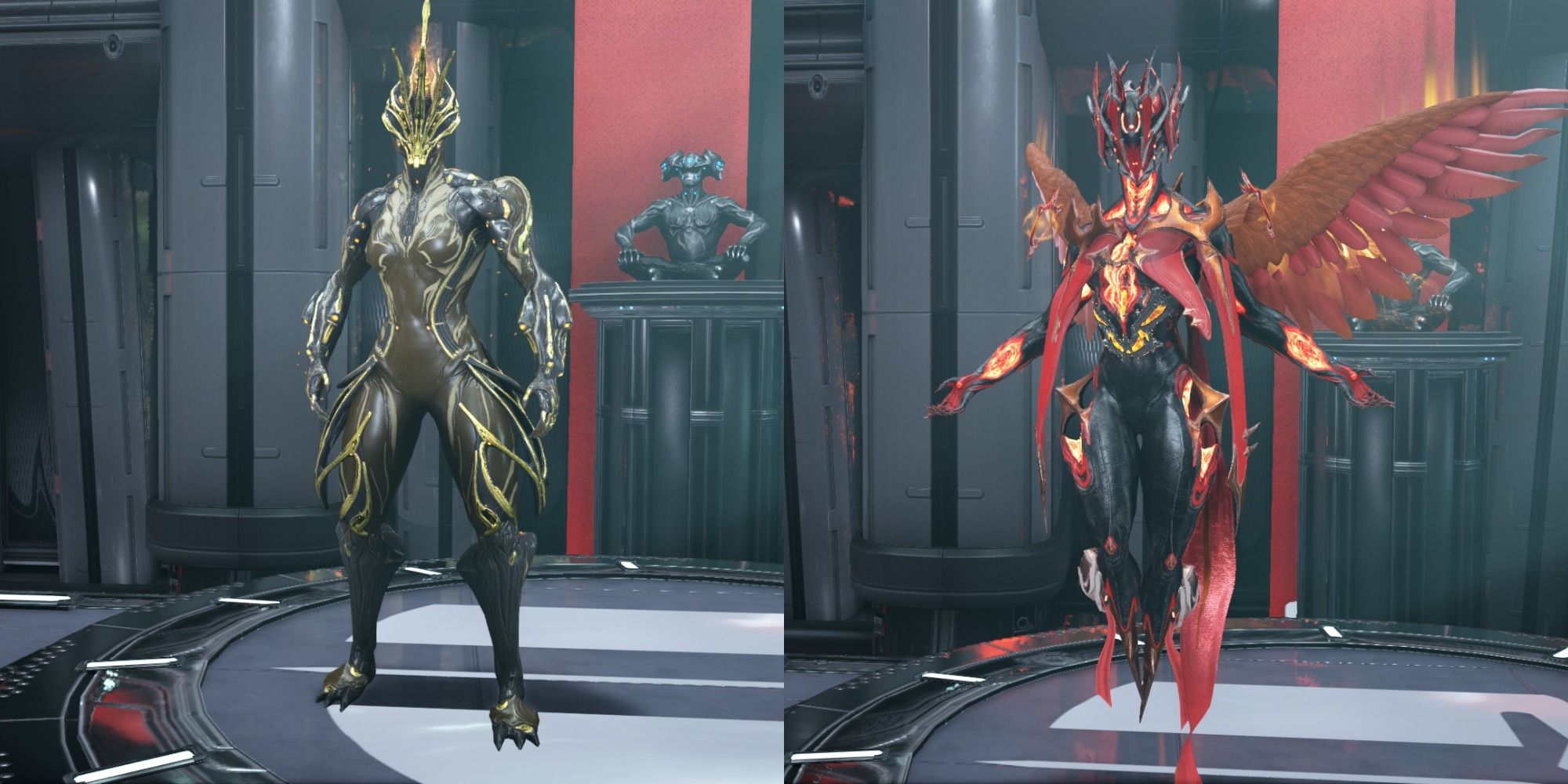 You’d think I was playing two different characters, but that’s Ember in both pictures. Virtually nothing is off the table when customizing your character in this game. If you’ve never played Warframe before, here’s everything the game lets you tweak:

As much as I liked my character, I couldn’t find a set of shoulder pads that worked. After searching through various menus, I eventually found the Arbiters of Hexis armor set I could obtain by farming some reputation with that Syndicate. With a new objective in mind, I set out to get myself a new set of armor.

It took a few days, but I finally managed to get the Hexis set and complete the look. Now look how badass my Warframe is. 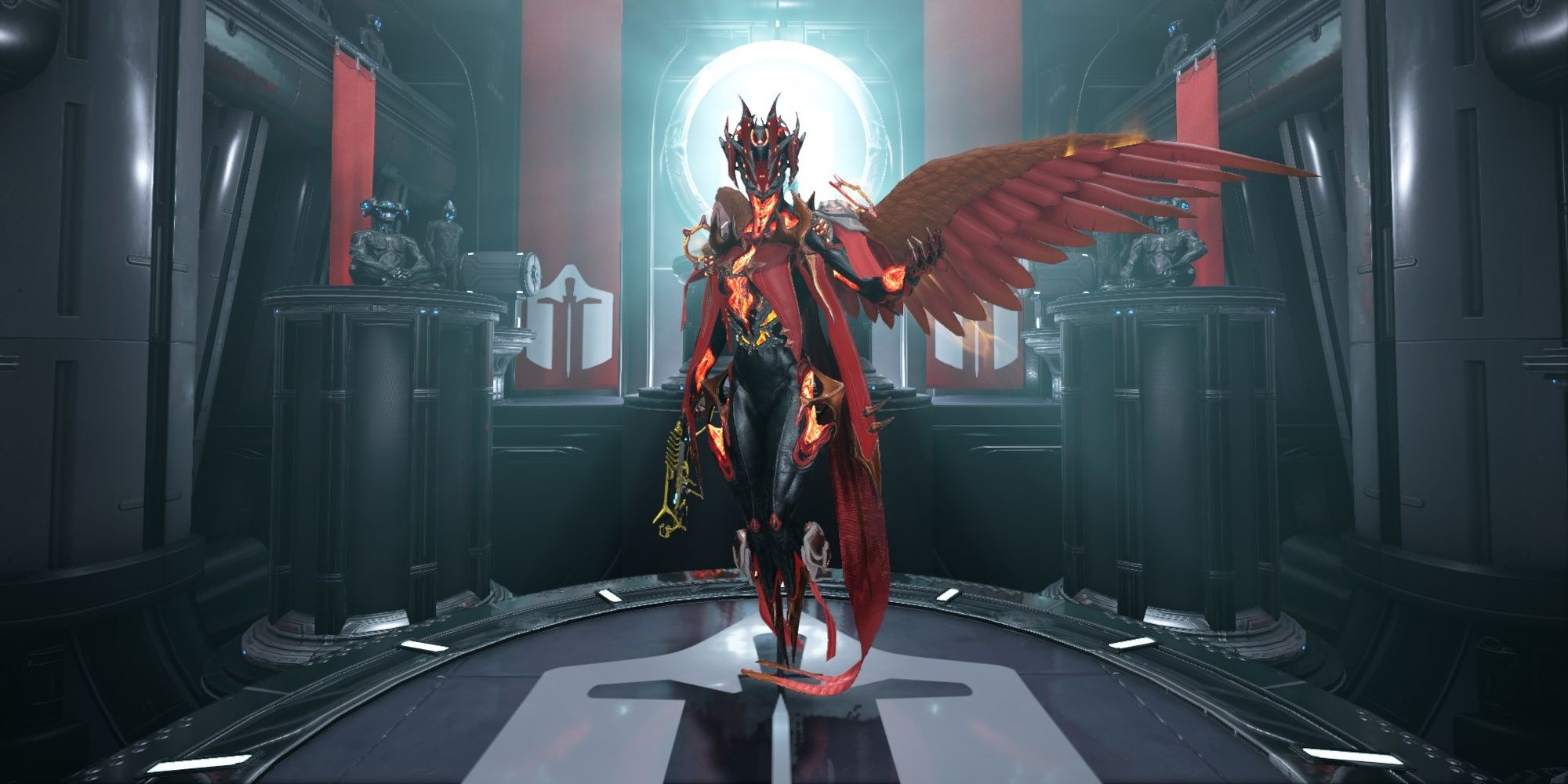 Most cosmetics in Warframe are obtained by spending Platinum rather than Syndicate reputation, so learning about Syndicate armor sets was a complete surprise to me. I spent the next few days earning some Weapon Arcanes I didn’t own, progressing my Helminth subsumes, and customizing all of my characters in preparation for The New War.

The New War eventually came. My wardrobe was ready. Saying I was over prepared for the quest would be an understatement. The Railjack and Necramech sections were a complete joke, but I didn’t care. My Warframe, Operator, Railjack, and Necramech looked fantastic. If I’m going to lose a war with the Sentients, I’m going to look fashionable while doing it. 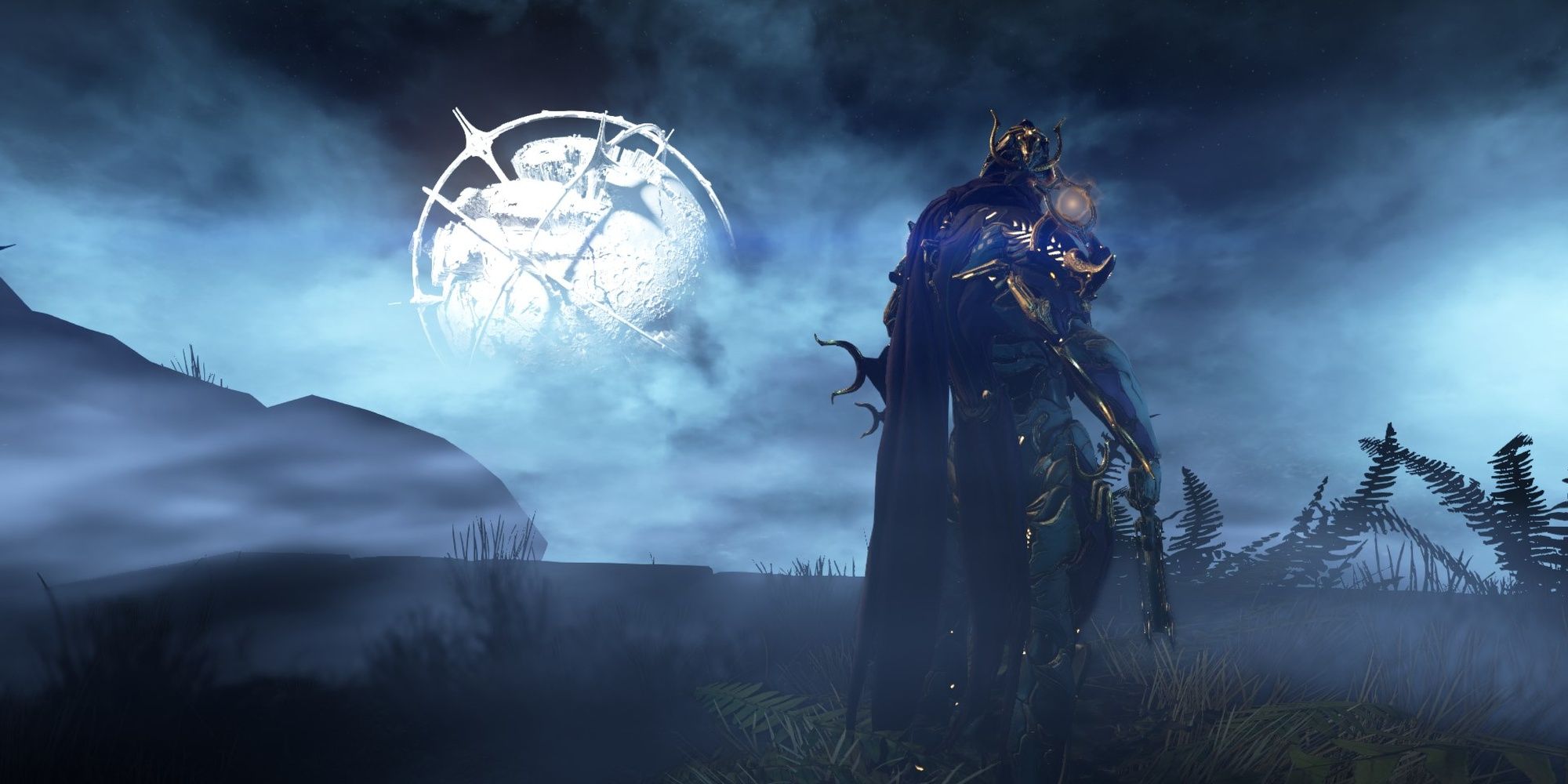 Unlike most cinematic quests, there wasn’t much to do once the quest was complete. I normally would have stopped playing and waited for the next mainline update, but something was different this time. Nightwave, Steel Path, and Arbitrations all gave me a method of continuing my customization addiction by earning Platinum or cosmetics outright. I finally had something I’ve been complaining about for years now: a proper chase.

Digital Extremes unintentionally created an endgame grind that caters to most Warframe players. Just about everything you obtain in this game can be sold to other players for Platinum, which you can then use to purchase just about anything you want. For me, that “thing” is cosmetics. If I’m going to spend thousands of hours playing a repetitive video game, my characters better have min-maxed builds and drip.

What’s even better is both the developers and community embrace this aspect. The New War released a new suite of cosmetics that evolve as you complete certain challenges. If you partake in certain long-term grinds, you can unlock new armor and Ephemera permutations. Warframe even has a game type called Captura intended solely for taking screenshots of your best-looking Warframes and guns. It’s what I’ve been using to capture most of the screenshots in this article. 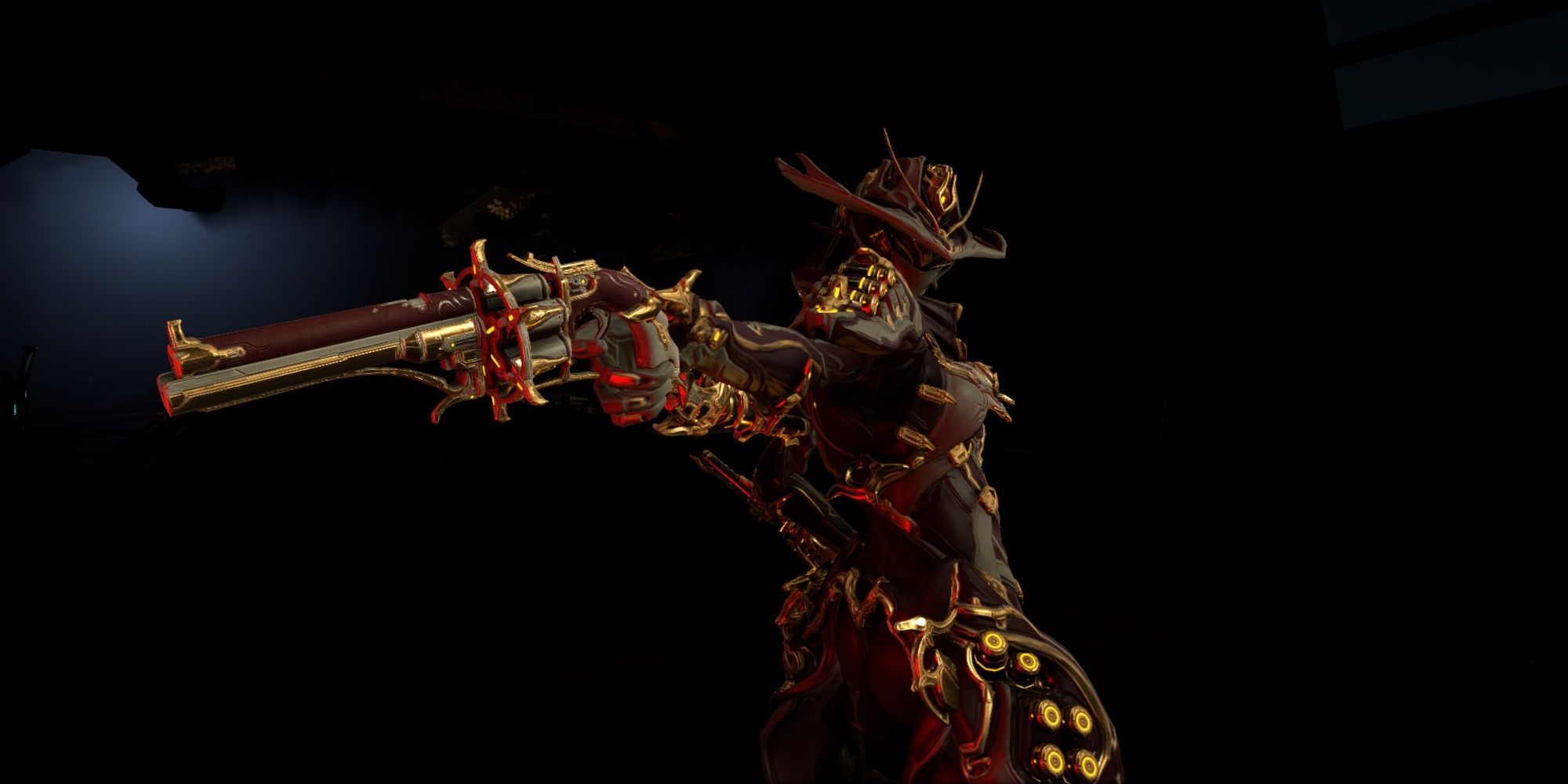 Community members have also embraced Warframe’s extensive customization options by hosting fashion contests. Even if you lose, it’s a fun way to meet new people and get inspired for future creations. These contests extend to Orbiters and even Clan Dojos. Someone went as far as to recreate Riven of a Thousand Voices from Destiny 2 in their Dojo. I can’t think of many video games where that’s possible, but it is in Warframe.

To some players, Warfarme’s lack of proper endgame systems is a real deal-breaker. That’s not to say that Warframe doesn’t have difficult content; it does. I just never got invested in time-limited Eidolon Hunts, Steel Path, and raids when they existed. For someone like me, trading with other players to purchase a dumb armor attachment or color palette is more than enough reason to play Warframe. Spending hours finding the perfect shade of red is just as fun as flying through the air at a million miles an hour or eliminating a group of Grineer clones with a single ability cast.

I don’t expect Warframe to ever get a proper endgame, yet I don’t think it’s the crippling flaw many veteran players present it to be. That single pair of wings got me to farm Syndicate missions, Steel Path, Arbitrations, and interact with Warframe’s fantastic community. For me, Fashionframe is the true endgame.