Gears 5’s campaign wants to be many things.

Some of it is designed for sipping, mulling, and savoring, like the hours I spent slowly and deliberately exploring large, open-world areas, discovering secrets and learning about the Gears of War universe along the way.

Other parts are as rumbly and explodey as an Avengers movie, like every time I shot my way yard by yard through small corridors, big rooms, and enormous factories, peeking out from cover to reduce monsters into meaty roast-sized pieces.

And sometimes it’s a bit of both, like when I discover a credible stealth sequence and botch it, and the cerebral calm transforms into a rumbling firefight.

These shifts in tone and pacing shouldn’t work, and yet they do. This is what makes Gears 5 so remarkable. The Coalition seems to have set out to redefine what a Gears campaign could be, and the final product shipped with a lot of varied ideas and set-pieces, many of which sound anathema to Gears of War when described in print.

And yet Gears 5 manages to cohere into something captivating, credible, and incredibly well-polished, especially on PC. 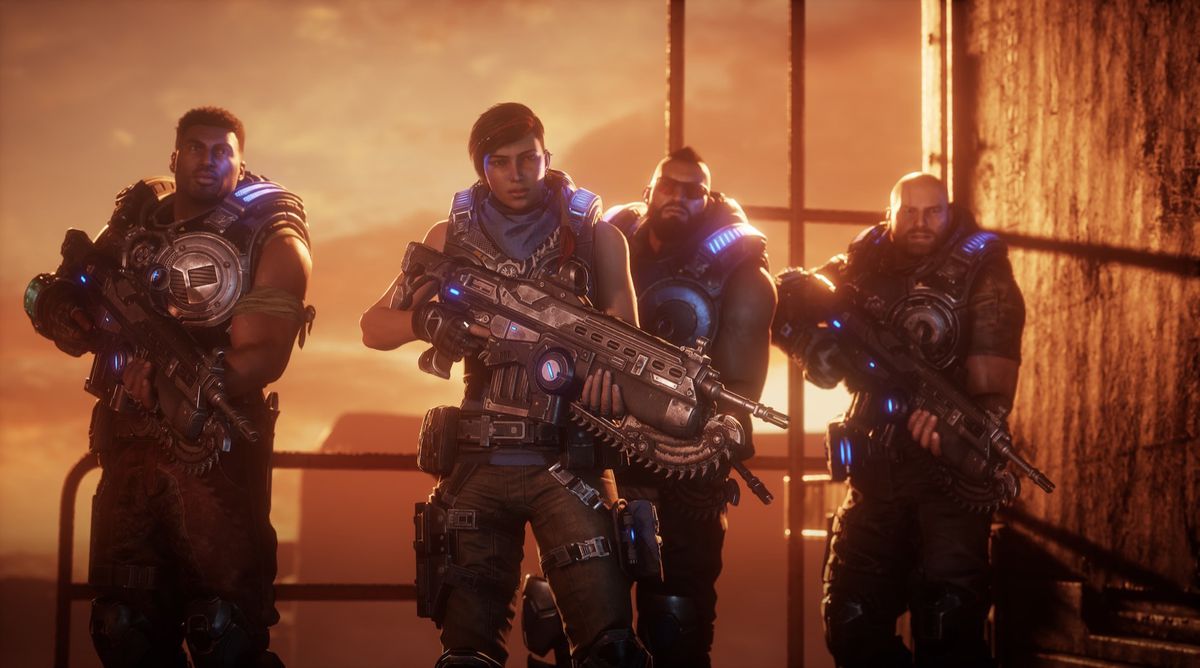 I was most of the way through the Gears 5 campaign when I wrote my initial impressions. I was — in hindsight, justifiably — enamored and wowed by the bold directions in which the campaign went. But I was onboard from the beginning, especially for the first few hours, which are exactly what you’d expect from a modern Gears of War game.

It’s Gears of War 4’s logical continuation, up to and including the character I control, JD Fenix. Kait Diaz, who returns from the previous game and takes center stage on the Gears 5 box art, has a co-starring role in Act I. She’s suffering from some devastating headaches, which have something to do with her late mother being plugged into the creepy, gooey orange bad-guy matrix in the last game. Mothers and children are a constant leitmotif, even when Kait’s another member of the squad. 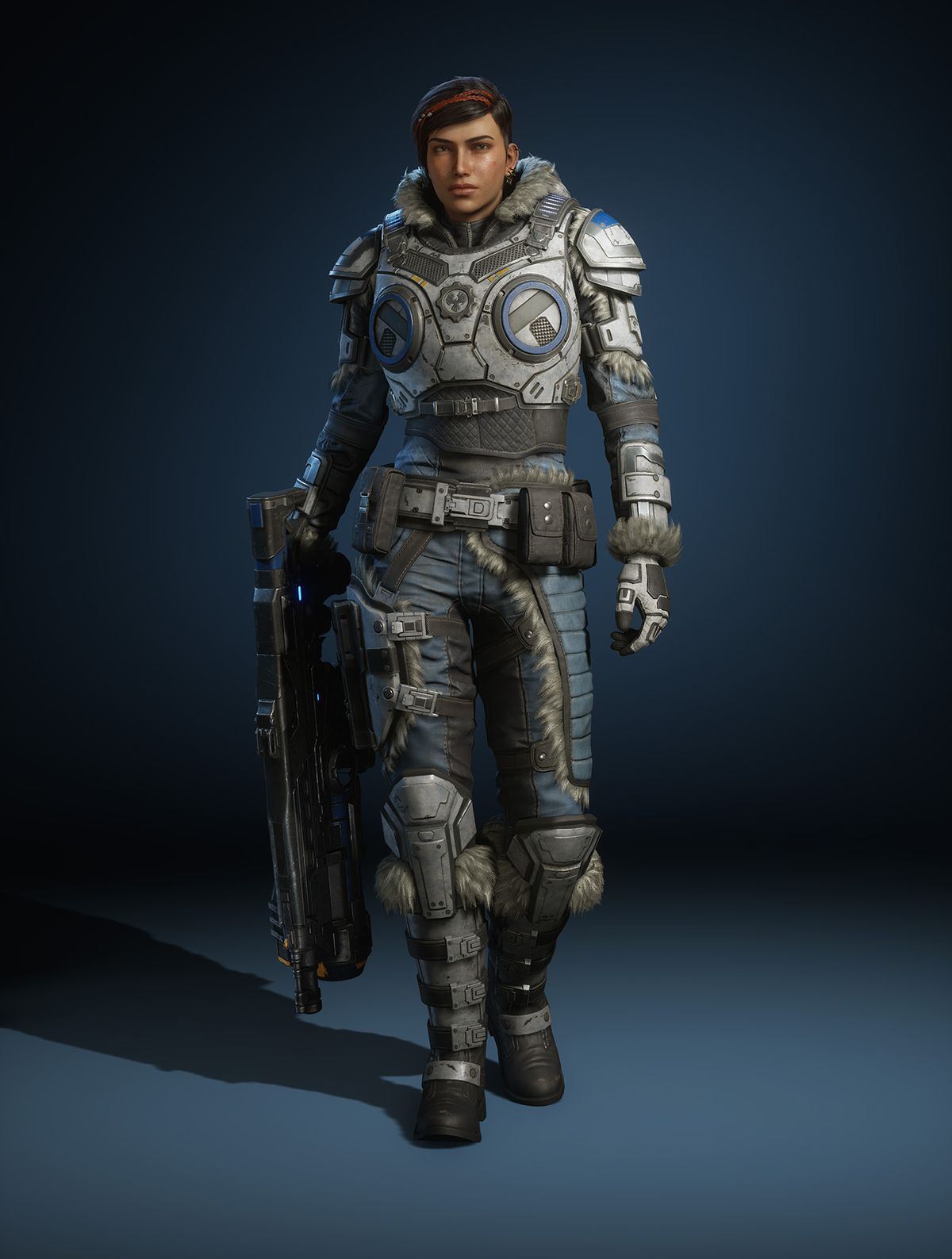 Act I balances exploration with the franchise’s long-established cover-based combat. I was happy to be back ducking bullets, gawking at the gorgeous environments, and reducing baddies to their meaty components. But the end of Act I changes everything, justifying the hard turn that the campaign takes in Act II and beyond.

Act II picks up months after Act I’s fiery ending. It also establishes the template for the best of Gears 5.

Gears 5 changes what it means to be Gears of War

I’m Kait now, on a diplomatic mission with my buddy Del Walker. It begins with a lot of walking, which, you know, seems as weird as diplomacy for a pair of COG soldiers in the chainsaw gun franchise. And yet, I never want to run directly to my destination. I want to explore, to learn, to try and figure out why people are screaming at me as if I’m the bad guy, calling me a fascist, and hoping for my death. I am not in a village in which I am welcome, but the Swarm are likely on their way. These people are about to become part of my fight whether they like it or not.

And sure enough, the explosions and gunfire begin soon after my arrival. But the battle that takes place ends with a series of mysteries about what’s going on and why I’m getting these headaches. Soon enough, I’m sent away from the central conflict to get everything sorted out before people die. Well, before more people die. 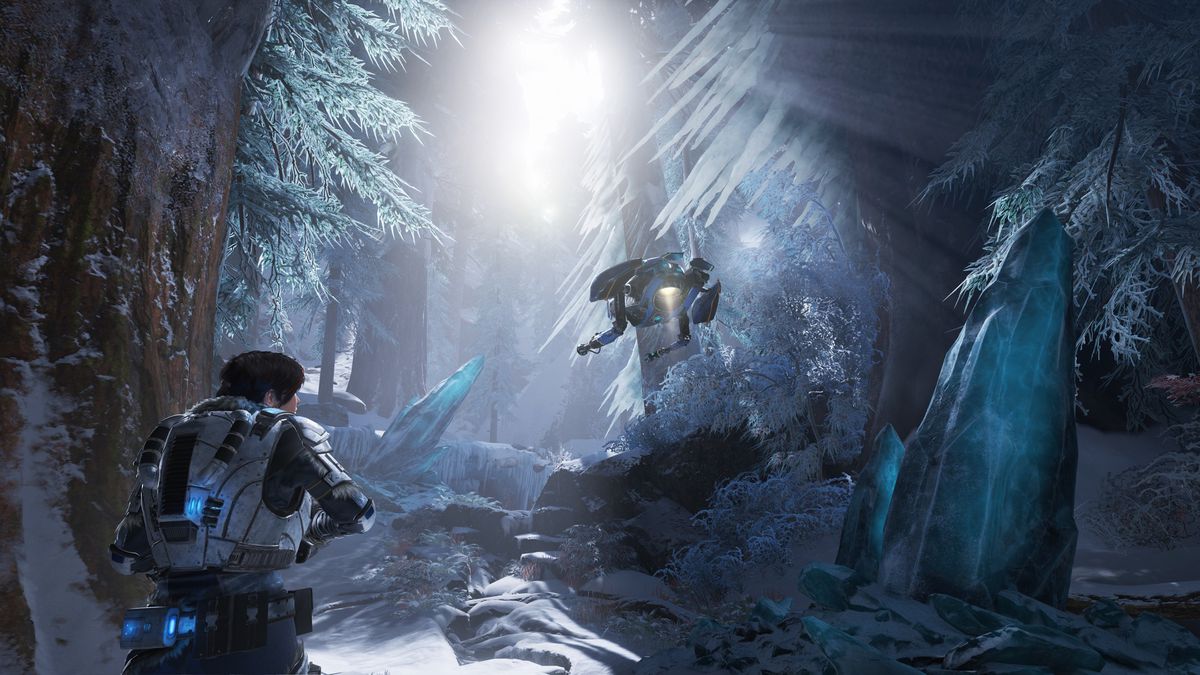 And thus begins the real heart of the game, where Kait, Del, and the robot Jack explore a frozen tundra on a skiff with a see-through sail and two slots to stow weapons. I have time to explore and see what’s out there, to take on side missions as well as move the story along. Gears 5 has, shockingly enough, competent open-world elements and a much more affecting story than the games that came before.

I find, to my everlasting surprise, that I enjoy the quieter moments more than the big action spectacles. That’s the nucleus of Gears 5 in my mind — the areas and hours where I set my own pace, riding the skiff to something shiny over the horizon. Each side mission teaches me a little bit more about my own place in the larger story. 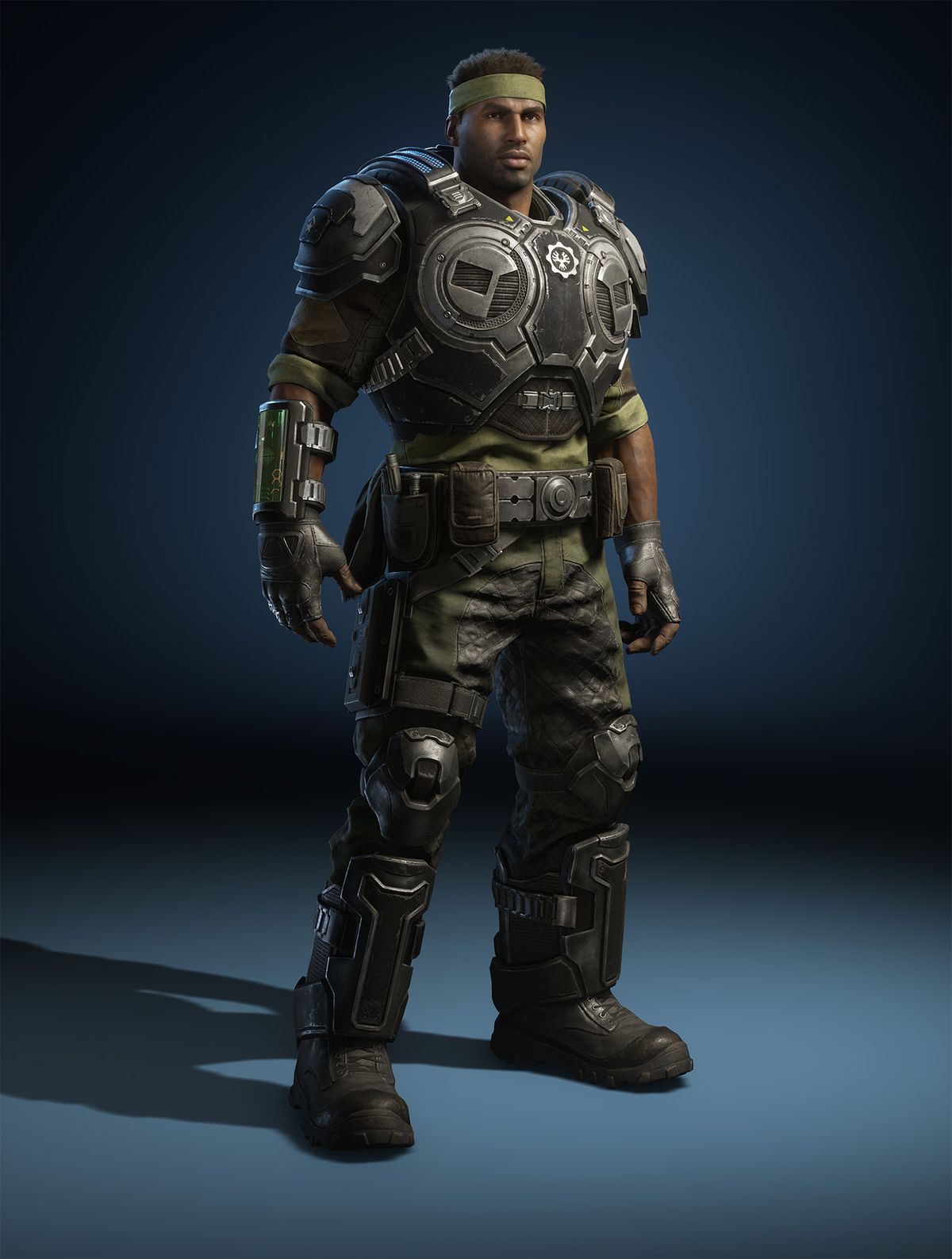 I love this rhythm — riding and talking, catching things in the distance, setting sail for question marks on my map. It’s a complete 180-degree turn away from what I expected from Gears of War, and I’m hooked. I will not leave until I’ve sucked the marrow out of this place.

The more I learn, the more I think I know about where this is going, and there’s nothing to do but half-dread getting there. The story and the hints about what has happened in the past, to friends and main characters alike, are horrifying. Experiments on children. Gangly monstrosities preserved like mosquitoes in amber, occupying dim and deserted facilities. Evil scientists who were forced out of their work, except that maybe the sickening science continued someplace else. Nothing is quite as it seems, and Kait’s head begins to seem more and more like a ticking time bomb.

This doesn’t mean that Gears 5 suddenly drops the combat. When I get to be a soldier doing what I do best, which is shoot things and solve problems, the game still knows exactly how to make me feel powerful and effective. I appreciate the change of pace and the spectacle of it all even more now that there is a contrast between the loneliness and the violence. Gears 5 is as good at doing what Gears used to do as it’s ever been — creating enormous, big-budget summer movie-like moments — but now, the most interesting things happen between those moments. I have time to take a breath, and learn. 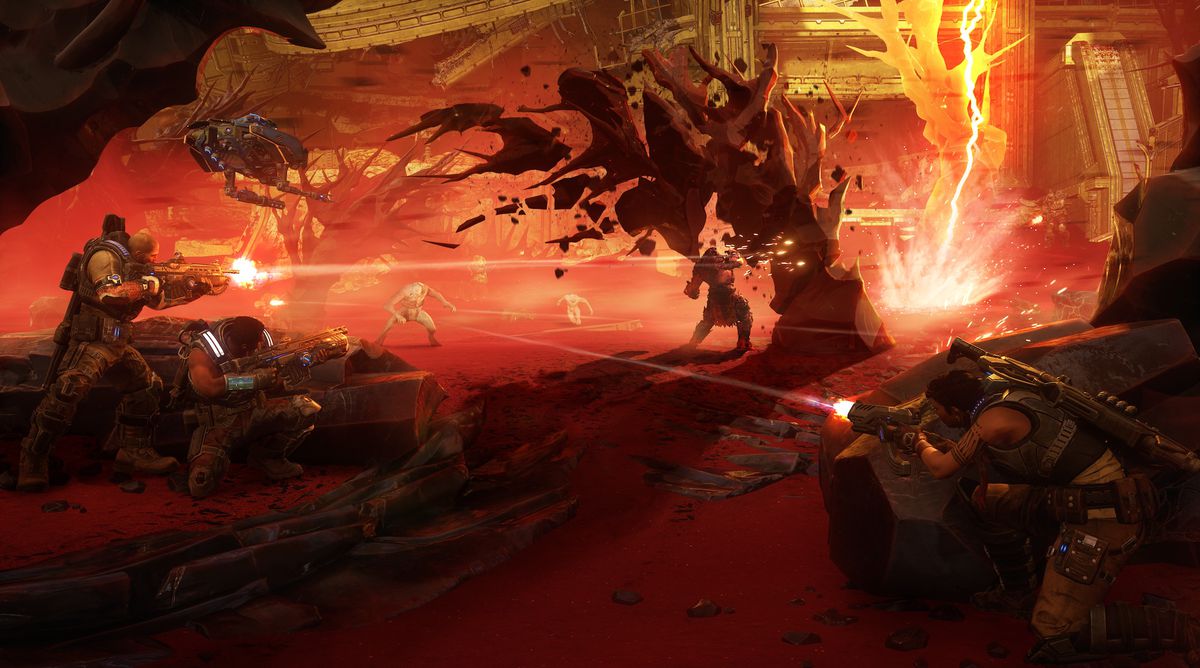 I feel like a small person doing the best I can in a gigantic, lived-in world where forces far outside of my control push and pull me in different directions. I’m not in control, and — if you’ll excuse the pun — I’m barely even a cog in the machine by the time the story moves into Act II. I’m just a person trying to make some sense out of a war that has been going on for much too long. And I get why the people I pass yell at Kait, even if I think they’re wrong. This world has been torn apart by fighting, and everyone is understandably weary of those whose job it is to pull the trigger.

Gears, as a franchise, suddenly feels balanced in a way that it hasn’t in the past. I looked around. I paused. I tried to take it all in.

And because I got to know the person I am, I was rewarded. My inquisitiveness made an impact, and often made me stronger in direct ways. My guns made a difference, when I chose to fire them. When I combined these approaches? I was unstoppable.

It’s borderline subversive sometimes, and I think I know where it’s pushing me, inevitably. I’m wrong. The worst moment of decision is far, far worse than I could’ve imagined. That’s Gears 5 for you right there: a game that somehow excels just as well when it’s quiet and introspective as it does when it’s as loud as a (Cole) train.

Gears 5 is now available on Windows PC and Xbox One. The game was reviewed on Xbox One using a final “retail” download code provided by Xbox Game Studios. You can find additional information about Polygon’s ethics policy here.