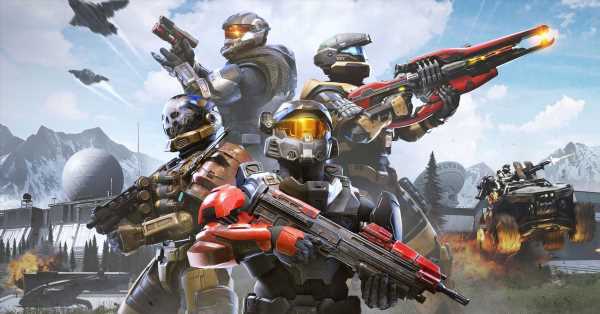 When Halo 3 was released in 2007, the franchise was the undisputed king of multiplayer gaming. But a lot has changed since then.

Call of Duty is a platform unto itself; MOBAs became a lifestyle; battle royale games have all but defined the last five years of multiplayer offerings. All the while, Halo’s subsequent sequels have tried and failed to re-seize the moment. However, with the recent surprise-release of Halo Infinite’s multiplayer, the series is clearly in a great place to reclaim the throne.

Halo Infinite’s multiplayer is, for the first time in the series, free-to-play, and was released simultaneously on Xbox platforms and PC, via both the Xbox App and Steam. It also came out nearly a month before the game’s campaign. These are important changes as the series moves forward — acknowledgements that the old system of console exclusives and big-budget sequels isn’t how multiplayer games prosper anymore.

While the release cadence may be a first for the franchise, the gameplay itself is altogether traditional, to great effect. Rather than the gimmicky additions of armor abilities or loadouts from recent Halo games, Halo Infinite gives everyone the same weapons and keeps equipment limited to a few — fairly ineffective — gadgets. Otherwise, this is almost exactly the Halo you remember from its prime nearly 15 years ago. Halo Infinite is slightly faster than Halo 3 (thanks to a new sprint mechanic that every player has by default) but it’s still far slower than something like Call of Duty. Fights still require you to break through an enemy’s Energy Shield before killing them, leading to frantic firefights that culminate in well-placed final shots. The one exception to this consistency is Halo’s iconic melee, which feels clumsy and unpredictable in this game, possibly due to some weird physics around player collision.

Infinite’s maps also feel like welcome throwbacks. The small maps effectively force players to either engage in quick and brutal shootouts in tight spaces, or risk running though each map’s sparse centers and being exposed to enemies on all sides. None of the maps are especially complicated, but their layouts are smart and efficient. Seemingly random corners frequently provided cover for me in the aftermath of harrowing fights This “economy of space” is reminiscent of Halo 3’s best maps, like Guardian or The Pit.

These smaller maps play host to Halo Infinite’s Quickplay and Ranked game playlists, which vary widely in quality. Quickplay matches were mostly frustrating: Teams were often imbalanced, players quit in every match, and the larger teams — with sometimes as many as six players per team — made the maps feel overcrowded and messy. One-on-one duels rarely exist in this mode, thanks to random grenades or stray bullets from a freshly spawned enemy.

Quickplay also includes the game’s full variety of weapons, which are mostly a disappointment. There are positive new additions like the Mangler or the Shock Rifle, but most of the new weapons feel either gimmicky or like worse versions of human guns — something every Halo game has struggled with. What’s more, in Quickplay you start with the assault rifle, which feels worse in Halo Infinite than it has ever been in the series thanks to the game’s lackluster melee — which used to provide the assault rifle with an excellent finishing move.

Ranked, on the other hand, is excellent. These matches are limited to teams of four, keeping the maps uncluttered. Players also start exclusively with the battle rifle, which feels fantastic in Infinite. These matches also tend to include players that are more locked in — I’ve rarely had anyone quit in a ranked match — which leads to more competitive games, and more varied use of the maps and mechanics the game has to offer.

There are a few problems that both of Halo Infinite’s smaller modes share, however. One of them is the game’s playlist options. Players can choose whether they want to play Ranked or Quickplay, but both will feature a mix of Slayer, Oddball, King of the Hill, and Capture the Flag, with no way to select or avoid certain modes. While many people love all of Halo’s modes, getting stuck on a team that’s intent on turning Capture the Flag into Slayer is a miserable experience for everyone.

Another of Infinite’s larger issues is respawning. Being returned to life in full view of an enemy player, or somewhere they’re going to step in the next two seconds, is a frequent problem across every matchmaking playlist. No matter how many times I killed someone who just spawned in, or assassinated a player because I spawned behind them, it never made up for the frustration of when it happened to me.

Halo Infinite also has Big Team Battle, the mode that’s played on Infinite’s larger maps, between two huge teams of 12 players. These matches are chaotic, ridiculous, and a lot of fun. In many ways, these are the quintessential Halo matches. There are Warthogs speeding across the map, Ghosts jumping over them, and Scorpion tanks hunting them both. Close-range duels where one player wins with a well-timed melee strike are likely to end with the winner getting blown up by a tank just seconds later. It’s exactly the kind of irreverence that makes Halo great, and turns multiplayer matches into hilarious water-cooler stories.

If there’s one glaring issue with the maps, both big and small, it’s simply that there aren’t that many of them at the moment. Halo Infinite currently has 10 total maps — seven smaller maps and three big ones. The fact that the maps don’t seem to cross over between playlists gives them a nice feeling of specialization — what works for 24 players would be miserable with eight — but it does feel like I’m repeating the same maps a little too frequently. Thankfully, the maps are well designed enough that this isn’t a big problem, especially with more likely on the way.

It’s important to note that developer 343 Industries is referring to this early release of Halo Infinite as a “beta” (even though it’s also Season 1, progression-wise), which means that many of these problems could be fixed by the time the game actually launches on Dec. 8.

But this is still one of Infinite’s most important and unanswerable questions: How will 343 keep the game fresh in the long run? On the bright side, 343 is already trying to fix Season 1’s slow progression. On the other hand, it’s still unclear what Halo Infinite’s roadmap will look like post-launch, and what it will mean for new maps, modes, and the like. The game also has a long way to go on the customization front. While the esports skins that are currently in its shop look excellent, the inability to customize the color of your armor beyond presets, or to mix and match individual armor pieces, is disappointing, and something 343 will have to improve for the game’s free-to-play strategy to work.

Whatever the answer to those questions might be, they’re issues for the future. In the present, Halo Infinite does an impressive job of recapturing the best parts of Halo multiplayer, while lightly updating them to feel modern for the first time in 15 years. Even though it’s still in beta, Halo Infinite already feels like it has most of the right pieces to build a great multiplayer game — 343 just hasn’t quite put them all together yet.