Ludvig Forssell and I found ourselves in the aisles of Home Depot, banging on random objects to hear how they sounded. Next on our agenda? Hitting a piano with a sledgehammer, to see how that sounded. It was all part of the job.

Would it surprise you to learn that we were working on Death Stranding as we removed items from the shelf, only to slam them together in search of interesting sounds? Because that’s exactly what we were doing: our jobs.

But how did we get here, and why?

Sony, which would be publishing the game on PlayStation 4, reached out to me about Death Stranding in 2017. We’ve had a great relationship since we first worked together on my score for The Unfinished Swan, and the company knows how important musical sound design and original sounds are to my process.

I see sound creation and composition as different parts of the same thing, and tend to do both at once, usually starting from a clean slate rather than working from a template. I approach composition as a listener first, which makes me comfortable with curveballs. I’d never written baroque-style pieces before The Unfinished Swan, or military marches before The Tomorrow Children.

My first step would always be to just listen to that style of music, soaking it in, making sure I understood what made it special and how it could be used to express the themes and tone of each game. And I knew Death Stranding would be another new creative challenge, which it was — starting with the fact that I wouldn’t be composing the score.

Starting a project knowing that you won’t be executing the role in your job title turns out to be a great way to discover everything else you have to offer as a creator.

Sony suggested I talk to Ludvig Forssell, audio director at Kojima Productions and composer of Death Stranding, who was already hard at work on the score, to ask how I might be able to help.

He had lots of ideas about the kinds of aggressive, sound-design-driven timbres and textures he thought would make the score unique. He wanted the music to be disorienting, aggressive, and unrelenting. He wanted a big, modern, epic, cinematic sound — but without the instrumentation that we typically associate with that kind of score. I could tell that this was going to be a production that was as much about its palette as its compositions.

So that was my first role: to listen, consult, and offer support — roles that are at the heart of what a composer does before composing anything. We shared music, and talked shop. We came away from those discussions with a better idea of what the score should and shouldn’t be. We wanted intensity, and wanted that intensity to come from an approach rooted in rhythm and texture more than melody and chords. The palette of sounds we wanted to pull from needed to be far from traditional sounds. 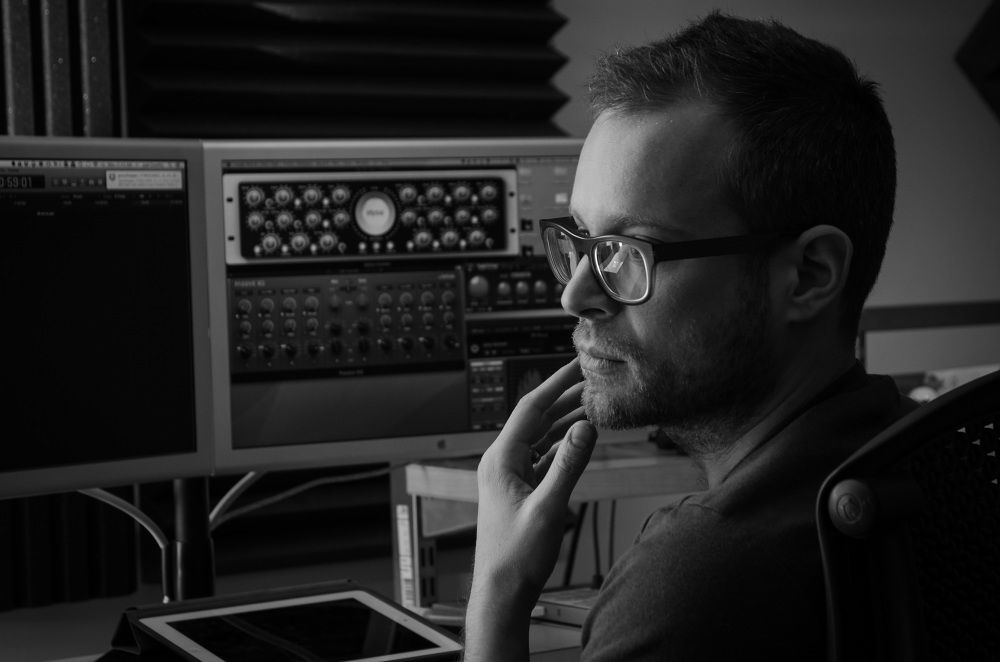 But how could we achieve all that? Ludvig wanted fresh sounds that sounded “like Death Stranding,” but we didn’t quite know what that meant yet. We needed a way to refine our design rules: a common language essential to any collaboration in a medium so subjective.

I could have created sample libraries and synth patches and handed them off. But Sony’s music supervisor had a different idea about how we could cover much more ground.

Creating sounds unattached to a piece of music would have been like sound designing in a vacuum. So instead, Sony suggested that I create 10 one-minute pieces, all built from original material. I banged on found objects, things like boxes and plastic bins, searching for anything that felt heavy, and then I sampled it.

With a combination of soft synths, analog modular synths, and vintage analog synths, I made wild, aggressive and churning synth sounds that felt alive, and then I used them in my own compositions. That way, we could talk about music versus simply talking about sounds. And those conversations helped us figure out what Death Stranding sounded like.

Once we got those pieces in a good place, Sony’s music department edited them down and created sample-based instrument banks for each one. I wrote 10 minutes that I knew would end up on the cutting room floor no matter how good they were.

But this process meant that every instrument we ended up with was already expressed in the design language that we knew could work for this experience. We found the sounds, made sure they worked in a sample piece, and left the process with new sounds, samples, and virtual instruments that would help create the aural landscapes of Death Stranding. It was a strange process for a strange game.

This first phase took about three months, and went well enough that Sony thought it would be worthwhile to host all of us in its studio for three days in December 2017. We would be focused on developing a custom sample library to use exclusively for Death Stranding. Someone suggested we take a group trip to Home Depot to find things to record, which we all thought was a great idea. Who doesn’t like having money to spend on weird stuff they’ll soon get to bang together or subvert in interesting ways to try to find the best possible noises?

Shopping at Home Depot, guided by our ears, was a highlight of the project. Ludvig and I went, along with Sony’s engineers, music supervisors, and music editors. We were a big crew, and we had a blast. We held metal vents up to our ears and tapped them to hear what they sounded like up close, with the vents closed, and again with the vents open.

We bought objects with unknown functions, as long as they sounded interesting when we turned them on or hit them with a hammer. We bought things to get hit and things to hit them with. We ended up with a cart full of the most random junk; I don’t know what they thought we were working on.

The team had also asked me what I wanted at the session. Based on the music I’d already written and the samples we’d generated, I knew exactly what: a metal oil drum, a plastic oil drum, and a piano that — and I wanted to make this clear from the jump — might not survive our recording sessions. It was all at the studio, mic’d up and ready, by the time we arrived.

We took it further. A piano played with its keys can be a beautifully subtle, melodic instrument. But a piano played with a heavy rubber mallet striking the bass strings directly or with a gardening rake scraping across the strings, or even with a sledgehammer banged on the side, turns the original piano into one of the most brutal, cacophonous percussion instruments you’ve ever heard. So that’s what we did.

The session was organized around recording different sound sources. We sampled the oil drums and the stuff from Home Depot — paint rollers, ceramic tiles, bags of bolts, wooden planks, metal ductwork, chains, and a lot more. But we spent the most time on the piano. Whatever we were sampling, we’d strike it and wait for the sound to die off completely before we made the next sound. Then, when we felt like we’d made every sound we could, we’d move on. Sony’s engineers made careful notes so all the samples could later be edited into sample-based instruments. We ended up with a sound library that was almost 20 GB.

It was a unique opportunity to compartmentalize that part of my creative process and export it to a different score. And it helped me realize how much value the process of “finding sounds” has, even independent of composition. My official credit for this component is “musical sound design,” but there’s another term that I like better: score designer.

Keep an eye out: I’m going to be using that title for future projects.

Here, I should digress and clarify our roles. Ludvig is the lead composer, and every final decision on anything I contributed to the score was up to him. He did a monumental amount of work on this game — far more than me.

I was hired to help with sounds, and then to support his score with additional music. By no means is the music he composed constructed exclusively from material from those sounds or our sampling session. He has brought so much of his own creative angle and perspective to this game, and it’s far better for it. I think that sometimes, with a project of this magnitude, it helps to have another creative mind in the room, especially at the beginning when you’re exploring and figuring out what works. I was happy to be that other creative mind when he needed me.

Almost a year went by after those initial sessions.

Then I was asked to write 40 minutes of additional music for the score. I created a second set of battle system music to complement Ludvig’s original battle system score. My two tracks on the official OST are each edits of four tracks that scale in intensity depending on what’s going on in the game.

There’s an action layer that represents the highest level of intensity in each battle system. It needed to be unrelenting, disorienting, and brutally aggressive. It was challenging, and unlike anything I’ve ever written. That’s why I love this job. And I was glad to be composing, after all. The best part was being able to use the library I’d helped create. The sounds we’d recorded a year prior are all over my tracks, and the value of these original sounds was never more clear to me than when I used them myself to write original music.

So that’s my other credit on Death Stranding: additional music composer. I’m very proud to have contributed compositionally to this game and this score.

Being a composer isn’t about writing music. At least, it isn’t just about writing music. My actual job — everything that happens in the space and time around the music that eventually reaches people’s ears — is as integral to the job as the act of composition itself. And in the last few years, I’ve grown to understand and embrace everything I do in that space.

You’ll have to listen to the OST and decide for yourself. I don’t think you’ve heard anything quite like it.