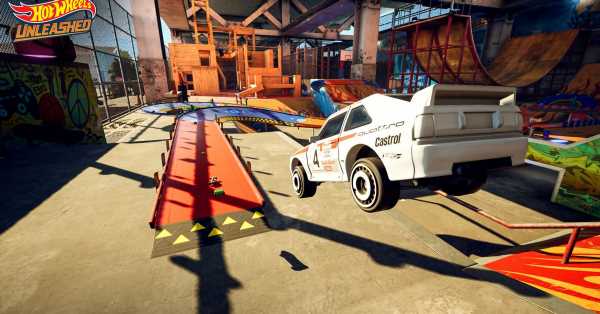 A thumbprint stamped across the hazy driver’s side window of my 1985 Audi Sport Quattro, at the end of a race, says it all. In the impressively detailed and altogether delightful Hot Wheels Unleashed, launching Thursday, the cars feel like toys that actually have been played with, and like I’m the one doing the playing.

Previous Hot Wheels games (Unleashed is the 27th, by my count) have generally presented player and car at equivalent scale, through shrinking the viewer’s perspective into their world or making one of them life-size to ours. Hot Wheels Unleashed scrupulously maintains its 60-vehicle fleet at their authentic size, zipping through the full-size world we live in, subject (mostly) to its laws of physics. The result is a great, legitimately challenging racing video game that brings the charm of Hot Wheels to life.

When the camera zooms into the interior of the Custom Volkswagen, it reveals the matte gray plastic of the actual Hot Wheels car, one seat in the center of the floor, the wheel a solid disc stuck to a featureless steering column. And when this car zips off the red plastic track, or plows into a table leg, there’s a living-room verisimilitude to the speed, collision, and rebound of their crack-ups.

This is important, not just for the aesthetic that Milanese studio Milestone achieves, but also because it gives the cars very intuitive handling. It’s hard to describe; I drive arcade or action racers with life-size vehicle models all the time, but I don’t feel as connected to their motion as I do in Hot Wheels Unleashed. That’s critical, as the AI racers in Hot Wheels Unleashed pose an unexpectedly stout challenge in the upper two (of four) difficulty levels.

Hot Wheels Unleashed has 60 cars for you to collect and race in the game’s staple offerings of online multiplayer, local split-screen multiplayer, or you-against-the-AI races. These cars are graded by rarity, and vehicles can be traded for virtual cash or parts, which can be used to upgrade them. There’s also a campaign mode, called City Rumble, where players unlock new vehicles or win the Blind Boxes that randomly award a different ride. In City Rumble, the races all have a mixture of grades, with celebrity cameos and collector’s items like the TMNT Party Van or the Back to the Future DeLorean.

The races in all of these modes involve just two special abilities: drifting, and a turbo boost whose strength is balanced by the rest of the car’s attributes. No weapons or perks are at play here. For an arcade racer, it’s a refreshing focus on skill and vehicle physics, and Milestone can make this design choice because of its experience and reputation building core motorsports simulations over the past two decades.

On the track, you win by being faster, not what you do to your car or someone else’s. Contact is inevitable, but the speed and the changes in direction are so quick that tactical collisions aren’t typically a core part of gameplay. Your winning play is always to keep your car on the track, off the side railings, counter-steering into drifts for astounding distances (measured in inches, heh heh) and laying on the turbo boost at the apex of the turn.

Each vehicle has a different turbo boost, related to the design of the car. The Bump Around, which is a bumper car, has a lengthy turbo that is difficult to drain, whereas the Sharkruiser, which is faster and more dangerous, has three single-use boosts. Boosts all recharge slowly as you drive, but drifts charge them faster.

Executing a drift is very simple; learning how to sustain one for longer requires practice. Like most arcade racers, speed is nothing without course knowledge. Such intuitive physics and outcomes within Hot Wheels Unleashed speak to Milestone’s bonafides as a racing developer. The movement in Hot Wheels Unleashed is true, rendered in Unreal Engine 4. Nothing feels locked to a surface, or to a region of the screen, as in other arcade racers. A wobbly jump landing can send you tumbling, but it doesn’t feel unfair. Even if I blew a sweeping right-hand turn across bare floor and completely missed the re-entry to the track, I never felt totally out of a race. Even crashing out of the track, while on Medium difficulty, I was able to return and turbo boost back in the action. Maybe a win was out of reach, but top three always seemed reasonable.

As for the AI, they’re legitimately tough competitors, themselves boosting throughout a modestly rubber-banded pursuit to the finish line. As a rule of thumb, any Common car can win against any other AI Common in a straight fight. And at lower levels, Hot Wheels Unleashed left enough room for me to counter with boosting and turbo charges of my own, building huge leads with the feeling I’d dusted an AI for good. At Hard and Extreme difficulty, I had to get to the front of the pack at the start and make zero mistakes, to win or contend.

Hot Wheels Unleashed also packs in a customization toolkit and a track editor, with some unlockable elements and decorations awarded in City Rumble, too. While I didn’t spend much time in the track editor, the robust livery editor did get a lot of my attention; it’s rather quietly the best asset in the whole game. The livery options really showcase the realism in the different vehicle finishes and materials — from enamel, to flake and glitter paint jobs, polished faux-chrome and matte gray die-cast metal. I was easily able to match the color pattern I use in F1 2021, for example, and pretend my racing team there had an officially licensed collectible in Hot Wheels Unleashed, thanks to the library of decals the editor includes. Collecting virtual Hot Wheels is fun; making (or repainting) them is a joy.

All of this adds up to a very strong, broadly appealing racer. Hot Wheels Unleashed is up there with Milestone’s MotoGP and Monster Energy Supercross, as well as the F1 and WRC games, as another winner in the ongoing renaissance of licensed motorsports gaming. For those who are perhaps not dedicated motorsports or sim racing fans, it could be a strong contender for their racing game of the year. I’ve become a virtual gearhead over the past four years, and Hot Wheels Unleashed is at least in the discussion for mine.

Hot Wheels Unleashed was released on Sept. 30, 2021 on Nintendo Switch, Windows PC, PlayStation 4, PlayStation 5, Xbox One and Xbox Series X. The game was reviewed on Xbox Series X using a pre-release download code provided by Koch Media. Vox Media has affiliate partnerships. These do not influence editorial content, though Vox Media may earn commissions for products purchased via affiliate links. You can find additional information about Polygon’s ethics policy here.