Cyberpunk 2077 is the kind of game with something to find around every corner, especially if you take the time to go through the back streets. When you have a vehicle – which you can summon to your location like The Witcher 3’s Roach – there’s not much pushing you to walk to your next destination, but this is absolutely the kind of game where the journey can be just as valuable as where you end up. In The Witcher 3, I grew fond of riding on horseback through the fields surrounding Novigrad instead of just fast travelling to and fro, watching a load screen count down each time I did so. But while that’s a great way of seeing everything the mostly wide and empty fields of The Witcher 3 have to offer, you need a much slower method of transport to make the most of the intricate and dense city streets of Cyberpunk 2077.

So, just to see what would happen, I decided to take my time and walk 3km through Night City, from the Docks on the North side of the city to the Corpo Plaza in the city’s beating heart. I would usually drive this whole journey – or just cut out the journey entirely with the fast-travel points that are dotted around the city – but I needed to find out what would happen if I took things slow for a change.

As I start out, I almost immediately get a call from Regina, my contact at the NCPD. Yes, I know, cops, but I need friends in high places if I’m going to be doing some inevitably illegal things. Regina sends me the details for a new job, and I tell her that I might get around to it, eventually. I think she’s still mad that I accidentally destroyed a vehicle she wanted me to recover.

As I’m wandering through the streets near the docks, I end up passing through an area underneath a motorway, scaffolding and platforms covering the walls. The site of a crime, according to my NCPD tracker, and it’s up to me to clean it up. Luckily my Fusion Rifle is pretty powerful and takes down these criminals with a single headshot in most circumstances. I’m not actually sure what crime they’re committing, mind, but we’ll save that for later. 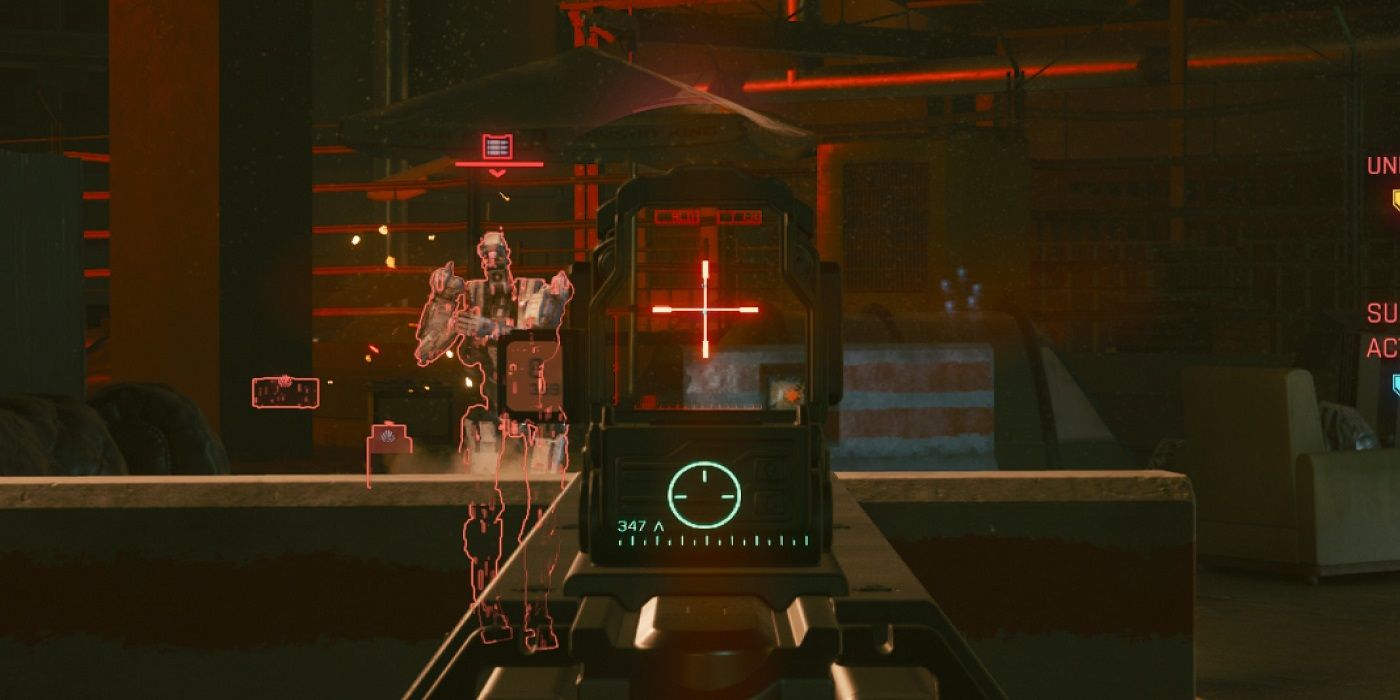 After I make my way through the tunnel, taking down snipers that were waiting along the walls, Regina calls again about yet another job. She’s had a report that there’s screaming in one of the downtown areas, and claims it could be “another screamo band,” which is incredible. I can’t believe screamo still exists in 2077. What a shame.

I continue to follow the waypoint I set for the job that was 3.2km away, now only just over two. I nearly walk onto a motorway with cars whizzing past my face, but then realise there is an actual street and path just underneath. I jump down and land with a thud, blood splatting against the pavement, and a firm dent in my health bar. Just as I land I hear gunshots fire rapidly behind me – probably a gang war that doesn’t involve me, but I’m better safe than sorry, so I start running in the opposite direction.

Unfortunately there is no public footpath between Little China and Corpo Plaza – these parts of the city are separated by bridges, and you’ll need to find transport in order to go across them. Well, you don’t have to, I could walk, admittedly, but that feels a bit too risky. I call for my vehicle, and then hop out as soon as I get across the bridge. 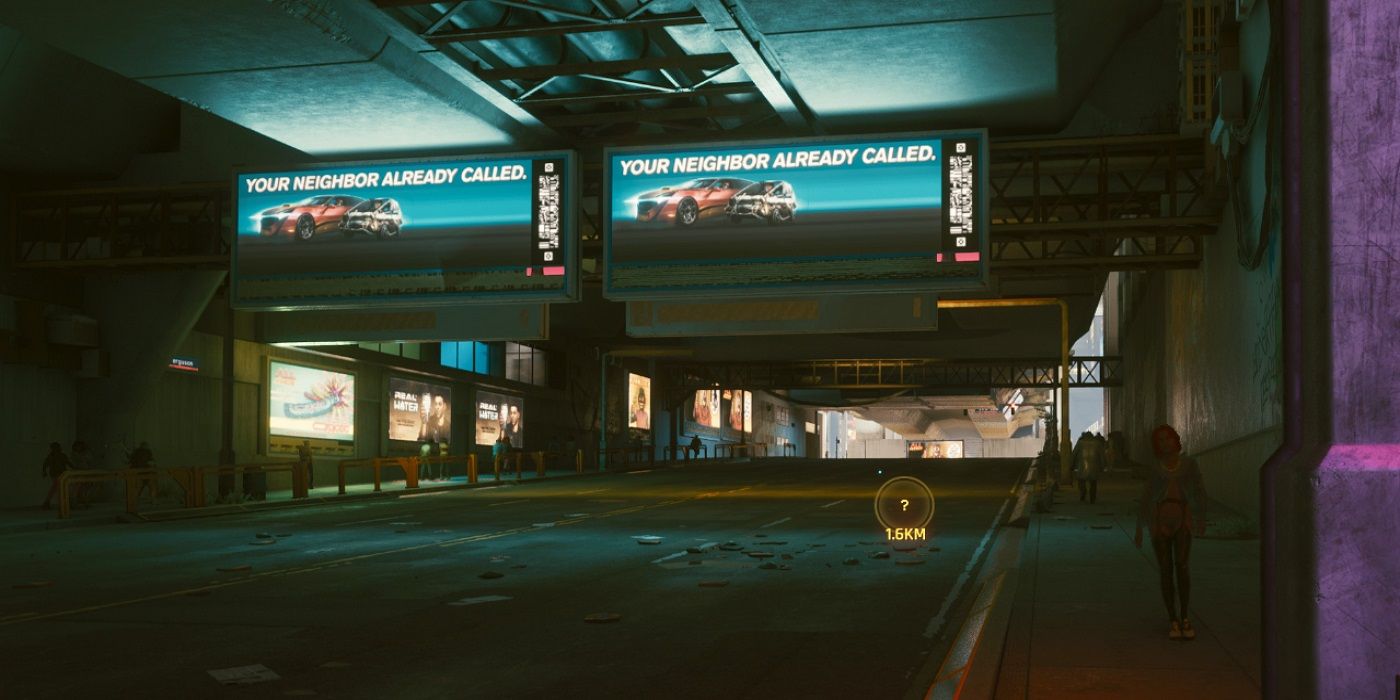 As I make my way through the next load of city streets towards Corpo Plaza, I can’t help but notice the streets are more filled out and vibrant. The Docks – where I started my journey – are a fairly run-down part of the city, while Corpo Plaza is more of a central hub, buzzing with NPCs filling the crowd and crimes happening on every corner. I try to interrupt a nearby mugging, since I’m such a nice person, and notice the muggers have Skulls above them, indicating their high-level and the fact I am no match for them. I give it a try anyway, confident as I am in my Fusion Rifle, and after taking down half the health of one enemy, a single shot kills me instantly. Upon reload, I let them continue their mugging uninterrupted.

This area is clearly too much for me in terms of enemy power, so I decide to beeline it for my destination, and run underneath a bridge to find a shortcut. Instead, all I find is yet another active crime, and a whole bunch of gang members – Skull level. Once again, I leave peacefully, and quickly. 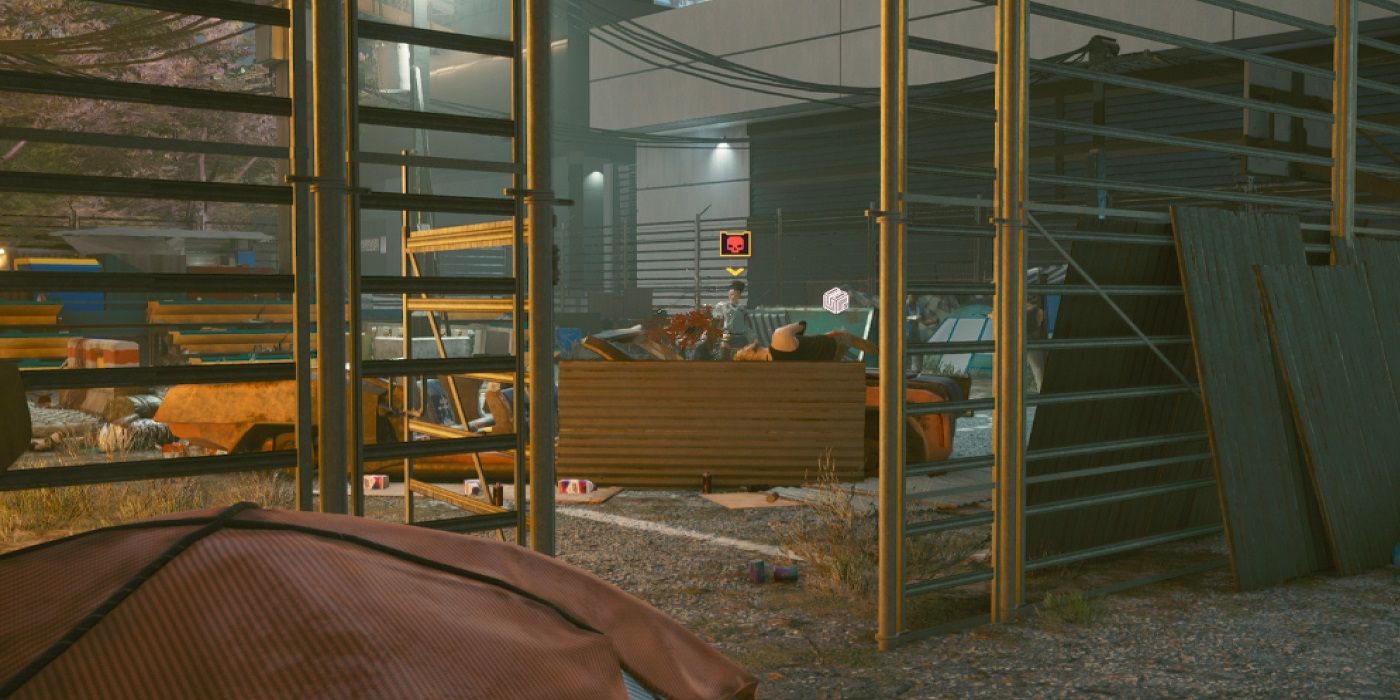 This is the home stretch, I’m less than 500m from my destination, and I’m just taking in the sights. Food vendors tempt me over with their neon signs, but like most market stalls in The Witcher 3, these aren’t all interactable. Still, all these little details give the world a sense of grounded reality. Walking further down the streets I see a child, and while it’s not terribly rare, you don’t see many little lads wandering around Night City. I try to talk to it and and it swears at me. I hate children.

For the most part, fashion in Night City is pretty conventional, a hybrid of modern-day trends and cybergoths that dance under a bridge, but this holographic hoodie stands out to me. Not only do I want one in real life, but this is one of the few pieces of clothing I’ve seen in the game that feels truly alien and futuristic. 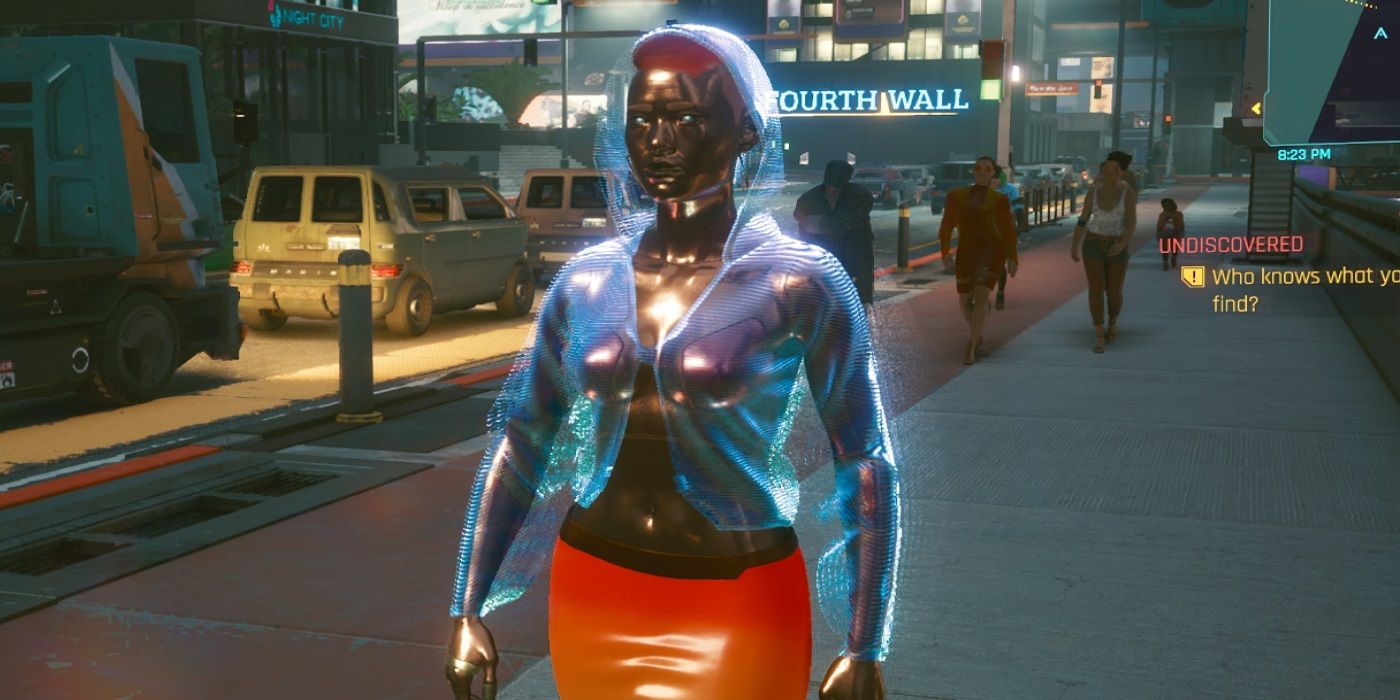 As I make my way closer to the mission destination I made as my initial goal, Padre – a questionable underground figure – calls me. The mission I marked on the map was his, and he wants me to acquire some volatile materials from a certain individual. Outside of his building I see a homeless man playing guitar, with a sign asking for spare change or ammo. Essentials have changed in 2077. Upon entering the building, NPCs warn me of the temperament of the gentleman that lives here. 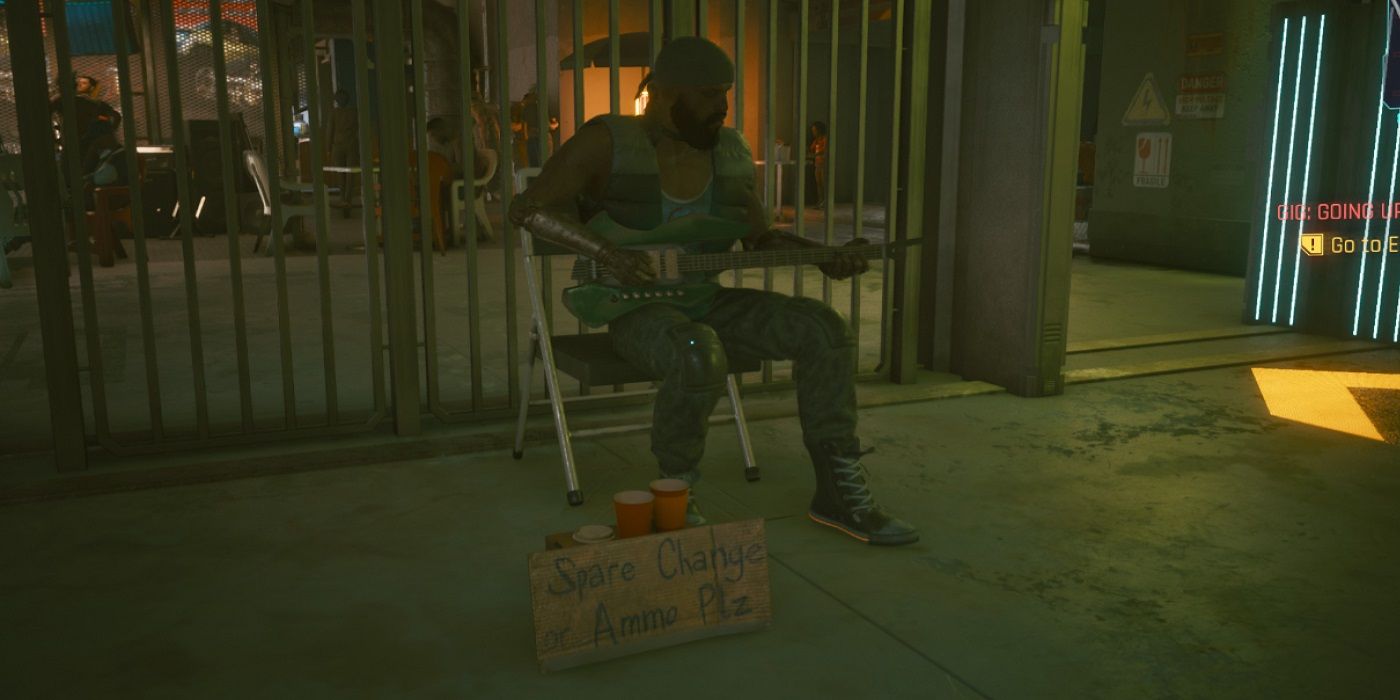 I cautiously walk down and see a man swearing about CCTV cameras in a paranoid daze. Skull-level. Well, I might as well take my chances once more. Luckily a single enemy isn’t too much to deal with, and I use all of my most powerful weapons, in addition to a fair few grenades, to take him down. Dazing an enemy with a grenade and then pumping them full of headshots is a fairly strong tactic, needless to say. 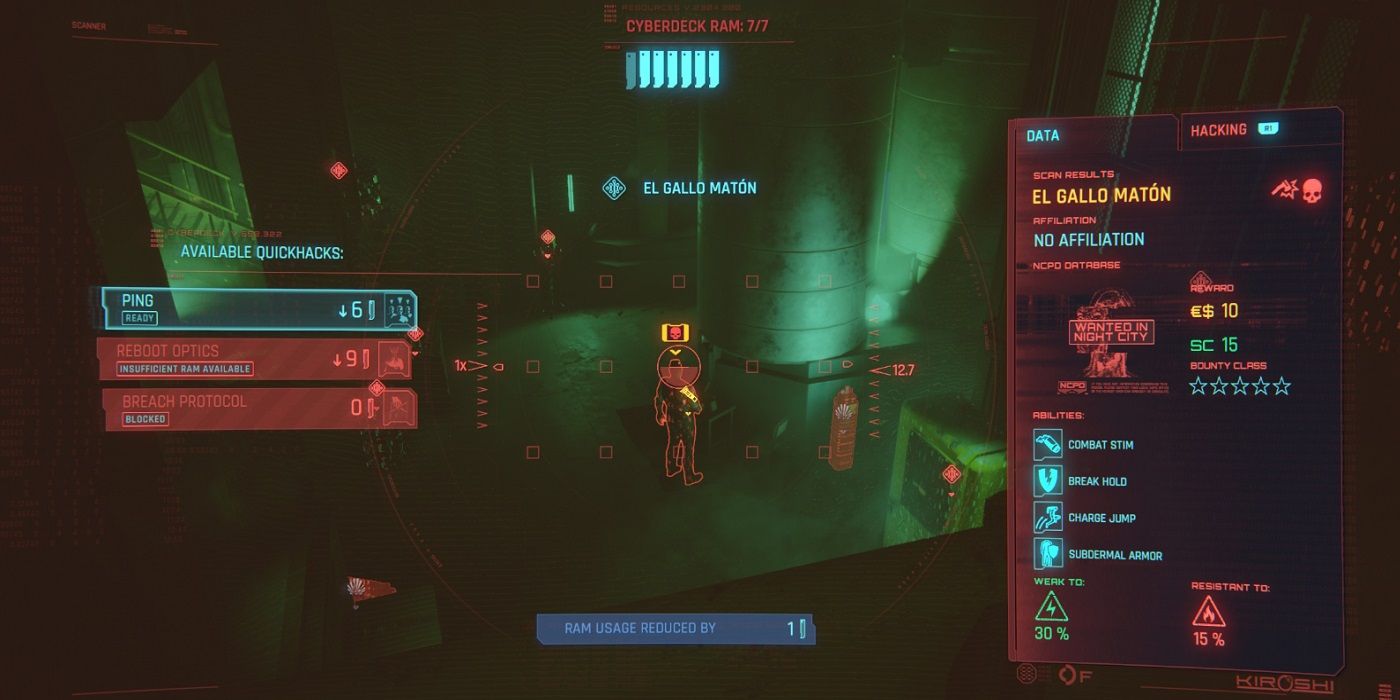 Once he’s down, I collect the volatile rods for Padre and store them away in a safe deposit box. But that’s just one of the dozens upon dozens of missions Night City has to offer you, and just one walk through a select few streets. I passed by so many more missions, so many more shops and NPCs, that the combination of experiences you can have in Cyberpunk 2077 feels limitless. I can’t wait to see where my next Night City stroll takes me.

NEXT: When It Comes To Representation, Trans People Don’t Need Your Excuses 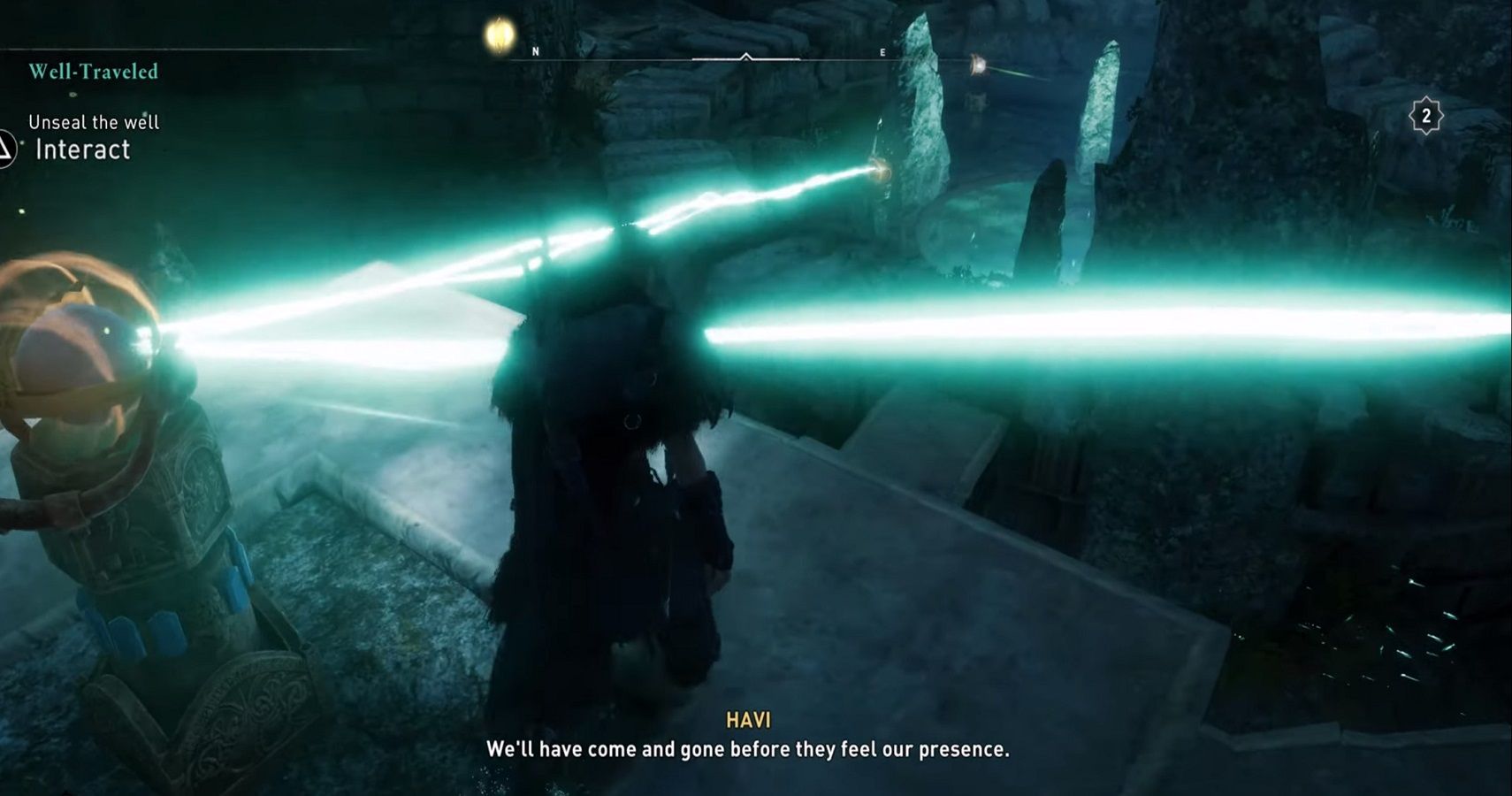