2020 has been a banner year for the realistic racing sim genre. TT Isle Of Man – Ride On The Edge 2 puts players on top of lightning-fast modern and vintage motorcycles. WRC 9’s in-depth game modes have players rallying across tracks from around the world. Although a bit more arcadey-feeling, Project Cars 3 still maintains a high-level of realism for hardcore racing fans. And now… Inertial Drift has launched, bringing its cel shading and drift-centric racing mechanics to PlayStation 4, Nintendo Switch, Xbox One, and PC. It’s not perfect, but Inertial Drift is a nice break from the hyper-realistic racing titles I’ve played this year, providing enough challenge (along with a killer soundtrack) to make it worth playing as a more casual racer.

Slide To The Left, Slide to The Right

I say “casual” in that – compared to other recently released racing titles – Inertial Drift is quite a bit lighter in tone. In fact, that’s kind of the point. While you will obviously be racing, the story mode will also have you interacting with your group of racing friends who are all vying for the top spot and taking the championship crown. Each member of the tight-knit group is supportive of the other. Even during races, your opponent will often send words of encouragement regardless of your position in the race. If you’re in front, they’ll be impressed by your racing skills. If you’re behind, they’ll see the silver lining (even if you’re continually bouncing off of the walls). The visual novel-esque element of the story mode felt unnecessary to me, but it was refreshing to receive support from other characters – especially since the twin-stick drift mechanics are far more difficult than they might appear at first glance. 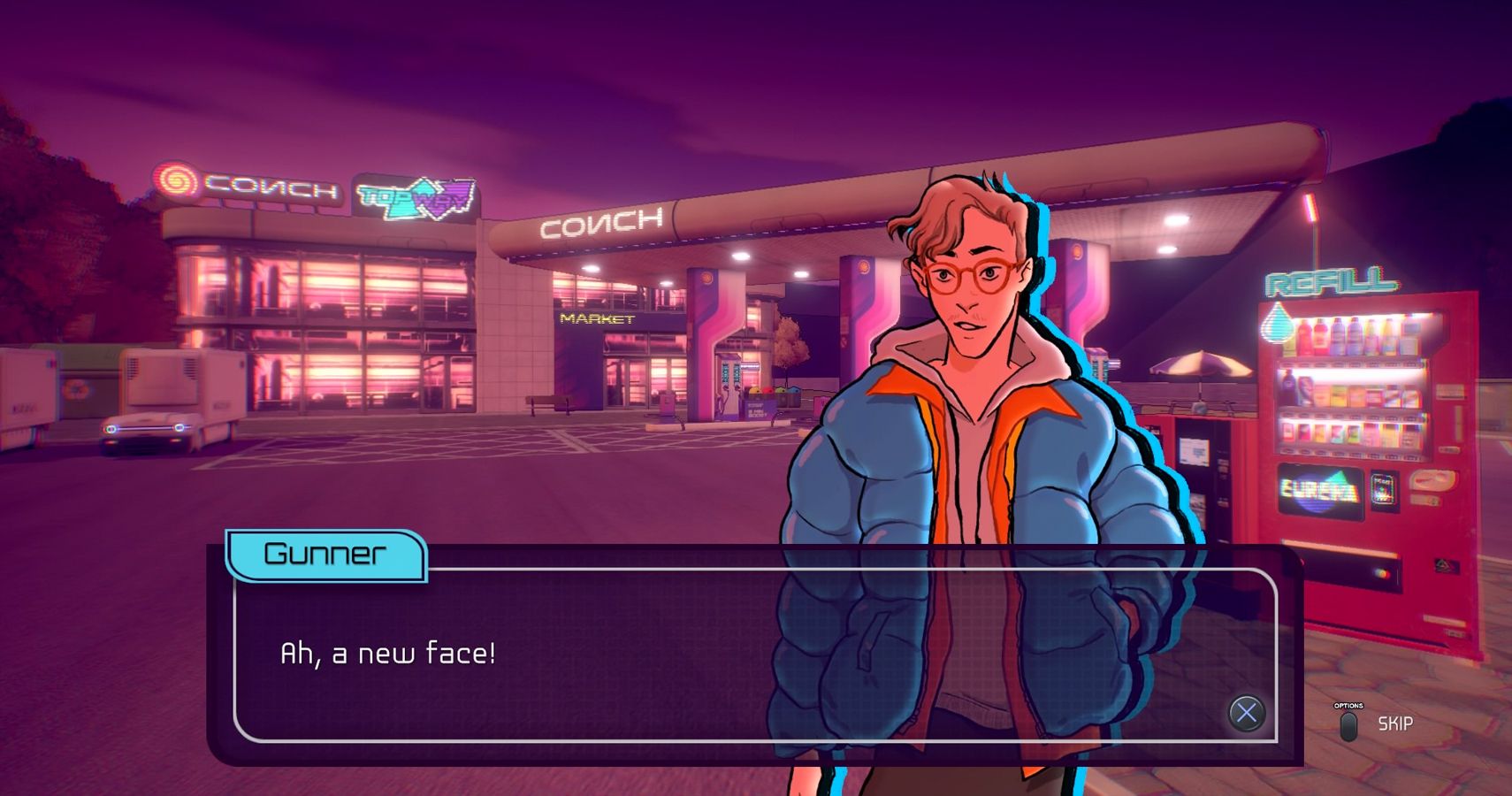 The primary appeal of Inertial Drift is written in the title. If you expect to win, you’ll need to be comfortable with drifting around corners at high speeds, sometimes even having to compensate for obstacles such as pools of water. You’ll use both of your controller’s joysticks to activate the drifts, using both to keep you hugging curves as tight as possible while still moving forward and preparing to exit the drift at top-speed. There’s not necessarily a lot to it, but putting it all into action takes lots of patience and even more practice.

You’ll be able to select from 15 different cars, all of which differ in things like handling and acceleration. Ultimately, though, your selection will be based on the degree of difficulty you’re willing to put up with. For instance, while not as fast in straightaways, the Terra Dart is a perfect beginner’s car to really get a feel for the game’s drifting mechanics. I happened to dive in headfirst with the HPE Dragon – which is essentially a drifting muscle car – and immediately regretted the decision after running through the first few story challenges. The two cars are insanely different when it comes to handling – a factor that extends to all of the different cars in the game. I can honestly say that no two cars handle the same, which allows for plenty of experimentation to find the perfect car that fits your playstyle. 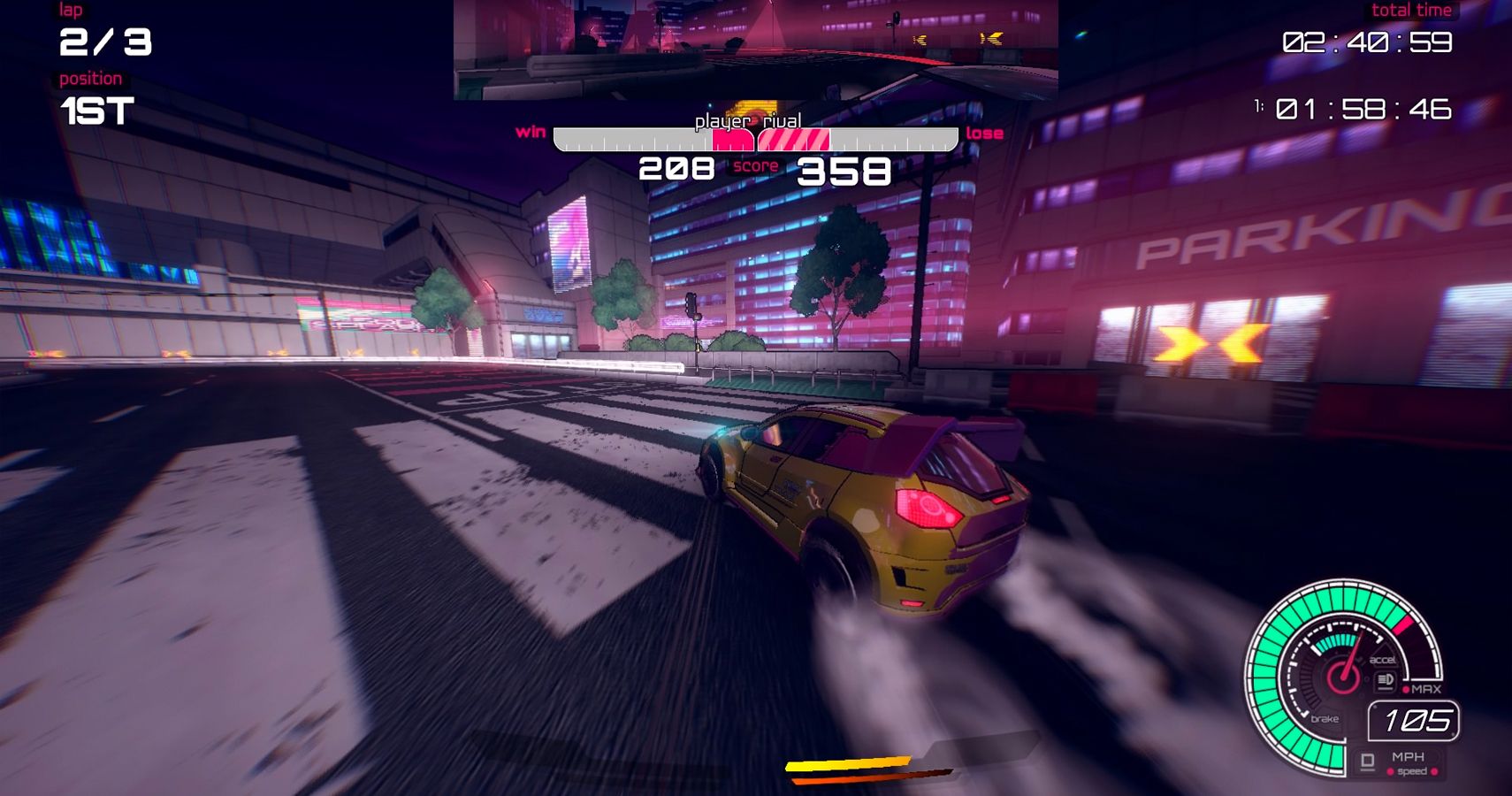 There is also an incredibly delicate dance that occurs with the throttle. When entering a drift, more often than not, you’ll need to totally lift off of the throttle, lest you smash into the wall. Once you start to successfully exit the curve, you can then hit the throttle again and start to straighten out.

Inertial Drift features a variety of challenges along with 20 different race tracks. Single-player mode offers up seven different race types, while local and online multiplayer offers up co-op and race modes, complete with ranked leaderboards. Challenges include ghost racing time-trials, duels (which is won by staying in first place for the majority of the race), and of course, head-to-head racing. Unfortunately, I have yet to connect to an online match. This may be a platform issue, though. The game seems to have a far larger community on PC than it does on PlayStation 4, which is something you should keep in mind if you’re looking to take part in online races.

Although Inertial Drift’s twin-stick mechanics take some time to master, the game is ultimately relatively easy to pick up (assuming you’re selecting the easiest-to-control cars). Add that to the fact that you won’t bump into any of your opponents while racing, and it’s not a stretch to say that the game is accessible for anyone to just jump in and start playing.

Of course, the lack of contact while racing could also hinder the experience for those looking for those typical mechanics during competitive races. You can still run into walls,  so the outcome of each race falls solely on your shoulders. No blaming other players for knocking you out of the race in this game.

Curse Of Curves (And That’s A Good Thing)

With its retro-future, animated aesthetic and soundtrack that fits the vibe perfectly, Inertial Drift is a treat for both senses. The twin-stick drift mechanics certainly won’t be for everyone, but if you’re willing to put in a little time, it’s ultimately a pretty enjoyable experience. Inertial Drift isn’t likely to take the top spot as my go-to racing title, but the light-hearted game is a nice break from the more realistic racing sims.

Play As Skull Kid In Cadence Of Hyrule's Majora's Mask DLC
Recent Posts
We and our partners use cookies on this site to improve our service, perform analytics, personalize advertising, measure advertising performance, and remember website preferences.Ok