Lair of the Shadow Broker is the closest Mass Effect has come to feeling like a genuine action blockbuster – and that includes the third game and its descent into endless set pieces where the very fate of the galaxy hangs in the balance. Even in these moments, BioWare fails to express the same level of dramatic nuance and magnetic pacing that makes this expansion so special. I never played Lair of the Shadow Broker upon its release, with my colleagues spouting jealousy about how I’m so lucky to experience it for the first time. Their excitement was obscenely on the money, since this is basically Mass Effect meets Uncharted with all of the wondrous hallmarks you’d expect from such a crossover.

You don’t see much of Liara T’Soni in Mass Effect 2. Commander Shepard’s passing and the absence that followed gave the asari scientist time to mourn, and a chance to carve out a new life away from the soldier she’d potentially fallen in love with aboard the Normandy. To Shepard, it was like no time had passed at all, and thus she often looked past the grief associated with her death, and how all of her squadmates were forced to abandon their previous positions and search for something new. Their leader was gone, and the Reaper threat showed no signs of slowing. Sitting around being sad wasn’t going to solve anything, so they moved on.

Much of the sequel is spent gathering these splintered allies together, making it clear that Commander Shepard is alive and more determined than ever. Liara isn’t willing to accept this change of circumstance so easily, turning down Shepard’s invitation to join her crew because new priorities have emerged in her absence. She can’t leave her new life on Illium behind in favour of a galactic roadtrip. People depend on her, and more important personal vendettas must be resolved before saving the galaxy can even be entertained. This is where Lair of the Shadow Broker comes in. The DLC is all about Liara and her purpose in the Mass Effect universe, and how she is capable of conjuring up something better without Shepard’s help. It’s brilliant, with this emotional foundation propping up all of the action that’s to follow. 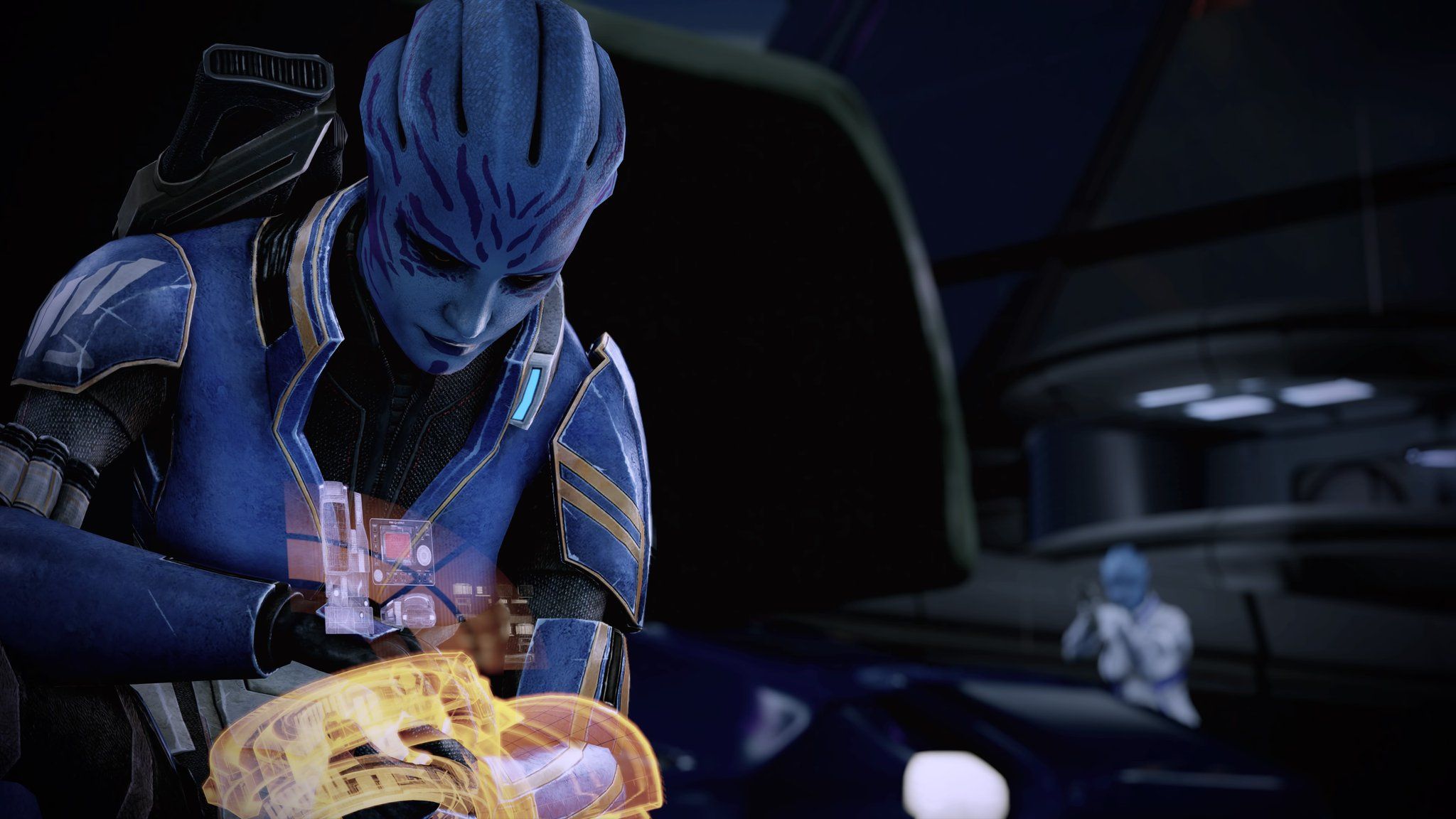 The whole affair begins in Liara’s apartment. It’s a voyeuristic glimpse into the life of someone who found a new place to belong, leaving memories of Commander Shepard behind in favour of a new future. Despite this, reminders of past escapades are littered throughout the place. Your old armour is found in a display case, small remnants of a sudden demise encased for all to see. Audio logs and datapads delve deeper into Liara’s current situation, and how unseen complications have forced her to seek out help, to confide in allies she had previously vowed to leave behind. Someone is trying to murder our friend, so we team up with Tela Vasir, an asari Spectre, to uncover her location and the true intentions of the Shadow Broker. It’s clear from the off that something isn’t quite right.

I won’t spoil exactly what happens in terms of narrative, but this sequence erupts into an explosive chase sequence that Mass Effect has never entertained before, with the futuristic metropolis and flying vehicles channeling Star Wars: Attack of the Clones and F-Zero with its chaotic mixture of sharp turns and quippy dialogue between Shepard and Liara. It’s so much fun, playing fast and loose with its character interactions while never forgetting the emotional core of the journey we’re currently propelled upon. We crash into an erotic nightclub and a firefight erupts. Once a boss battle is over and done with, we uncover the Shadow Broker’s true location and make for the stars. 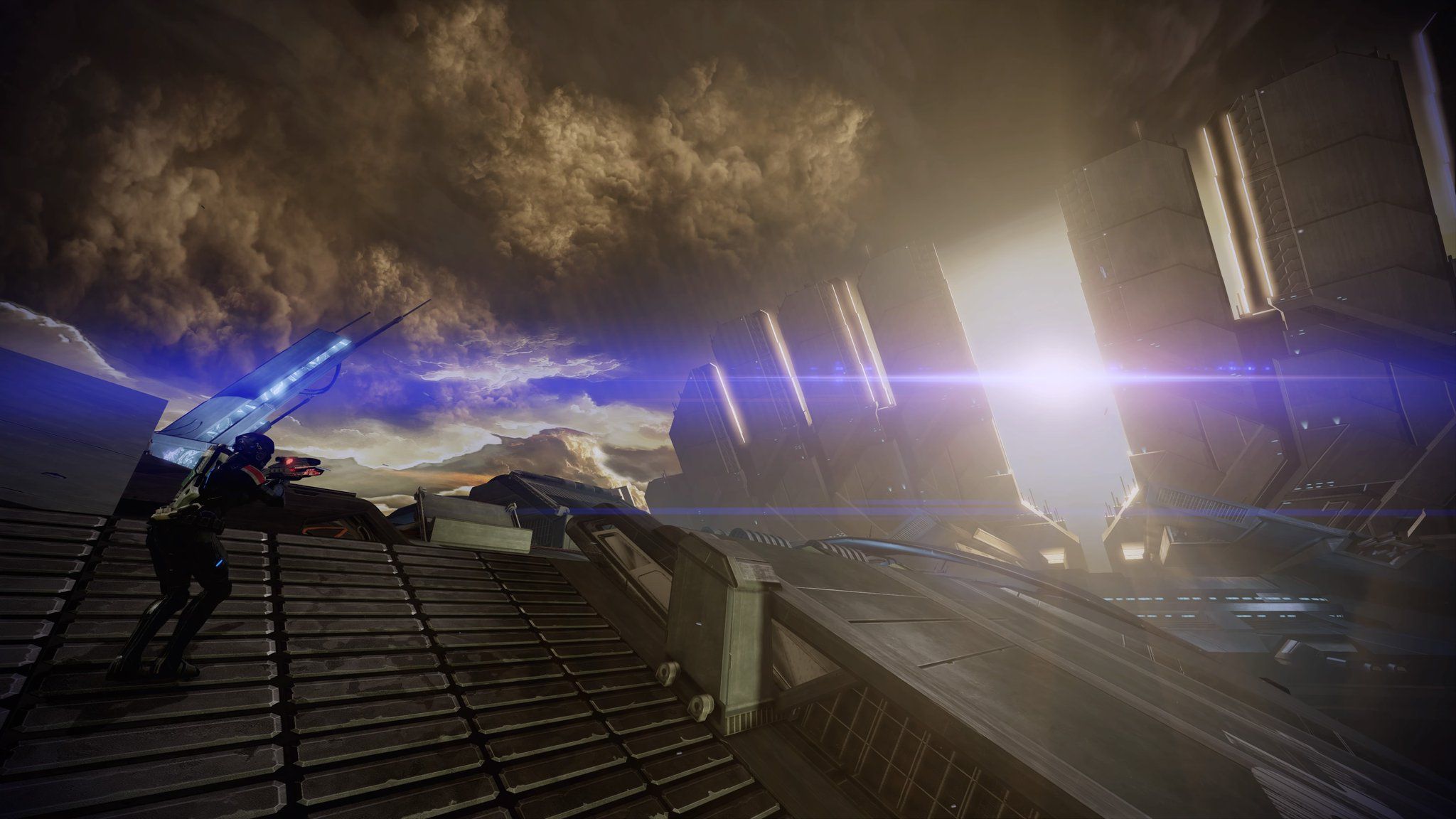 Even without the extensive section to follow, this mission on Illium alone is enough to label Lair of the Shadow Broker as one of Mass Effect’s most creative questlines, but BioWare decides to keep going, pulling us into a chain of events that constantly delights and surprises. The Shadow Broker is hidden aboard the Hagalaz, a monolithic ship that finds its home amidst an unpredictable lightning storm. It’s perfectly hidden, far away from civilization and rooted in an environment so hostile that nobody would dare try and breach it. There’s seemingly no way inside, so Shepard and friends hop aboard the exterior, ready to fight their way across the ship even if an unstoppable storm stands in their way.

What follows is a beautifully imaginative gauntlet of firefights that utilises the low gravity and aforementioned lightning to excellent effect. Corpses of enemies float away into the eruptive clouds above, while conductive rods located across the hull can be targeted to deal environmental damage to your foes. As all of this takes place, Liara and Shepard are constantly engaging in conversation. It’s funny, creative, and something that Mass Effect doesn’t do nearly enough of. You’re always in a squad of three, but the dynamic nature of who is accompanying you at any given time makes it impossible for scripted occurrences like this to feel natural. Shadow Broker leans into this, with the duo poking fun at one another despite the dire straits they find themselves in. 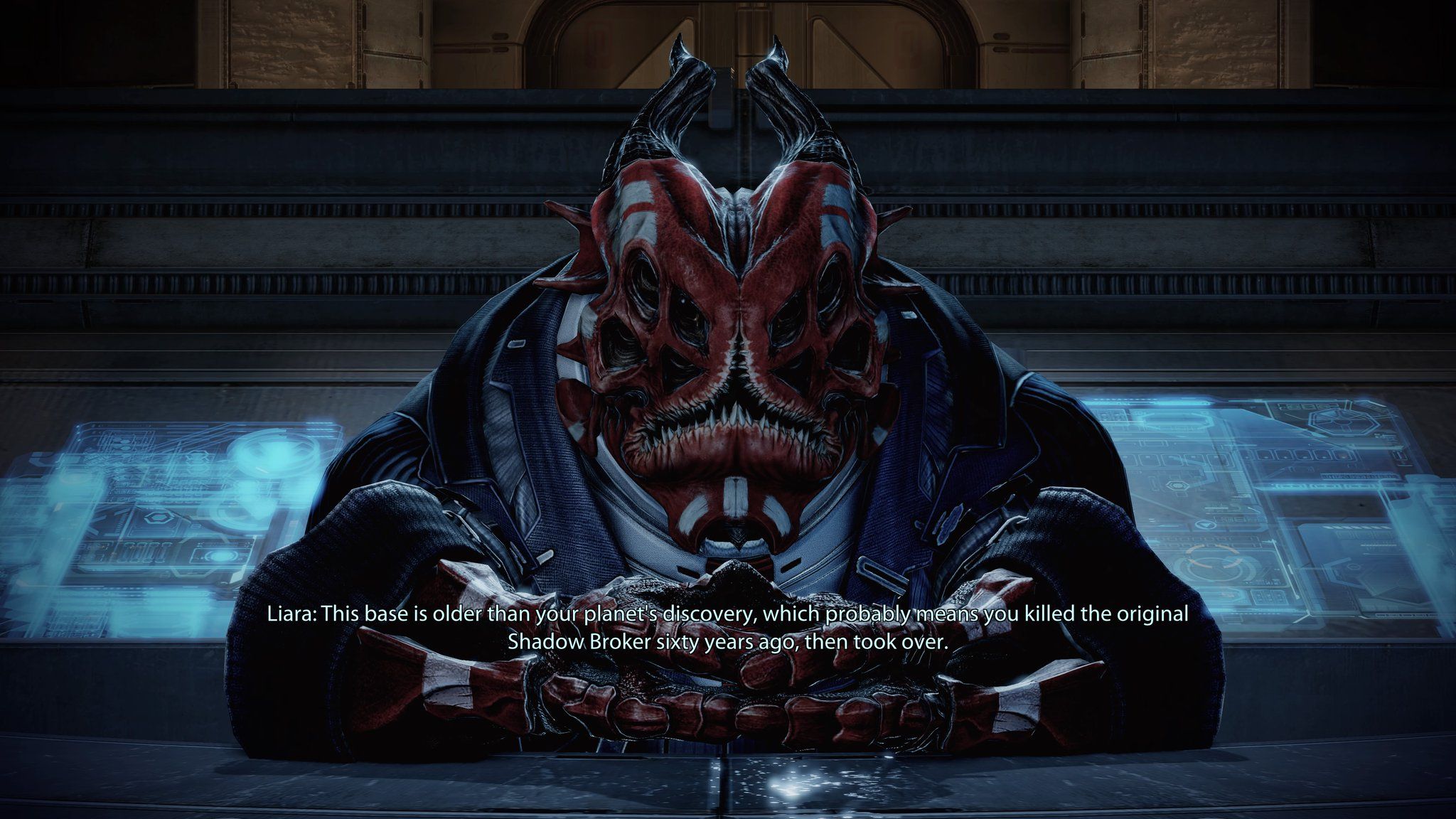 For a couple of hours, Shepard morphs into Han Solo, leaving behind the morally stringent dialogue that Mass Effect otherwise constantly delivers. It’s an unexpected breath of fresh air, like this adventure is intended to be a standalone foray into something more free-thinking and experimental. But the true brilliance is that Lair of the Shadow Broker is anything but, it’s a defining moment in Liara’s character arc, going on to inform her personality in the sequel and how she helps Shepard conquer the Reapers once and for all. Once the thunderous battlefield has been conquered, we step inside and finally confront the Shadow Broker. Depending on the allies brought alongside you, the villain even has a few unique lines of dialogue to deliver.

He’s an ugly bugger, and one of the finest boss battles Mass Effect has ever conceived. Covered in shields and armour, at first he seems impenetrable, yet after a few minutes it becomes clear that Liara can take advantage of his overzealous protection and leave him vulnerable for a few precious seconds. When this moment comes, Shepard can rush in and punch him directly in the face. It has all the phases you’d expect from a traditional boss battle so it does grow predictable, but it’s the atmosphere and interactions that surround it which make it so special. I felt like a galactic badass, expressing a sense of power that wouldn’t be possible without the friends at my side. 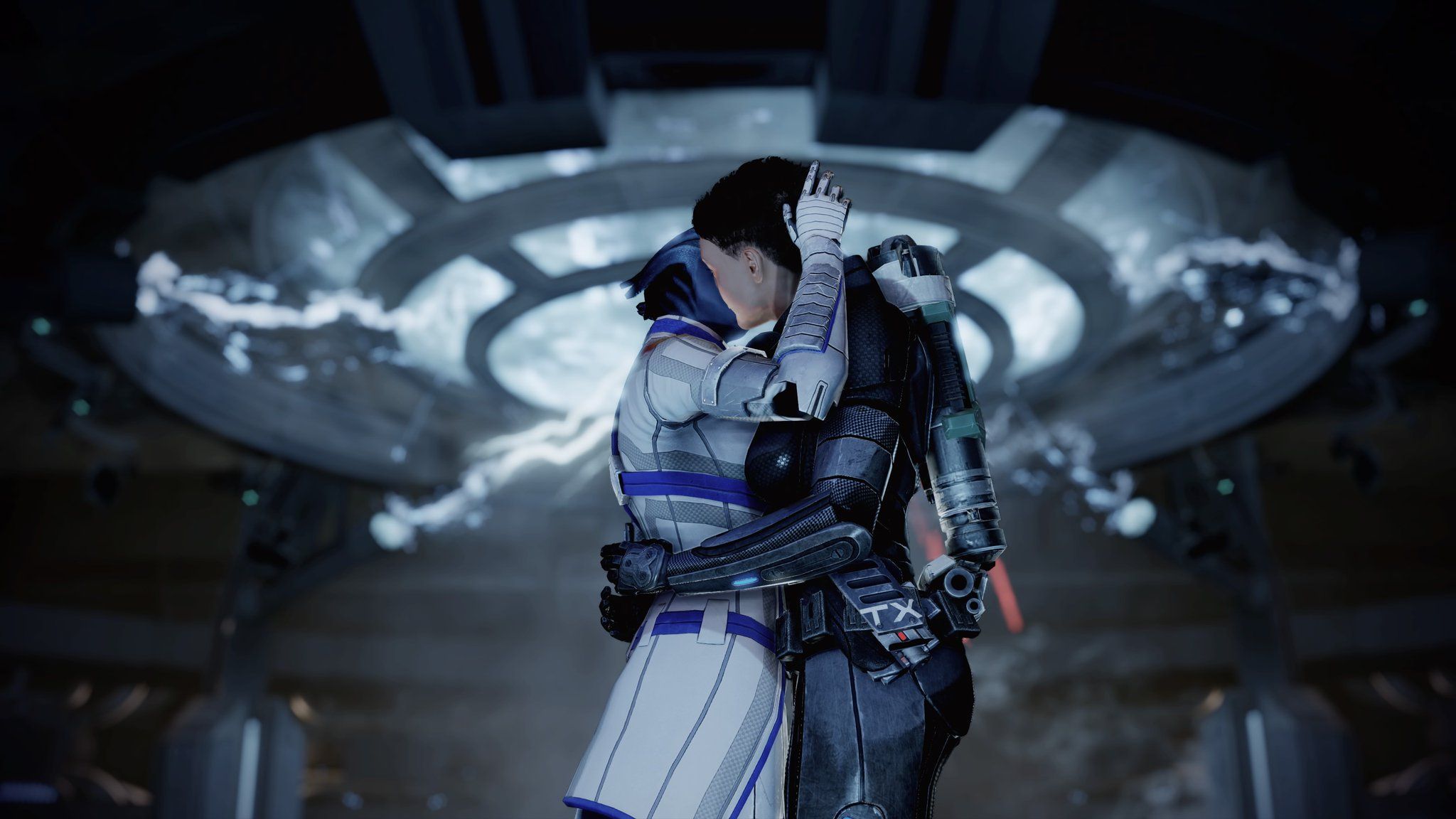 The quiet solitude that concludes Lair of the Shadow Broker is a welcome change of pace. Liara takes up the mantle, deciding to use the endless sources and insurmountable amount of information at her disposal to turn this criminal empire into something more wholesome. It can be a force for good, and a capable ally in the fight against the Reapers to come if used in the right way. If you romanced Liara I did, your relationship experiences a small rekindling, a new beginning rearing its head as the commitments Liara swore herself to have finally subsided. Sadly, work still comes first, as you go your separate ways after an intimate fling and never look back. It’s a bittersweet farewell, but one that sows the seeds for everything the trilogy’s final chapter would accomplish.

Lair of the Shadow Broker isn’t a deep, engrossing RPG experience, but it is a subversive action romp that shows Mass Effect at its very best. The writing, pacing, characters, and execution are all positively stellar, using its isolated nature as a piece of downloadable content to leave the main storyline behind while simultaneously expanding upon it. If like me you never had a chance to play this expansion back in the day, don’t let it pass you by with the Legendary Edition.