Need for Speed Heat is not a bad game. I’m just not sure what makes it a necessary one. Why are we still seeing this franchise? Why are we seeing a new one, now?

The game, otherwise a crowd-pleasing open-world arcade racer, gives the impression that it doubts itself, too. Its premise and main character are a little tentative — yet another outsider trying to make it big — but you don’t come to a celebration of street racing culture for big character arcs. The car fleet is varied and the means of painting, detailing, and tricking out these rides is deep, and none of it is exposed to microtransactions. It all sounds good on paper.

I’m still troubled to explain why the game doesn’t grab me. There is a lack of polish — close draw distances and pop-in, cars visibly spawning and bouncing at the start line, weird audio issues, the list goes on. No matter what else the game does well, all these issues make the whole thing feel rushed and barely finished.

All of the systems seem fine, challenging even, as I re-acclimated myself to the cornering and feather-braking techniques that aren’t used in the simulation-style games that seem to define today’s racing genre. There’s a sensible progression to the story missions, which didn’t involve a lot of grinding old races, as was the issue with Need For Speed Payback in 2017. Palm City is a varied open-world racing environment, though, again, it does seem to lack character. The strongest reactions I had to my surroundings were in the parts that most evoked Rockport, from the sainted Need for Speed: Most Wanted — a tunnel in Frontera Hills or the boardwalk in downtown. 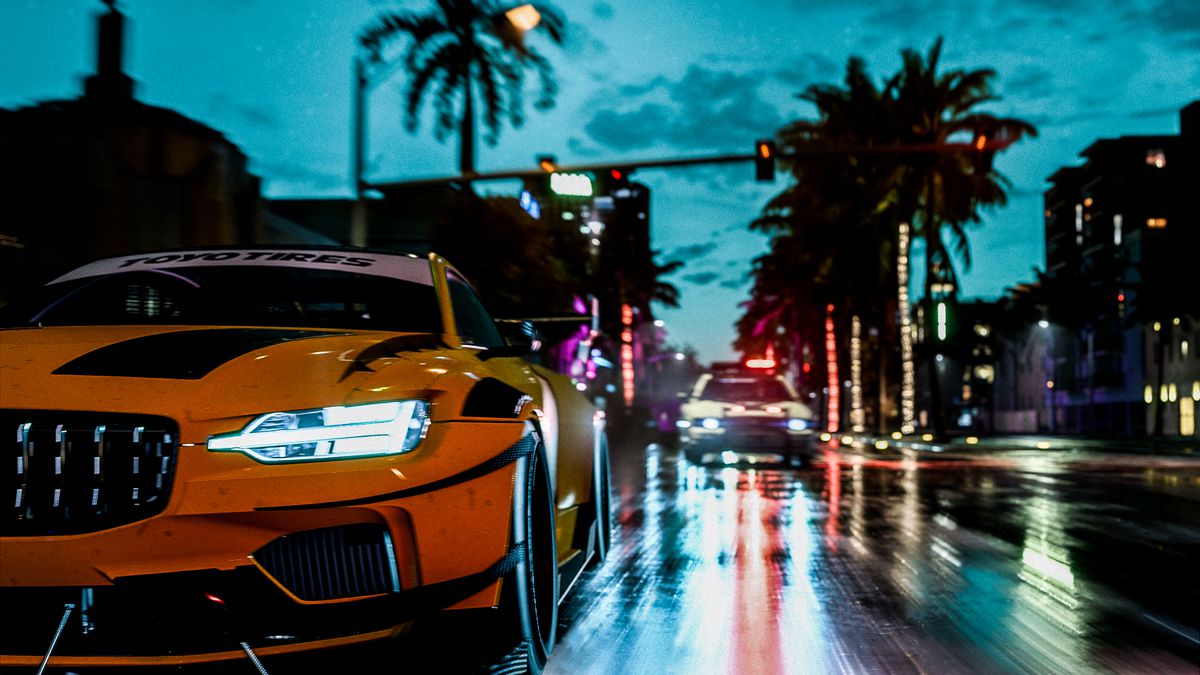 Palm City can be Miami, it can be Southern California. It’s fun to drive, either way.
Ghost Games/Electronic Arts

Maybe that’s what’s bothering me? Need for Speed Heat doesn’t resemble a throwback, as much as it seems like a desperate reach for what made the series so successful in the first place. I can hardly blame Ghost Games for trying in this direction, given how much it’s been hectored and henpecked, over the past two iterations, for not living up to an ideal engraved on consoles 15 years old. Everything in the Need for Speed franchise has been compared to Most Wanted, its debut on the last console generation, to the point the series rebooted as Most Wanted in 2012, then again as simply Need For Speed in 2015. If I’m confused about why this franchise still exists, these moves seem to ask the same question. What do people want from Need for Speed? How do they deliver it? The answer, at least for this game, seems to be a competent racer, nothing more, nothing less. But who is willing to get out their wallets for mere competency, especially in a year with so many strong releases?

Despite the plausible narrative — Palm City is home to the SpeedBreakers Festival, legitimate racing on road courses by day and extracurricular activities for strivers and attention-getters at night — the truth is, arcade racers at the end of this decade are much less necessary for the enjoyment of exotic cars than they were in the middle of the last. Yes, there is customization aplenty, unfettered by loot boxes, in a clear apology for Payback’s biggest gripe. But still, that doesn’t make the circuit, sprint, or series you’re racing today more enjoyable by themselves.

In the early goings of Need for Speed Heat, you’re sweating through the up-from-nothing street racer fantasy, working with a POS (in my case, a Nissan 180SX) that needs to hit every corner perfectly to win. Then, POW, I quickly found myself with enough cash to buy a 2006 Lotus Exige (about 76,000 “Bank,” as the in-world currency is called). I dominated every race by nearly two seconds from there on.

Need for Speed Heat also introduces drift racing toward the end of its series of introductory missions, which still carried me deep into the levels of my legitimate and underworld racing career. Drifting is a race where my Exige won’t cut it. Although you can, conceivably, tune any car in any direction, from a pure street racer to an off-road drifter — it’s easier for me to grind up the cash to get a car whose stock configuration can rack up long slides around the corners for a crowd-pleasing score. 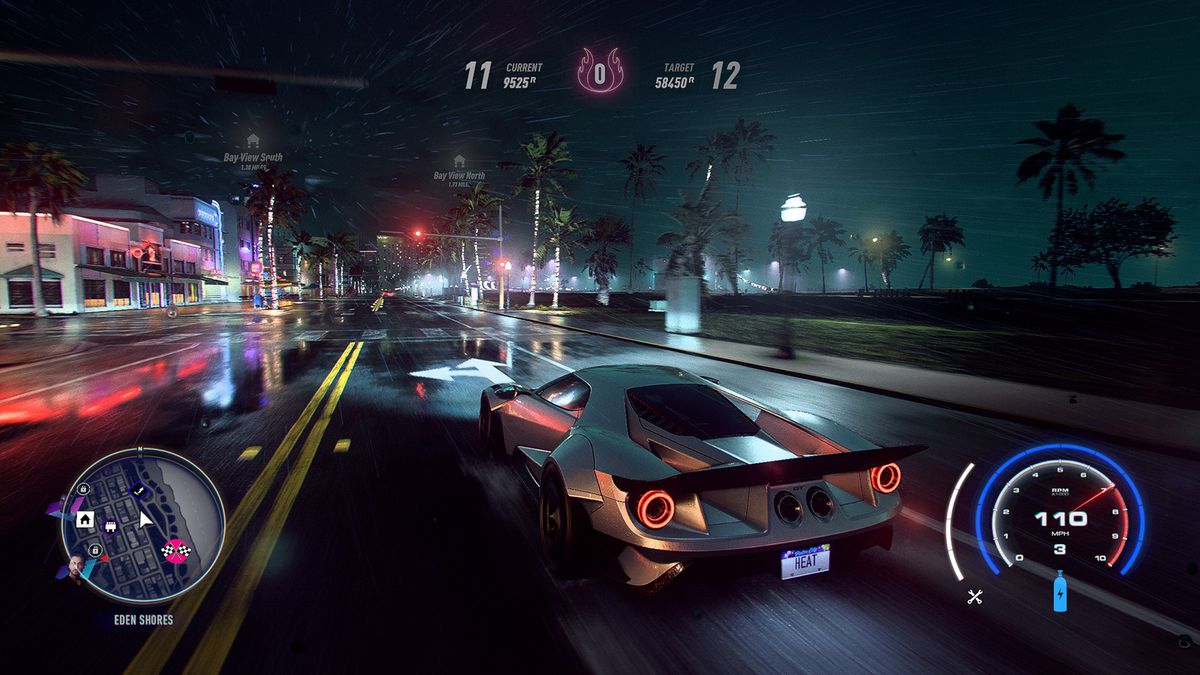 Every car in Need for Speed Heat can be customized to the user’s preference, whether pure street-racing or off-road dirt drifting. Some vehicles are better suited than others, of course.
Ghost Games/Electronic Arts

To Need for Speed Heat’s credit, both the handling for drift vehicles and the tutorial for getting those maneuvers right had me mastering this skill immediately; it took forever in Payback. But then I bought and fashioned up a drifting car — a 2002 Mazda RX-7 Spirit R, for even less Bank than the Lotus — and dominated there as well. Need for Speed Heat feels like one of those shooters with generous aim-assistance and enemy AI, knowing that its players want to feel like a badass, and doing just enough to get them there, despite the lack of any real skill or progression. If you want to go fast and win, Heat has you covered. If you want to grow as a racer, look elsewhere.

Online racing is a completely different beast, and Need for Speed Heat has a large online component, I’m just not sure it sells itself as the dominant mode of play. Players are given the choice of racing in a solo or multiplayer world. Because of Heat’s day/night differentiation — legitimate racing, without traffic interference, by day; underground racing on open streets at night — multiplayer’s variety is mainly felt through night-time play.

In daytime racing, I was simply looking to check off races and earn Bank from them, so I didn’t want to wait to make multiplayer connections for these tasks. At night, racing against human drivers gave the set events some variety, although it was tough to tell if it was because of their skill or the interference of random oncoming traffic. The open-world multiplayer environment is there to give cops someone else to chase, either during or after a race, or a way to break out of Need for Speed Heat’s long-winded pursuits when a cop happens to catch you out in the open.

In night-time driving, even sitting parked at a gas station will get the cops into bust mode, so you’re guaranteed of some police involvement when you roll out after sundown. This is a fine thing and a strong differentiator. 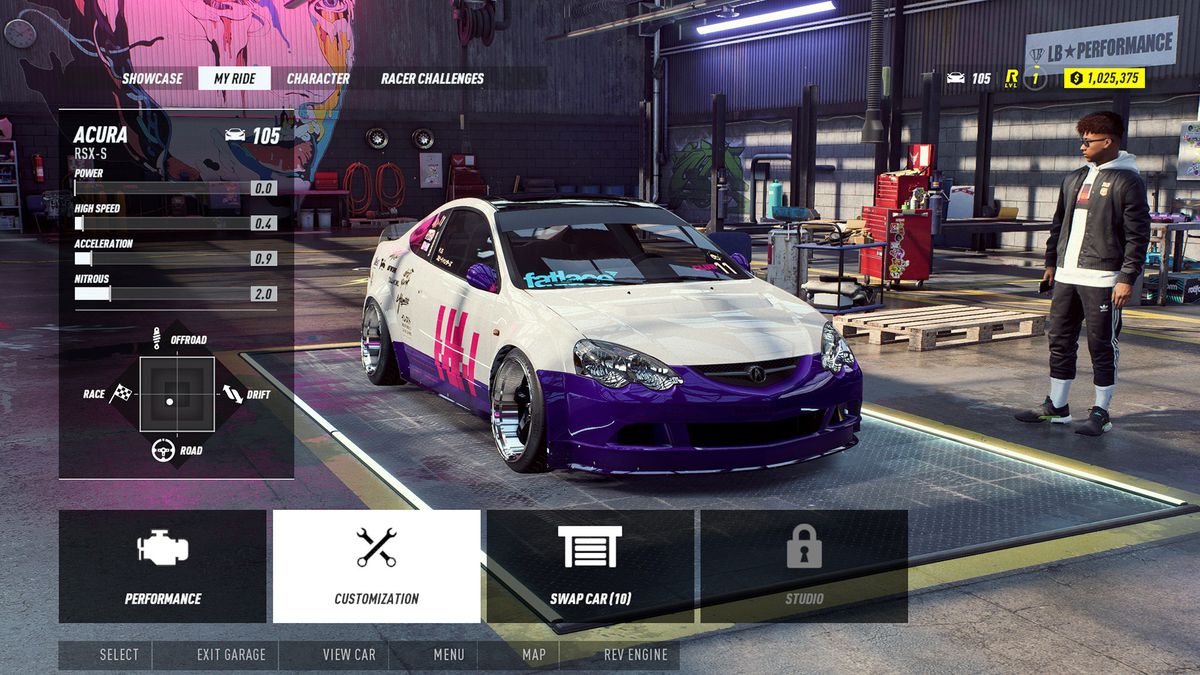 There are numerous cosmetic and performance customizations in Need for Speed Heat, none of it touched by microtransaction.
Ghost Games/Electronic Arts

But because losing police depends entirely on breaking the line of sight — there are no “pursuit breakers,” to drive through, no designated cover spots to park in — the difficulty spikes tremendously once you get a second cruiser on your tail. With my tricked-out Lotus, I could dust one cop as soon as the chase had begun. Two required emergency-braking and physics-defying u-turns to lose them. Three cops, you may as well give up.

Getting busted at night isn’t a tragedy; you only lose a percentage of your existing bank account, and you will still gain “Rep,” the underground currency that gates certain events and unlocks super-duper car parts you’ll need in the larger campaign. You just don’t get as much Rep as you would have otherwise. So the impossible odds of a multi-car chase, versus the low stakes of getting busted, conspire to create a bland pursuit-and-evasion stage of the game. This is supposed to distinguish Need for Speed Heat, but instead makes its most epic chases seem chorelike and interminable.

In the end, that’s probably why Need for Speed Heat feels so bland — an entirely enjoyable diner meal when I’m on the road, but nothing I’d take friends or family to. Racing video games are now in a time when when graphical fidelity and raw computing power can deliver access to driving experiences we only dreamed of during this franchise’s real heyday. And yet, in present day, Need for Speed Heat seems limited, reminding me of all the things that made it distinct, but still hedging against them in case I don’t find them enjoyable. I’m confused about what would have made this game better, but the series seems just as confused about what it wants to be.

Need for Speed Heat launched Nov. 8, 2019 on PlayStation 4, Windows PC and Xbox One. It was reviewed on Xbox One using a final “retail” download code provided by Electronic Arts. You can find additional information about Polygon’s ethics policy here.