As soon as one loop closes, another begins. The route remains the same, although we can make slight alterations to what we encounter along the way. As we push on through each day, we become gradually stronger, but so do our adversaries – it feels as if the more we adapt, the more the world around us readjusts itself to counter that. Eventually, whether it’s after two days, 22 days, or 222 days, we will give up – but only temporarily. Ultimately, it’s in failure that we learn to pick ourselves back up, and our next journey around the loop will be all the better for it.

The above paragraph describes both the premise of Loop Hero and my daily routine for the last year. Playing this game now feels absurd – I’ve been repeating the same basic day over and over since the pandemic started, and yet I have become completely enraptured by the concept of doing the exact same thing in the virtual apocalypse of Loop Hero. I think this game is subconsciously empowering, because of how hope feels both futile and enduring at the same time. It’s like slowly converting the phrase “nothing is going to change” from a pessimistic forfeit to an optimistic drive to make something change. “Nothing is going to change, I might as well give up,” quickly becomes, “Nothing is going to change, unless I personally make it happen.”

Loop Hero accomplishes this by brilliantly contextualizing minor victories. If you spend an hour running round and round the circuit, with potentially dozens of consecutive days passing, it’s totally fine to only come back with two pieces of preserved wood and some rocks. Not enough to build a smithy, but a good start – best rest up at the campfire and make our way back to the dilapidated remains of a forgotten world, filled with all kinds of treachery but also brimming with a weird aura of hope. 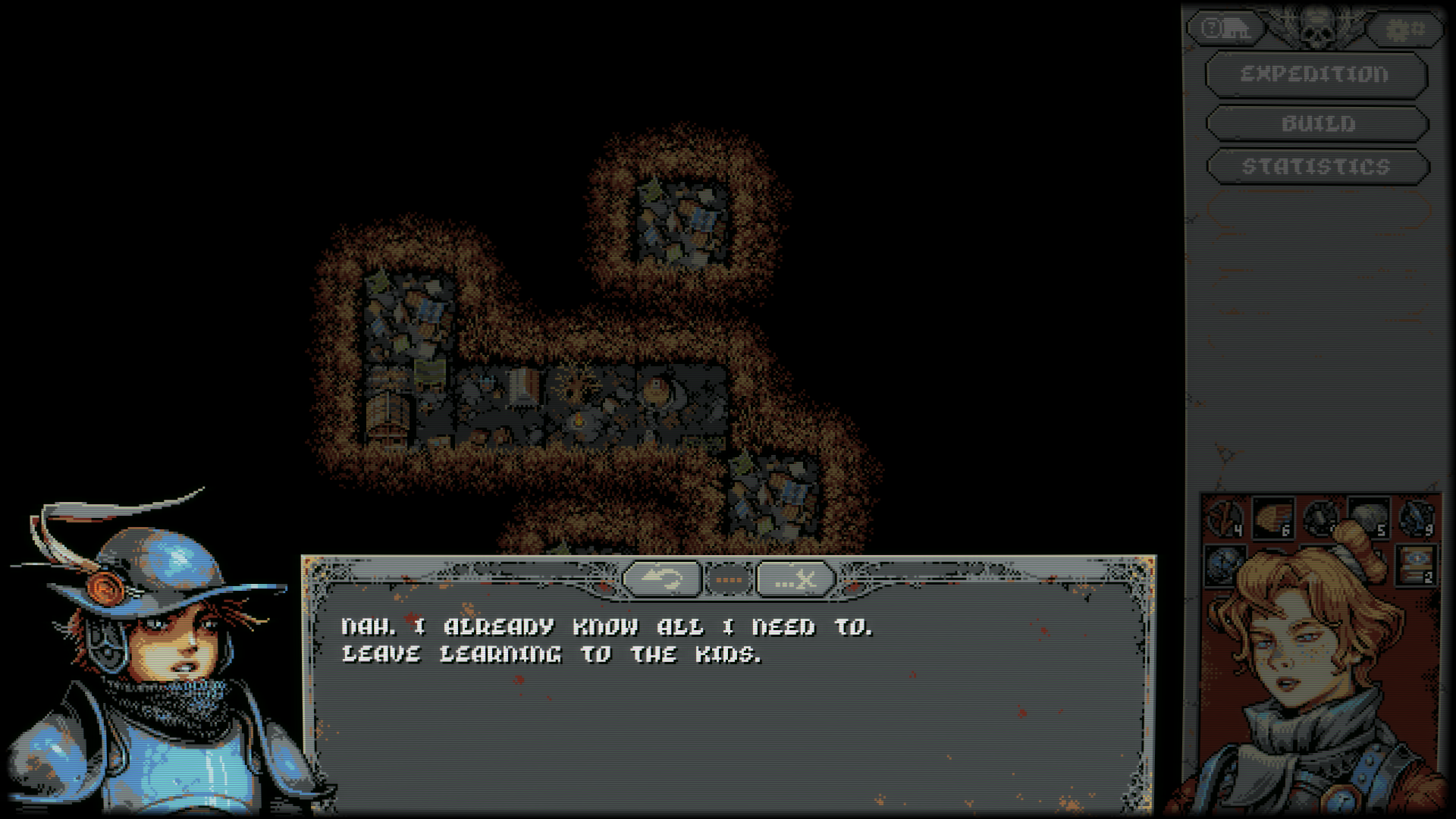 It’s an astonishingly apt allegory. Every time you complete a loop in Loop Hero, it’s like passing Go in Monopoly. Instead of getting 200 fake pounds, though, you get a nice little health boost – the thing is, you might have finished the loop far lower on health than the previous one. It’s like waking up on a Tuesday during the pandemic – yeah, the sleep sure did help, but I still feel like shit. Tomorrow won’t be much better, but Thursday? Well, at that point the campfire – or, in real-life terms, weekend – is in my sights. I’ll just gather a few more resources (see: money to live) and then we get to recharge for a bit. Still not the old world, mind, but there are people to talk to, whether they’re strangers in a dark video game or our best mates via Zoom. It’s a weird, liminal respite that is nowhere near the real deal, but exists as its own kind of unique reprieve at this weird point in history.

I also think it’s a perfect representation of all the small things that have kept us going. Talking to the herbalist in Loop Hero after building her hut reminds me of going up to the cashier in the supermarket, all masked up and socially deprived, just to go, “Wait, what?” when they ask you how you’re doing. “I said how’s it going?” they explain. “It’s nice to chat, isn’t it?” Damn right it is.

There have been a few times during the pandemic where I’ve thought, do you know what? Screw it. What are we even doing? I might as well just go and live in the woods. Those are the times I’ve died in Loop Hero, where the tedium of repeatedly circumventing the same stupid loop properly got to me. But every time this happened, some form of real-life campfire equivalent kicked in and made me cop on. A good day at work. A socially-distanced walk with a pal over takeaway coffees, where they go, “Give it a rest, we’re on track, keep the head up.” A four-hour session in Loop Hero where I mindlessly grind the same core loop to paradoxically realize just how different everything is within what is ostensibly the same. Sure, I work from home, then spend my free time at home, then sleep at home… but while the days all blend into one eventually, you can recognize how different they are when you focus on living in the moment. I sat in this exact chair yesterday, typing away, but I didn’t write about Loop Hero. It’s almost the same, but not quite – and that’s important. 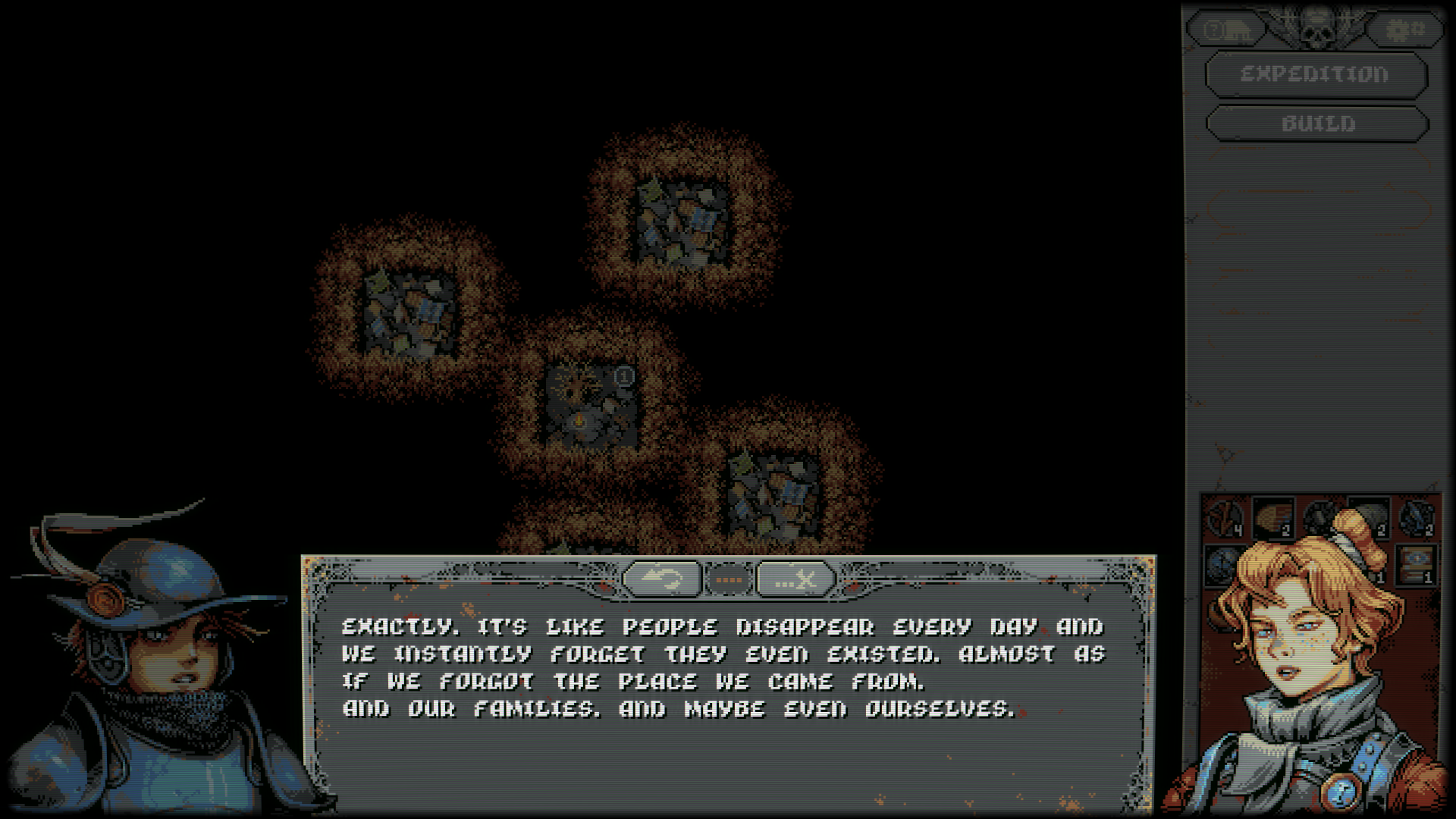 Loop Hero’s protagonist has all but forgotten the old world. He knows there was one, and he knows it’s worth fighting for. He vaguely recalls the shapes of things and can recognize malevolence, but ultimately, he spends all of his time longing for something he’s not even sure fully exists. Still, he fights, fails, and fights again for it, over and over until you allow him to stop. And because you can see the fruits of his labors – you’ve constructed a supply depot, and built a gymnasium, and planted a gorgeous forest – you’re able to see that, actually, doing the same shit over and over again isn’t pointless. Our vigilance and patience are all leading up to something, and the deeply cyclical context of this game has enabled me to see that bright and clear, a beacon of hope burning in front of me.

After a full year of repeating the same day, it took the weird, meta context of an innately repetitive game launching exactly a year later to realize how much power we still have. I was more in the Nine Inch Nails Every Day Is Exactly The Same mindset for a bit, but I reckon I’m finally ready to move on from that. Yeah, our freedoms are relatively (and importantly) confined for now, but all loops continuously run until they break, at which point the people who have been running the rat race for days, months, or years are finally free to venture off into the unknown – or, in the case of Loop Hero or the real world, the almost but not quite yet forgotten.

I’m excited for the world to go back to normal. Until then, I reckon I’m going to spend a lot of time learning to find solace in the loop.