I’m having a blast with this game, not because I’ve mastered what it takes to be the best, but because I’m playing it the best way I know how: like a sneaky jerk.

My life as a rogue

Since I don’t have time to invest into mastering swordplay, I started playing the game in a way that’s not only effective, but only slightly dishonorable compared to the more serious community Mordhau draws in. Playing like a scoundrel has been so entertaining, I just can’t help myself.

Mordhau is a medieval-themed brawler, so all the fighting happens up close and personal with swords, maces, and spears. I can play the game in first- or third-person but, either way, each and every attack feels brutal and punishing. Mastering parries, counterattacks, and even which direction I swing my weapon is essential if I don’t want to get beheaded.

Getting my bearings in Mordhau’s tutorial was a bit rougher than I expected, but I thought I had a good grasp on the combat once I completed it. I quickly realized that just about everyone else had way more practice than I did once I went online, and I was unlikely to catch up on my schedule.

So what do you do when you can’t win on their terms? You fight them on yours.

I spend the most of my time playing Mordhau’s Frontline mode, a 64-player battle between two teams. This requires a bit of teamwork, since we have to capture and hold objectives. While this mode is messy and chaotic, each time any of us perish we can only respawn at one of the objectives we’ve taken. If the enemy recaptures any of those zones then the front gets pushed farther back, making it difficult to regain ground.

Frontline is an exciting tug of war, with dozens of sword fights and skirmishes happening at any given time. I want to make sure I was contributing to my team’s success, even if I’m not yet a skilled fighter. Most players take their duels seriously, and spend a lot of time in other game modes working on their basic skills. My goal was to find a way to play smarter, not harder. I’m also not overly concerned with chivalry. 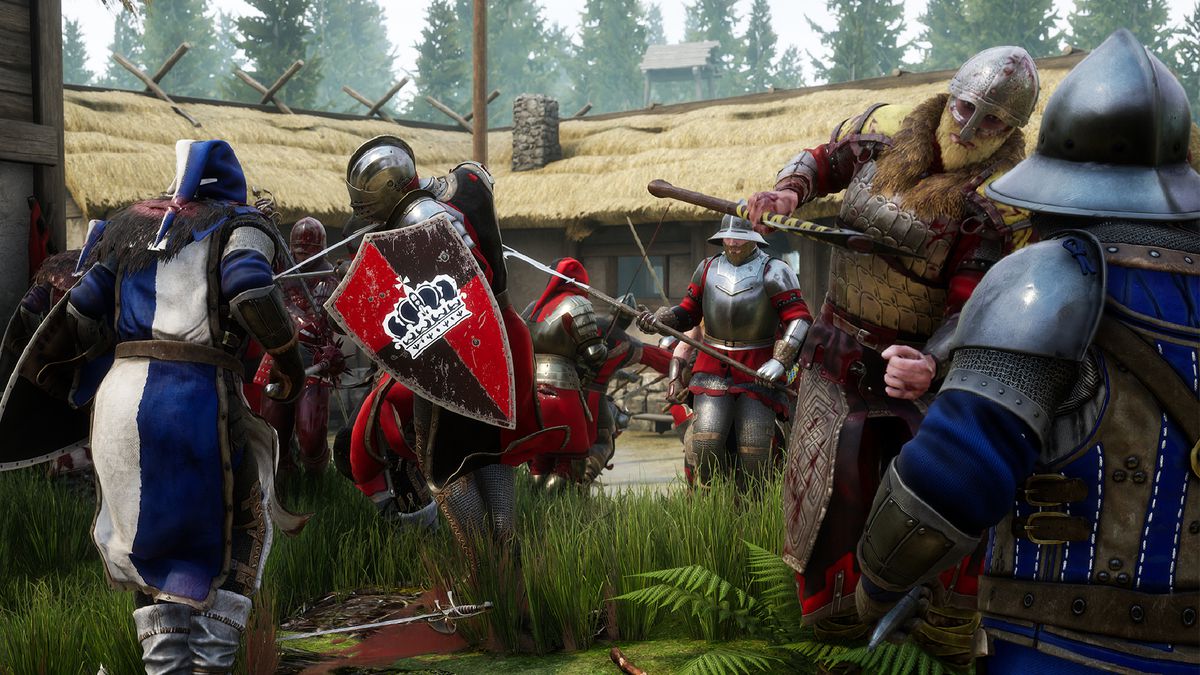 I tried out ranged weapons first, figuring my skill at first-person shooters would pay off. Mordhau’s armory offers two types of bows and a crossbow, along with some thrown weapons. My goal was to sneak around and pick off enemies while they were grappling with my teammates.

After a while I was able to score a few long range takedowns, but each shot took quite a while to line up and I missed more often than not. I ended up wasting much of my limited ammo since everyone moves around so unpredictably.

Being an arrow-slinging pest is fun, but I never felt like I was taking out enough enemies to really make a difference. I was spending too much time learning how to shoot differently and I don’t want to devote myself to refining my aim. In short, it’s not the shortcut I’m looking for.

Eventually I stumbled across the perfect weapon. For me, at least.

Taking a stab at melee combat

Mordhau allows chat with everyone currently in my game by default, for better or worse. The open chat is mostly a breeding ground for smack talking or reprimanding teammates who accidentally kill you with a wild sword swing. But, most importantly, it’s a fire hose of information.

I learned which weapons are the most effective through the complaints in the chat, and it turns out those are spears, rapiers, and shields. These weapons are also much simpler to use than the standard sword or ranged weapons, and many players seem to look down on their use.

The bulk of players in Mordhau also attack with horizontal and vertical strikes to cut down their foes. That makes sense, since those attacks are bound to the left mouse click and and you can modify them by moving your mouse. It’s a natural way to control your attacks for anyone who has played a first-person game.

I can also stab opponents by scrolling up on the mouse wheel, however. It’s an awkward movement at first, which is probably why it’s so rare, but it’s also wildly effective. Getting stabbed is far and away the biggest complaint I’ve seen in Mordhau’s open chat, which means I have to try it.

I make stabbing my only style of attack. I set one of the buttons on the side of my mouse to stab so I don’t have to use the scroll wheel anymore, which makes it much easier to pull off the attack.

I first gravitate to the long spear to test the effectiveness of my stabs. The weapon has amazing range and does a lot of damage, and its length allows me to get in at least one hit before an enemy can get within proper striking distance. Using the spear feels like a cheat code at first, as I begin to climb the leaderboards during each round.

But this approach isn’t perfect.

I have a limited number of points to use when creating a new loadout in Mordhau, and each piece of armor, weapon, or character perk costs a different amount of points. Powerful weapons and abilities cost the most points, which means that the long spear is expensive, and leaves me few points for armor. This makes me a glass cannon: I hit hard, but I can be taken down just as easily if someone is able to move in close.

I choose a perk called “Bloodlust” that restores all my health after I defeat an enemy with a melee attack, which helps to keep me alive. I survive long enough to lay waste to multiple enemies with my spear, some light armor, and this vampiric perk. I call this loadout “Relentless Pest.” 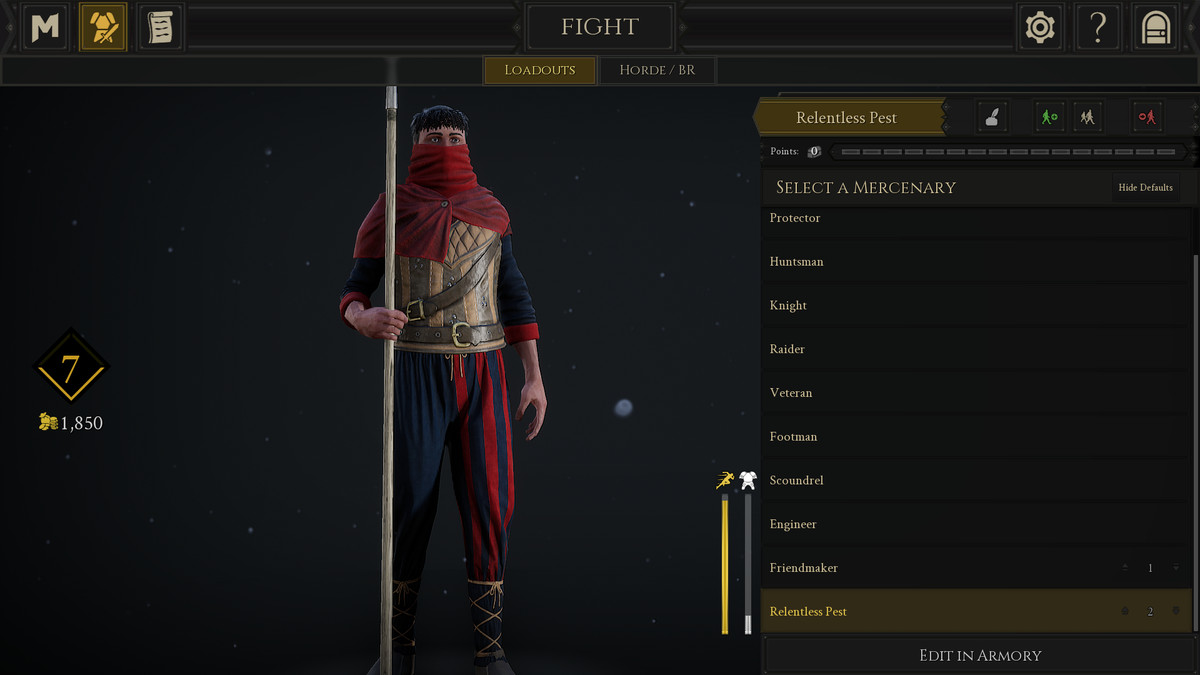 My first attempt at building the ultimate fighter
Image: Triternion via Polygon

This strategy was also less than perfect. I’m toast if I ever find myself staring down two other players, and I had few options if someone was able to break through the initial range of my spear.

I retire the Relentless Pest and focus on finding an even better strategy.

If my enemies hate it, I want to use it

I again turn to complaints to fine-tune a build that lets me do well without too much practice. I learn that, while some players hated the spear, the most despised weapon on the battlefield is the rapier. The short sword lacked the range of my beloved poker, but it’s one of the fastest weapons in the game. I can get in several stabs before enemies can raise their swords to strike back. I learn to love the rapier, despite the howls of frustration it causes on the field of battle.

Thankfully, the rapier uses fewer character creation points than the spear, leaving me more options for armor and even a shield. And players hate the shield.

I can keep my shield up and deflect incoming attacks with ease by holding down the right mouse button, as opposed to correctly timing critical parries. It just works. I can also sprint full speed with my shield drawn, allowing me to rush into combat unafraid of projectiles or enemies who might strike when they see me coming.

Oddly enough, few other players in the game use the shield, and I get it. It’s far more satisfying to deflect attacks and counterattack with a sword, but I don’t have the time or energy to develop that talent. Players sound like they feel dishonorable using the shield based on what I see in the chat, which also makes sense. In a game so heavily inspired by medieval influences I can understand if players want to role play as more honorable and skilled fighters.

But I’m not one of those people.

The combination of a rapier and shield quickly help me become a true nuisance on the battlefield. I can dive into a mass of enemies knowing that any strikes against my shield will have little effect, and I can then stab back with little regard for “perfect” timing. I spend my time weaving around battles, punching holes into my enemies as I see fit, reading their frenzied chat messages calling me all sorts of names. 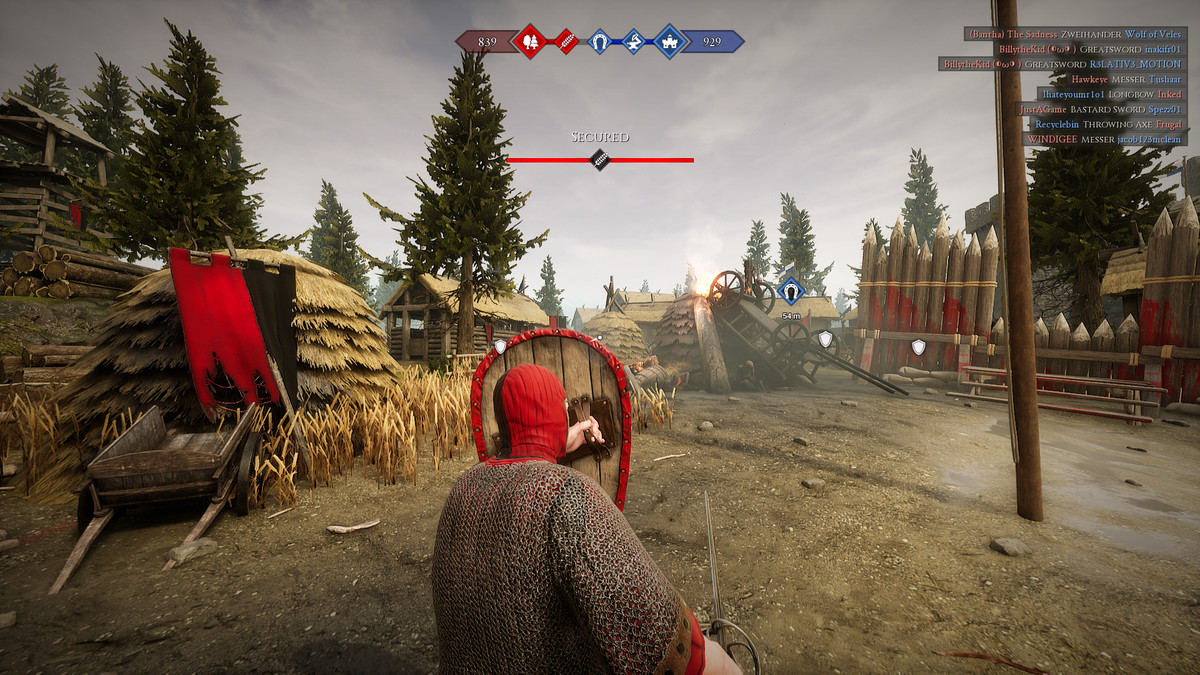 I named this build “The Friendmaker”
Image: Triternion via Polygon

The final evolution in my pursuit to become a true force of destruction is to implement my favorite aspect of combat: chaos.

Mordhau’s Frontline mode is violent and keeps me endlessly busy. Scores of players are squaring off and everyone is focused on the individual battles they’re having. The most skilled players can effectively dodge, parry, and counterattack to destroy one or even multiple enemies at once. That level of play demands a lot of skill and focus, so I decide to use my enemy’s talents against them.

To do so, I sneak around the battlefield looking for pre-existing fights. I swoop down on distracted opponents and pierce them with my rapier. No one ever said the fight has to be fair, and I make sure the odds are always in my favor before I engage anyone. I’ll leave the fair fights for the most talented players. I’m here to swiftly swing the balance in my team’s favor.

You might find this strategy deceptive or even cowardly. I don’t blame you.

But it takes all sorts to win the battle. Heavy bruisers push the front line. Archers assault from afar to thin out oncoming enemies, and skilled sword fighters clash with opponents cutting down those less adept as them.

Then there’s me: the sneaky, stabby rogue. Whenever I find a teammate on their back foot, desperately parrying an onslaught of attacks, I can dive in and save their hide. Knights cutting down multiple members of my army are my favorite targets since I can squash their hubris and momentum in an instant.

Most important of all, I take out anyone who didn’t even notice me behind that bush, building, or pile of rocks. And if you do see me? That’s fine, I can keep your distracted while someone else takes you out.

My final form is still susceptible to attacks from the side, and the most skilled players know that kicking attacks are the perfect foil against shield users. But this approach lets me contribute to my team’s victories, even without hours to practice.

I may not be everyone’s favorite player on the battlefield, but this is my favorite way to play Mordhau.