After several substantial delays, MechWarrior 5: Mercenaries is ready to launch for Windows PC on Dec. 10 as an Epic Games Store exclusive. The developers at Piranha Games are ready to let loose with the first in-the-cockpit BattleTech simulation in nearly 16 years. To celebrate, they’ve helped create a series of short stories.

Titled MechWarrior 5 Origins, this novella-length collection is available for free online. They tell the backstory of Nik’s Cavaliers, the new mercenary command that will be center stage in the final game. These short stories also happen to be penned by Catalyst Game Labs’ Randall N. Bills, who has had a hand in Harebrained Schemes’ BattleTech turn-based strategy game and co-developed the story for MechWarrior 5.

Below is an exclusive excerpt from the third installment of MechWarrior 5 Origins, titled Endless War. You can read the first two installments, in EPUB or MOBI format or automatically through a selection of ereader services, at the MechWarrior 5: Mercenaries website.

Almost before the hoist came to a stop fifteen meters above the deck plating below, Ryana Campbell ignored the gate, slipped over the side and took a hop to the Highlander’s shoulder.

Why do they always assume I’m not careful? I’m always careful…just not how they want me to be.

Unlike many BattleMechs, the Highlander’s shoulders were rather flat, allowing for easy maneuvering around to the ingress hatch located at the back of the square-shaped head. She didn’t need to key in a code as the chief had already prepped that stage, and she spun up the hatch, slipped inside, and dogged it tight.

Aromas more familiar than her own body engulfed her senses: burnt metal, well-worn leather, cleaning-solution residue, the tang of blood not completely removed. In that instant between shutting off the rest of the world and moving into her element, she felt as though she had a form of synesthesia, as the echoes of terror and elation from the dozens of pilots that occupied the cockpit over the centuries settled their mantle of responsibility on her skin. Goose bumps flared, and her heartbeat quickened. She stood at the event horizon between the two worlds for many long seconds before letting the euphoria pass, and she sidled past the bulk of the conn chair and settled into the seat. Though the interior was pitch black, she could be half dead and still walk through these motions more familiar than eating or breathing.

She reached forward to the console that wrapped nearly 180 degrees in front of her and tapped in the initiation protocols for the fusion reactor. Her chief had already started a warming sequence within minutes of the raid’s announcement, as a cold start could often take time they might not have. So her code simply brought it from a sleep state to awake. A Christmas tree of lights came to life as the Highlander’s heart pumped its power to every portion of the machine.

She snapped open a compartment on the side of her chair, and pulled out wires and med pads. She pulled the adhesive strip off each pad and firmly attached them to the inside of each thigh and arm. Then connector clips attached to each of the four medical monitors, and she strung the ends up through a loose loop of her cooling vest at her neck. She then reached up and to the right for the small shelf that held her neurohelmet. Pulling the heavy device down over her head, she settled the bulky item onto her shoulder pads, making sure she could see well. She then fished out the dangling cable ends and by feel socketed them into the part of the neurohelmet that rested against her chest. She then pulled another cable out of a self-winding slot in the other armrest and plugged it into her coolant vest, after which she synced the five-point restraining harness tight; she liked it tighter than most, as launching 90 tons in a heavy ballistic arc jostled more heavily than lighter ’Mechs did. 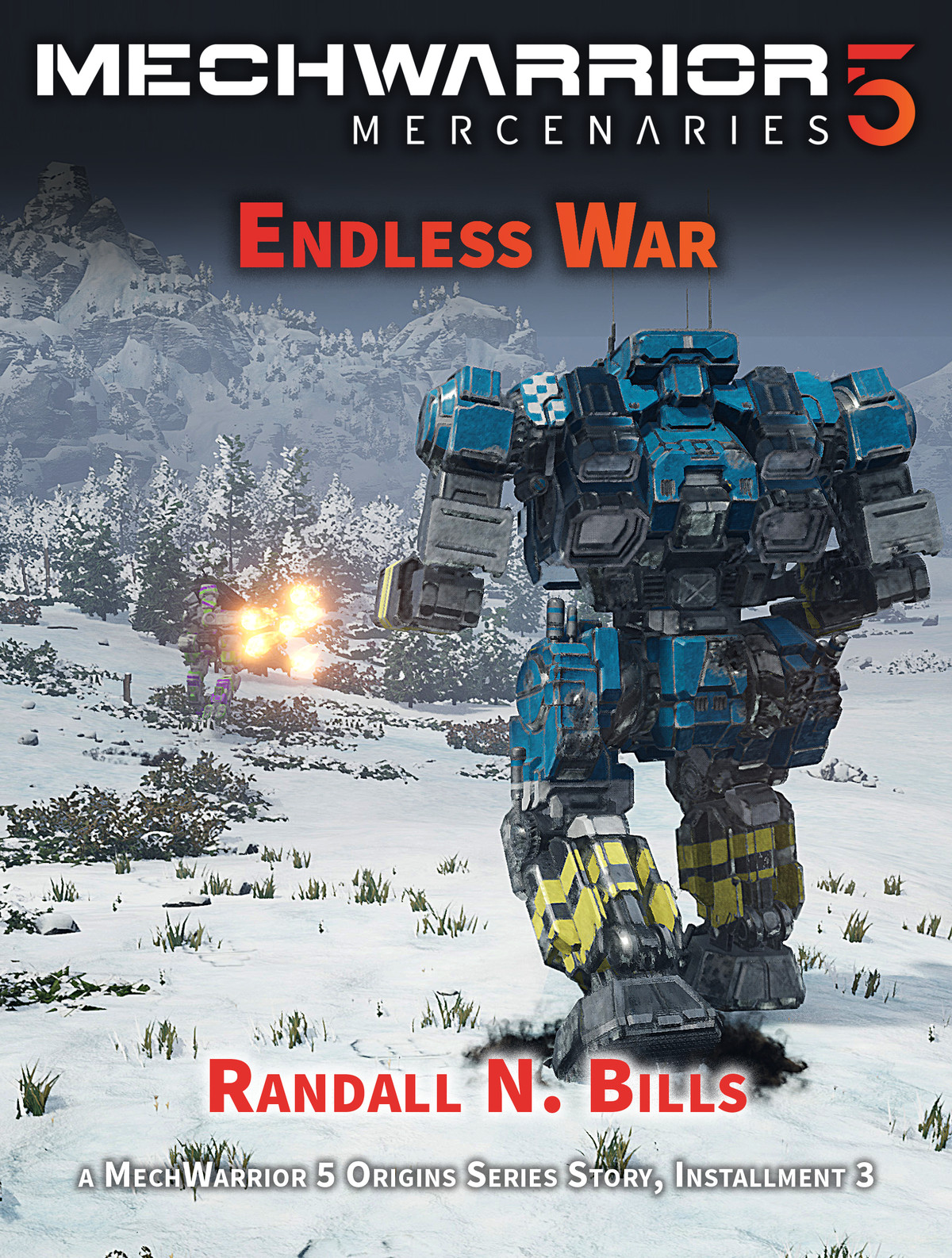 She then flipped a sequence of toggles, and her skin prickled as the numerous tubes of coolant jelly in her vest began cycling, ready to combat the deleterious heat of battle. Dizziness momentarily washed her senses as the neurohelmet came online and started syncing with the massive, three-ton gyro nestled just above the fusion reactor in the belly of her beast. She reached forward and keyed through two more sequences, carefully and methodically ticking off each item in the startup sequence and verifying all readouts before inviting another occupant to her party of solitude with a final flick of a switch.

“Voice authorization required,” the computer spoke. She knew a hundred warriors who customized the voice, from male to female, accent or none, and everything in between. She’d stayed with the original default it’d retained from the moment it walked off the assembly line and into the Star League Defense Force; it somehow seemed blasphemous to do otherwise.

“Cha togar m’ fhearg gun dìoladh,” she spoke softly. Her Scottish Gaelic, though not her native tongue, was still as good as the day she’d left the Northwind Highlanders to forge her own destiny, out from under the too-helping arms of her adopted parents. No one can harm me unpunished. She shouldn’t still be using a motto of the Highlanders regiments. One of the longest histories of any combat command in the Inner Sphere, stretching as it did back more than 1,500 years to Scottish Highlands regiments on ancient Terra; a legacy their modern descendants (both in blood and spirit) fiercely protected. She’d left, of her own accord. And they’d given her a grandiose honor in allowing her to take the Highlander that had been in the regiment for nearly four centuries; she was still breathless anytime she contemplated the gift. But she no longer had the right to that legacy. And she’d come to terms with that, especially as she walked down paths of her own making, finding a home in the storied Light Horse. Yet she couldn’t completely let go of her youth and the comfort it brought in these moments of solitude.

The birth of BattleTech

The previously locked joystick, throttle, and pedals unsealed under the correct verification protocols, and the rest of the banked machine came to life; fifteen meters of war-forged majesty moved at her command. A smile of savage joy blossomed; her hands and feet found their true extensions as the machine took a cumbersome step out of the berth and toward one more battle.

Randall N. Bills began his writing career in the adventure-gaming industry, where he has worked full-time for over two decades. He’s led the publication of literally hundreds of sourcebooks, rulebooks, boxed games, and more. This includes instrumental work on the seminal BattleTech and Shadowrun game lines; he was lore advisor on Harebrained Scheme’s BattleTech computer game, and is a co-story developer for Piranha Games’s forthcoming MechWarrior 5 computer game. His most recent game publications include the Dungeons & Dragons Dragonfire deckbuilder.