While working on Tekken 2 in 1995, the development team at Namco found itself in high demand. There were only so many people who had experience developing 3D fighting games at that point, after all, and games like Virtua Fighter and even Toshinden were exploding in popularity.

So, much of the Tekken team left, some forming a studio called DreamFactory and developing games such as Tobal No. 1 for Square.

One of those who stayed, Katsuhiro Harada, took over the franchise, gave himself the title “game director,” and went on to become not only the face of Tekken, but an executive overseeing large swaths of Bandai Namco’s lineup. 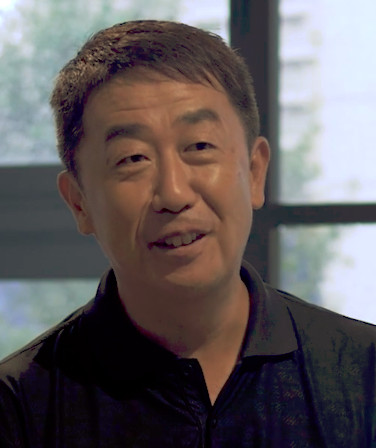 Yet another key staffer who stayed hasn’t gotten nearly as much attention. As the main programmer on the first three Tekken games, Masanori Yamada was one of the people responsible for making the early Tekken games run well in arcades — and run at all on PlayStation.

In a 2017 interview with Sony’s PlayStation Blog, Harada described Yamada as “a true genius in the 1980s and ’90s,” saying his work inspired PlayStation creator Ken Kutaragi.

Earlier today, Polygon posted Memories of Play, a documentary looking back on the original PlayStation for its 25th anniversary. For it, we recorded rare interviews with Yamada discussing the early days of Tekken and PlayStation, so we pulled together some of his best memories and anecdotes — some cut from the video — below.

As it turns out, pretty much everything related to Tekken in those days happened at the last minute.

The right place at the right time

Yamada started at Namco in 1988, and worked on a series of arcade games prior to Tekken. Those included a vertical shoot-’em-up called Dangerous Seed and a four-player fighting game called Knuckle Heads, as well as various canceled projects.

“None had really taken off,” he says.

In the early ’90s, Yamada volunteered to join a new arcade-focused development studio Namco was planning to open in San Jose, California. But when that job didn’t end up working out, he started looking at the new console hardware becoming available. First, he got his hands on a 3DO.

“I tested it out, but it wasn’t that great,” he says. “Then I heard a rumor something better was coming.”

That turned out to be Sony’s PlayStation, and Yamada was skeptical until he saw it in person. “When I saw the console itself, I thought people would fall in love with it,” he says.

Yamada spent time carrying his work PC from his office at Namco in Yokohama to Sony’s office in Aoyama every day in order to take notes and study the new hardware, then report back to his co-workers.

Around that same time, he says, Namco had an interest in developing a 3D fighting game similar to Virtua Fighter, and the timing lined up almost perfectly with Sony’s plans for the PlayStation.

One of Yamada’s earliest memories working on the hardware was taking a sample 3D model that an artist at Namco had made as a test — a version of Cammy from the Street Fighter series — and getting it to work on PlayStation. When the textures and level of detail held up, he knew the hardware was something special.

As he spent time with the hardware, Yamada says he made it a point to outperform his competitors — including early PlayStation fighter Battle Arena Toshinden and Namco’s own Ridge Racer, which was under development on the same floor next to Tekken. 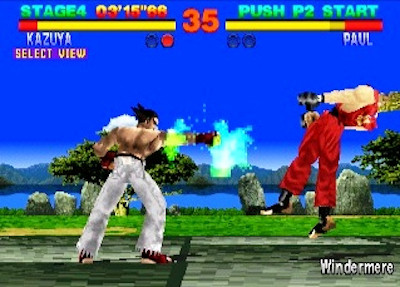 The biggest challenge, from Yamada’s perspective, was making the games fit into the PlayStation’s limited memory. While the arcade versions ran on modified PlayStation hardware, they used 4 MB of RAM, while the console versions had to fit into 2 MB.

“It was pretty fun,” he says, describing himself as “a bit masochistic” because he liked the challenge of working with limited memory. “I was literally living in the office, though.”

“At that point, we were all told not to go home without authorization, even on weekends,” he says. “When going home, I would say that I needed to go pick up new clothes,” he adds, “to which I would be asked if it wasn’t just to go sleep.”

Despite the conditions, Yamada says he enjoyed the work and is proud of the results, noting that he was able to discover extra space in the arcade version and compress it in a highly satisfying way.

“In the end it didn’t look so different, right?”

Running up against tight deadlines was a common theme in the early Tekken days.

In one case, Yamada tells a story about showing the original Tekken at the 1994 JAMMA arcade game convention in Japan, where Namco was putting the game head to head against Sega’s Virtua Fighter 2.

Sony and Namco were collaborating on the System 11 arcade hardware, a modified version of the PlayStation that wasn’t as powerful as some of its competitors — like Sega’s Model 2, which ran Virtua Fighter 2 — but was inexpensive and would make porting games to PlayStation a more straightforward process. Tekken was set to be the first game on the hardware.

As the latest version of the hardware arrived, Yamada was having trouble getting the game software to run. And shortly before the JAMMA show, Yamada says Kutaragi visited Namco and saw the game wasn’t working.

“He told me not to worry and that he would send an engineer that same day,” says Yamada. “He sent [SCEI hardware architect Masakazu] Suzuoki, who had just gotten married — he called his wife from a pay phone and told her that he would be late and that he would make it up to her. After that conversation, we stayed up all night. He had prepared four or five solutions to try to fix our issue; however. it didn’t go well at first. Then he had one last option, saying that if this didn’t work then he wouldn’t know what else to do. As he tried it, his voice was a bit shaky, telling me that he thought it worked. He asked me to try it out.” 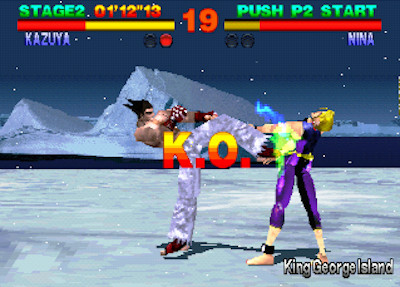 “Fortunately, the next day we had a Tekken that was running perfectly on the show floor. I still can’t help but think of Suzuoki as a god, and Kutaragi as well for sending him to us. I am very thankful.”

Suzuoki ended up in Tekken’s special thanks credits, just under Kutaragi.

In another case of working until the last minute, Yamada recalls a time when the development team had to drive a disc to Sony’s PlayStation manufacturing facility in the middle of the night — though he doesn’t recall whether it happened on Tekken 2 or Tekken 3.

“We waited until the very end — we were working on the game until the last few moments,” he says. “I remember bringing the game directly to the factory in Hamamatsu. We finished the game at night and had to get the final approval from QA. In the morning, we got the approval — it was maybe around 3 or 4 a.m., and someone in the company had been hiding a bottle of whisky and said we should drink. So we celebrated. Then our superior came in and asked us to take the game to the factory, so we got in a car and headed towards Hamamatsu. Maybe I’m not supposed to say this, but we had one passenger too many, who we had to put in the trunk as we were heading to Hamamatsu.

“We delivered the master and received the test disc — we checked if it worked and finally approved the production. I would not advise doing this nowadays since it’s dangerous. I’m surprised we were allowed to do that back in the day, and I’m happy it ended without any problems.”

Looking back on his work on the original PlayStation, Yamada — who still works for Bandai Namco — says he misses those days. Specifically, being in a position to work on something while it’s substantially changing an industry.

He speaks highly of Kutaragi, noting that when he had technical questions about PlayStation hardware, he was surprised that Kutaragi answered them personally, rather than funneling them through support staff.

“We all wondered what the deal was with that guy,” Yamada says.

“However, I think Kutaragi’s technical abilities were the reason they could release such advanced hardware at the time,” he adds.

Kutaragi meant a lot to Yamada — so much so that Yamada once heard a story that Kutaragi hated an original prototype PlayStation controller (that resembled a Super Nintendo controller) and threw it against a wall, breaking it — so Yamada kept one of Namco’s copies of that controller, sensing it was something historically important. He even brought that controller to one of our interview shoots for the documentary, though he didn’t want to show it on camera since he didn’t want to risk upsetting Sony. (Shuji Utsumi, a former Sony executive also present at the video shoot, remembers the story differently, and thinks former Sony chairman Norio Ohga was the one who broke the controller.)

“By chance, I got to work closely with PlayStation,” says Yamada. “I feel incredibly lucky. It was also incredibly fun. I’d love to work on something with that same level of challenge and innovation again. The fact that we can’t makes me a bit angry. It’s frustrating. I feel ashamed that things remain monotonous.”

“I think PlayStation changed the industry,” he says.