War never changes, but Fallout sure has.

Over the past 10 years, the Fallout franchise has received three entries: Fallout: New Vegas in 2010, Fallout 4 in 2015, and Fallout 76 in 2018. Those three games are the Christmas Carol-esque ghost trio of the Fallout franchise as a whole — a vision of the franchise’s past, a glimpse of a comfortable present, and then the threat of a grim future laid bare.

The Fallout series was a classic of the ’90s. There was one universally beloved older game, a slightly contentious if mostly popular sequel, and then … nothing. There were a couple of spinoff attempts from other studios, and then the series fell into relative obscurity until 2008’s Fallout 3.

While Fallout 3 ended up as a critical and commercial success, and drew heavily from the first two games for source material, it still wasn’t what many fans of the original Fallout titles had been hoping for. New Vegas was the cure for that ailment, crafted by many of the original Fallout developers who were now at Obsidian Entertainment.

Granted, the dialogue checks were simplistic and easily gamed, the animations were janky and the people were slightly horrifying, and the world was extremely brown. But all of that was saved by the fact that New Vegas is a damn fine role-playing game. Large chunks of New Vegas were repurposed from an abandoned Fallout 3 made by Interplay, a project code-named Van Buren. New Vegas borrows heavily from Van Buren, but it’s built atop Bethesda’s shooty, looty engine. 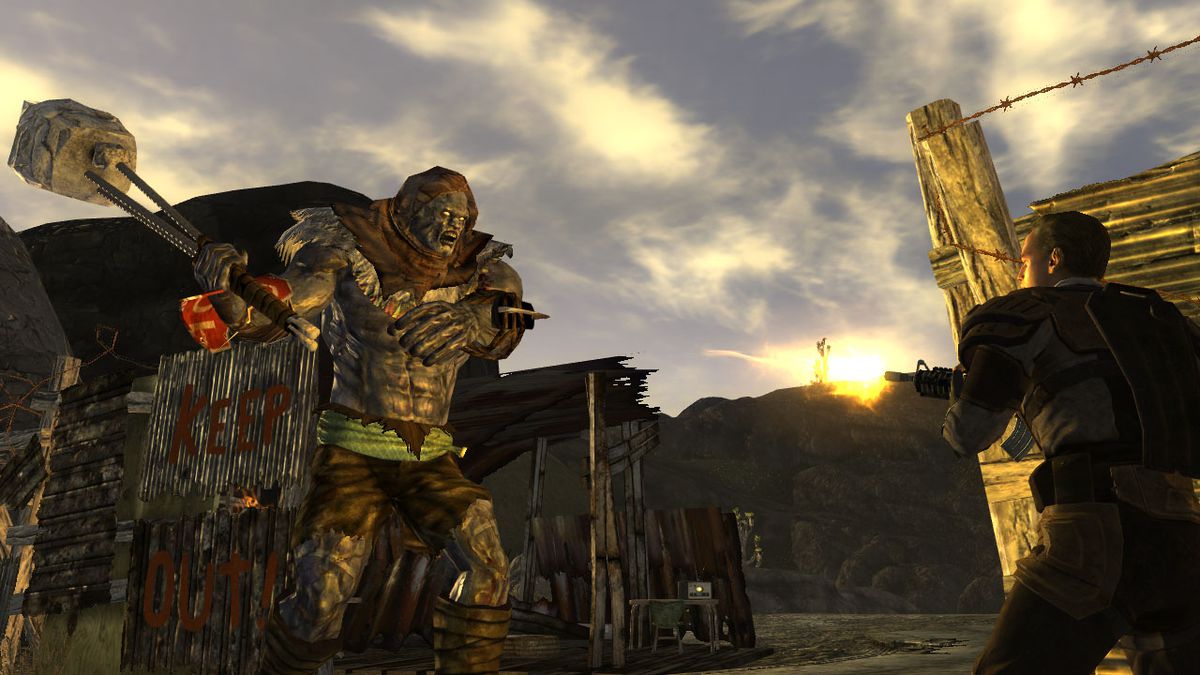 It wasn’t pretty, but New Vegas got the job done.
Obsidian Entertainment/Bethesda Softworks

New Vegas is a direct sequel to the original Fallout games, and the tiny town of Shady Sands that players encountered in the first Fallout is now a sprawling, struggling democracy. It’s as close as you’ll ever get to a vision of a benevolent rebirth of America — which is to say, well-intentioned but plagued by inaction, corruption, and dreams of conquest. The Brotherhood of Steel, a once terrifyingly advanced and stoic order, has decayed and is now on its last legs.

Meanwhile, Caesar’s Legion is a new force that draws from the now alien and inspiring imagery of the Roman Empire. It plans to control the new America through brute force and obedience.

Add in Mr. House, a prewar genius and libertarian idol, and this is Fallout at its most complex and nuanced. There are four final choices to make, with the player getting to choose from three factions (or a completely self-interested run) while deciding the fate of smaller groups in the wasteland along the way.

Obsidian’s vision of Nevada has stayed alive since New Vegas’ release thanks to mods, fans, and the sheer strength of its reputation.

Despite rumors and requests from fans over the years, Obsidian never took another swing at the Fallout universe. The closest thing we have to a New Vegas 2 is Obsidian’s The Outer Worlds. 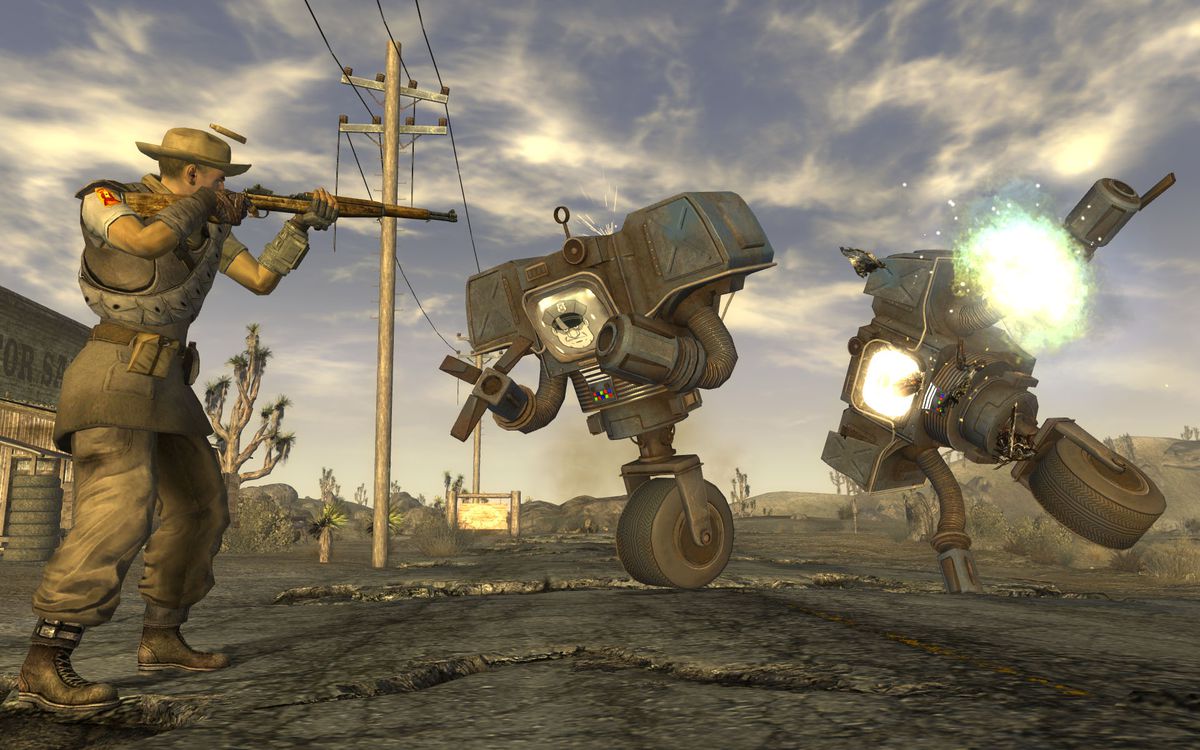 Fallout 4 was released in 2015, and it’s a massive slab of game. Ardent Fallout fans have many gripes with it: the fact that dialogue trees are cut down for a more simplistic system, the introduction of the ultra-advanced Institute, and the protagonist’s desperate hunt for a baby that many players simply didn’t care about.

But this is also Bethesda’s Fallout at its peak. There are unique story ideas here that weren’t cribbed from the original Fallout games, like the copycat synths running around. The companions are fantastic: Nick Valentine is a GOAT party member, Hancock is hilarious, Paladin Danse is my husband, and Piper is a fun archetype of the nosy reporter transplanted into the post-apocalypse.

There’s so much to do in Fallout 4 that it’s overwhelming and satisfying all at once. Settlement building! Exploring! Romances! Everything lacks the elegance of New Vegas, but the game makes up for it with size and scope. I’ve sunk a couple hundred hours into Fallout 4, and I’m confident I could put a couple hundred more into it. 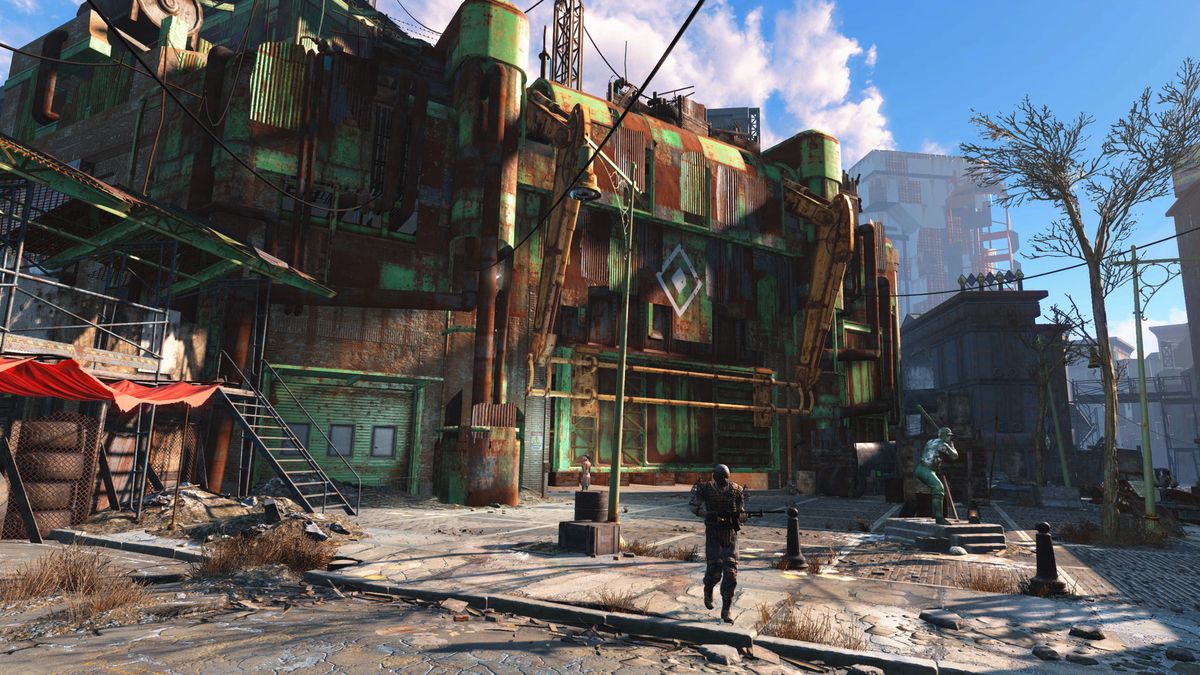 The new conversation options meant that role-playing was often limited to simple questions and declarative statements. The characters could still opine at length, but my ability to respond was constrained. Some of my favorite New Vegas conversations had flippant, silly responses from the Courier, but that wasn’t an option in Fallout 4.

I still managed to role-play out a satisfying character and story; I just had to do it in a more abstract sense. My character began to ask about her child, Shawn, less and less frequently. Instead, she focused on helping the Minutemen and spreading a kind of peace to the wasteland. When she was promoted to general, she took off her wedding ring and stopped asking about Shawn. She had a new life to focus on, not an old one to mourn and pursue.

Between Fallout 4 and the runaway success of Fallout Shelter — a cute mobile game where players manage their own Vault —- Bethesda had managed to make Fallout one of its most successful franchises. It was, for some, the brightest jewel in their crown.

This era of Fallout was successful, but it was also missing the nuance and thoughtfulness of past Fallout titles. The world of Fallout began to feel as much of a theme park as it did a coherent universe.

One example that seems small but is still cited to this day is the fact that in Fallout 4, you can find the drug Jet inside prewar Vaults. There is, in fact, a specific log showing orders for Jet; this isn’t just a random loot drop. Jet is also a drug that was invented in Fallout 2, on the West Coast, nearly 200 years after the Great War. The only reason for anyone in Fallout 4 to request Jet is that … well, Jet is something people remember and like from the original Fallout games. This could be read as a well-intentioned continuity error, but for many in the Fallout community, it’s seen as part of a larger trend: Bethesda mining an IP, taking the memorable moments and merchandise options, and leaving the rest behind. 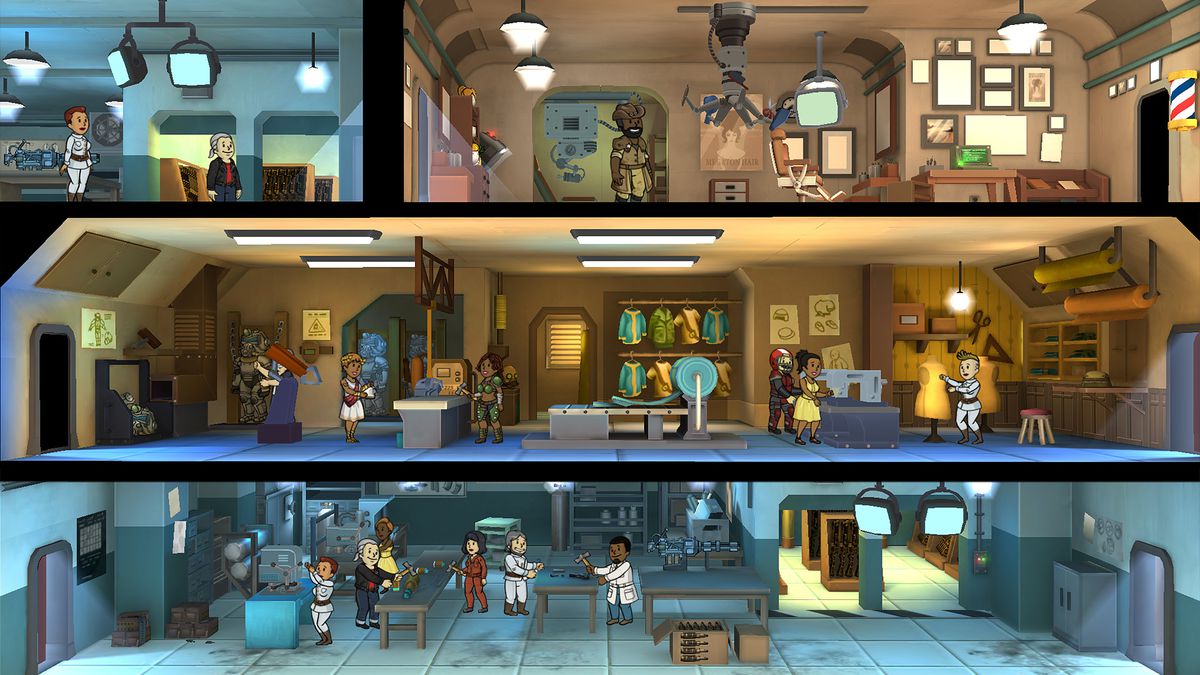 If Fallout 4 was controversial among Fallout fans, then Fallout 76 has been a grenade.

Fallout 76 is the ongoing, online version of the Fallout universe. It launched with no NPCs (beyond robots and one super mutant). Every person you met in the wasteland was another player.

The Fallout 76 launch was a disaster. The Power Armor edition of the game came with a canvas bag that turned out to be nylon, leading to a long bout of controversy until the bags were finally replaced. The game was riddled with bugs, with one player being permanently unable to die. Bethesda’s support site leaked customer information, players broke into a developer room and stole items, and oh — there was a massive duping problem that exacerbated all of those issues. Adding to the above, patches weren’t making the game better; they were destabilizing the already shaky base and introducing new bugs in the process.

All of this was bad enough to call the viability of the game into serious question.

But Fallout 76 managed to persevere. Dedicated players would stay in character, sharing their love of the Fallout universe through Brotherhood of Steel or Enclave role-play. Others created their own in-game content of raid bosses and endgame challenges. They even gathered up to eat their enemies.

Despite everything, Bethesda was able to build a core of Fallout 76 players who are profoundly loyal. The game’s long-term community seems completely detached from the social media furor that springs up around issues such as a subscription service or in-game microtransactions like a refrigerator. These strategies clearly work — paid items that add utility were the most popular section of the store, according to Bethesda — but they continue to kick up controversy around the game and alienate fans. 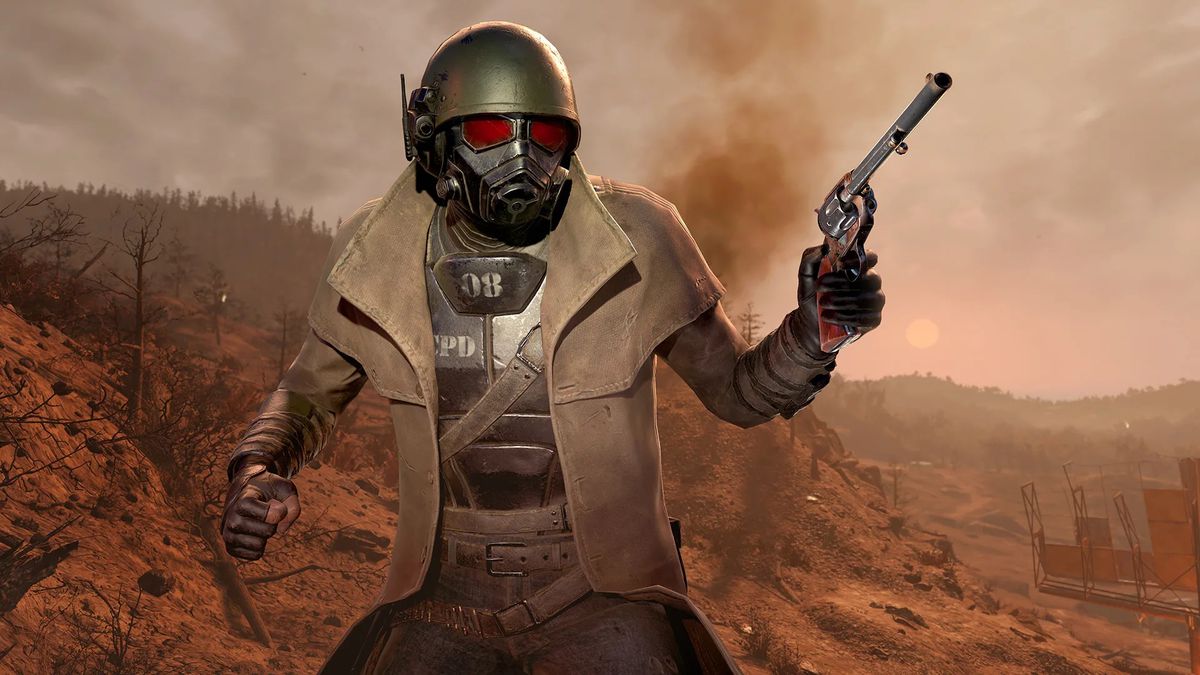 One of the most valuable rewards that Bethesda could offer its subscriber base was … the iconic NCR ranger outfit from New Vegas. The snake eats its own tail.

Fallout, as a franchise, is now in a precarious place. The prestige and draw of the brand is being weighed against Fallout 76’s reputation and monetization strategies. But Fallout 76 is also the sole representative of the franchise at the moment, and likely will be for some time. Obsidian just wrapped The Outer Worlds, which seems like the closest thing we will get to a New Vegas sequel. Bethesda is in the early stages of developing two mammoth games: Starfield and The Elder Scrolls 6.

We won’t see another full-fledged, stand-alone, single-player Fallout game for quite some time.

Looking back on the 2010s for Fallout is fascinating, but the next decade should prove to be thrilling as well. Fallout 76 needs to survive and evolve if it wants to keep the Fallout brand resting comfortably on its shoulders. There have been glimpses of a redemption arc along the way, but nothing is certain. This decade showed us three faces of Fallout, but the next may end up revealing the franchise’s true fate.