Yennefer and Geralt have finally had their meet-cute. We’re more than halfway through the season, so these characters had to come together eventually, but I don’t know if this episode offered up a satisfying way for these two to hook up. In fact, “Bottled Appetites” paints a rather unflattering picture of Yennefer, and I’m finding it a little hard to buy into her and Geralt having a torrid, romantic affair based on their first meeting. 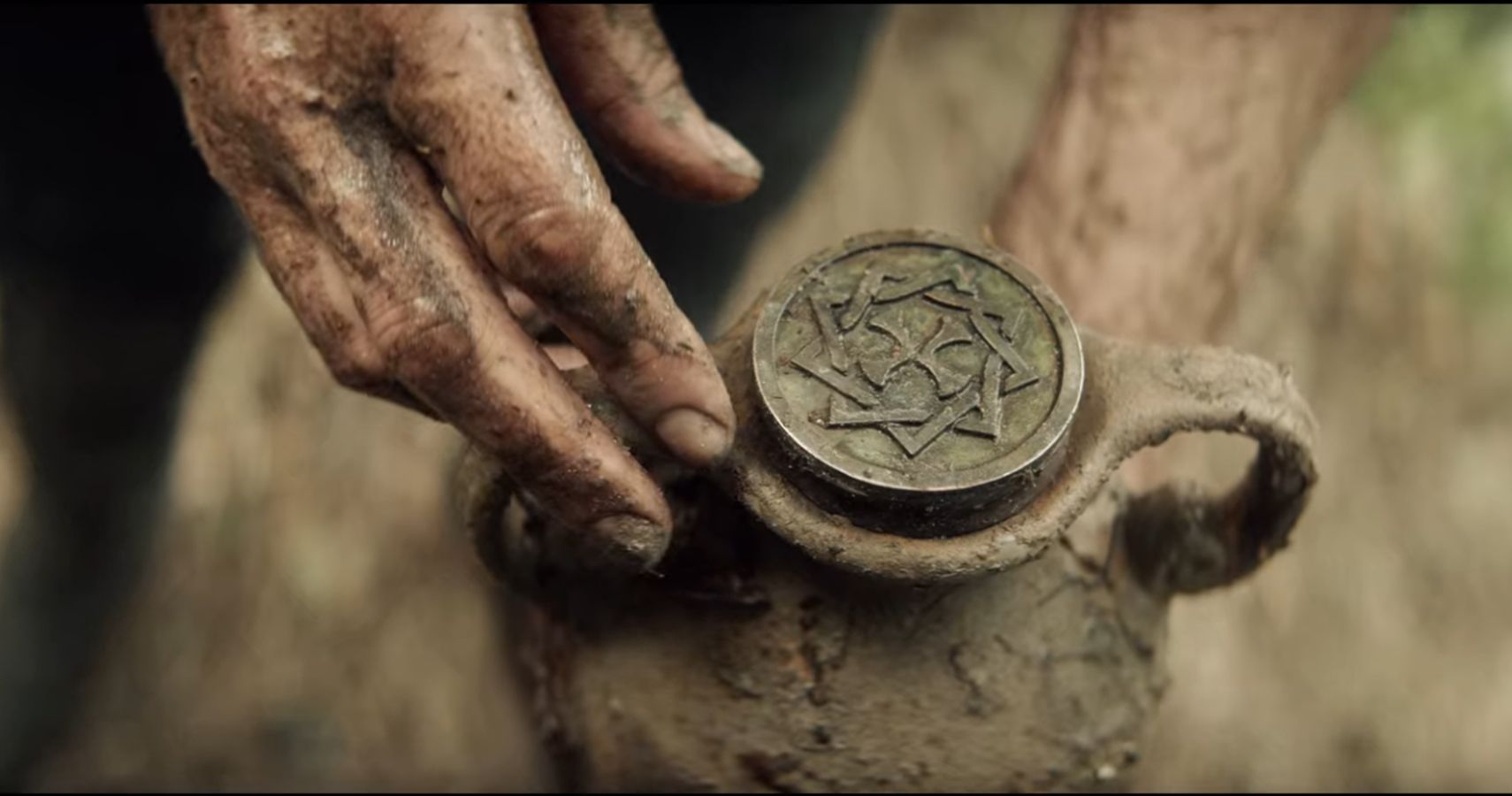 As we join Geralt, he’s desperately searching for a djinn so he can wish to cure his sudden insomnia. Jaskier randomly shows up and begins pestering Geralt as he’s wont to do. He brings up the fact that Ciri is now bound to him through the Law of Surprise, and his lack of sleep is likely due to that weighing heavily on his mind. Geralt does find the djinn’s bottle, but Jaskier grabs and breaks the bottle out of anger at Geralt’s moody behavior. Unfortunately, that’s a good way to get yourself magically poisoned, and Jaskier is soon coughing up blood.

Meanwhile, Yennefer has abandoned her post at Aedirn, and now sells spells as marital aids to desperate couples, which is not where I saw her career going. She’s been acting pretty strangely, and the reason is kind of lame: Yennefer wants a baby. She’s been searching across the entire continent for someone who can make her fertile again after she gave up her ability to bear children to get enchanted.

This is not only a rather rote “my biological clock is ticking!” plot development, but it also seems like a character choice for her that’s come out of nowhere. She’s previously expressed no interest in having children, now she’s impulsively putting together stupid plans because she’s become baby-crazy. It’s a disappointing path for Yennefer’s character.

As for Geralt, we get some of his best scenes ever in this episode, and Cavill is able to show off some excellent dry humor. “Bottled Appetites” is the best performance I’ve seen from Cavill as Geralt, as he gets a ton of good lines, we see his strained, witchery concern as he tries to save Jaskier, and his scenes with Yennefer crackle with good ol’ fashioned sexual tension. 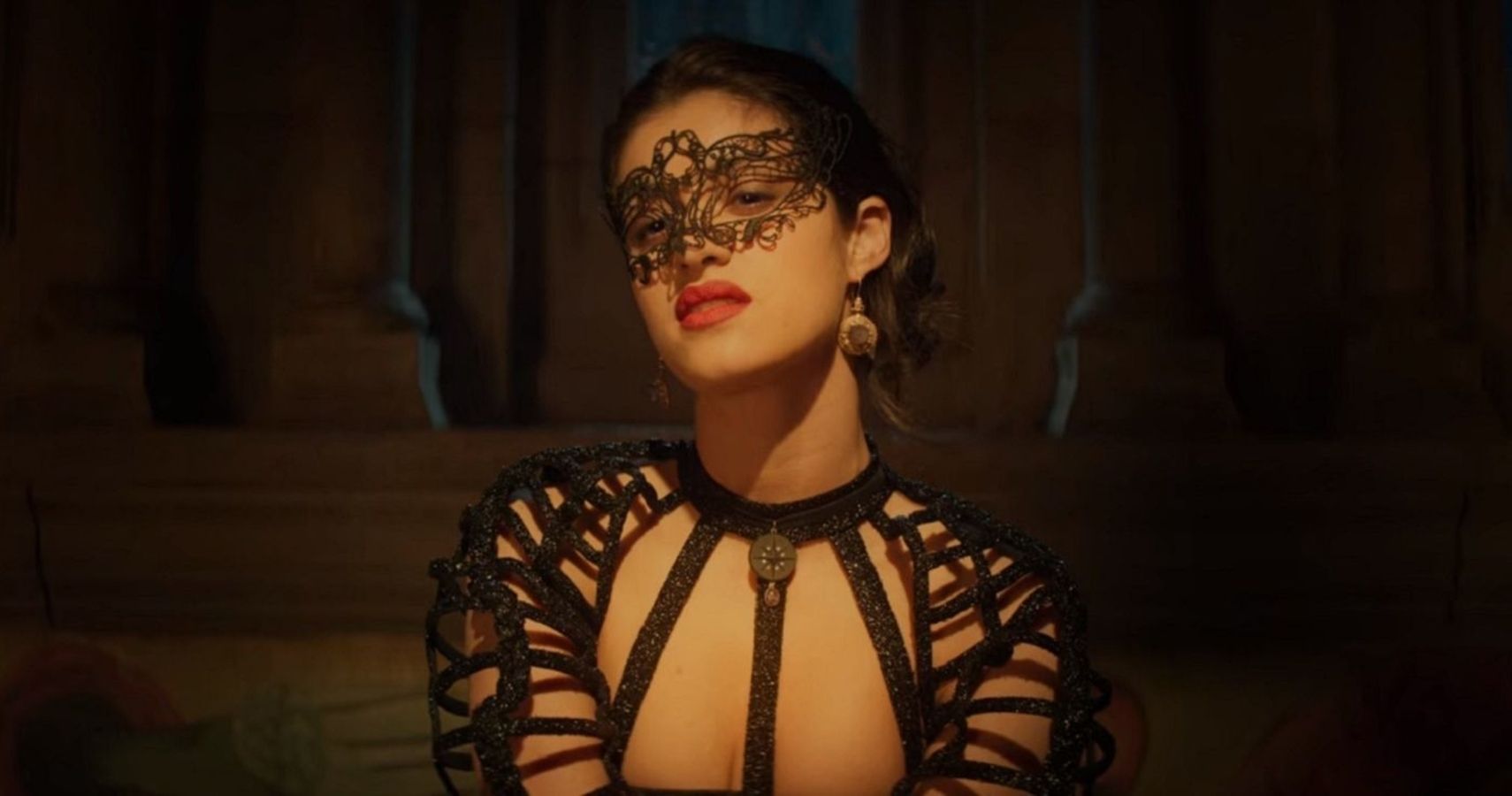 Going back to my point about Yennefer concocting impulsive, idiotic plans, her ulterior motive for curing Jaskier is that she wants to use her body as the djinn’s vessel. I assumed this was so she could wish for a baby, but the show says it’s because she wants more power. It’s moronic either way. Yennefer hypnotizes him using the scent of lilac and gooseberries, causing him to go on a light rampage that gets him arrested and locked up so she can begin the ritual without his interference.

Geralt eventually rushes in to save her from the djinn. It feels out of character for Geralt to care about her to the extent he does. Geralt is a man who does not like to be manipulated, so why would he save a woman who literally just manipulated and brainwashed him? She’s borderline evil and insane in this episode. She even shouts, “I want everything,” which is something a Disney villain would say.

It’s revealed that Geralt is the djinn’s true master, and he makes his last wish – which we don’t hear over the cacophony of Yen’s spell – and they wind up in another part of the mayor’s house where they bicker before immediately getting it on. Geralt then reveals to her that his plan worked, leaving Yennefer confused until she looks over to find that Geralt has finally gotten some sleep.

It’s a great punchline, but as for their relationship, other than the fact that these are two ridiculously, good-looking people, I don’t understand why either one of them would want to romance the other. We know that Yennefer isn’t evil, but from Geralt’s point of view, she comes across an unhinged maniac with magic powers. Turning Yennefer into an unstable character whose only desire is to have children seems so reductive. Maybe this is how they got together in the novels, but based on this show, it feels a little contrived. 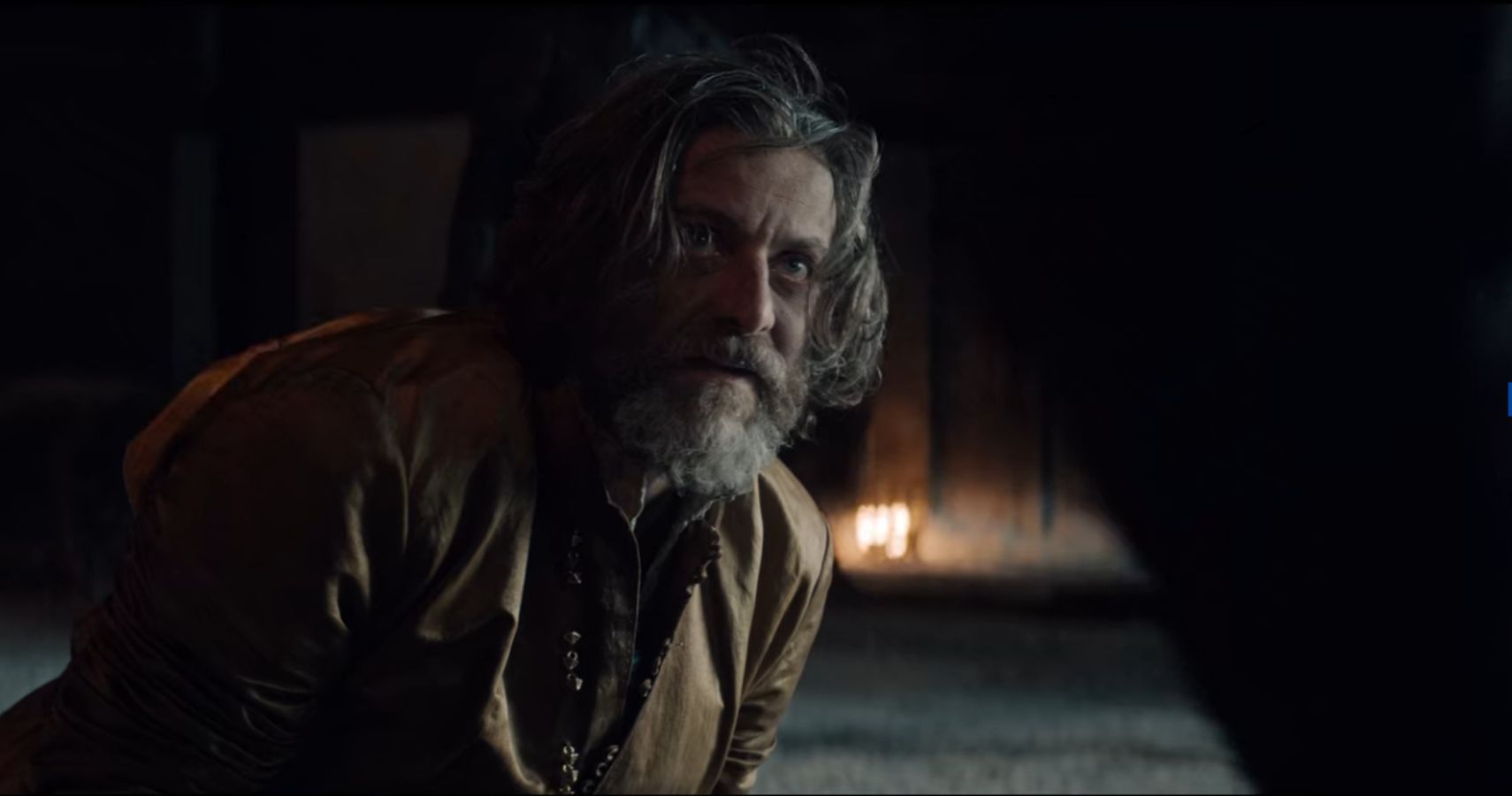 In the review for the previous episode, I made a big deal out of that talking tree that Ciri saw after drinking magic water because I thought that was going to be an important part of this episode. Boy, was I wrong. As far as I can tell, that isn’t brought up at all, and the dryads just agree to keep Ciri safe in the forest of Brokilon. They also go on about her destiny, and I’m starting to grow rather tired of that word.

The only interesting development involves poor, old Mousesack. One of Nilfgaard’s henchmen finds a doppler: a creature that can make itself look like any human being and take on their personality and memories. This doppler steals Mousesack’s identity and then proceeds to give him the slowest stabbing ever. He then heads over to Brokilon and lures Ciri away from safety so he can bring her to Nilfgaard. Even worse, Ciri – who has no idea what’s going on – drags Dara along with her and you just know things are going to go very badly for him.

I feel like revealing this plan so early was a mistake, as it might have made for a good twist later on. There is some value in hoping that Ciri will figure out that this isn’t Mousesack, but I’m worried that instead, it will be Dara who discovers that he’s a doppler and Ciri will just come across as an idiot when she defends her fake friend. At least it’s some kind of forward momentum for Ciri’s storyline, something that is desperately needed. Now, all we need is Freya Allan to be given something to do other than look scared or confused.

So, Where Are We Going? 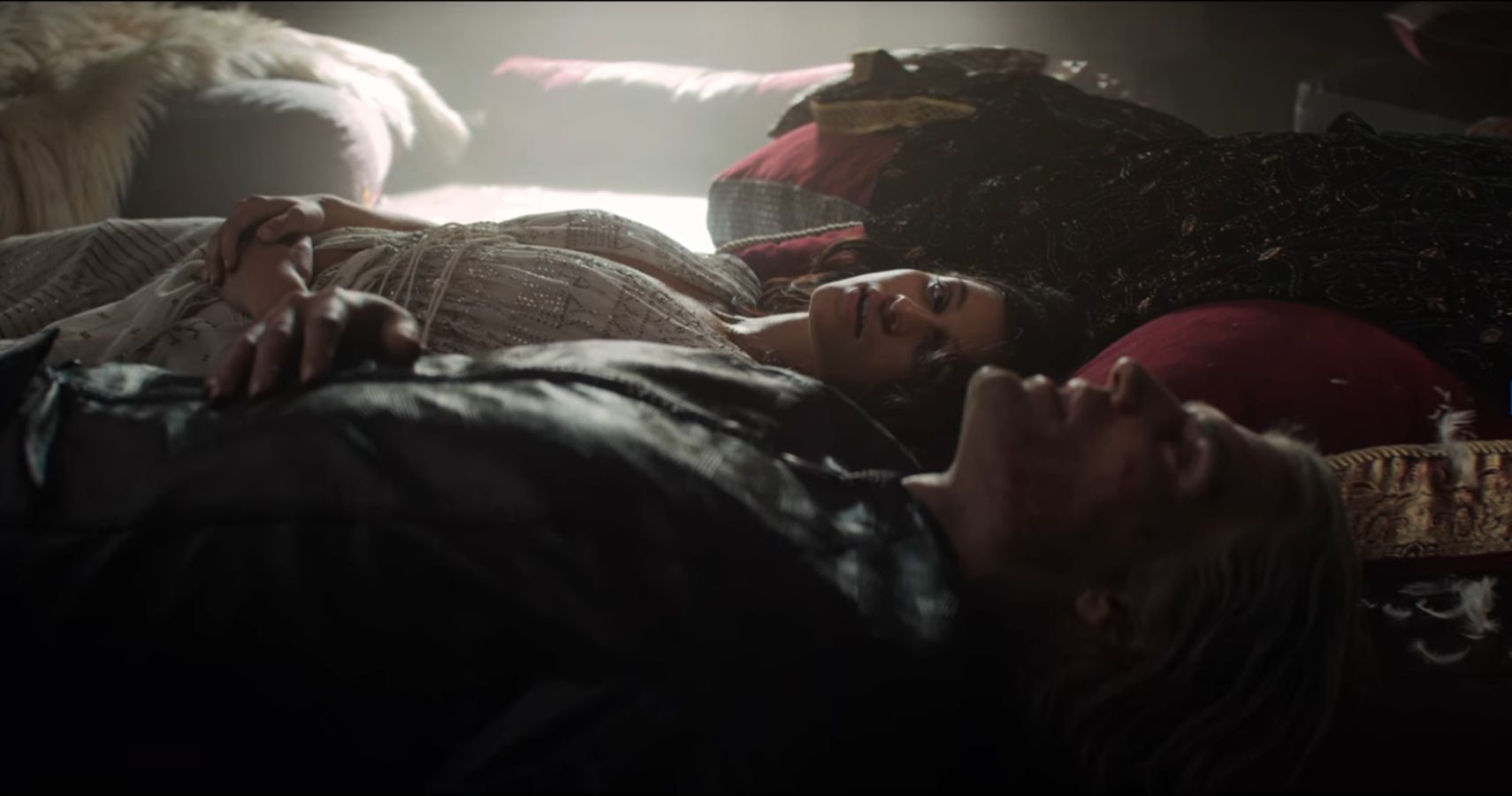 I find the continuous problem that I’m having with this show is it’s quite entertaining, but I’m not sure it’s going anywhere. It’s starting to feel like a really high-budget syndicated show like Hercules or Xena: Warrior Princess. Each episode has Geralt strolling into a town to fight the monster of the week, reoccurring side characters that pop in to say hello, then it all wraps up nicely and we move on to the next adventure. That wouldn’t be a bad thing if that’s all this series was, but the issue is that we have Ciri hanging out in the background constantly yammering on about destiny.

The Witcher is obviously building to things, but while the mythology and history of the world is expansive, its overarching plot is moving at a glacial pace. Until everyone finally forms a team and heads out on the big journey, everything that goes on in these episodes feels unimportant, like we’re just spinning our wheels until the show actually begins.