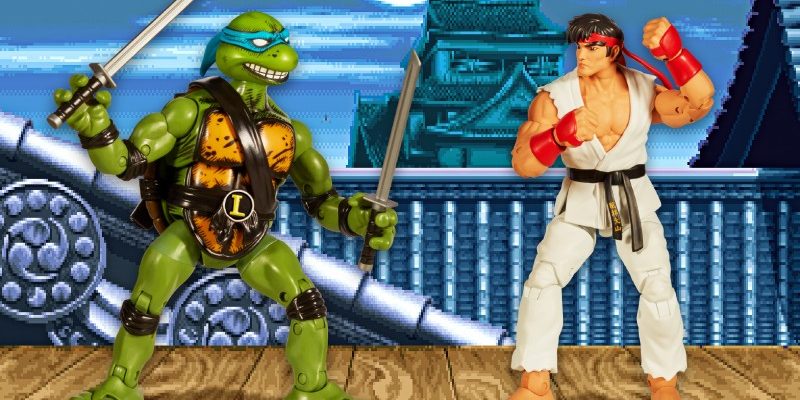 The four sets respectively are:

The two releasing this fall are Ryu vs. Leonardo and Chun-Li vs Michelangelo, and it is then that they’ll hit retail shelves. Unfortunately, as you can see above, those are the only two sets with images so far. As for where, Playmates Toys doesn’t say in today’s news, but it’s likely they’ll end up where Playmates Toys figures are typically sold near you.

“Each figure in the collection stands six inches tall and is highly poseable with multiple points of articulation – from ball joints at the head, shoulders and hips, to split joint elbows and knees, and at the wrist, ankles, upper arms, and thighs,” a press release reads. “Authentically detailed and decorated as seen in the Street Fighter II video game, Street Fighter vs. Teenage Mutant Ninja Turtles is packed out in an ‘80s video game console-shaped window box packaging.”

This collection, which encompasses four SF vs. TMNT faceoffs, was created in celebration of Street Fighter’s 35th Anniversary, which is this year.

What SF vs. TMNT matchups would you like to see? Let us know in the comments below!