Eivor, the protagonist of Assassin’s Creed Valhalla, is a woman. The game allows you to play as a male version of the character, a female version, or a strange Animus mix of both, but none of this matters. She is a woman, underneath it all. Despite Ubisoft telling us pre-release that both genders were canon because of Assassin’s Creed’s unique lore, a late-game twist confirms that actually, Eivor is a woman. This is a familiar tale at Ubisoft, and as Far Cry 6 approaches, it’s starting to get old.

Prior to the release of Valhalla, all of the marketing involved the male version of the character. He featured in the earliest trailers, he got the box art, and there were even two Funko figures released; male Eivor with one axe, and male Eivor with two axes. You know, the two genders. Now that Eivor’s gender has been confirmed – despite the straight up lie that both genders are canon – it’s female Eivor who fronts the upcoming comic book. Everything prior to release is marketing, and so male characters must dominate because boys don’t want to play games with icky girls in case they get cooties. That’s why Tomb Raider, Horizon, Metroid, and The Last of Us bombed, right?

The Assassin’s Creed franchise has done this before. We know, from stories from devs, that the team had to fight to get Evie Frye in Syndicate – the most under-appreciated game in the franchise, but that’s another story. Evie is playable alongside her twin brother Jacob, and you can play as either for the majority of the game, with a few select missions belonging to one twin specifically. Aside from spin offs (like Aveline de Grandpre in Liberation), this made Evie the first playable female assassin.

Still, the spotlight was shared with Jacob to limit the amount of cooties present. This was followed by even more half measures, many reportedly brought about because of studio interference. Bayek’s wife Aya, rather than Bayek himself, was initially written as the star of Origins. Likewise, Kassandra was supposed to lead Odyssey alone, before Alexios was brought in as a cootie killer. I have no idea if the same happened in Valhalla, but I suspect it did.

I also have no idea if the same happened with Far Cry 6, but I suspect it did. In the upcoming title, you play as Dani Rojas, who can be male or female. Over on the official Far Cry 6 social media though, female Dani is the star. As the game gets closer to release, we may see the two versions share the spotlight, but it’s telling that female Dani is the lead-off hitter in the wake of the previews. If female Dani is the ‘true Dani’, as female Eivor was, as Kassandra was, and as Aya was supposed to be, it should be her game alone.

Giving us a character that is two characters in one will always dilute them. Female Eivor – the real Eivor – constantly looks slightly janky, because the mocap was done primarily by the male actor and then tweaked to fit her frame. That a character must be two genders in one colours their relationships with other characters too – it’s impossible to write a female friendship, two bros, or build flirtatious chemistry when one half of the relationships could be either gender. Even Mass Effect’s Commander Shepard, one of the most popular versions of this gender choice trope, has their most intimate, character building moments in the gender-locked romance scenes. Immortals Fenyx Rising also saw you choose between genders. Far Cry: New Dawn did the same. Ditto The Division 2. Watch Dogs: Legion gets a bit of a pass since the whole point is to play as a collective, but there’s still a clear pattern. In Ubisoft games, you either play as a man, or you choose your gender. That wouldn’t be so bad if it wasn’t for the fact that Ubisoft’s female protagonists are so fantastic, even with their wings clipped.

Ubisoft is not the only major studio that seems terrified that boys will think their game is just a Barbie dress-up simulator if their character can’t have a theoretical digital penis. But it’s most frustrating with Ubisoft because their female characters are so interesting despite the limitations placed upon them, and their male characters are so… not. Remember Alexios? Yeah, me neither.

I don’t think Ubisoft has ever had a better protagonist than Ezio Auditore da Firenze, and it’s no accident that he had three games in which to develop, and never had to make compromises to his character. I’m not saying every Ubisoft game from now on needs to give us Girl Ezio. I’m not even saying a single one of them does – that each Assassin’s Creed and Far Cry game is a soft reboot in a new locale with new characters and requires little prior knowledge aside from a collection of lore-heavy scenes is a positive. Both franchises have the ability to constantly evolve. But constantly offering different gendered characters has become too restrictive. 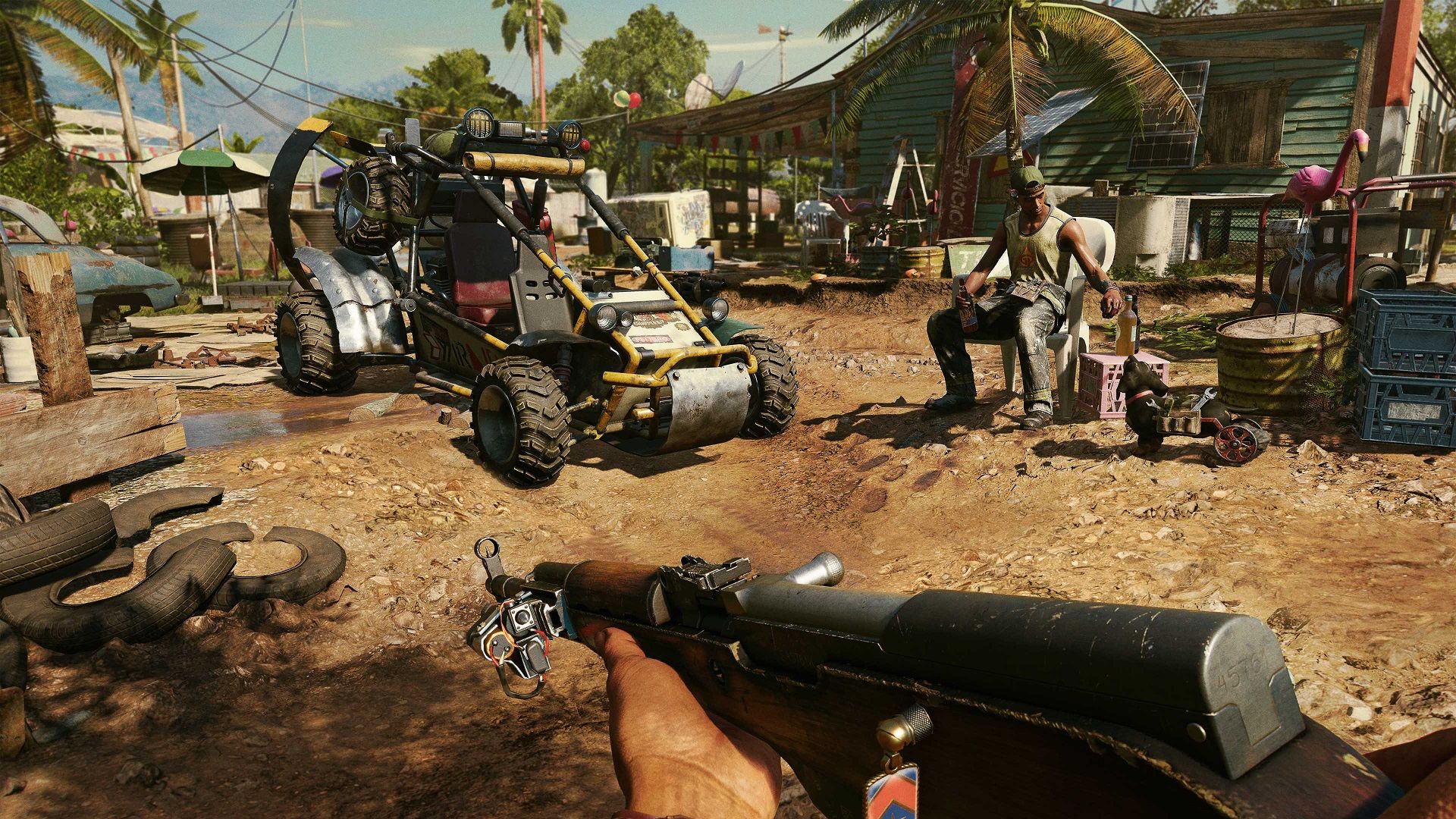 At first, it was progress. Evie, the first main game playable assassin, needed to fight for her place. That the progress came by inches doesn’t need to be retroactively criticised – that serves nobody. But Dani Rojas has fallen into the same trap as Eivor did, and regardless of whether a female Dani is canon or if both genders are, it feels like the time for compromise is over. Not every game needs to have a female protagonist; many games work brilliantly with purpose written male characters. Red Dead Redemption 2, Yakuza: Like A Dragon, Persona 5, Spider-Man, and Final Fantasy 7 Remake are amongst my favourite games of the past few years – all of them insisting you play as a pre-written male character. After seeing Ubisoft create compelling female characters despite tying them up in marketing knots, I’m desperate for them to commit and write a game for a female protagonist alone. Guess I’ll just wait for Beyond Good & Evil 2, we should get news on that any day now, right?