After nearly an hour of playing Watch Dogs: Legion, I’ve recruited just one NPC into the resistance, while losing two to permadeath. I’ve hacked countless phones, performed a dozen non-lethal takedowns and half as many lethal ones. I’ve dropped explosives on unsuspecting targets using a drone I was surfing on. I’ve bought many stylish jackets.

I didn’t play with Helen, the foul-mouthed retired assassin grandmother, a fact I have come to regret.

The new entry, set in a near-futuristic London, adds an ambitious new trick by making every NPC a potential playable character — as a potential recruit into the resistance. As Creative Director Clint Hocking puts it in a pre-demo presentation, “Anyone in the entire population can be recruited into your team.”

My demo begins at a small pub near Westminister. There’s maybe a dozen or so people spread across two rooms, grouped off in various chats. The Ubisoft rep walking me through the demo says that I can pick anyone to recruit from the bar — or I can go outside and find someone on the street. That process begins with profiling, an all-too-familiar part of Watch Dogs where you one-button “hack” into bystanders’ phones and get a name, a one-line bio, and a more game mechanics-focused ability bonus should you unlock them. Any NPC can be marked for unlocking later, which involves completing an origin mission that results in them being recruited into the cause.

After mulling over it a bit too long, I decide to recruit the bartender, a process which begins with us meeting in a back alley and offering to help erase something from a server. So I hijack a car and drive to a nearby police station to begin the first quest. (As this is semi-futuristic London, many of the cars on the road are autonomous, which for whatever reason makes me feel a bit better about hijacking them and a bit worse when I accidentally hijack a car with a human driver. At the same time, I feel like autonomous cars were a lot more likely to run into me when I crossed streets.) 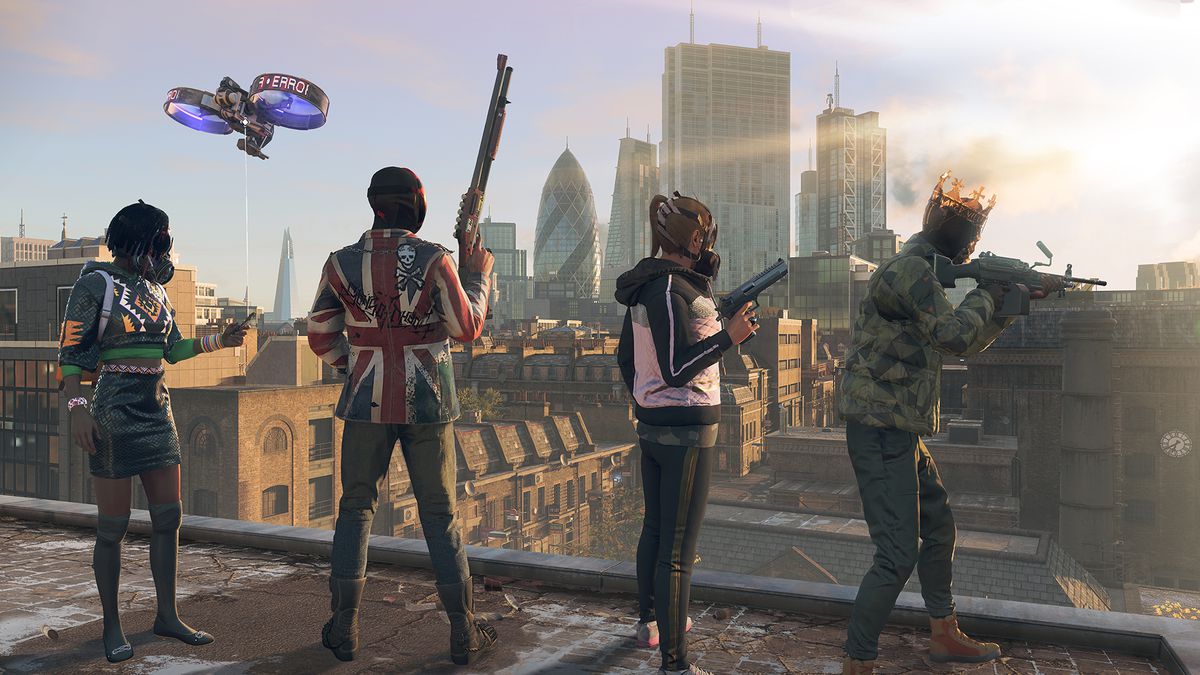 While multiplayer wasn’t shown during the event, Hocking did confirm that online multiplayer would be a part of Watch Dogs Legion. All he would say is that four players would be able to do co-op missions and show off their recruited characters.

From outside the “restricted zone,” I’m able to bounce from security camera to security camera, much in the way previous Watch Dogs games have allowed, to get a feel for the surroundings. The server in question is second floor and must be accessed in person (of course). “Hacking” a security guard gets me a copy of his ID card to use and unlock several doors. My first attempt ends far too quickly as I opt to punch out a security guard within the purview of three others.

As Hocking noted in the presentation before my hands-on, if you stick to melee, many of your adversaries will do the same. So rather than escalating, this group of guards instead sticks to punching and kicking. That is, until I press the wrong button and accidentally pull out a gun. Though half of the weapons in the game are non-lethal — and indeed, one of my weapons was set to shock — that was the moment when the police force did the same, and very quickly I was down for the count.

Death in Watch Dogs: Legion is permanent, but you do have a moment to decide. When my character hits zero, I quickly have two choices I can make: surrender or make a run for it. If I surrender, I lose that character temporarily — jail, hospital, whatever — but they ultimately live to fight another day. I chose to run, and while in other parts of the demo that results in my successfully escaping, here, I wasn’t so lucky. 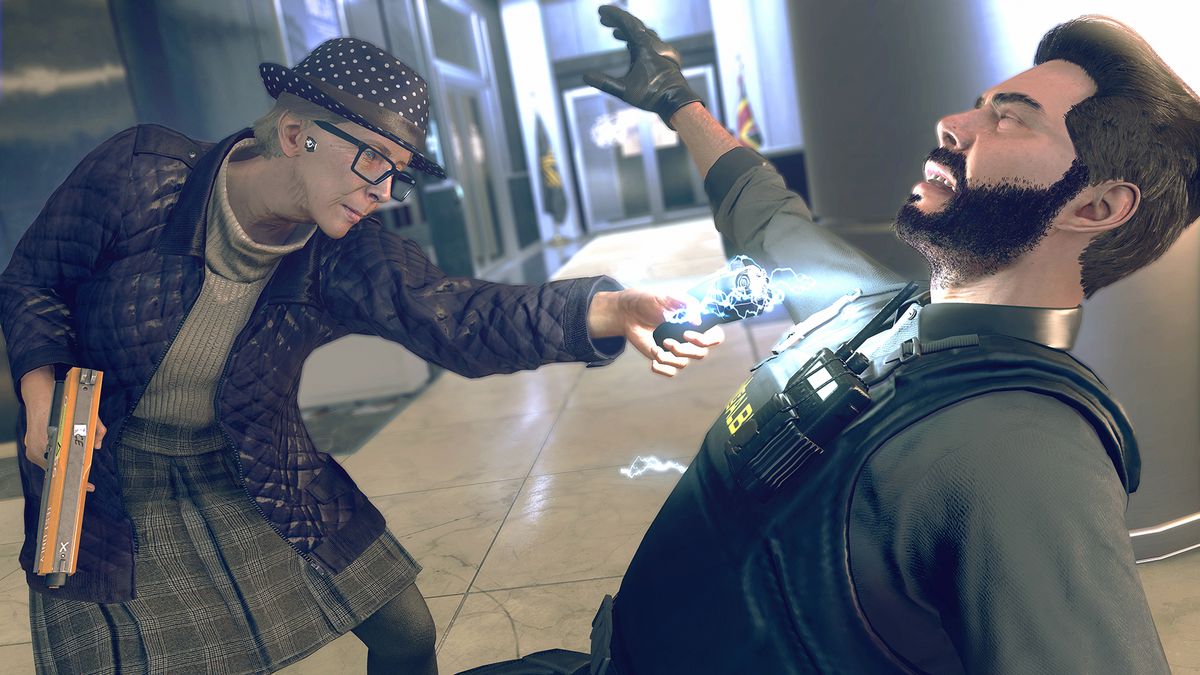 Thankfully, I had other characters available that I could use in place of my now-deceased protagonist. (The Ubisoft representative would not say what happens if you lose all characters, nor would they talk about who the “original” character is when the game begins.) I chose an elderly hacker who could walk at a snail’s pace, and then after about a minute I swap for a new character with a bit more mobility. (Like I said, I have regrets.) Character switching is pretty quick. The only consequence I saw was a loading screen.

The mission begins anew. Hack cameras. Scan the ID. This time I find a second-floor door in an alley that happens to be right next to the server room. This attempt is a lot more successful. I return to the pub, inform the recruit, and now I have a new playable character.

At this point, I decide what the recruit’s class (i.e. their specialty) is as well as what sub-class perk they get. The classes in question include:

I go with hacker class, and switch to the bartender as my new go-to character. I stop at a nearby clothing store — one of me — and from outside its doors buy a new long jacket. The first story mission is far enough that, instead of driving, this time I fast travel (presented in-game as London metro stops). I’m supposed to neutralize three targets. I sneak into a restricted zone (which is where your character dons a mask / helmet to obscure their identity) and use my spider-bot to look around. I forget to factor in patrolling security forces, and by the time I realize I need to switch back to my character, I’m already in an unwinnable situation. I choose to run for it. It doesn’t work. That’s one more resistance fighter that will never again star in a cutscene.

Character number three. I go the cheap way out. Staying outside the restricted zone, I hijack a large carrier drone, pick up conveniently placed explosive crates, and drop them onto my targets. I then fly it down to my character, jump on top, and surf away to the rest of the demo. 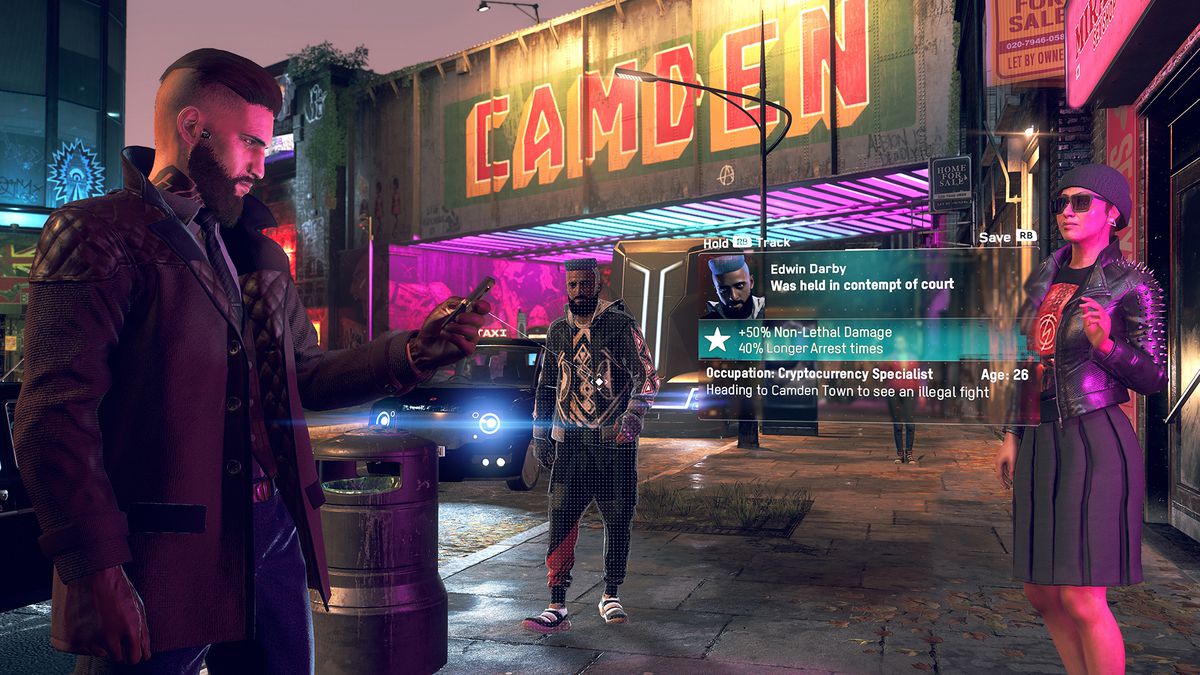 The Watch Dogs: Legion demo I played felt largely realized, despite the alpha build label. That’s not too surprising — after all, the gameplay itself feels very much like the other Watch Dogs games, and beyond that, Ubisoft games have a strong record for solid open-world experiences.

What’s new here, rather, is the conceit of being able to play as anyone, and during my time with Watch Dogs: Legion, I was only able to recruit one character and see just a handful of cutscenes. Looking ahead, what does it narratively to write the game’s story — Hocking noted five main storylines and over 60 missions — when virtually any character, with myriad different backgrounds, can be the main POV for any cutscene? When every cutscene can have a different protagonist? Even logistically, what does it mean to have so many characters that demand a variety of unique voices? The Ubisoft representative wouldn’t say how many voice actors were involved but did mention modulation as a way to expand the full voice lineup.

Those are questions that arguably can’t be answered until the final game’s release. Watch Dogs: Legion is an ambitious evolution of the franchise, and if Ubisoft pulls it off, it’s going to make for a pretty interesting discussion. Or at least a great drone surfing simulator.