If you’re a fan of The Witcher, you’ll probably already know that season two of Netflix’s blockbuster fantasy series is gearing up to adapt Blood of Elves, the first novel in Andrzej Sapkowski’s iconic Witcher saga. Season one primarily focused on The Last Wish and Sword of Destiny, a pair of short story collections that take place before the main sequence of novels. A couple of stories didn’t make the cut and will be resurrected for season two – we know Kristofer Hivju of Game of Thrones fame will be playing Nivellen, for example – but we’re mainly moving into main saga territory now, as evidenced by photos of Ciri on the set of Kaer Morhen. This explains the recent news that the Wild Hunt were spotted filming in Devon, England – well, sort of. I actually think the Wild Hunt’s addition to the series this early is a bit silly, especially when you look at that god-awful get-up.

For those unfamiliar with the finer details of The Witcher, the Wild Hunt are a race of spectral elves who ride through alternate dimensions on skeletal steeds. They hail from a fabled land called Tir na Lia, which is roughly based on Tir na nÓg from Irish mythology – a weird liminal space where people never grow old. The reason they come into the story is tied to their pursuit of Ciri, who possesses the Elder Blood of her ancestor, Lara Dorren. The issue is that the vast majority of the Wild Hunt’s narrative happens in The Witcher 3, which transpires several years after Blood of Elves. The Hunt are in A Time of Contempt, sure, which is the second novel in the saga – but only briefly. Also, I’m unsure season one did enough preliminary character-building to justify their presence in season two. I’m also not very happy with how they look. Costume design was a real strong suit in season one – think of the Lodge’s ball after Yennefer becomes a fully fledged sorceress – but this gear looks like it was designed for a bunch of Star Wars extras.

Let’s get one thing straight: each general of the Wild Hunt has their own uniquely uncanny armor. Eredin’s helmet is terrifyingly imposing with its face-covering skull plate, while the spikes protruding from the top form a makeshift crown for the King of the Wild Hunt. Imlerith’s helmet is smooth to the extent that he looks faceless – monstrous, even. Caranthir and Nithral have slightly less aggressive designs, but their stature and demeanor are far calmer – they’re scarier specifically because of their more refined looks. We never see Ge’els or Geralt’s helmets, but we know for a fact they’d be just as inspired as the rest. What’s this lad got covering his head, though? Some kind of claw? That’s not scary, it’s impractical. I know I’m going off the games here, but the Hunt’s armor is barely described at all in the books, aside from the fact that it’s all rusty. Given that it’s one of the more stylish aspects of the games, toning it down to something worse for the sake of it seems a bit silly.

I like the horses – their armor is great and I can imagine there’ll be some CGI magic worked in to reverse their skeletons. Still, I can’t see how any of these could call themselves members of the Dearg Ruadhri, Eredin Bréacc Glas’ feared and revered Red Riders. This is a cavalcade that is supposed to strike fear into the hearts of even witchers – at the moment they look like they’ve missed a turn to the circus. 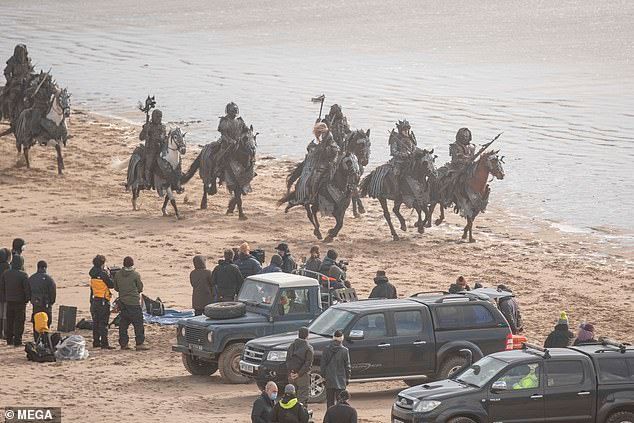 If you’re wondering what the Wild Hunt does in season two, here’s the passage from a Time of Contempt where they chase after Ciri:

“The ghastly cavalcade turns and hurtles straight at her. The hooves of the spectral horses stir up the glow of the will o’ the wisps suspended above the swamps. At the head of the cavalcade gallops the King of the Wild Hunt. A rusty helmet sways above his skull-like face, its gaping eye sockets burning with a livid flame. A ragged cloak flutters. A necklace, as empty as an old peapod, rattles against the rusty cuirass, a necklace which, it is said, once contained precious stones, which fell out during the frenzied chase across the heavens. And became stars…”

So we haven’t got Eredin in his Witcher 3 form here, but the armor in the pictures doesn’t look rusty either. This skull-like face in the novel is custom plate armor, not his actual skin – he’s an Aen Elle, meaning he has a relatively fair and youthful visage, as opposed to some bony skeleton like the horses he rides.

It’s just strange to me. The Red Riders play such a minimal role in the books that I can’t quite understand why they need to be brought into the show so quickly, unless there’s another time skip on the way like at the start of season one. Either that or it’s an Easter egg for fans of the game, but in that case why not make them look the same, or at least similar? Eredin himself barely even has anything to say in the books until chapter five of the last one, The Lady of the Lake, in which he says to Ciri:

“For centuries, people have been kidnapped, snatched by riders, by the Wild Hunt. Abducted, exploited and then thrown away like an empty shell once consumed. But do not expect to be that lucky, Zireael. You will die here, you will not see the graves of your friends.”

I know they need to build up to that scene, and adaptation often calls for changes, but it all just seems so arbitrary right now. We’re about five seasons away from that, at least. I love season one of The Witcher and I love Sapkowki’s books, but I’m just not feeling introducing the Wild Hunt this early, especially when they look so disappointing. Also, the Hunt aren’t even supposed to have physical forms here – they could only project spectral versions of themselves into the world at this point. It’s not until The Witcher 3 or just before it that they can physically manifest on The Continent, which is only thanks to Navigators like Caranthir, the boss you fight in Skellige who’s about ten times harder than Eredin himself. Anyway, I reckon this all looks a bit messy, but I’m willing to be – and I hope I am – proved wrong. Season one took some creative liberties with the source material and managed to justify all of them, so I’m really hoping the writers are able to pull off some magic again this time around.

Next: The Best Animals In Monster Hunter Rise Are The Ones You Don’t Kill