If you like Metroidvanias, the matchup here might surprise you. Bloodstained: Ritual of the Night was spearheaded by Koji Igarashi, the man formerly responsible for the Castlevania series for which the whole genre was (partially) named. While it may be true that few people know more about Metroidvanias than him, Touhou Luna Nights has the edge in all things style, as well as the staying power behind the ultra-popular Touhou Project. We’ll be taking a look at the two games in several categories to figure out which can emerge from the endless night unscathed. 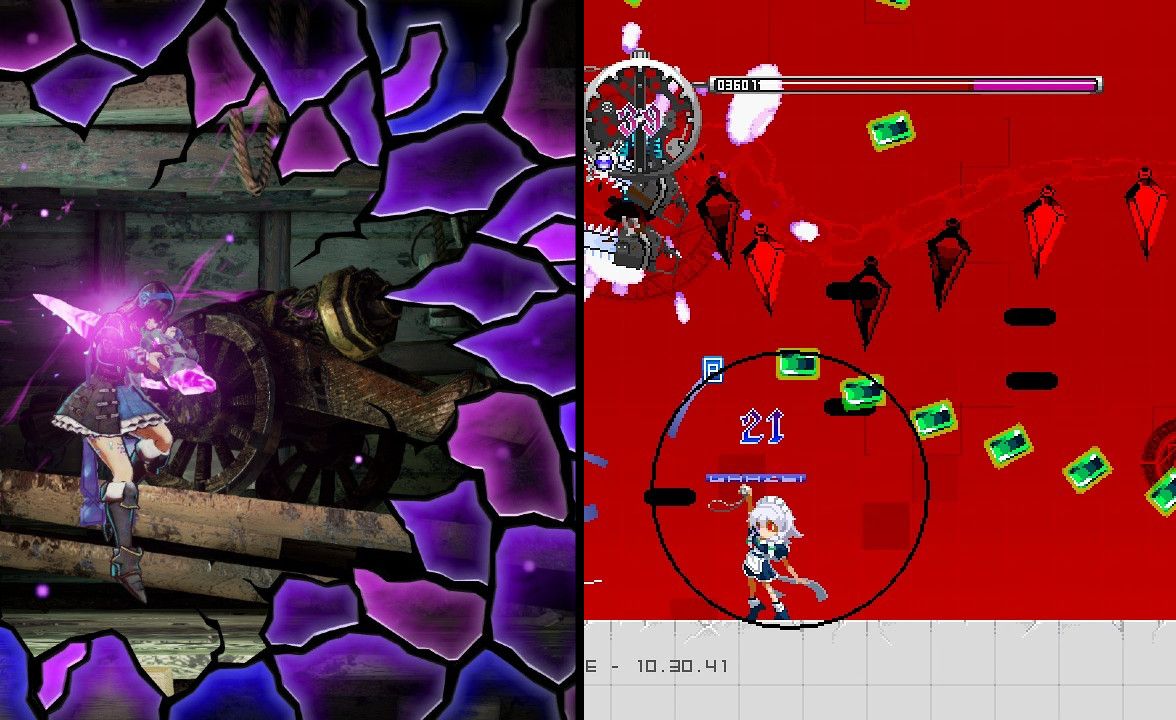 Bloodstained and Luna Nights both rely heavily on the unique powers of their respective protagonists, Miriam and Sakuya, and tie their most interesting mechanics into those powers. In Bloodstained, Miriam can absorb shards from demons and wield their nefarious powers against them, as well as upgrade these abilities through alchemy or defeating more of the source enemy. In Luna Nights, Sakuya manipulates time and uses a variant of Touhou’s signature graze mechanic to keep her MP topped off as she platforms and fights her way through the false world Remilia constructed for her.

Both games give the player leeway to explore these powers to the fullest, but Luna Nights achieves a far greater level of gameplay integration with Sakuya’s eternal clock than Bloodstained manages with the shards. This is likely because Bloodstained had to balance around many special movesets, while Luna Nights was able to focus on making the timestopping the best it could possibly be. Each level is designed to have a new type of obstacle that interacts differently with Sakuya’s stopped time, and even the extra knife upgrades she gets are at times tied into her Eternal Clock – such as the Grip Knives that allow her to create her own platforms by throwing a knife and stopping time. 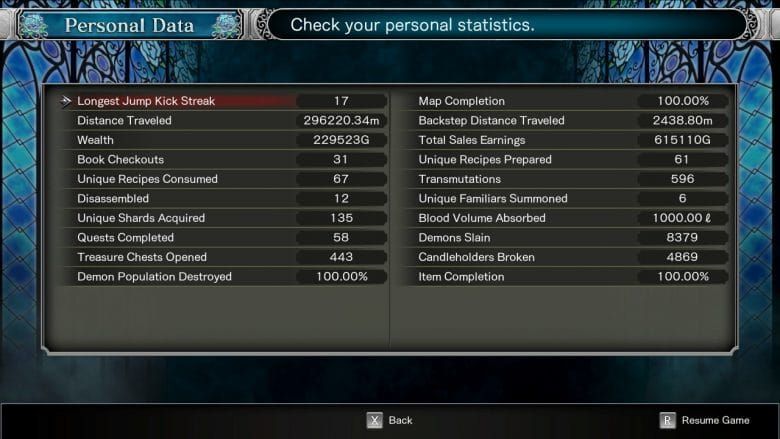 While the steady stream of weapons, meals, and equippables worked somewhat against Bloodstained in the Mechanics segment, here they work in its favor. Bloodstained has everything a completionist dreams of, from a demon compendium to a stats page that lets you know in detail how close you are to that sweet 100%. While Sakuya will always be sticking to her iconic throwing knives as a primary means of attack, Miriam isn’t bound by any such conventions, and players can try the game over and over while attempting to use only certain varieties of weapons to keep the experience fresh.

Since Bloodstained also has multiple difficulty levels and a higher degree of spells to experiment with when compared to Luna Nights, it’s much more desirable for those who want a slightly different experience every time they go back for a second helping of the game. Both games have a Boss Rush mode and plenty of achievements to make completionists tear their hair out, but Bloodstained is just a bigger production.

Bloodstained wins this category for those who want multiple ways to play their games.

Since both games have a Boss Rush mode, it’s only fair to compare the main attractions of these modes. Embodying the levels they’re defeated in, bosses cap off new segments of a metroidvania and more often than not test the patience of everyone involved. Bloodstained doesn’t disappoint on that classic Castlevania boss feel of dodging and waiting out enemy attacks, carefully spacing each spammable burst of magic out to where it’s safe. And Luna Nights, despite not being a bullet hell itself, is still styled after Touhou with all the brilliant colors and patterns the boss attacks entail. 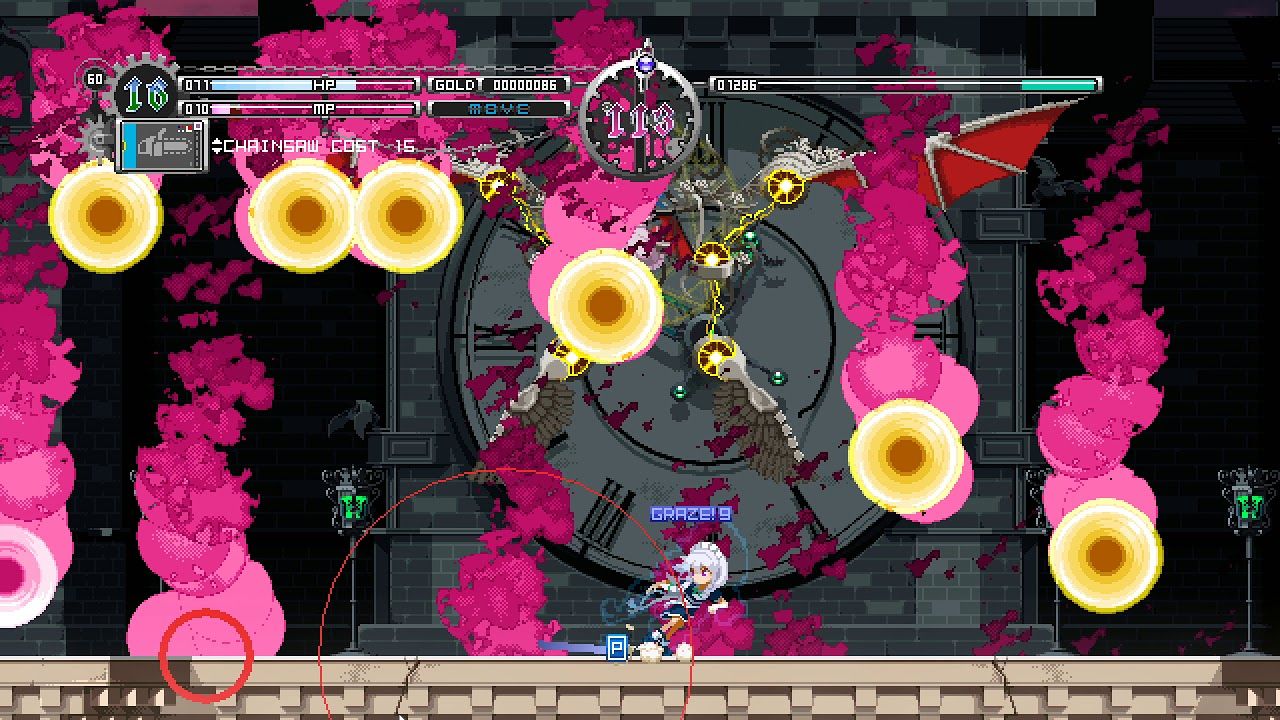 Determining a winner in this category may depend more on what you expect out of a boss fight. Climactic brawls set to raging orchestral music where any hit can spell your demise are king in the ultra-dramatic Bloodstained. Back and forth bullet exchanges and a rigorous test of all the new movement options and obstacle types presented take the cake in Luna Nights. Once again, the fact that Miriam has access to so many optional abilities and weapons severely limits Bloodstained’s ability to have hard and fast gimmicks for boss fights. As a result, they don’t often test Miriam’s full arsenal the way the Touhou cast tests Sakuya’s full range of movement and sense of timing – while being eye candy to boot.

Luna Nights wins out for style as well as stage-to-boss cohesiveness.

Ultimately, both of these games are excellent metroidvanias, with Bloodstained embodying the classic with a twist and Luna Nights providing a fresh take with some Touhou mechanics. But if you had the choice between the two, and you aren’t a diehard Castlevania fan? Pick up Luna Nights.

NEXT: Dynamax Adventure Pokemon Have An Incredibly High Chance Of Being Shiny