I didn’t grow up with Studio Ghibli as many people did. The first Ghibli film I watched was during a screening as part of my film degree, so I had to hit it with quite an analytical mind. All this is to say, while I appreciate the childlike wonder and fantasy many Ghibli films exude, that’s not really what I love about them. What I love about these films more than anything is the way they depict utterly normal and mundane parts of life – I’m a heartless bastard, I know.

Ocean Waves, the undervalued and unappreciated straight to TV film made by some of Ghibli’s younger animators is my favourite Ghibli film, and I think you should all watch it. Not only does it excellently portray the dramas and intensity of moments that appear extraordinary at the time but turn out to be standard growing up fare upon reflection, it also has some great queer undertones running just below the surface. 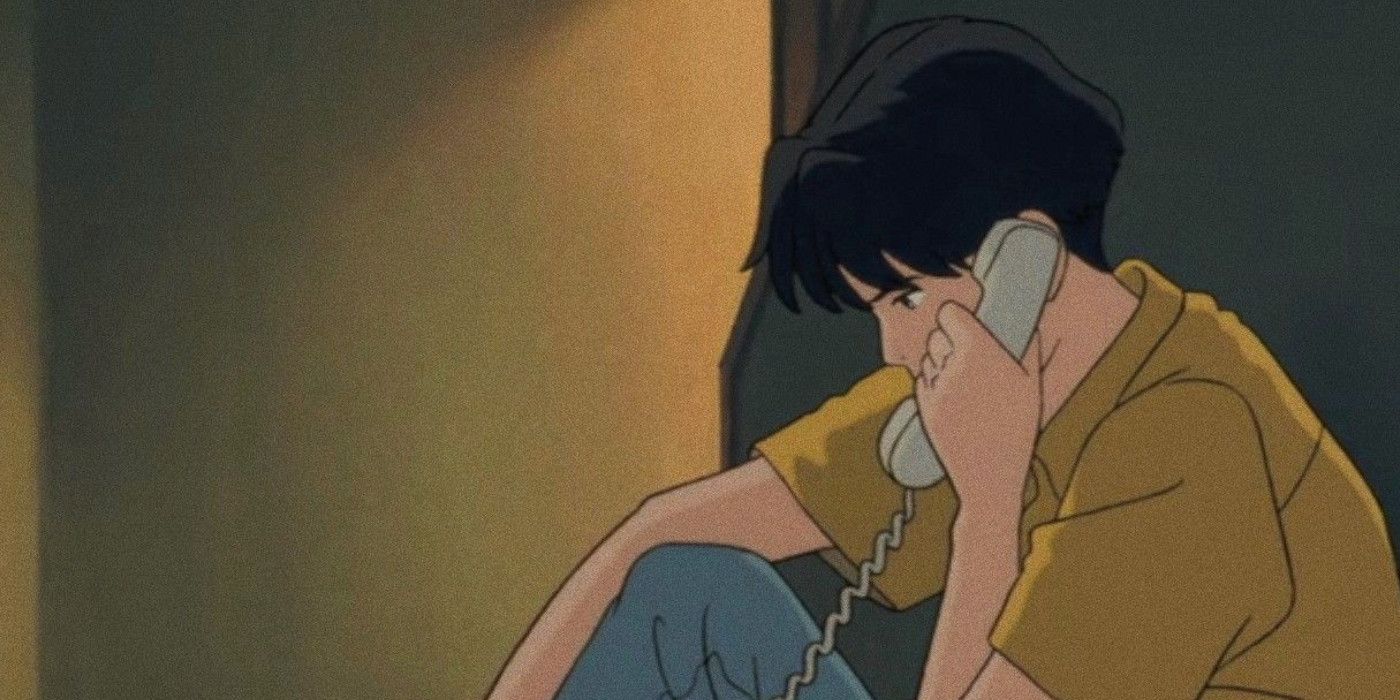 Ocean Waves tells the story of a high school love triangle between teenage best friends Taku and Yutaka, and a new girl from Tokyo, Rikako. The story is told via flashbacks, narrated by Taku – who is now in college – as he flies home for a high school reunion. This gives the film a wistful perspective that is lacking in some of Ghibli’s child protagonists. And even though this may not be an intentionally queer film, people recreate Ghibli films all the time, so why can’t I reimagine this as a queer love story?

Instead of a film all about two boys fawning over a girl, they appear far more interested in each other than Rikako. Taku often begrudgingly gets involved in her life, but it’s more out of a sense of chivalry than any particular romantic interest. At the start of the film, Taku receives a call from Yutaka while he’s at work washing dishes, asking him to see him after his shift. He immediately unties his apron and rushes to meet him. This is the kind of moment normally expected between love interests, not friends. He clearly cares deeply about Yutaka if he’s willing to blow off work so quickly just to see him. 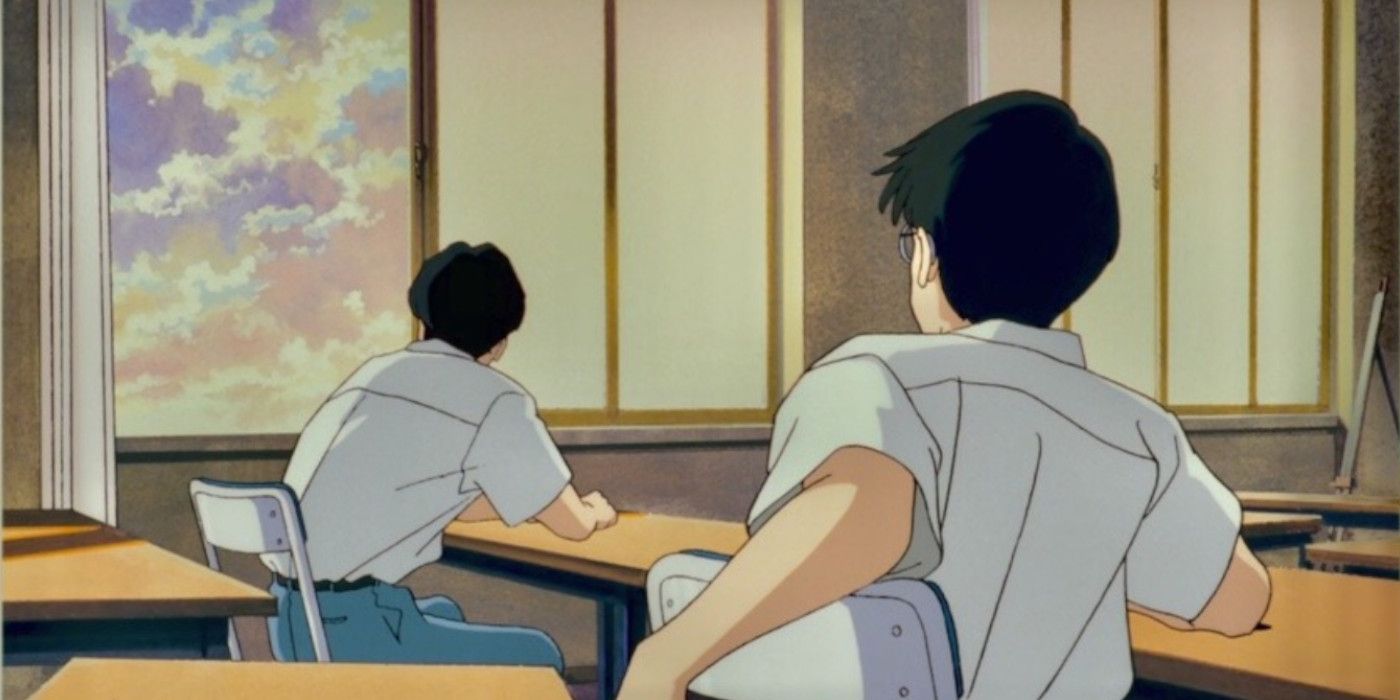 Outside of the potential queer love blossoming, I love this scene because of how real the place Taku is working seems. As he rushes off, his manager calls out to him, but he ignores her. A chef prepares fish with a scowl on his face, and grumbles under his breath, “you can’t rely on kids”, as the fish lands on the chopping board with a heavy thud. There’s another chef squatting outside and smoking a cigarette on his break, who blankly stares off into the distance as Taku gets his bike. For a film that barely runs over an hour, this kind of detail comprises a lot of the film and makes everything seem more alive – it highlights that although the drama of the love triangle might feel all-consuming to the kids, life still very much carries on around it.

As older Taku narrates, he claims, “I always thought of Yutaka a bit differently than my other friends.” It’s clear throughout the film that he cares how Yutaka sees him, as he keeps most of his encounters with Rikako a secret. He knows that Yutaka is into her, and narrates, “I felt unreasonably irritated to know that Yutaka was interested in Rikako, I thought she’d never see his real value.” If all this doesn’t scream that he’s actually in love with Yutaka himself then I don’t know what to tell you. Just look at the pictures in this article, there’s big gay energy in these stills – they’re always staring off into the pink sky together. 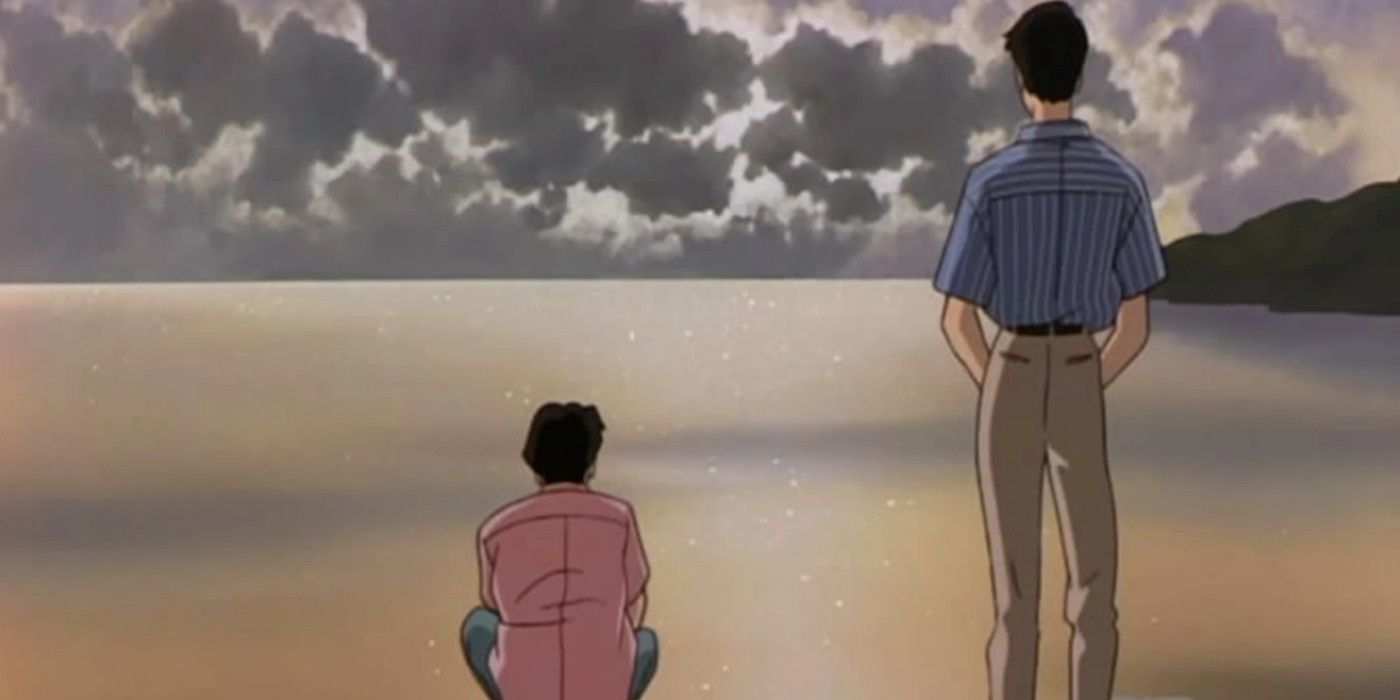 Eventually, Taku and Yutaka have a fight and fall out. They don’t speak to each other for the rest of school and eventually go their separate ways. This kind of big friendship breakup only feels believable if you believe they have feelings for each other, which I do. Plenty of friends fight and make up, but that’s a lot harder to do when you’re in love with someone and those feelings get in the way.

As an older Taku lands back home, Yutaka pulls up beside him and offers to drive him home. The pair chat and catch up. As Taku watches Yutaka drive, he seems to focus on his arms and hands, a shot that both suggests a longing for their touch and a remembrance of Yutaka’s punch. They make up and as Taku leaves the car the pair seem to dance around the idea of hanging out for a bit. Taku invites Yutaka in, but he refuses, he says he’ll call him. Taku asks him to go for a walk and Yutaka looks a bit shocked, but Taku’s sweet smile is too damn cute to turn down. The pair go for a sunset stroll along the pier as romantic music plays. It’s here that Taku’s infatuation for Rikako is revealed, and Yutaka says, “I know you were holding back because of me.” What isn’t clear is exactly how he was holding back. Was he holding back on Rikako to protect his friend, or was he holding back because he also had feelings for Yutaka? I wish they’d have just kissed, but it wasn’t meant to be.

Ocean Waves holds a very special place in my heart, more so than the Ghibli classics. It was an experimental film given to the youngest members of Studio Ghibli so they could try their hand at making a film. It went over budget and behind schedule, and didn’t see a stateside release until 2016. A melancholic yet hopeful, unintentionally queer film, it makes the mundane beautiful and captures the dramatic spirit of our teenage years. I don’t believe the film tried to make Taku queer, but that queerness is there, just under the waves, in the surf lapping against the pier.