As technology nudges the fantasy of games toward photorealism and unquestionable physics, Nintendo remains committed to more timeless pleasures. That translates to the simple joy of Kirby inhaling 74 characters in Smash Bros., the cel-shaded grandeur of Breath of the Wild, and the out-of-the-box (or made-of-a-box) cardboard activities of Labo, which nods to Japan’s long tradition of handicraft and art.

Nintendo creatives clearly treasure the latter possibilities. The company’s latest title, Yoshi’s Crafted World, adapts Labo’s follow-the-instructions experience to actual gameplay, constructing a paint-by-numbers platformer out of cardboard, woodwork, bamboo, and washi paper. The DIY art direction beams with card-cut clouds, hand-painted backdrops, and vehicles made of the contents of a junk drawer, and ultimately permeates the logic of each level’s puzzles. Like an Ikea build, a player can do a mostly good job — collect some sunflowers, find a prized red coin or two, move on to the next stage, “win” — but the scolding power of Crafted World’s pre-level instructions and post-level scorecard guilt me into perfectionism. For some, it’ll feel like a chore; to others, a provoking challenge of adulthood. For kids, Yoshi’s Crafted World may even be educational.

Like other Yoshi titles, including 2015’s yarn-spun Yoshi’s Woolly World, the new game finds our adorable little reptile friend collecting coins and avoiding Shy Guys to foil Kamek and Baby Bowser’s diabolical plan. Say what you will about low-stakes Nintendo adventures: I will always sit through cutscenes of Yoshis cooing about stolen gems, or whatever. Less enjoyable is the lethargic pacing of the play, which finds our hero bouncing from level to level on the Yoshi World stage board without creating any momentum or direction for what one should do in a given moment. Yoshi’s Crafted World plods along steadily, but the feeling that a giant boss battle or a mini-challenge could be coming around the corner is uneven in the moment. 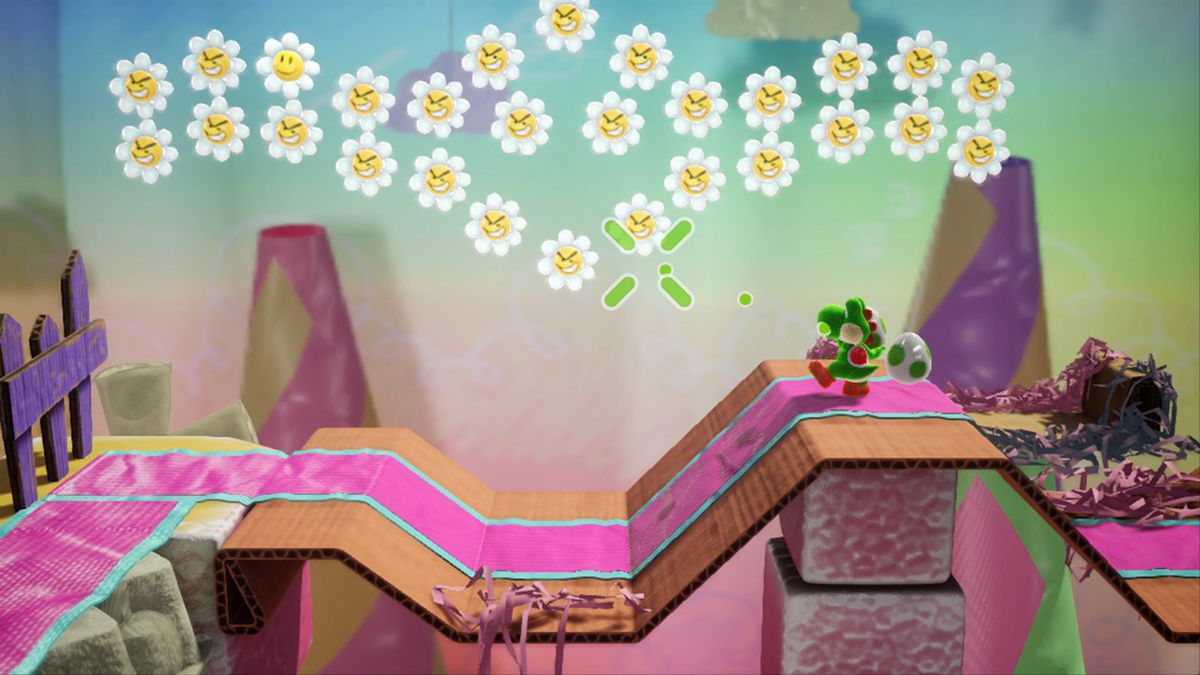 Though the scraps-and-glue details of the sets soften from large-screen Switch experience to handheld, the popping colors and unexpected layers of Crafted World are a draw no matter how one plays. Yoshi’s quest takes him to the old west, the decks of pirate ships, the jungle, above the clouds, and many more locales, each level consistent with the DIY directive, where a red Solo cup can become just about anything. Built on the Unreal Engine, the crew at Good-Feel also open up these 2D worlds into 3D, even as Yoshi sticks to a predetermined path; doorways, revolving walls, and perpendicular track allows the lil’ stinker to move along the Z-axis, while players will need to egg shoot up, down, across the screen, and into the horizon to hit all their marks.

Each stage in Crafted World has its own try-and-try-again puzzles that will either kill me or force a replay. Luckily, there’s Yoshi’s patented flutter kick, a cathartic alternative to swift, repeated death, as well as an armory full of wearables that can be purchased with gold coins to protect from piranha plant bite. Since one of the level end goals is health-based, the idea that losing even one heart will impact my score becomes especially anxiety-inducing, and one of Crafted World’s delightfully wicked undercurrents. The challenges emphasize defensive tactics, delicate movement, and playing by all the rules. There’s no going back if I miss a sunflower or lose a heart at the finishing line. It’s easy to run out of eggs at just the wrong moment — and the unreliable aiming mechanism during timed shootouts is even more infuriating). If you’re a perfectionist, plan on abandoning levels halfway through and starting all over again.

(And if you suffer from what I call the “Skyrim disease” of needing to grab every available item in proximity, regardless of logical worth, prepare to lose valuable time and resources chucking eggs at cardboard cows and hidden Shy Guy perched in the distance, simply because they were there and could be destroyed for coins and prizes later on.) 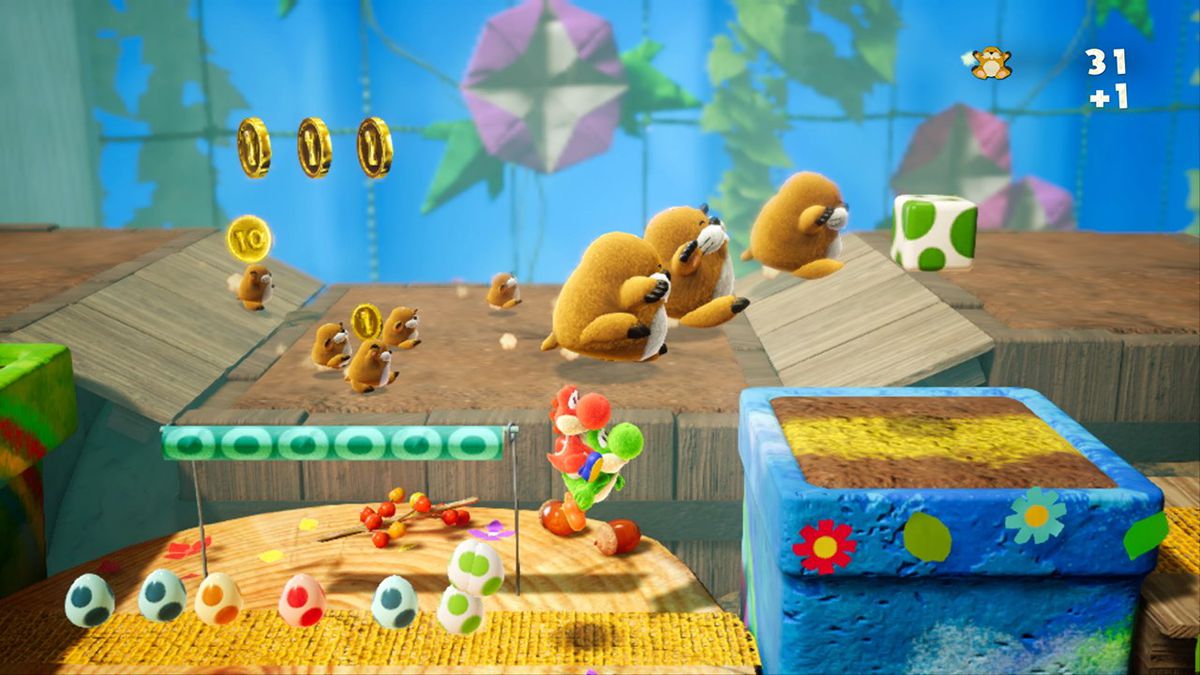 There’s little cohesion in Yoshi’s Crafted World, but plenty of busywork. Each level offers a flipped-screen version of the course in which Yoshi must track down three Poochy pups — a neat design trick that’s mostly spinning wheels as far as play is concerned. One-off stages that break the mold are always welcome: Players will control a giant, punching Yoshi machine, fly a balloon-popping airplane, and executing a level obscured by a shōji screen before it’s all said and done. Boss fights are the rummaging-through-a-messy-toolbox-for-the-right-screwdriver-head of the construction job.

Yoshi’s Crafted World is so easy-going, yet so devious at times, that the pressure of each scenario. The dinky-dink soundtrack loops and loops and loops so endlessly that listening to a bunch of podcast talking heads dissect the Mueller report memo might be more soothing than Nintendo’s gleeful Muzak. The co-op mode, which allows one player’s Yoshi to carry the other, or both Yoshis to run in opposite directions until the players get divorced, fails to activate any new side of the game.

This all feels by design. Yoshi’s Crafted World reminds me, in a way, of Sierra’s The Incredible Machine series. In those games, players needed to understand mechanics, size up the situation, piece together simple machines, and execute. By channeling Labo’s construction spirit into the long-standing conventions of a Yoshi game, Crafted World’s carved out a similar work-play functionality. I’m not always having fun, but I want to get it right. Yoshi’s counting on me.