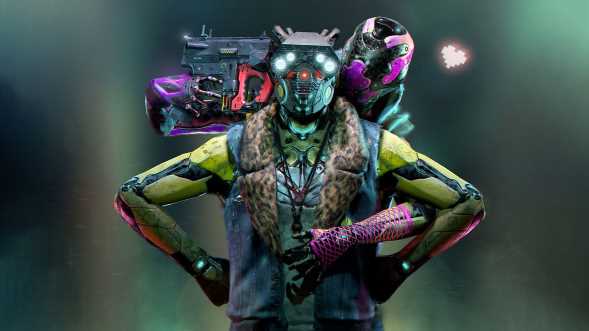 Space Pirate Trainer (2017) is getting a truly massive expansion next month on the Oculus Quest platform that will bring two new modes including the previously revealed Arena mode, which requires a sizable playspace. Belgium-based developers I-Illusions hopes it will give users “a glimpse at the future of VR.”

The update brings two new multiplayer modes, one of which is called ‘VERSUS’. Versus lets two players compete in a modified version of the classic solo version of Space Pirate Trainer, but with a gameplay twist that’s a bit like a game of tug-of-war. Every time you shoot a droid another one will spawn to attack your opponent.

The most substantial update coming to SPT DX is undoubtedly the new Arena mode though, which requires a 32 × 32ft (10 × 10m) playspace. Five levels are included at launch, and it can either be played online with a friend or in the same physical space. Here’s a (very) brief look at some gameplay:

Arena mode is slated to include mechanics that won’t allow competitors to walk through through walls, and also keeps people from physically bumping into one another. There’s also a single-player mode here as well to help users bone up on their arena skills by letting you hunt autonomous drones.

We’re waiting to share more, but for now I-Illusions released a few new screenshots of Arena: Back in 2016, I-Illusions bet on consumer VR with Space Pirate Trainer. With Arena, the studio is adjusting its scope to a time when more and more people own VR headsets—or more specifically, Oculus Quests. The studio says SPT DX aims to give users “a glimpse at the future of VR.”

“In the process of creating Arena, we had to come up with a whole bunch of original solutions for problems that arise with 1-to-1 movement-based gameplay. Let’s hope these set the bar for future similar experiences,” said project lead Dirk Van Welden. “In a lot of ways, this feels similar to releasing Space Pirate Trainer back in 2016. Back then we didn’t know if people would go out and buy a VR headset. There are a lot of Quests out there now, but we’re asking those people to find a safe 10 × 10m spot to play Arena.”

That 10 × 10m required playspace is about half the size of a tennis or basketball court, so it’s not unreasonable to think two players might meet up for a virtual shootout at their local gym. We’ll be going hands-on soon, so make sure to check back closer to the September 9th launch date.

Since the update requires untethered play, the original single-player Space Pirate Trainer will remain available for $15 across Steam, the Oculus PC Store, PlayStation Store and Microsoft.