Here is some straight-up WTFery as what to do about Telltale Games’ back catalog continues to be an issue for digital marketplaces. On Xbox 360, Minecraft: Story Mode has its individual episodes listed for $99.99 each. That’s right, a hundy.

There’s actually a good reason for this, but first, yes that price is meant to deter people from buying it. And yes, your credit card will be charged $99.99 if you attempt to, just to see what happens.

Per Mojang (or whomever is handling this game’s Facebook account now) the jam-up is because removing the episodes from sale meant players who had already bought the game could no longer download (or redownload) their remaining episodes. “The only solution to this situation is to re-list the downloadable content for purchase,” they write.

Ergo, “To deter new purchases, they will be re-listed at a very high price!” No kidding. “The price shown is a real list price, please do not buy the content, if you do, you will be charged the amount shown.”

We checked in on the Xbox 360 digital storefront this afternoon and, yep, Mojang ain’t messing around here. Their prices really are crazy! There were 13 episodes in all (eight in Season 1, five for Season 2) so there’s potential to spend more than 20 times what this stuff originally went for. 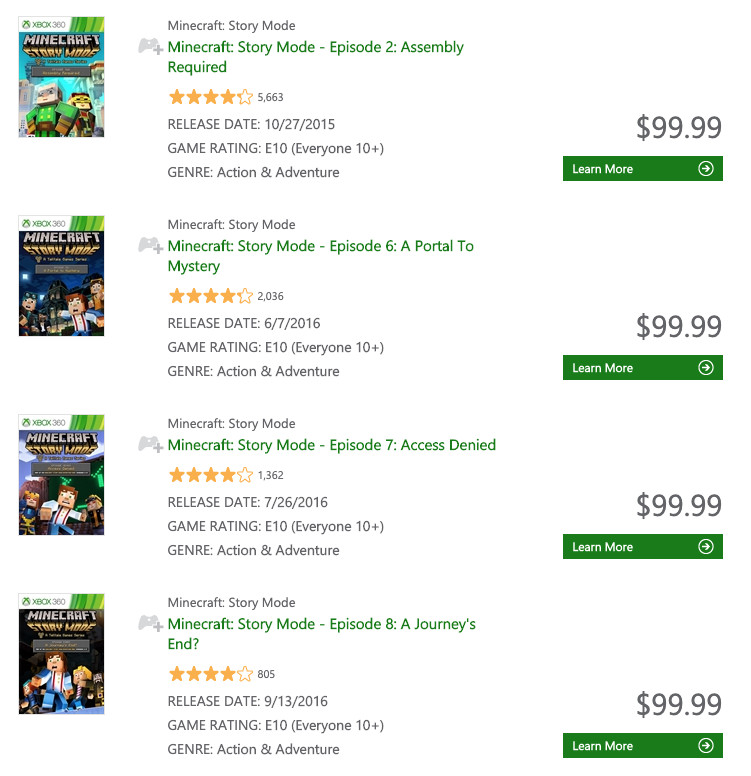 This is not a permanent deal (or lack thereof). Back on May 31, Mojang announced that Minecraft: Story Mode would no longer be supported as of June 25, and that sales have been discontinued. Players have until then to get all of their episodes to their device before that shutdown happens.

So, after June 25, the $99.99 episodes will come off the Xbox 360 marketplace for good, and will be unavailable to anyone, whether they bought the game already or not.

Jonathan Stauder, a former director at Telltale, pointed out how bizarre all this is in a Tweet on Friday. Indeed it is. This appears to be the only game affected; Tales from the Borderlands has all of its episodes removed, whereas Batman: The Telltale Series still has episodes listed (for the much more reasonable price of $4.99).

Telltale Games shut down in September 2018; at the end of May, GOG.com announced that the studio’s catalog there would be removed, taking licensed collaborations like The Wolf Among Us, Guardians of the Galaxy and Batman: The Enemy Within offline — however those who purchased these games will still have them in their library.